Harvey Weinstein's evil genius playbook: How he got LGBT people to support one of the year's most controversial films 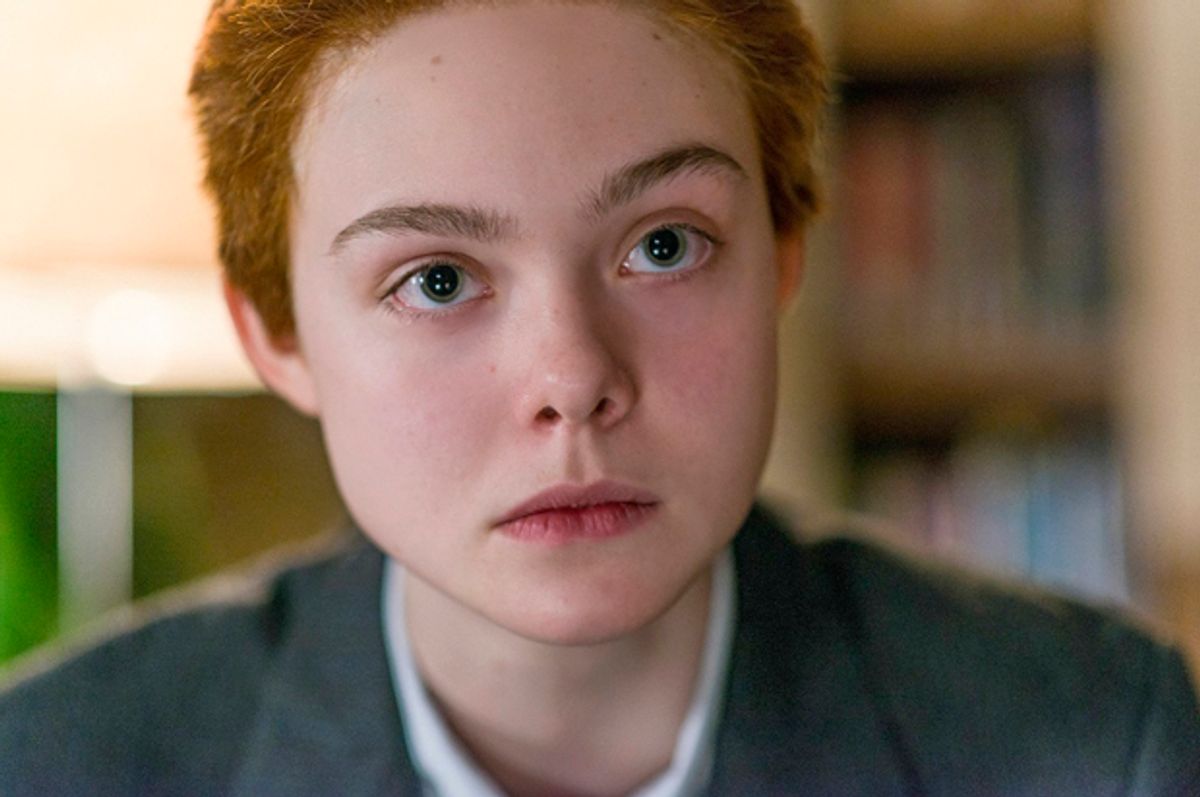 Update: April 27: The Weinstein Company and the Motion Picture Association of America came to an agreement today. The film "3 Generations" will receive a PG-13 rating.

Harvey Weinstein is the devil, but he might also be the most brilliant man alive.

The mega-producer behind era-defining indie smashes like “Pulp Fiction” and “Sex, Lies and Videotape” has lobbied the Motion Picture Association of America to review its R rating for the soon-to-be-released “3 Generations,” a transgender drama starring Elle Fanning (“The Neon Demon”) as a teen who comes out to his Jewish family. Weinstein penned an op-ed for Deadline on Tuesday in which he claimed that restricting the film to viewers 17 and older would prevent “3 Generations” from being seen by LGBT teenagers and their parents, who could benefit from the film’s core message of inclusivity.

Weinstein wrote, “‘3 Generations’ is an important story — not just as a vehicle of representation, but also as a genuine and heartfelt portrait of the contemporary family.” He added, “It was so important to everybody on the project that when teenagers see the film, they’ll relate to it as a kind of ‘snapshot’ of their lives. It’s funny and heartbreaking, joyful and sad — but most importantly, real.”

Susan Sarandon, who co-stars in the film, has called the rating “ridiculous,” while GLAAD president Sarah Kate Ellis referred to it as “dangerous.” Ellis wrote in Variety that the association’s decision “sends the message that something about being transgender is somehow not appropriate for children.”

The Motion Picture Association has a very bad and totally indefensible history of stigmatizing films with LGBT content by restricting them from being screened by general audiences. When “G.B.F.,” a comedy about a pair of gay students who strive to be accepted by the popular girls’ clique at their high school, debuted in January 2014, the film was slapped with an R rating. The harmless, frothy satire is nothing you wouldn’t see on a fairly average episode of ABC’s gay teen sitcom “The Real O’Neals.” In response, director Darren Stein (“Jawbreaker”) took the Draconian ratings board to task for its nonsensical “double standards” on queer sexuality. Stein wrote on Facebook that “G.B.F” earned its R rating from the association “For Homosexual References” or “Too Many Scenes of Gay Teens Kissing.”

This has been a problem for years. As Kirby Dick’s great documentary about the industry groiup points out, the lesbian conversion therapy comedy “But I’m a Cheerleader” originally nabbed an NC-17 rating for scenes involving masturbation and a discussion about oral sex. “The ratings board said you weren’t allowed to talk about a girl having oral sex with a girl,” director Jamie Babbit later told The Huffington Post. Films like “Love Is Strange,” starring Alfred Molina and John Lithgow as a gay couple whose marriage is tested after one is fired from his job for being in a same-sex relationship, and the British comedy “Pride” have faced the same issues.

The Motion Picture Association drastically needs to overhaul its absurd and unfair policies, which stigmatize not only depictions of LGBT life but also women experiencing sexual pleasure. For instance, if a movie shows a man getting a blow job, that gets an R rating. But if a woman is depicted as receiving oral sex, that apparently merits the deadly NC-17 — which destroys a film’s chances at wide distribution. Many theaters won’t run movies with the stigmatized rating.

But with all due respect, that’s not what’s happening here.

As Rich Juzwiak pointed out in Jezebel, “3 Generations” wasn’t chided for its earnest depiction of the struggles that transgender teens go through. While the similarly themed “Ma Vie en Rose” was handed an extremely questionable R rating 18 years ago, the association’s problem with the Gaby Dellal-directed film was that the characters drop the dreaded “F-bomb” too often. Juzwiak counted five uses of the verboten word in the 2015 cut of the film, comparable with the tally for other R-rated films like “As Good as It Gets” and “Romy and Michelle’s High School Reunion.” Usually a PG-13 film can skate by with one or two uses of “fuck,” but five is pushing it.

Weinstein, who has been at this game for three decades, knows the trade association’s policies on swear words. This was the case six years ago when the makers of “The King’s Speech” successfully appealed its R rating after removing three of the five “F-bombs” in that movie, an identical number to those in “3 Generations.” Weinstein was also that film's executive producer.

Nikole Beckwith, a co-writer on “3 Generations,” told Juzwiak the problem is “not unfixable.” Said Beckwith: “Fucks are easy to take out.”

It’s telling that Weinstein has not announced whether the film will be edited to meet the industry association’s threshold for swearing. The Weinstein Company, which is set to release “3 Generations” on May 5, also hasn’t filed for an official repeal from the ratings board. That’s because this fight likely has nothing to do with the association’s bizarre, outdated politics. It has everything to do with avoiding the persistent controversy that for years has dogged the indie film — which was originally slated to come out in 2015.

Dellal’s film “3 Generations” initially debuted two years ago at the Toronto Film Festival, where it was met with a lukewarm reception from critics and an extremely hostile one from the transgender community. The well-meaning production was criticized as yet another instance of a cisgender actor being cast in a trans part, a phenomenon that is often referred to as “transface.” Recent examples with this casting practice include films like “Dallas Buyers Club,” “The Danish Girl,” and the upcoming Matt Bomer drama “Anything,” in which male actors slap on a wig and a dress to embody the lived experiences of trans people. These actors earn awards and praise, while transgender talent remains widely shut out of an industry that refuses to give trans actors a chance to tell their stories.

As Jen Richards, who stars in the YouTube series “Her Story,” argued in a series of tweets, casting trans actors in trans roles doesn't only allow for more authentic portrayals of LGBT lives. Having a cisgender male actor like Jared Leto or Eddie Redmayne play a transgender woman encourages the audience to misgender trans people and misunderstand what it means to be trans, unconsciously associating the gender of the actor with the person he or she is  playing.

“The world sees that being a trans woman is just a man performing,” Richards wrote last year.  “It will result in violence against trans women. And that is not hyperbole, I mean it literally. Cis men playing trans women leads to death.”

These are important, pivotal questions about how to appropriately represent trans narratives — ones that “3 Generations” has fumbled badly. When addressing the casting controversy  in 2015, Dellal repeatedly referred to the film’s main character, Ray, as a “girl.” Although the director walked that back in a recent interview with Bustle by claiming she was actually talking about Fanning as an actress and not her character, that appears to be little more than a sly bit of retconning. Dellal even specified during the earlier exchange that she had been talking about the “part” itself.

“The part is a girl and she is a girl who is presenting in a very ineffectual way as a boy,” the director told Refinery29. “She’s not pretending to have a deeper voice. She’s just a girl who is being herself and is chasing the opportunity to start hormone treatment.”

The Weinstein Company, realizing that its film was a rotting albatross, flapped that dead bird in the air for nearly two years while its staff figured out what to do with it. The movie was originally slated to debut in theaters in September 2015 — back when it was called “About Ray” — but was recut and rebooted with a new title and a new poster. The fresh marketing materials, which hit the web last month, deemphasized Ray’s story in favor of spinning the film as a multigenerational saga of a modern family. The poster for “3 Generations” now reads, “In this family, change is relative.”

Selling the once-maligned movie as an underdog fighting the bureaucrats of the Motion Picture Association is smart PR, and it’s been sensationally effective. In one hell of a coup, Weinstein got the trans community to back a film that its members once protested. This is as savvy as it is disingenuous.

Blair Durkee, a transgender student at Clemson University in South Carolina, created a Change.org petition passionately pleading with the association to reconsider the R rating, writing that a movie like “3 Generations” would have helped her when she had been struggling to come to terms with her identity. The Williams Institute, a pro-LGBT think tank at the University of California, Los Angeles, estimated this year that 150,000 young people in the U.S., ages 13 to 17, identify as transgender, and Durkee says that the fact that they can’t buy a ticket to the movie without an adult chaperone “breaks [her] heart.”

“This is a story about them, being denied to them, simply because the MPAA — which sets the ratings — doesn’t know what to do with the subject matter,” Durkee wrote. “This story could give hope. This story could change lives.”

Durkee is absolutely right about the potential impact of telling LGBT stories. Transgender youth need more films and television shows that reflect their experiences in an affirming, positive way, but the needs of vulnerable teens shouldn’t be used as a bargaining chip by an extremely talented huckster who wants to get people to see his movie. In his Deadline op-ed, Weinstein claimed that he’s “been accused of being a heat-seeking publicity missile when it comes to the MPAA” but that he doesn’t protest their decisions “unless the recommended rating will impact the accessibility of a socially important film.”

Well, at least one of those things is accurate.