“Lipstick on a pig”: Texas anti-LGBT bill would also target veterans, women and the elderly

New bathroom bill might sound more neutral, but it still would override local laws protecting many types of people 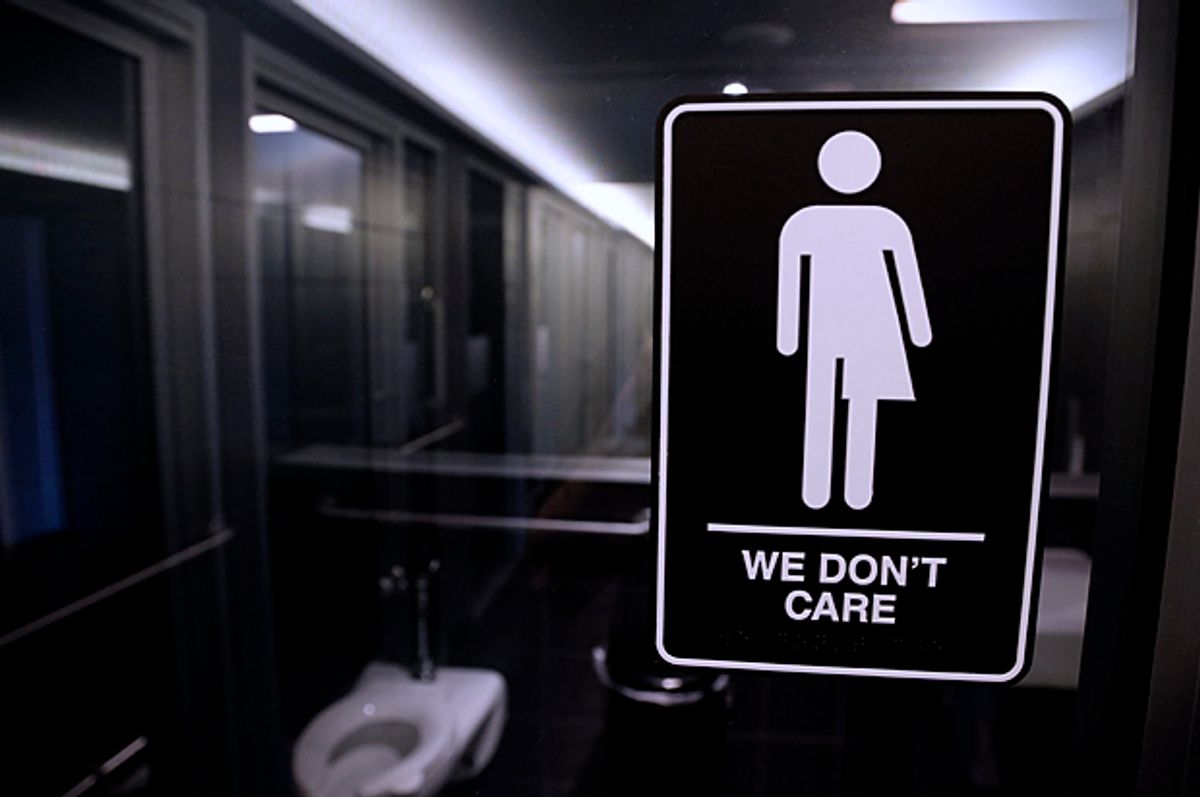 Don’t believe the hype: Texas’ latest anti-LGBT legislation is just as bad as the old bill.

That’s what LGBT advocates argue after Republican lawmakers in the state’s General Assembly put forward House Bill 2899, a proposed replacement for Texas’ soon-to-be-defeated bathroom bill. Senate Bill 6, which would prevent transgender people from using restrooms that correspond with their gender identity, gained little traction in the House of Representatives after Speaker Joe Straus opposed the measure, calling it “unnecessary.” Straus warned that — similar to the effect of North Carolina’s identical House Bill 2 — it would lead to a pricey backlash in the Lone Star State.

The Texas Association of Business has claimed the proposed legislation could cost the state $8.5 billion, although that exact figure has been called into question.

The author of HB 2899, Rep. Ron Simmons, claims that the bill is intended to “strike a balance” between business interests and conservative groups that say that further action is necessary to protect the privacy of women and children in public restrooms. Byron Cook, the House State Affairs Committee's chairman, came out against the previous bathroom proposal but has endorsed HB 2899. Gov. Greg Abbott even called Simmons’ bill “thoughtful.”

But Chuck Smith, the CEO of Equality Texas, argued that HB 2899 is “even worse” than the previous legislation.

The new proposal is what’s known as a “statewide pre-emption bill,” Smith explained. Similar to laws passed in Tennessee and Arkansas, HB 2899 would prevent local legislatures from passing trans-inclusive nondiscrimination protections. Those laws offer equal access for transgender people to all accommodations, which include restaurants, city parks, museums and public restrooms. The new law, if passed, would also strike down existing protections in cities like Dallas, Plano, Fort Worth, Austin and San Antonio — nullifying the right of trans people to use the bathroom that corresponds with their gender identity.

“The other bill, as bad as it is, is limited to government facilities and schools,” Smith said. “HB 2899 would apply to all restroom facilities statewide.”

What’s notable about HB 2899 is that it never specifically names the LGBT community. The legislation, which is similar to the “compromise” bill recently put forward to strike down North Carolina’s law, is more about what’s not in the measure than what's in it. The proposal states that “a political subdivision, including a public school district, may not enforce an order, ordinance, or other measure to protect a class of persons from discrimination to the extent that the order, ordinance, or other measure regulates access to multiple-occupancy restrooms, showers, or changing facilities.”

This prevents local legislatures and municipalities from offering additional protections to any class of people not specifically named in federal laws. The Civil Rights Act of 1964 spells out ​that people should not be discriminated against on the basis of ​race, sex and national origin.

In addition to offering benefits to the LGBT community, Texas cities have extended nondiscrimination protections to a number of groups not covered by the federal definition of discrimination. The city councils of Fort Worth and Austin have both cited age as a protected category in their civil rights ordinances, meaning that elderly people are shielded from bias in nursing homes and other facilities. San Antonio offers similar protections for military veterans, which helps strengthen their ability to obtain care from medical providers.

This is a persistent problem in Republican efforts to roll back LGBT rights in Texas. When voters struck down the Houston Equal Rights Ordinance in 2015 following a successful right-wing propaganda campaign that painted trans bathroom access as a danger to women and children, that repeal didn’t just affect queer and trans people. It also hurt single mothers and people with disabilities, groups that had been protected under that law.

These are the same types of people that could be harmed again, by HB 2899. Jenny Pizer, the policy director for Lambda Legal, said although the bill appears to be “neutral,” the new legislation amounts to “putting lipstick on a pig.”

Pizer argued, “On the face of this new bill, it’s not discriminatory.” She added, “But make no mistake: This is an anti-LGBT bill. The purpose of this proposed bill is to block local protections, permit the exclusion of transgender people from public facilities, and ensure the state is less subject to legal challenges and boycotts. It’s the same toxic wine in another bottle.”

Although HB 2899 would be bad for all Texans, it would especially target trans people already singled out by previous anti-LGBT efforts across the country. A recent survey showed that when state legislatures pass laws that open up trans citizens to scrutiny, it can have painful real-world effects. After interviewing more than 1,000 transgender people in its state in 2015, Equality Texas found that 9 percent had been blocked from using a public restroom in the past year. Sixty-one percent of those surveyed claimed that they completely avoided going to the bathroom in public places for fear that they will be beaten, harassed or even killed.

Lou Weaver, the transgender programs coordinator for Equality Texas, said that nothing about SB 2899 will address the real problem facing LGBT Texans in public restrooms: the violence and discrimination that trans people experience every day.

“My state is saying I’m not worthy,” said Weaver, a transgender man. “I’m different, and I don’t deserve the same equality as my peers do, my neighbors do, and the other people around me do. It takes an emotional toll on people — on myself, on others, and on the parents of trans youth — when we’re seen as the ‘other.’ We have seen the way that people talk about us and the look of disgust that some people look at us with. It’s really harmful.”

Weaver said that as a transgender person, it's already difficult to navigate public spaces. Although he said he isn’t “visibly trans,” he often wears a T-shirt that says “This Is What Trans Looks Like” when traveling to the airport or to speak in other cities. Since the state legislature first introduced SB 2899, Weaver has asked himself whether it’s safe to out himself in public in this way — or even whether it’s OK to go to the bathroom in certain places. He used to be able to navigate the world with a certain privilege, but the past year changed everything.

“I had jury duty recently, and if something like HB 2899 were on the books, what would I have to do in this government building as I do my civic duty?” Weaver asked. “How could I sit there for any length of time? It makes accessing public spaces impossible.”

HB 2899 is one of 21 anti-LGBT bills currently under consideration in the Texas General Assembly, which is meeting for the first time since the Supreme Court’s 2015 decision on marriage equality. (The legislature meets every other year.) Although the NFL warned Republican lawmakers about the consequences of passing the previous bill, no sporting leagues have spoken out against the new legislation. A lobbyist for the Dallas Cowboys, Bill Miller, told The Dallas Morning News that he intends to support HB 2899.

The repeal of North Carolina’s HB 2, which was universally condemned by LGBT groups, has given conservatives further hope that they can work with businesses and sporting associations to avoid backlash.

After North Carolina passed its replacement bill, House Bill 142, in March, both the NCAA and NBA announced that the state would again be considered for hosting championship games. Following the passage of HB 2, these sporting associations had announced boycotts of the state until the discriminatory law was struck down. The new legislation does little, however, to remedy the problems posed by the old law: North Carolina’s HB 142 prevents local legislatures from enacting ordinances to protect trans people until 2020. Even though transgender community will continue to be at risk, the NCAA claimed the March repeal met the “minimum requirements” for lifting the ban.

“These states are trying to see how much discrimination they can get away with,” Smith said.

Texas Republicans have until May, when the General Assembly wraps up its sessions until 2019, to pass a bathroom bill that satisfies the minimum bar set by the NBA, NCAA and NFL. It remains to be seen just how much bigotry these groups think is permissible.