"Dear White People," listen up: This is the conversation starter about race you've wanted 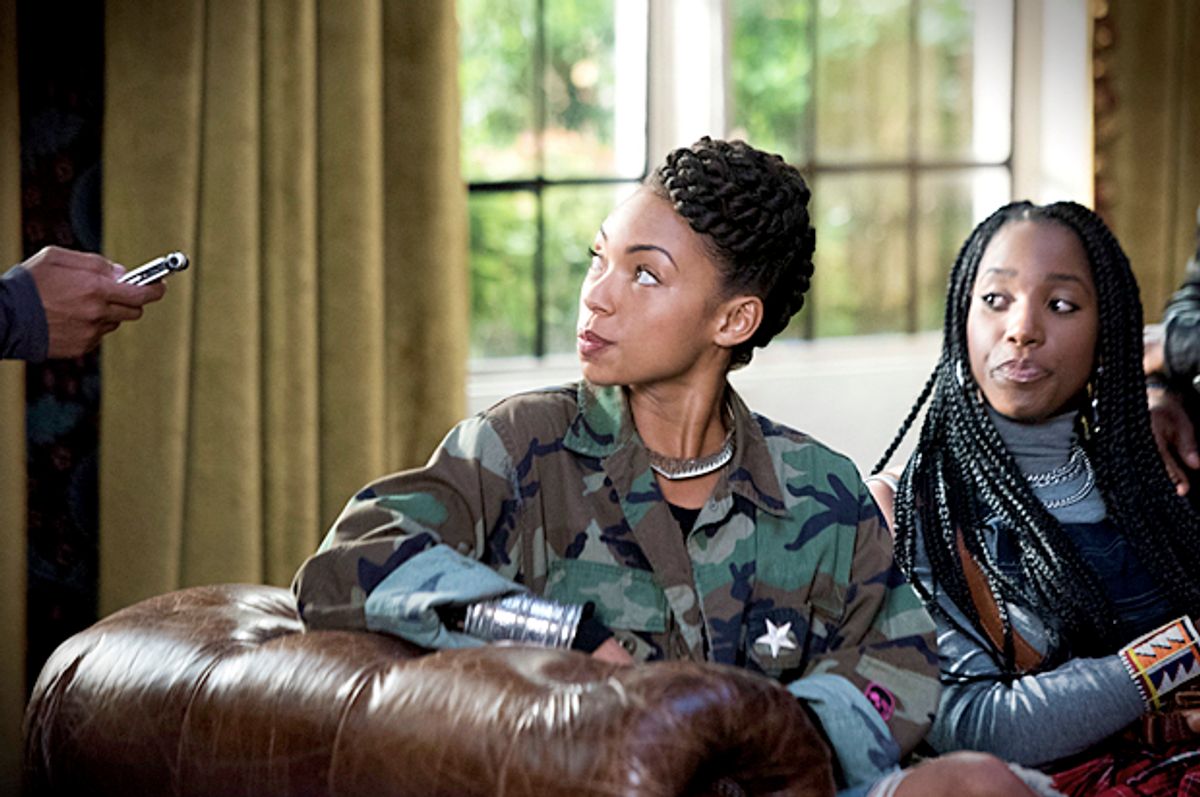 Whenever one person is anointed to speak for an entire minority group, that individual is shouldering an impossible load. Not heavy, not difficult, impossible. Yet people of color have that burden placed upon them regularly, especially these days. Nativism has been restored to a starring role on the national stage. Racially motivated hate crimes are on the rise. With increasing frequency white people have been seeking explanations, often gleaned by launching into uncomfortable conversations with their minority acquaintances.

And guess what? A lot of black, brown, Asian, queer, trans and gender nonconforming folks are tired of having to play the role of educator on top of navigating a daily sea of micro aggressions. While it’s true that we need to have honest conversations about race, we shouldn’t have to explain to people why it’s not OK to touch our hair, why “exotic” is not a compliment, why you still can’t say that word.

Netflix’s “Dear White People,” premiering on Friday, speaks to that frustration while also assuming some of the heavy lifting that people of color have to take on every day, all the time. And it does so in a way that satirizes the very concepts it is both elucidating and defending, starting with the moment Giancarlo Esposito’s unseen narrator kicks off the action with “The writers of this program are depending on my ethnic but nonthreatening voice to explain things they are too lazy to set up traditionally.”

Though the title has been falsely interpreted by the alt-right as a polemic against the privileged majority, it’s also misnomer. White people, this comedy isn’t expressly about you, although several time-honored college archetypes are prominently displayed. Binge drinking jocks? Self-involved elitists? A white girl named Muffy? These are a few of the Wonder Bread caricatures populating Winchester University, the fictional Ivy League setting for “Dear White People.”

This is a comedy of pride, prejudice and privilege as wielded by white undergraduates and their classmates of color that renounces any intention to head toward a "Kumbaya" moment or confirm the post-racial declaration that race is a construct. From a purely anthropological standpoint, that may be so. College, however, is a microcosm of the real world, where bigots hold positions of power. And one of its first lessons is that it's pointless to defy labels.

“Labels keep people in Florida from drinking Windex,” one character quips. “Trust me: Find your label.”

Insensitivity and cluelessness inform its humor, starting with scenes from a flabbergasting blackface party hosted by Winchester’s satirical magazine Pastiche, the school’s version of The Harvard Lampoon. A group of genuinely black students crash the party and, as one might guess, no peaceful resolution is achieved by Kendall Jenner offering one of them a Pepsi.

But the blackface party is the port from which “Dear White People” launches in a multitude of directions to dissect the passions, pressures and philosophies governing each marginalized character in a way that’s hilarious and heartbreaking, unpredictable and consistently funny.

Series creator Justin Simien introduced the comedy’s central characters in the 2014 independent film version of “Dear White People.”  His Netflix episodes recycle much of film’s plot and bring in several actors from the film to reprise their roles. Even some of the film’s dialogue pops up in scenes throughout the first season’s 10 episodes.

But while the series supposedly picks up where the film left off, “Dear White People” is really a do over that allows Simien and fellow executive producer and showrunner Yvette Lee Bowser the time and format to probe some of the film’s more engaging and underexplored components.

The theatrical release was weakened by the purposeful simplification of character development and thought-provoking subplots to serve a larger nebulous point about prejudice and the chutes-and-ladders nature of codified discrimination — whether committed by student organizations, an administration, misguided allies or by the black student population itself.

Where the series really shines is in its use of its established characters to tell the same story from an array of angles, informed by a medley of experiences.

Sam’s ex, Troy (Brandon P. Bell) is the dean’s son and lives in his father’s shadow. A burgeoning politician tasked by his father to be all things to all people, Troy assumes the role of speaking for everyone and offending as few as possible. Sam also has a comrade in arms, Reggie (Marque Richardson), who carries a torch for her and supports her take-no-prisoners approach.

On the other side of the spectrum is Colandrea "Coco" Conners (Antoinette Robertson), who has spent her life working to overcome the limitations society imposes as a result of her dark skin and her inner-city origins and would rather assimilate than agitate.

In the middle, belonging to no particular group or subgroup, is the introverted Lionel Higgins (DeRon Horton), the resident journalist whose multiple crimes against the popular perceptions of blackness include being skinny, averse to parties and sports, loving “Star Trek” and possibly being gay.

All the black students have been thrust into the same box — on Winchester's campus, it’s a dorm called the Armstrong-Parker House. But while most of their white, privileged classmates may view the black students as a cohesive like-minded unit, each of them internalizes the experience of the blackface party and day-to-day racism very specifically.

Many of the issues examined in “Dear White People” — the social signals conveyed through hairstyle, clothing choices and music preferences, to start — reflect the topics Spike Lee danced with 30 years ago in his musical comedy “School Daze.” This speaks to the the timelessness of its narratives and the depressing truth that society may never evolve past them.

Back then, no self-respecting black person wanted to be called a sellout. Today the battle is to be “woke” versus “not woke,” a constant refrain in “Dear White People” that defies clear definition. That appears to be the point Simien is making. As the series presents its characters with situations that test their identity politics, their devotion to social justice and the assertion of individuality over groupthink, it also pokes at the Sisyphean nature of disruption for its own sake.

As the show's black students often fall short in demonstrating that they can be loyal friends and crusaders, many of its white people are written with layers of emotional dimension as well.  John Patrick Amedori’s Gabe personifies the aggravation that can accompany a white person's struggle to be an ally in black spaces. Through him and others, “Dear White People” speaks to common questions with seriousness at some turns and farce in many others. When is a genuine effort to support seen as overstepping? Where is the fine line between sharing and appreciating versus stealing and appropriation?

“Dear White People” takes a stab at answering those questions and others while raising new ones throughout its fast-paced and zestful first season, ending on a note that begs for the story to continue into a second. Hopefully Netflix will extend it because this is the kind of show that can spark dialogue among acquaintances from a kind and informed place as opposed to one beset by fatigue and resignation. Because as frequently as public figures are called upon to remind the population at large that the African-American “community” is not a monolith, very few entertainment options demonstrate that pointed truth with the style of exuberant vitality that enlivens this show and its ideas.