In "The Newsroom," the long-running procedural depicts why workplace assault victims rarely come forth 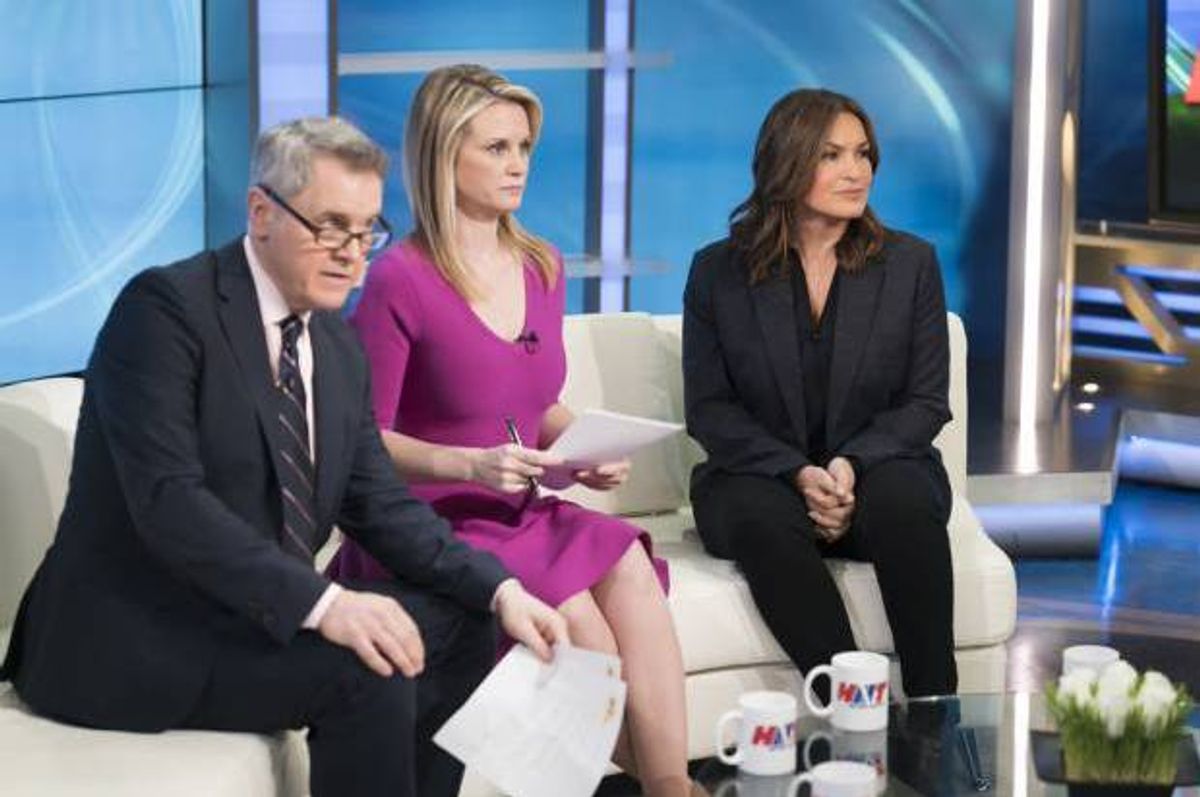 Many “Law & Order: Special Victims Unit” episodes open with this disclaimer that reads, "The following story is fictional and does not depict any actual person or event.” It is important that the audience understands this.

Otherwise Fox News management may have noticed a few curious similarities between its office culture and the work environment at the completely fabricated cable news channel HNT depicted on Wednesday night’s episode. HNT becomes the special victim unit’s top case when one of its anchors, Heidi Sorenson (Bonnie Somerville), accuses the head of the network of sexual assault.

This being a fictional story, albeit one ripped from the headlines, it could not possibly be referencing the disgraceful ouster of Roger Ailes following longtime anchor Gretchen Carlson’s game-changing sexual harassment lawsuit. Surely its debut wasn’t timed to take advantage of last week’s defenestration of Bill O’Reilly over the growing hill of harassment claims against him, either.

Wednesday’s episode, titled “The Newsroom,” bowed during the same 24-hour period during which the network announced that all employees, contributors and freelancers must undergo “a one-time, one-hour sensitivity training session.” Perhaps Fox’s supervisors will allow the viewing of the episode to count as homework.

Oh sure, “The Newsroom” does not officially depict what happened between Ailes and Carlson, or O’Reilly and god knows how many women who had to suffer through his gross windbaggery and exfoliation fantasies. Additionally Harold Coyle, HNT’s chief executive rapist, is played by Christopher McDonald, a decent actor who has built a career out of playing smug bastards and who bears no resemblance to a pile of discarded skin tags brought to life by dark sorcery.

But some “Law & Order: SVU” episodes achieve a special balance between salacious entertainment and minor public service, and “The Newsroom” is one of those. Whenever a public figure is accused of sexual assault by a crowd of women, trolls and people unclear on the concept of decency inevitably wonder aloud why the victims have taken so long to report the behavior to human resources or use their company’s presumably helpful and sensitive automated hotline.

Maybe they’ll comprehend Olivia Benson’s explanation at the top of the episode: Workplace sexual assault is one of the least reported crimes because the victims are afraid of not being believed or losing their jobs. That’s the part the writers really weren’t making up.

“The Newsroom” follows the basic structure of a typical “SVU” episode and, given what the public now knows about Fox’s work environment, the details of the case are entirely plausible. Detective Benson (Mariska Hargitay) appears on Sorenson’s show and bears witness as Sorenson is visibly triggered by an actress’s account of being sexually assaulted during a film’s production, which the director passed off as a love scene. (Coincidentally this story sounds like Maria Schneider’s gut punch of a bombshell regarding her treatment while filming “Last Tango in Paris,” but that’s an entirely different ripped-off headline.)

As the HNT program cuts to a commercial, Sorenson blurts out that her boss raped her but almost immediately retracts the allegation. She changes her tune after HNT terminates her contract, but once she goes public other female  former employees follow her lead.

“The Newsroom” is but one of several recent “SVU” episodes inspired by high-profile stories involving sexual harassment or assault, such as the Brock Turner rape case. There’s even a Donald Trump-inspired episode that was written and shot before he was elected president. For whatever reason, it has not yet aired.

Any challenged souls remaining in Ailes’ or O’Reilly’s or Trump’s camps may notice that in “SVU,” Coyle is accused of actual rape as opposed to the kind of nonconsensual spank and tickle that powerful men in the real world get away with. This is true to real life. “SVU” is a scripted prime-time drama. To boost viewers' level of disgust at the crime and create tangible evidence to serve the plot, Coyle — described by one of the characters as a “paranoid predator” — has also taped his exploitative interludes to ensure he would have leverage on his victims.

“SVU” tends to tie up its cases neatly by the end of the hour. Sorenson receives justice, using her sizable settlement to found a center dedicated to mentoring and empowering teen girls. Her former boss at HNT, Coyle, is on the hook to do 18 months of prison time. This is a far cry from the $40 million golden parachute Ailes received upon his departure from Fox.

More than any other detail, that one proves, without a doubt, that this "SVU" episode is indeed a work of fiction.