At least they love it for themselves: Trumpcare 2.0 would keep all the best aspects of the ACA — for Congress 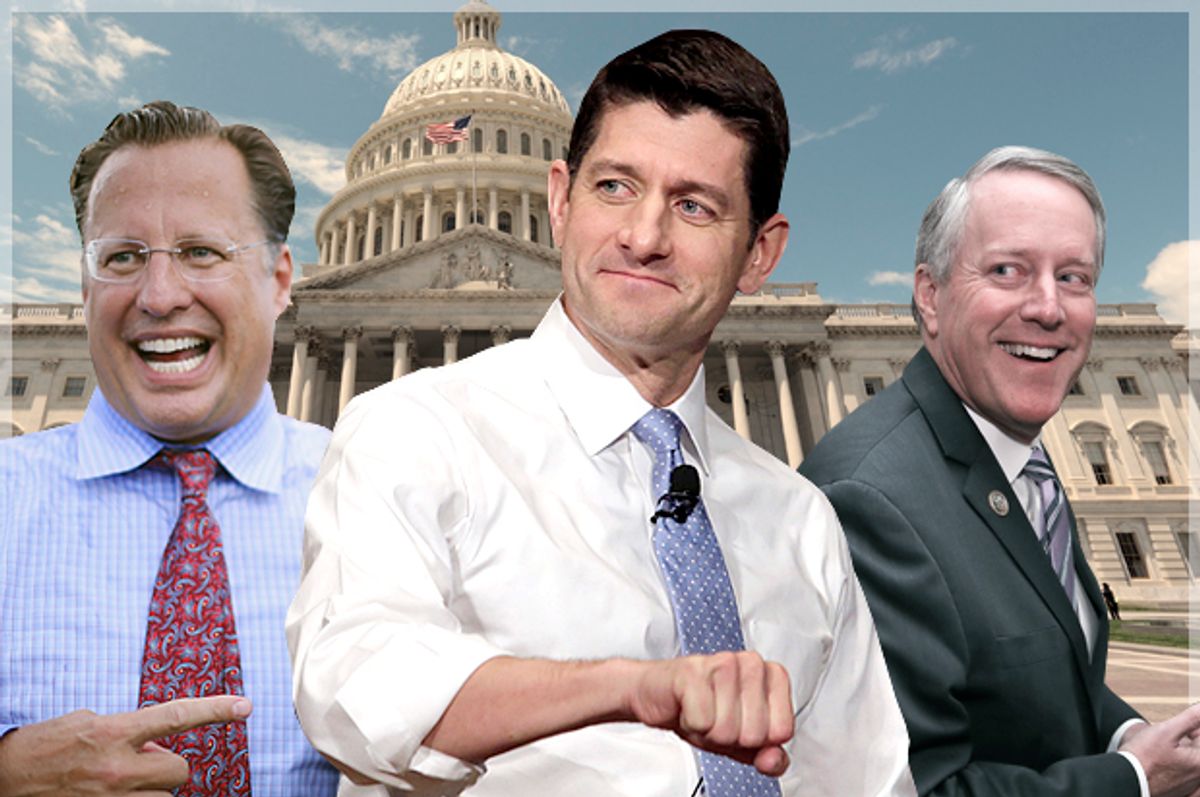 We learned this week that Trumpcare isn’t dead. In fact, members of the House Freedom Caucus have reportedly tossed their support behind yet another attempt to "repeal and replace" President Obama's Affordable Care Act. This comes after new language was inserted to allow states to opt out of covering essential health benefits, as well as a clause letting states withdraw from covering pre-existing conditions.

Trumpcare 2.0 will apparently also enable insurers to return to charging sick people unaffordable rates in “high risk pools,” pricing them out of their coverage. We also learned that an amendment was inserted into Trumpcare that would exempt members of Congress from the opt-out language. I’ll get back to that, but this isn't the first time we’ve heard about a congressional “exemption” concerning health care.

During the turbulent history of the Affordable Care Act, you’ve probably heard more than a few congressional Republicans shrieking about how Congress was "exempted" from Obamacare. The point of this lie was to suggest that the ACA was so awful and so ridiculous that the Obama administration offered Congress a waiver to avoid it. In GOP discourse, ordinary people should be exempted from this onerous system, too, so Republicans repeatedly passed repeal acts that President Obama was forced to veto.

It's difficult to encapsulate in any language, living or dead, the sheer intellectual violence of this lie. First of all, let’s rewind to the marathon health care reform debate of 2009 to 2010.

In an effort to flimflam the Democrats, Sen. Chuck Grassley, R-Iowa, proposed an amendment that would force members of Congress and congressional staffers to abandon the existing Federal Employees Health Benefits Plan and instead sign up for insurance policies via the ACA marketplaces (otherwise known as "exchanges") just like ordinary Americans. Again, the point was to illustrate the shoddy and undesirable nature of Obamacare: The idea was that Democrats would balk at this notion, thus undermining their pitch for how great the law will be. Instead, Democrats called Grassley's bluff and accepted the amendment.

So thanks to the Grassley amendment, if members of Congress and their staffers want employer-based insurance coverage as part of their salary, they have to buy health insurance through the marketplaces. Here's the problem, though. Like most employers, public or private, the federal government pays about 75 percent of the cost of the monthly premiums for its employees as a benefit. But when members of Congress and their aides were bumped over to the exchanges, they lost that premium-sharing benefit, which amounted to a significant pay cut, an especially brutal development for low-wage staffers.

During the summer of 2013, however, the Office of Personnel Management corrected the problem by creating a rule that allowed the government to cover 75 percent of the new ACA marketplace insurance premiums. As an employer, the government has the prerogative to do this, just as it would be the prerogative of Trader Joe's or Wal-Mart to offer the same benefit. But Republicans seized on the rule and twisted it around, telling the world it was "an exemption from Obamacare" for Congress. This was insane, especially since none of this would ever have happened if Grassley hadn't tried to score cheap political points by monkeying around with the health care reform law.

Here’s the next twist. It turns out that former House Speaker John Boehner worked extensively with then-Senate Majority Leader Harry Reid and other Democrats to re-establish the government premium subsidy for congressional workers and members. In fact, according to Politico, Boehner and Reid collaborated to schedule a secret meeting at the White House to convince President Barack Obama that it was important to re-establish this coverage. In the meantime, draft legislation was circulated that would have repealed the marketplace requirement for Congress, but it never got beyond the planning stage.

Eventually, pressure from congressional Democrats convinced Office of Personnel Management to allow the rule — the "exemption" — to be authorized. In other words, there is no congressional Obamacare "exemption," and there never was. In fact, members of Congress must buy insurance via the District of Columbia's Obamacare exchange if they want employer-based coverage — by law. And the rule that Boehner repeatedly tried to misrepresent as an "exemption" was a rule that he himself lobbied for, in cooperation with his supposed nemesis in the Senate.

So we have at least two layers of Republican lies here. The GOP congressmen who bitched endlessly about how Congress had exempted itself from the ACA were, in fact, required to have employer-based coverage through the exchanges — a feature of Obamacare they explicitly demanded. Years later, as they work to repeal and replace the ACA, they’re making sure they don’t lose the best aspects of Obamacare coverage.

All told, the Republicans want to repeal your ACA coverage while keeping all the best parts for themselves. That speaks volumes about how the GOP really feels about Obama's signature achievement, not to mention how Republican legislators feel about ordinary Americans' health and well-being.