He lost everything trying to reach the U.S. — and still has 1,000 miles to go 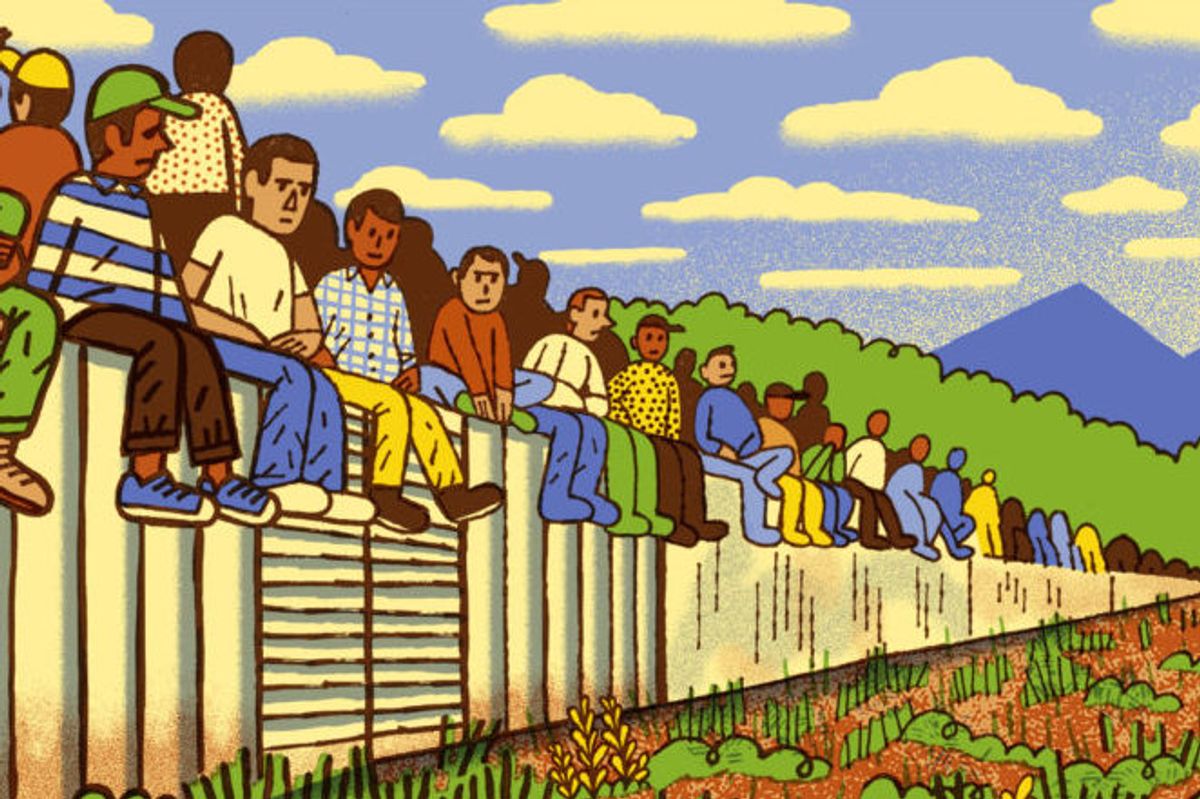 Twenty-three-year old Nelson stands in the middle of the kitchen at a shelter for migrants in the Western-Mexican city of Guadalajara. He’s wearing baggy blue jeans and a forest-green hoodie.  The bottom half of his head is shaved and the top is pulled back into a ponytail. As he shreds chicken, he jokes with the ladies, “My country may have its problems, but let it be known that Salvadoran men are masters in the art of cooking!” Everybody laughs. On the menu tonight is chicken stew, and rice and beans. Soon the men at the shelter will gather for this hearty meal before retiring for some much-needed sleep. Some will get up early in the morning and continue their journey north, but Nelson says he is not going anywhere just yet.

Read more Narratively: These Elderly DIY-ers Came to Peace With Death — By Crafting Their Own Coffins

Nelson, whose name has been changed here so he could speak freely about his migration experience, arrived in Guadalajara in the middle of the night a few weeks ago. He was penniless, shoeless, exhausted, and hungry after a month of travelling on top of the infamous freight train, La Bestia, and still over a thousand miles from his destination. He and thousands of other migrants from Central America risk their lives every year to ride the train from the southernmost border of Mexico all the way up to the northern border where they try to enter the United States.

Read more Narratively: I Was Taught to Hate My Lesbian Neighbors. They Took Me In Anyway.

Nelson was born and raised in one of the most drug-ridden, dangerous neighborhoods in San Salvador, the capital of El Salvador, a tiny country with one of the highest homicide rates in the world. In 2015, the year Nelson turned 21, killings peaked at 104 per 100,000 residents, the highest rate for any country not in open war that same year. The violence is driven by rival gangs who were boys themselves when they fled the Salvadoran civil war in the 1980s. They ended up in the United States, only to be sent back to El Salvador in the early 2000s when the era of mass deportations began. The men imported criminal tactics learned in the States to a country teeming with leftover weapons and struggling to overcome widespread poverty.

Read more Narratively: What It Feels Like to Hold the First 60 Seconds of a New Life in My Hands

Nelson never knew his father, and his mother died when he was eighteen. After that, he lived on his own and worked as a mechanic. One day, soon after he turned 23, he was walking home from work when three men with the signature tattoos of the MS-13 gang approached him. “They asked me to kill someone and join the gang,” he says. “I said no, but when I got inside my apartment and locked the door I was shaking because I knew that saying no to the gangs is not an option.”

His fear was well founded. The gang members started a campaign of harassment, calling him at all hours of the day and night, following him to and from work, and continuing to press with their request for him to commit murder. “They told me if I did not kill someone for them, then they would kill me.”

Terrified, Nelson changed his address three times and his phone number twice, but they still managed to find him. “They are a chain that is linked across the country,” he says. “Wherever you go, whatever you do, they will find you. The only way to escape is to leave.”

So, he left. Early one morning he kissed his girlfriend goodbye and set out with nothing but a backpack containing some food, money and an extra pair of shoes. He took buses and walked through El Salvador and Guatemala, sleeping in the mountains and overpasses.

Once he reached the Mexican border, taking buses was no longer an option. When Central American migrants enter Mexico, they are considered illegal, and if they’re caught by authorities they are immediately kicked out of the country. Frequent ID checks on buses mean there is only one way for them to travel: La Bestia. Migrants climb to the top of the train and huddle together to protect each other from the elements and the danger of falling off.

“As soon as we crossed the border from Guatemala into Arriaga, Chiapas, I was robbed,” says Nelson. “There were about forty of us riding on top of the train, and ten men with guns climbed up top and robbed us all. They kidnapped some of the guys, but I managed to jump off of the train and run away. They had taken everything though, including both pairs of my shoes and my backpack.”

“This is often the most dangerous area to pass through on the train,” says Janet Valverde, the coordinator at the migrant shelter in Guadalajara, called FM4 Paso Libre. “Many people from organized crime groups wait right at the border to exploit migrants as soon as they enter Mexico. Here they face the risk of being robbed, raped and forced into human trafficking. Often times the Mexican authorities are also involved in these human rights violations.”

Nelson had no choice but to continue on, barefoot and destitute. “I survived on the kindness of women who stand by the tracks and hand bags of food to migrants as the train passes their villages,” he says. “It was mostly cans of tuna, bread, and sodas.” But for every act of kindness there was also one of hostility. There is a stigma against Central American migrants in Mexico because some Mexicans claim that migrants from El Salvador, Guatemala, and Honduras who travel through Mexico towards the States often get caught trying to enter the U.S., and instead of being sent back to their own countries, they remain in Mexican border towns where they become involved in organized crime. “There were often men who would stand by the tracks and throw big rocks and insults at us as we passed by,” says Nelson.

In Oaxaca, Nelson was traveling with a group of three other Salvadorans when one of them fell off of the train while he was sleeping. “We saw the train rip both of his legs off,” says Nelson. “We climbed down and jumped off as fast as we could, and took him to the closest clinic. Then we had to continue on. After I saw that happen, I wouldn’t let myself fall asleep on the train.”

This is one of the many reasons most migrants report an extreme level of exhaustion upon arrival at the shelter in Guadalajara. The act of trying to stay awake to avoid falling off the train often also ironically results in accidents due to sleep deprivation: it’s a torturous loop of damned if you do and damned if you don’t.

“Between four hundred and six hundred migrants pass through FM4 Paso Libre every month,” says Valverde. “Most of them stay a day or two, just long enough to get a shower, a couple of hot meals and some sleep. They are not here to linger. They are chasing the American dream.”

Some of these men have financial assistance from family members, so they can pay someone to smuggle them at least part of the way, but young men like Nelson have no option but the train. The shelter is working to change this. They are helping migrants like Nelson apply for a humanitarian pass that will permit them to legally take buses in Mexico for one month. That way, they can avoid the nightmare of La Bestia. The process can take up to a few months, but Nelson is willing to wait.

“I’m too scared to get back on the train,” he says. While he waits, he has found a job washing cars. He works eleven hours a day, six days a week. He pushes up the sleeves of his sweatshirt to reveal arms that are covered in red, chafed skin and burns. “Once I get my papers I am going to travel to Baja California by bus and then head to Los Angeles. I heard there is work there, and lots of Salvadorans. If I get caught trying to cross the border then I will just stay in Tijuana, but I will never, ever go back to El Salvador.”