100 days of Sean Spicer: The White House's press strategy is more sinister than you think 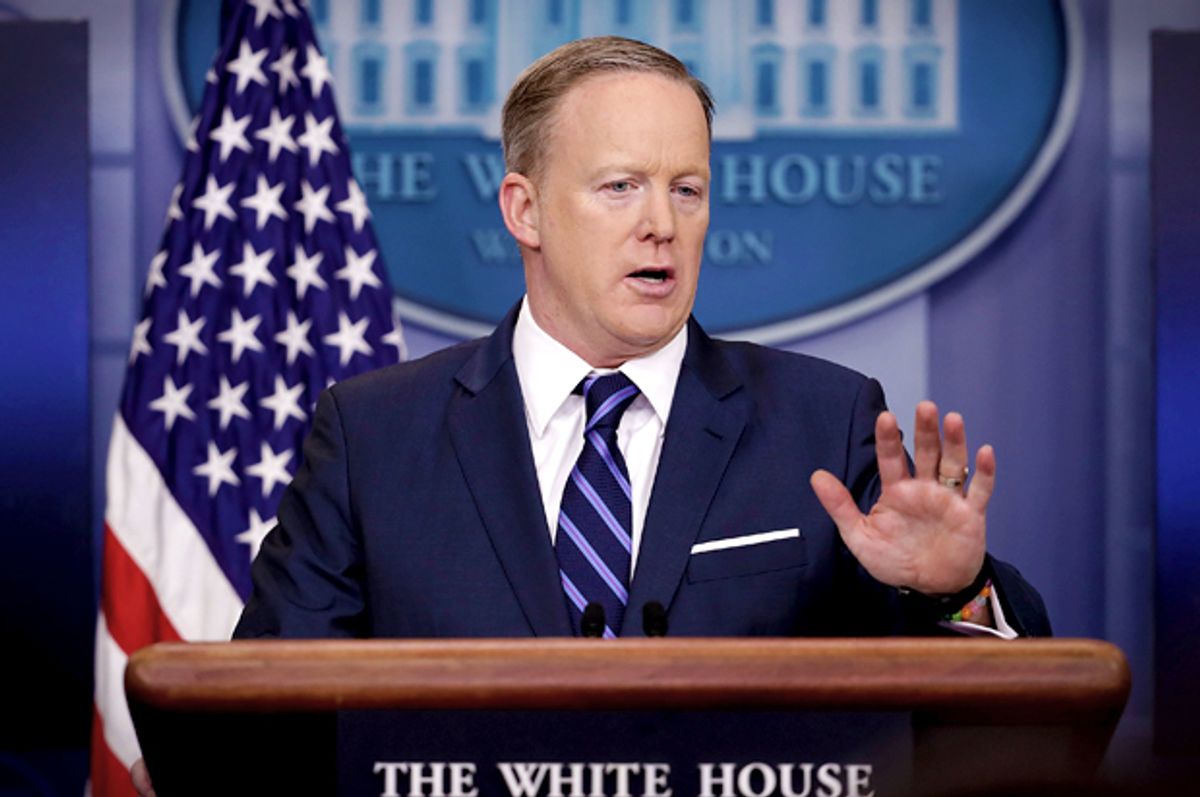 It would be fair to say that White House press secretary Sean Spicer has yet to get through one week without a major gaffe. In fact from the very moment that he began his job, Spicer has left former press secretaries scratching their heads in confusion.

Recall that Spicer used his first briefing to insist that Donald Trump's inauguration as president had drawn the largest crowds in history — “period.” He then chastised the press for biased reporting and closed by refusing to take questions from the journalists present. That behavior led former White House press secretary Ari Fleischer, who had served in the administration of President George W. Bush, to tweet that he was “uncomfortable and concerned” by Spicer’s first presser.

And that was only the beginning. Spicer alternates between offering the White House press corps gibberish, outright lies and propaganda. He consistently has trouble pronouncing words. He often can barely contain his utter contempt and restrain his anger toward his counterparts.

And that’s not even touching on his bizarre references to Adolf Hitler as a moderate and to concentration camps as “Holocaust centers.”

Now as we finish off the final stretch of President Donald Trump’s first 100 days, many of us have been wondering why Spicer still has a job. He is not only an embarrassment to our nation; he has actually tarnished the reputation of a president who has no trouble looking like a fool all by himself.

Back when Melissa McCarthy first did her scathing impression of Spicer for “Saturday Night Live,” there were rumors that the impersonation had so thoroughly humiliated Trump that he considered firing Spicer. Politico reported, “More than being lampooned as a press secretary who makes up facts, it was Spicer’s portrayal by a woman that was most problematic in the president’s eyes, according to sources close to him.”

But we now know why Trump has no plans to replace Spicer and that's because he is doing exactly what Trump wants him to do. Spicer isn’t fighting with the news; he’s redefining it.

As The Washington Post reported, when Trump was asked last month whether he had plans to dismiss Spicer, the president’s response was unequivocal. “I’m not firing Sean Spicer,” he said, according to someone familiar with the encounter. “That guy gets great ratings. Everyone tunes in.” The Post then explained that Trump even likened Spicer’s daily news briefings to a daytime soap opera, noting proudly that his press secretary attracted nearly as many viewers as one would.

As GQ put it, Trump is keeping Spicer for the “dumbest, Trumpiest reason ever.”

While there is little question that the decision to retain Spicer is a classic Trump move, it is a mistake to read this as dumb. It is all part of a larger strategy used by Trump and his team since well before the election.

From Kellyanne Conway to Spicer, what Trump has amassed are not neutral conduits for his platform and policy. What he has done is create an entertaining cast. Each one of the characters has his or her own role on the show.

They don’t just report the story; they are the story.

In the early days when Conway appeared on CNN or Spicer held a briefing, it was tempting to read their combative attitudes and arsenal of alt-facts as signs of the way that Trump wanted to wage war on a free press. But this is not the typical sparring that goes on between a White House administration and the press reporting on it.

I heard one suggestion from a Washington insider that it often seems like Spicer is performing for Trump, that Trump is his target audience. But now in light of Trump’s comments about Spicer’s ratings, that view seems wrong as well.

Trump isn’t the audience; he is the studio exec. We have been referring to Trump as the first reality-TV president, but have we really been processing what that means for the press?

There have been multiple signs that Trump is not simply delusional, bombastic and megalomaniacal. Trump may have those traits to alarming degrees, but they aren’t exactly new characteristics for a world leader. It is worth remembering, too, that President Ronald Reagan had his own media celebrity. So Trump isn’t the first “actor” we have elected either.

What is new is that Trump and his team don’t recognize the difference between entertainment media and news, between political rallies and press conferences, or between the subject of a news story and the one telling the story. They literally have no clue what a free press is or does. For them, the news is simply about ratings. It is media writ large, absent any notion of what journalism can and should be.

This explains why Trump could boast about how his appearance on CBS' “Face the Nation” had the highest ratings since the World Trade Center came down. Referring to the CBS political news program as “Deface the Nation,” Trump managed to disrespect the news and a national tragedy at the same time. Trump brags constantly that his appearances on news media pop ratings at the same time that he takes shots at what he calls our “fake media.”

While we can all agree that our news media could be better, the contempt and disrespect that Trump has for the actual news and the obsession he has with ratings tell us that he truly has no idea what purpose a free press serves.

This also explains why Trump doesn’t treat supporters as citizens or constituents. He sees them as fans of his show or perhaps as consumers of the Trump brand.

We have had signs all along that Trump doesn’t really “get” what a democracy is or understand how our particular democracy works. Just before the inauguration he didn’t even seem to appreciate the role the president has in upholding the Constitution — a fact that likely leads directly to not understanding the role of a free press.

This of course explains why the White House has decided to boycott the White House Correspondents' Dinner, which will be held later on Saturday and plans to hold a political rally in Pennsylvania instead.

The idea isn’t only to disrupt a longstanding tradition. No president has missed the event since the 1970s. Trump and his team plan to upstage it and literally displace it with their own event.

Even George W. Bush attended the White House Correspondents' Dinner each year he was in office. Don’t forget that Bush endured one of the most significant comedic roasts in our nation’s history when Stephen Colbert mocked him to his face in 2006. Word was he didn’t enjoy the evening at all, but he still showed up the next year.

Also noteworthy was what happened when Trump attended the dinner in 2011. He was repeatedly mocked and teased by then-President Barack Obama, as well as by Seth Meyers, who later wondered if his mocking of Trump explained why Trump decided to run for office.

Of course the White House Correspondents’ Dinner isn’t without its flaws. The event (often called the “nerd prom”) has been criticized for playing up glitz and privilege and highlighting the D.C. elite.

But it is also the one event that celebrates the unique role of a White House press corps that has the ability to keep a daily watch on what is happening in the executive branch. With offices inside the White House, these journalists are among the few in the world to have inside access to government. The practice has been part of our nation's history since 1914.

But all that is about to change as Trump and his entire staff completely blow off the event.

Trump’s decision to avoid the event is more than a sign of his thin-skinned narcissism. It is proof that Trump aims to totally destabilize the press and undercut it in every way possible. How else to explain a president's judging the success of his press secretary by his “ratings"?

This is why journalists have had such a difficult time engaging with Spicer and why memes of his pressers are legion.

Back when former Bush press secretary Fleischer was astonished by Spicer’s behavior on Day One, he still expected Spicer to work within the traditional confines of the job. As Fleischer then explained, “On Monday, Sean is going to be accountable. Sean is going to stand in front of the press and he's going to take questions. He'll either be able to back up what he said and justify it or he'll be pilloried.”

Spicer did nothing of the sort. He was pilloried, but he didn’t care. He responds to questions by yelling. Or as Trevor Noah has pointed out, he treats journalists like kindergarteners. If the goal is ratings not credibility, then that explains why it seems that Spicer heads out each day trying to create another scandal or confrontation. If the goal is to pull viewers away from a soap opera to watch a presser, then we need more drama not less.

Colbert keyed into this exact idea in his spoof of Spicer’s soap opera style, calling it "The Bold and the Babbling."

Spicer’s weird attitude toward the press has confounded members of the media, but luckily it hasn’t thrown off the satirists who have consistently been the only ones to nail exactly what's wrong with Spicer. From McCarthy to Colbert and Noah, the comedians have called out Spicer’s infantile, hostile and incomprehensible behavior.

In her first rendition of Spicer, McCarthy opened her parody with slightly exaggerated aggression, “I came out here to punch you in the face!” She then ended her bit saying, “Spicy’s gotta go bye-bye right now. I need a big-boy nap. I will be woken up exactly one minute before tomorrow's press conference.”

It was a brilliant spoof of how little regard the Trump team has for the idea of informing the press. And it was a perfect reminder that Spicy does indeed need a nap.