Divine drama: "American Gods" answers our prayers for a show worthy of worship 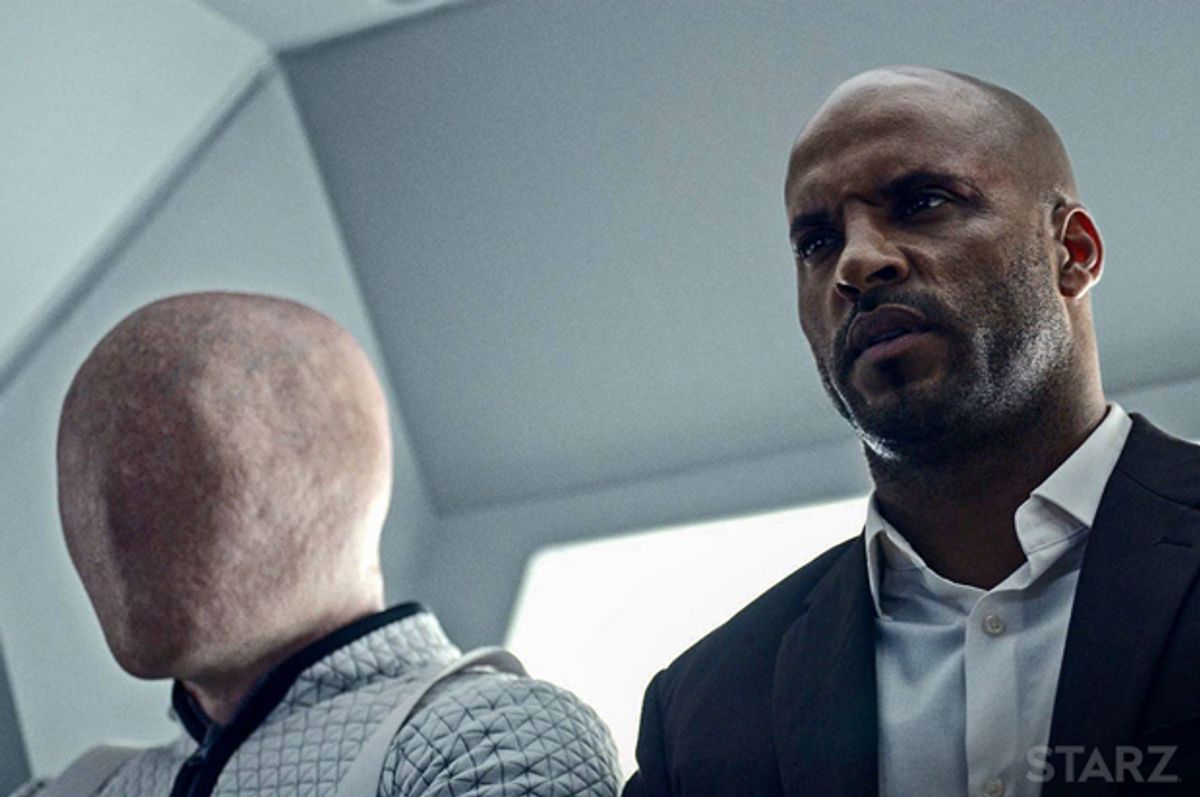 Take a moment to appreciate the spiritual symmetry Starz’s “American Gods” brings to the next eight Sunday nights. Millions will greet each of those mornings with ceremonial worship and prayer, and a share of those same people, as well as others who are less religious, will end the day watching this drama — a show that questions whether faith gains us anything in the end.

For there’s no question in “American Gods” as to whether deities exist. They walk among us and have done so for centuries, sharing many of the same urges and frustrations as humans do. What the gods are not, however, are interventionists. Pray all you want; odds are they’re not listening. But be careful because the ones who answer may not give the pious the deliverance sought.

“American Gods,” premiering Sunday at 9 p.m., represents Neil Gaiman’s contemporary take on pantheons merging and colliding, something genre fiction writers played with on page and screen many times over. Readers familiar with Gaiman’s “Sandman” comic books will recognize the insouciant humor and a similarly fluid sense of time and reality in Bryan Fuller and Michael Green’s television adaptation.

If Odin's boys could only see him now! Traveling as Mr. Wednesday, the battered and rumpled old god (played sublimely by Ian McShane) merrily, lazily slides into the life of recently released convict Shadow Moon (Ricky Whittle). Shadow finds out as he’s released that his wife Laura (Emily Browning) has died unexpectedly, a terrible stroke of fate that brings him into Wednesday’s orbit.

Wednesday cons his way into first class by pretending to be senile and harmless, and Shadow, in a stroke of luck, is bumped up when his seat is double booked. Whether this was actually coincidence or the downward-trending god’s will is the first of many small mysteries “American Gods” sprinkles throughout its initial episodes — and probably the least important.

Mr. Wednesday is up front about who he is: a liar, cheater, swindler, hustler. A few drinks later Mr. Wednesday persuades Shadow to become his paid bodyguard, a job assured to come with a lot of perks as well as a high probability of a violent death. For Wednesday is gathering an army of old deities to take on the New Gods, a coalition of uncaring beings led by Mr. World (Crispin Glover), which includes the bratty Technical Boy (Bruce Langley) and the seductive Media (Gillian Anderson).

While the Norse god can count on some truly potent allies, including a tall and pugilistic leprechaun named Mad Sweeney (Pablo Schreiber) and Czernobog (Peter Stormare), a bloodthirsty Slavic lord of darkness, latter-day humanity’s obsession with material gain and convenience has decided tilted the odds against Mr. Wednesday’s team.

Now capricious creatures of faded glory, these formerly supreme beings have been forgotten, pushed into musty, small spaces and wrapped in dingy, plain clothes. Survival has transformed them from masters over the elements and protectors of humanity into con artists, thugs and killers. Yet they personify timelessness; regardless of the actor playing them, these beings do not seem recognizably young or ancient. Their places of worship may be velvety scarlet dens of supplication or a bank of screens at a big-box store; their altars are dreamscapes of temptation, threats and teeth that catch men by the throat.

“American Gods” takes place at the nexus of classic myth and modern techromancy, archetype and prototype, and wrestles with concepts no less than the churning of an unconcerned and enthralling cosmos.

Gaiman’s new gods, like the old ones, are manifestations of modern beliefs. And what do we believe in these days? The material and the measurable — fame, convenience, wealth. The new gods promise the kind of immortality that can accessed by a search engine, with none of the nonsense about souls or angels or never-ending bliss in union with the infinite.

But the infinite is dazzling, no question. Transitional sequences within each episode convey the wonder of the universe through wide shots of color-saturated natural vistas and skies streaked with carpets of stars. The show's cinematography and digital imagery emphasize the juxtaposition of the natural world against the synthetic, reality versus the realm of the unreal, impressing upon the viewer how inconsequential man happens to be in the vastness of time and space. It also invites the viewer to see an extra level of magic within floating tufts of dandelion seed.

The drama provides an ideal canvas for Fuller and Green to unleash their creative and collaborative powers. The conscientious visual style that Fuller honed on “Hannibal” achieves riotous new heights of sensuality in this series. Green, a DC Comics veteran whose television credits include serving as an executive producer on “Heroes,” aids in harmonizing the story’s surfeit of histories and personalities into an intelligible and spellbinding structure.

Combining their strengths, Fuller and Green have taken a story long believed to be untamable and channeled its powers into a delirious odyssey that takes its time with character development without putting too much drag on the tale’s velocity.

It doesn’t take long for Shadow and Wednesday’s road trip to become a Technicolor debate about the nature of belief and the power of faith. Mr. Wednesday needs both to continue to exist. Shadow Moon, as his name implies, is a guardian of the threshold between the mortal and the eternal. He believes in nothing. Yet the oddity he witnesses at Wednesday’s side gives him pause.

Fuller and Green co-wrote five of the first season’s eight episodes, and their scripts gives the show’s superlative cast a buffet of opportunities to chew the scenery. Orlando Jones’ introduction as Mr. Nancy is marked by a blazing monologue evocative of Alec Baldwin’s epic “Glengarry Glen Ross” speech and it’s chockablock with just as many cold assurances.

McShane ascends to his usual level of brilliance, but Whittle’s Shadow wields a seductive, brooding charm that stands up to the “Deadwood” star well enough. And their partnership gives credence to the idea that the gods could be a little insane.

But Fuller and Green accentuate the comedic side of these gods and goddesses much more than their cruelty (the exception being Yetide Badaki’s divinely concupiscent Bilquis) which imbues “American Gods” with a cheeky flair. And if the performances by the likes of Jones, Stormare, Schreiber and Cloris Leachman seem outsized, that's proportional to the beings they play.

So numerous are the number of gods that we don’t even meet them all in the first four episodes. Those who are introduced, however, are fascinating enough to purchase the viewers' patience with the relatively leisurely speed that “American Gods” travels through the plot. It takes time to construct a world worthy of worship.