Girlboss in the White House: How Ivanka Trump's business success makes her above reproach 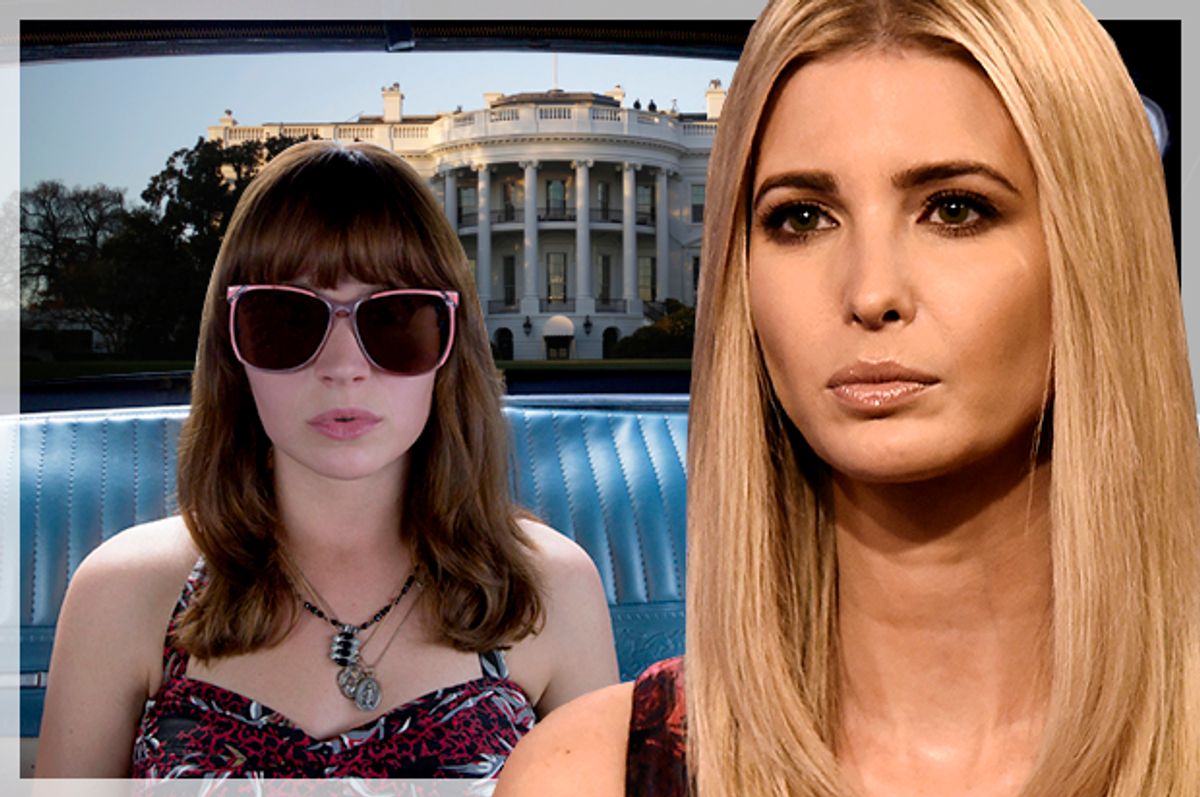 Netflix premiered its loose adaptation of Nasty Gal clothing founder Sophia Amuroso’s memoir “#Girlboss” two Fridays ago. I can’t exactly recommend “Girlboss” — hashtag blissfully no longer required — but I still watched every minute of the first season in one weekend.

Knowing what we all know about how things turned out for Nasty Gal — ginormous net worth for Amuroso, followed by a devastating downturn for the brand, which is now bankrupt, and a second act as CEO of Basically Being a Girlboss — there’s some muted secondhand pleasure to be mined in watching Amuroso’s fictionalized avatar “Sophia” (Britt Robertson) act like an unbridled asshole and still rake in cash hand over fist while beating the other online vintage clothing sellers, all portrayed as frumpy, old, misfit losers to her edgy-sexy Nasty Gal, at their own game.

Sophia’s determination to be her own boss seems born more from necessity than true talent. She’s practically unemployable, with no authentic ambition yet plenty to prove. Nevertheless, she turns having a nose for undervalued vintage clothes and the massive chip on her tiny shoulder into laying the groundwork for a fashion empire. Along the way she abuses her loyal best friend, a web designer, a professional ally, a professional rival temporarily won over by her sociopathic charm, her boyfriend who turns out to be a jerk anyway, and her hard-nosed, long-suffering dad.

(Pretty much the only person she’s not horrible to at some point is her neighbor Lionel, played by RuPaul. You can’t talk to RuPaul like that.)

“Odious people being good at their jobs” has been a bona fide TV drama subgenre for years now. Call this one “Breaking Bad” for design school dropouts: a clear-eyed accounting of exactly how much terrible behavior a white woman (a young, straight, conventionally pretty white women, that is) can get away with and still be hailed as the heroine of her own story.

It’s crucial that Sophia becomes a success by the end of the first season. That’s what we’re supposed to be rooting for her to do because otherwise watching a feral girl-child flail in basic adult and interpersonal situations is just depressing. To be clear, this is not about the debate over “likable” and “unlikable” female protagonists. “Girlboss” is not the next character study of a fascinating yet to-some-degree flawed young woman, like “Crazy Ex-Girlfriend” or “Fleabag” or even “Insecure.” As characters go, Sophia is flawed but not fascinating.

The value in her narrative is intrinsically tied to her eventual financial accomplishments and industry dominance. The female protagonists of those other shows will likely never pay months of commercial real estate rent up front out of a wad of Benjamins pulled from a platform boot, which means they suffer lasting interpersonal and professional consequences when they mess up, just like the rest of us. Being a #Girlboss means indulgence for your worst personality traits because that move with the money and the boot is badass.

The story that “Girlboss” really tells us is this: In America, you can be as much of an asshole as you want, as long as you’re a rich and powerful asshole. We not only tolerate it; we celebrate it. One look at the White House proves it. One crucial caveat: If you’re a woman, you also have to be considered young and attractive according to dominant cultural beauty norms. Think of that as the line between being a Nasty Gal and a Nasty Woman.

Nobody in our cultural eye at this moment personifies the rule with as much sinister politesse camouflage as Ivanka Trump. While she prefers to cast herself as executive of the responsible, respectable #WomenWhoWork brigade, Ivanka’s Girlboss perks are largely the same. Her success — and how good she looks doing it — has thrust her onto a level nearly beyond criticism, even as she represents her father’s administration, with all its horrors known and yet to come, as a federal employee (unpaid — she doesn’t need the salary, of course) at home and abroad. Witness her appearance on a panel about women’s empowerment at the W20 summit in Germany on Tuesday, during which she defended Donald Trump’s advocacy for women. The room was having none of it, and offered up boos and hisses to Ivanka’s disingenuous lines.

Ivanka remained unfazed by the hissing, telling reporters, “I’m used to it. It’s fine.” But that didn’t stop CNN's Chris Cillizza from jumping in to defend her honor. After Cillizza listed the reasons why the jeers were entirely deserved — Planned Parenthood, "Access Hollywood," the Fair Pay and Safe Workplaces Act, attacks on Carly Fiorina et al — he claims it’s not fair to boo her, “a powerful businesswoman defending her father” because after all, who wouldn’t have her own dad’s back?

The day Ivanka Trump needs Chris Cillizza to have her back will be a cold day in the #WomenWhoWork office, where the thermostat is always set to “tasteful sleeveless sheath.” Ivanka stood up there and delivered her howlers about her father’s so-called empowerment of women with a shamelessness that rivals Sophia’s profanity-laden tirades in “Girlboss” against other people and the world. And yet criticizing someone who has built her eponymous company, even when she absolutely deserved it, is apparently grounds for chiding. What do you mean you’re not thrilled at how she made that G20 women’s empowerment panel her bitch?

Ivanka’s status as a “powerful businesswoman” is constantly invoked, both overtly and sideways (as in Cillizza’s deployment of the phrase), to deflect criticism of the ways she very deliberately and calculatedly pinkwashes her father’s policies and demeanor toward women in order to gain and maintain wealth and power for herself and her family. As Ed Rogers in the Washington Post admonished:

[C]an anyone really think of a better representative than Ivanka Trump to speak for the administration during a discussion on women in business? Trump has actual real-world experience in manufacturing, she’s launched retail lines that bear her name and she has taken real risks in the unforgiving retail marketplace.

Yes, I’m sure the store clerks, factory workers, custodial workers (and unpaid interns!) in that “unforgiving retail marketplace” would agree.

We are supposed to trust Ivanka — and in this reality show of a presidency, that means root for her, support her, see her as a heroine of her own narrative — simply because she embodies a thing we hold most dear in America: entrepreneurial success. Her professional accomplishments are even touted as a reflection of her father’s hidden decency (never her mother Ivana’s parenting, oddly enough). Meanwhile, Melania has been relegated to the role of First Stepmother. She receives little of the grace extended to Ivanka from moderates and sympathetic liberals, partly because there is no empire to admire.

American literature is riddled with reasons why being a powerful business owner does not automatically make you a good person, but who can brush up on their great books when there are Netflix shows to binge, or enemies to crush under the heel of your nude peep-toe pump?

When Baz Luhrmann's "The Great Gatsby" film came out, the Trumps did not miss a beat. A "Great Gatsby Package" went on sale for $15,000, which included the following:

[A] three-night stay in a Central Park-view suite, plus luxe extras like chauffeured car service, dinner for two at three-Michelin-starred Jean Georges restaurant, daily breakfast at Nougatine at Jean Georges and a magnum of Veuve Clicquot Champagne. A bonus Ivanka Trump Fine Jewelry Art Deco shagreen-and-onyx cuff (with a personal note from Ivanka) will complete any chic lady’s look, while men will impress with a custom-tailored suit from Bergdorf Goodman, complete with vintage Art Deco cufflinks.

Absolutely no irony should be read into the offer of "chauffeured car service," as certainly none was intended.

In "The Great Gatsby," all the sweet glitter of the wealth and power that Nick Carraway, the reader's guide and eyes, orbited around turned bitter and fell away in the end. America, old sport: Time to take his cue.