The ex-president's $400,000 speaking fee is no crime — but it sure doesn't help the Democrats' image problem 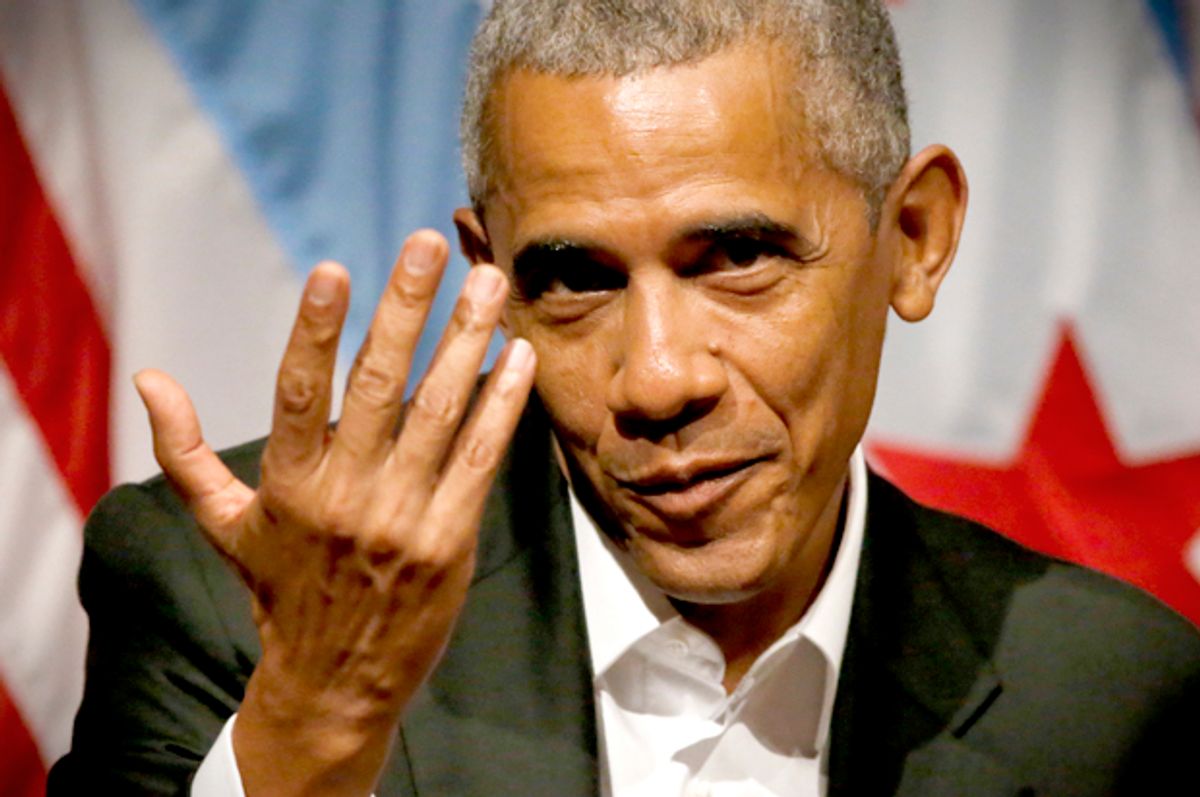 In this day and age, getting elected president of the United States is kind of like winning a golden ticket that brings you immeasurable wealth if you can make it through one or two hellish terms in office. It has become standard practice over the past few decades for presidents to cash in that golden ticket after leaving the White House.

It was disappointing but not terribly surprising, then, to learn this week that former President Barack Obama will follow in his predecessors' footsteps and cash in his ticket. Though Obama has already scored a lavish book deal  rumored to be worth up to $60 million, plus royalties — more money than most people could ever dream of making, or spending, in their lifetime — it was reported on Tuesday by Fox Business that the former president has also agreed to give a speech in September for the Wall Street investment bank Cantor Fitzgerald. His fee will be $400,000. In other words, Obama will make in about one hour what an average American worker makes in about a decade.

This news predictably vexed progressives, with Sen. Elizabeth Warren, D-Mass., saying that she is “troubled” by the president’s decision, and Sen. Bernie Sanders, I-Vt., calling it “unfortunate.” At the same time, the news delighted conservative pundits, who gleefully branded Obama a self-interested hypocrite. On “Fox & Friends,” conservative author Kristen Tate called it the “height of hypocrisy,” opining that “it’s all about personal gain for Obama.” While almost all politicians “cash out” after leaving office, Tate continued, “Democrats end up looking more hypocritical than Republicans because it's the Democrats who constantly rail against greedy, rich bankers and rich businesspeople.”

Although Tate’s critique was clearly motivated by partisan resentment, she was not altogether wrong to point out the contradictions between what many Democratic politicians say and what they actually do. After all, this was one of the major problems with the candidacy of Hillary Clinton, who was a bundle of contradictions. As a candidate, Clinton simultaneously criticized big money in politics, while raising over a billion dollars with the help of Wall Street bundlers and billionaire mega-donors — and it was her high-priced speeches for banks like Goldman Sachs and Deutsche Bank that eroded her credibility on issues like political corruption and income inequality.

Needless to say, there is a big difference between a former president and a potential presidential candidate raking in millions of dollars on the speaking circuit. As far as anyone knows, Obama is not planning to run for public office again in his lifetime. Nevertheless, the former president’s decision does continue to set a bad precedent for American politics, while further undermining the credibility of his own party, which is currently trying to rebrand itself after last November’s fiasco.

Today we are living in an era of populist politics. Economic inequality and political corruption have become major issues again not because of Bernie Sanders' presidential campaign, but because they have become increasingly severe problems over the past 40 years. It stands to reason, then, that the party that can effectively capture this populist spirit while offering a platform to confront these urgent problems will triumph in future elections.

Of course, it isn’t quite that simple. As the Trump administration’s recently unveiled tax plan reminds us, the Republican Party is and always will be committed to serving corporations and the billionaire class. Yet this hasn’t stopped Republicans from effectively portraying their Democratic opponents as a bunch of snobby, out-of-touch elites over the past 30 years or so. According to a recent Washington Post survey, this rhetoric has paid off: Only 28 percent of respondents believed that the Democratic Party is “in touch with the concerns of most people in the United States.”

For a party hoping to rebrand itself as populist in 2018 and 2020, this is a disturbing finding. Decades of right-wing propaganda obviously have a lot to do with the Democratic Party’s image problem, but it would be remiss not to place much of the blame on the party itself — just as it would remiss not to place some of the blame on Hillary Clinton for her own image problem.

Though the irrational and visceral hatred that many Americans feel for Clinton stems from 20-odd years of conservative propaganda and “fake news,” it is also true than Clinton is a flip-flopping politician with questionable ethics, close ties to Wall Street and corporate America, and a list of legitimate scandals on her résumé (though the list of pseudo-scandals is admittedly longer).

Similarly, the Democratic Party has done a great job over the years in facilitating the GOP’s propaganda efforts. In his seminal 2004 book, “What’s the Matter With Kansas,” author Thomas Frank makes an important point about how Republicans have been able to portray themselves as populist in recent decades, even while dutifully serving the 1 percent:

At the center of it all is a way of thinking about class that both encourages [the cultural] class hostility of the kind we see in Kansas and simultaneously denies the economic basis of the grievance. Class, conservatives insist, is not really about money or birth or even occupation. It is primarily a matter of authenticity, that most valuable cultural commodity. ... The erasure of the economic is a necessary precondition for most of the basic backlash ideas.

Frank goes to point out that, in some ways, right-wing populism is like an “old-fashioned leftist vision of the world with the economics drained out,” and that while leftists faulted capitalism “for botching this institution and that, the backlash thinkers simply change the script to blame liberalism.”

This is all true. But it is important to recognize — as Frank does in his latest book, “Listen, Liberal” — that the Democrats assisted right-wing populists and their propaganda efforts by abandoning economic populism and embracing neoliberalism toward the end of the 20th century. Thus, while the Republicans are the party of the billionaire class (i.e., the 1 percent), the Democrats have become the party of the professional class (i.e., the 10 percent).

In order to capture the current populist energy and harness it toward progressive ends, the Democrats must once again embrace economic populism while defending the gains that have been made on social issues like LGBT rights. Unfortunately, Obama is not helping.