Jimmy Buffett's hit came out in '77. Now it's a retirement community, a musical and a symbol for something lost 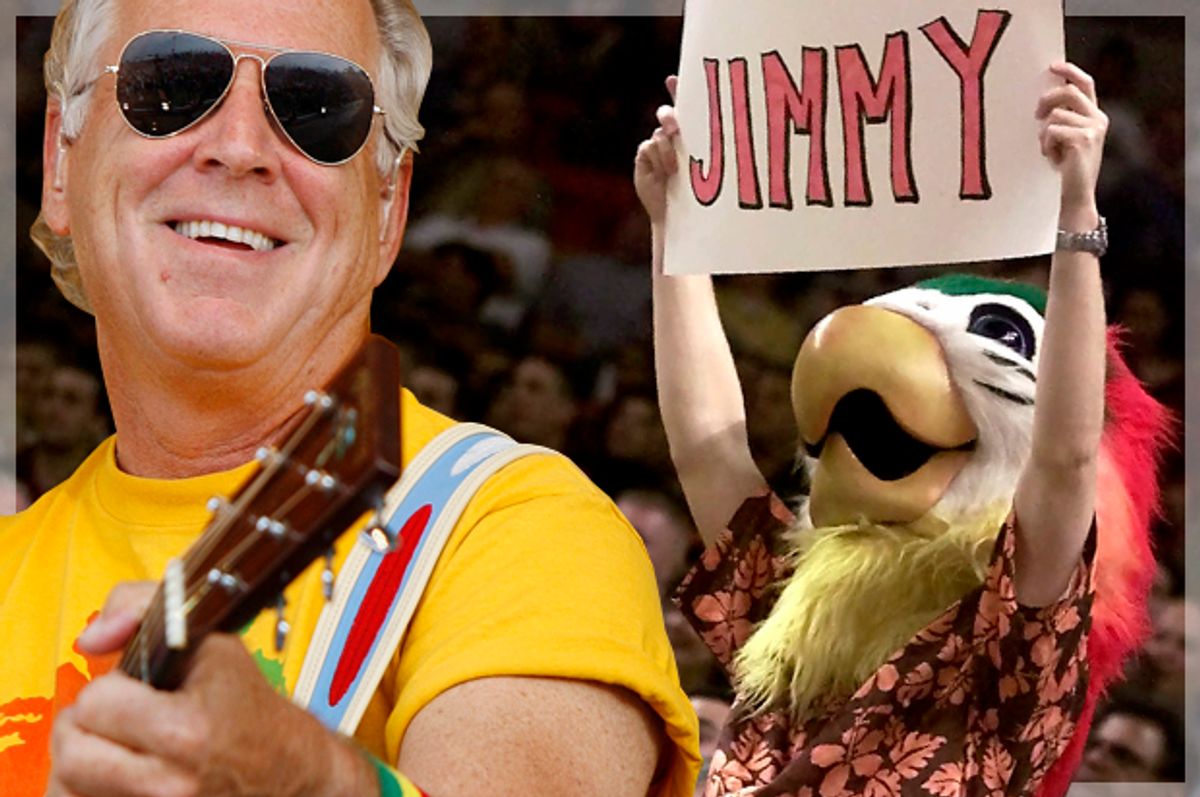 Joseph Farto went by a couple of names. One was Bum. He picked it up as a kid, hanging out in Key West’s fire stations. The other was El Jefe, which fit when he eventually became Key West’s fire chief.

Farto was recognizable. He had an enthusiasm for fire-engine-red clothes and saw the world through literal rose-colored glasses. He liked baseball and Santeria and he’d drive his lime-green Cadillac up to the field at Key West High and light a couple candles for luck. He also moved drugs — first marijuana, which had been commonplace in the Keys, and then the cocaine that complicated the situation.

Weed was one thing, but it became hard to overlook the coke (and the bodies it piled up), and so on Sept. 9, 1975 — four years after Nixon declared war on drugs — Farto and 18 others were swept up in a raid punctuating what the government called Operation Conch.

It took a Key West jury 30 minutes to convict Farto. He was out on bond, awaiting sentencing, when he rented a car, drove to Miami and was never seen again. The pragmatists figured he was murdered. The romantics hoped he took his money, ran south to the islands and safe harbor on some postcard-perfect beach.

Either way, it was the stuff of legend, and merchandise — both promoted on stage in 1976 by Key West’s most semi-famous resident, a wild-eyed singer-songwriter who’d built more goodwill than commercial success.

The T-shirt, a popular item around Key West, read, “Where is Bum Farto?” Jimmy Buffett wore it proudly.

Late that year, Buffett took his Coral Reefer Band into a Miami studio, the same studio where the Eagles cut “Hotel California,” to make an album called “Changes in Latitudes, Changes in Attitudes.” He slipped Bum into a song called “Landfall” and set that into a record about people feeling out of sorts and out of place. “Wonder why we ever go home,” he sang.

In January 1977, just ahead of the record’s release, Buffett decided to make a run to the Bahamas in his new sailboat, the Euphoria. Strolling about Staniel Cay, Buffett saw the only phone on the island, in a squat yellow building marked by a “Bahamas Telecommunications Company” sign next to the door. Turning to Tom Corcoran, his friend, navigator and a photographer, Buffett said he should probably call ABC Records in Los Angeles. To see if he still had a job.

More than just a job, he was told might well have a hit. A disillusioned-but-sunny track called “Margaritaville” was showing promise, and Buffett needed to get his ass off the boat, back to the States and onto his tour bus. A few days later, a chartered Beechcraft King Air lifted off from the islands en route to a tour that’s never really ended and a career that became a lifestyle that became a brand. And these days, that brand is closing in on $2 billion a year in sales.

By Billboard’s accounting, “Margaritaville” became the 14th-biggest hit of 1977, peaking at No. 8. It remains Buffett’s biggest, and arguably only, hit. That was then.

Today, it’s restaurants and hotels, resorts and casinos, bicycles, blenders, bedding, frozen foods, liquor and beer. It’s the sound of summer, of hammocks swaying and flip-flops flopping and a million haggard suburbanites calling time out — from jobs, from commutes, from everyday life. It has been shaped and reshaped by time and culture. It’s grown up. Like most everyone does.

Having long ago shed its quote marks for trademarks, Margaritaville has become so very, very many things it’s hard to remember what it was, where it came from and who the guy was who sang it all into existence.

When Jimmy Buffett arrived in Key West in November 1971, it was aboard the Flying Lady, Jerry Jeff Walker’s 1947 Packard. Buffett had met Walker in Nashville, when Walker was working on a record and Buffett was working as a Billboard reporter. Buffett would eventually record two records in Nashville for Andy Williams’ Barnaby Records. One was released and flopped, the other “lost” before the label could put it out.

About the same time Buffett’s recording career was falling apart, so too was a marriage. When he landed in Florida, he didn’t have anything but a gig at a folk club in Coconut Grove, and even that wasn’t when he thought it was. With a few days to kill, they drove south until they ran out of road at the Chart Room, a bar that, in the years to follow, would become something like Buffett’s office.

Walker knew Corcoran, who was tending bar. Corcoran handed Buffett a Heineken on the house, and the night faded into a warm, blissful haze. Buffett woke up in a strange bed with a new friend. They went for a ride on the Conch Train and he wrote a song called “I Have Found Me a Home.”

He met writers Tom McGuane and Jim Harrison, busy chasing Hemingway’s ghost. He played Hank Williams songs by Tennessee Williams’ pool. Sex was plentiful. Drugs were plentiful. Everyone knew someone who was smuggling. “Gentlemen of the ocean,” Corcoran likes to say.

Key West was wild and free and world away from whatever was going on up in America. Why worry about a gas shortage when you could get anywhere by bike. Key West in the early ’70s was a playground for artists and outcasts -- and for Buffett, who’d been too country for New York and Los Angeles, and not country enough for Nashville. It was a place where he could be himself.

He could work out screwball songs packed with oddball characters and take them on the road to Peoria, Illinois, or Hammond, Indiana — places where a touch of the exotic went a long way, even if he was playing student unions and coffee houses (which he was).

Key West back then had one more charm: It was empty. “The joke in ’73 and ’74 was the chamber of commerce had someone stationed on the Seven Mile Bridge to call ahead when a car was coming,” Corcoran told me. “Then everyone would race down Duval Street and open their stores.”

In 1974, Buffett had a minor hit with “Come Monday,” a song set in the West (Los Angeles, San Francisco and a Montana flashback) that stared longingly home to the Keys. But the follow-up never came. He put out a few albums that did OK, but radio was always resistant. Meanwhile, Key West began to wake up. Tourists began to work their way to the end of U.S. 1, chasing Hollywood-inspired beach blanket fantasies. Buffett’s perfect little town was changing. Like most every town does.

Jimmy Buffett was nearing his 30th birthday when he recorded “Margaritaville,” which he began writing in Austin, Texas, after an afternoon of drinking in a Mexican restaurant. There’s a hint of disdain toward the tourists in the first verse. More than a hint if you’ve heard the “lost verse” about old men in tank tops and their “three-day vacations” that “become such a bore.” As for the guy sitting on the front porch swing, why had he stayed so long? What did he have to show for it all? Could he shift the blame for all that was going wrong and get out unscathed? Well, no. Not any more than you can stop time. Eventually we all face a truth or two. It was his own damn fault all along.

It’s become an adult contemporary standard, one of the most familiar songs in pop history. It entered the Grammy Hall of Fame last year, was cited in a court decision regarding the legality of tattoo parlors in Key West, was sung by Stephen Malkmus in the Will Arnett Netflix series “Flaked” and, most famously lately, is about to become a retirement community.

Latitude Margaritaville will be a $1 billion community near Daytona Beach, Florida. More locations are promised. Which means more and more opportunities to joke about “wasting away in . . . ” It will join an in-progress $800 million resort near Walt Disney World in Orlando, timeshare resorts in the Caribbean, bars on cruise ships, an “Escape to Margaritaville” musical that opens May 9 in San Diego with Broadway in its sights, and all the other stuff wearing the name of a song that struck a chord. “Chill: Est. 1977,” some hats and T-shirts say.

Buffett wasn’t always as easy with the sale as he is these days. “Sometimes I wish the radio would learn another song,” he sang on 1982’s “Where’s the Party.” A 1987 script for a “Margaritaville” movie was to star a cowboy and a smuggler who learn to get along so they can “save the Island of Margaritaville and the way of life it symbolizes from the forces of greed and hypocrisy.” In other drafts, his cowboy on the run, upon seeing the marketing of Elvis at Graceland, was driven to existential dread. “When I got to Memphis (looking very sad and sighing),” Buffett wrote, “I was not ready for what I found.” What his cowboy discovered was the true meaning of American free enterprise: “If it’s popular, put it on a T-shirt.” And that line made it into 1989’s bestselling collection of short stories, “Tales from Margaritaville: Fictional Facts, and Factual Fictions,” where he really began to grow his little island into a bigger world that drew from all his work.

But he couldn’t escape Margaritaville’s gravity, because people liked Margaritaville — a lot. Just as they’d always liked Buffett. Slowly over time, the two became inextricable. Jimmy Buffett and Margaritaville are synonymous, and trademarks have been contested and won over that point.

So Jimmy Buffett gave the world what it wanted: Margaritaville, again and again and everywhere. Not far from the Chart Room, which still exists, entombed much as it was within a luxury resort, there’s now a Margaritaville Resort and Marina in Key West, which these days is a luxury vacation destination, a cruise ship stop and a stylized version of its older, grittier, freer self.

It is kind of funny that Jimmy Buffett is putting the name of his most famous song on a retirement community. But hang around long enough and all the outlaws become sheriffs.

You can buy a Nirvana T-shirt at Target. Ice-T plays a cop on TV. CBGB is a restaurant in the Newark airport and its old home is a John Varvatos store. John Varvatos sells $80 T-shirts that say “It’s Only Rock and Roll” — which it was.

In 1972, a guy named Chris Robinson, hair down to his waist, stopped in Key West to see what the fuss was about. He stepped into a bartending gig at the Chart Room, one vacated by a sometime-smuggler Buffett would write “A Pirate Looks at Forty” about.

Robinson’s hair is to his shoulders now. He’s a fishing guide on Sugarloaf Key, but he still likes Key West, and doesn’t worry so much about all that’s changed. He remembers how when he first arrived, the old timers, the ones who’d sat beside Hemingway, told him he was 10 years too late. Like we all forever seem to be.

Ryan White is the author of "Jimmy Buffett: A Good Life All the Way," out May 9 from Touchstone. He lives in Portland, Oregon, where once there was a bar named the Euphoria Tavern, which gave name to Buffett's first boat.