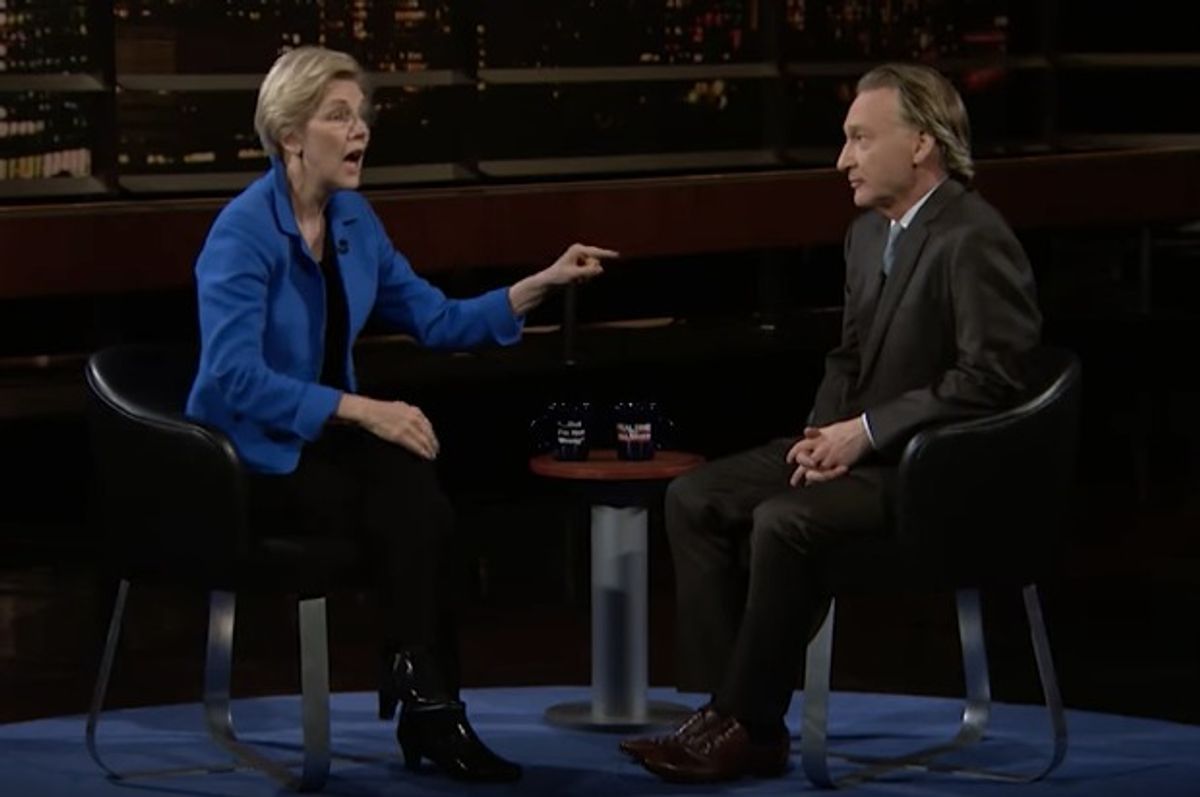 Democratic senator Elizabeth Warren (MA) appeared on Real Time with Bill Maher Friday night to promote her new book This Fight Is Our Fight: The Battle to Save America’s Middle Class, and Maher had some spirited words for her. Though he is a fan, in typical Maher fashion, he hammered Warren on several issues.

To loud audience applause, Sen. Warren spoke as though she was stumping (and she probably was) about the state of the U.S. “People all over the country are energized right now,” she said, to continuing applause. Warren explained her position that Reagan-era deregulation and tax cuts for America’s wealthiest 10% created the current economy and anger over jobs and many issues that got President Trump elected. “1980 to 2016, GDP keeps going right on up...and how did the 90 percent do? They get zero percent of the new income growth. Nearly 100 percent of new income growth in this country goes to the top 10 percent,” said Warren. “That’s why I wrote this book, it’s because we got to get in there and fight back...We’ve got to take back this country.”

Maher was ready, as ever, to argue. “Well, let me fight back a little,” he said. Citing the four terms where the Democrats held office from 1980 to 2016, Maher wondered if the Democratic Party was responsible for some of the current problems in our country.

Warren agreed, and Maher continued to question her position, asking why in spite of Trump's new tax plan that brazenly pumps up the rich's tax breaks, his working and middle class supporters continue to rally around him - but still dislike her so strongly. “They don’t like you, Pocahontas,” joked Maher, referring to President Trump’s racist moniker. Warren refused to take the bait, but looked annoyed.

She went on to talk about the "progressive agenda—raising the minimum wage, expanding social security, [and] reducing the cost of college" as long-term solutions. “I think Donald Trump tapped into a real anger in America. People are angry, and let’s face it: they are right to be angry,” said Warren. But first, she said after a bit, “The first step is: our side has to acknowledge the anger, and has to say, yeah, people are angry and they have a right to be angry.”