"Welcome to my kill": An ex-vegetarian's adventures in elk hunting

I had never been closer to the source of my food. This was a far cry from a frozen, lab-created fake chik'n patties 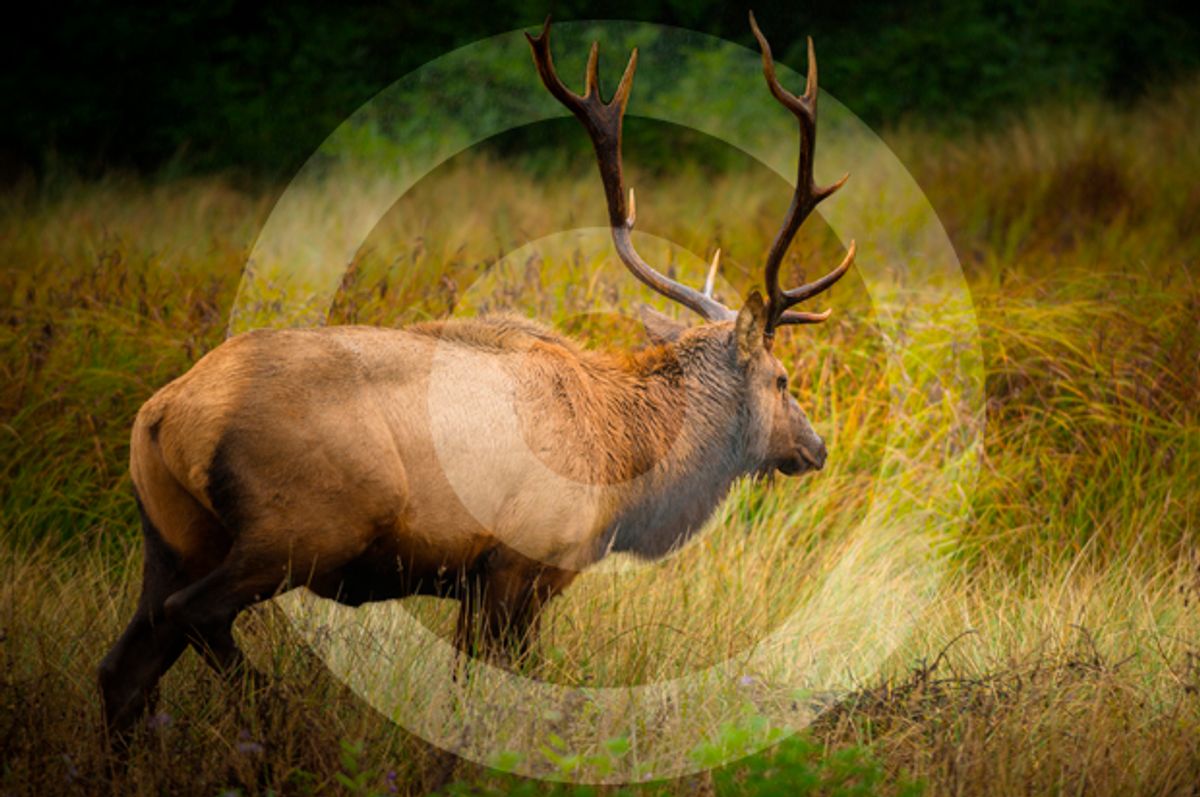 Excerpted from "The Vegetarian’s Guide to Eating Meat" by Marissa Landrigan. Published by Greystone Books, April 2017. Adapted and reproduced with permission of the publisher.

Do you feel that?” Rick turned to me and asked, tucking the brim of his camouflage cap up an inch on his forehead. “How everything just got quieter?”

I nodded, silently, solemnly, though I was lying. I had not felt the quiet. I’d been focusing on the trail in front of me, which was particularly rocky here, and on the way my brand-new hiking boots slipped over the shards of mountain slick with pine needles and a slight lingering frost. I hadn’t been listening. I’d just been trying to keep up. He pointed to the ground.

“This is the imaginary dotted line in the woods. When I cross it, I’m in elk country.”

The morning hadn’t yet begun when we headed out, pulling on gear in the empty trailhead parking lot, loading the rifle by headlamp shine. I’d stumbled along the first few miles of the marked trail in darkness, skipping to keep up with the brisk pace set by someone who had done this many times before and hoping my rain pants swishing as my thighs moved rapidly weren’t making too much noise. The sun rose gradually over the next few hours. Deep in the crease of a canyon in southwestern Montana, surrounded on all sides by glacier-cut rock and centuries-old pines, the sunrise appeared to me only as a slow graying of the air I breathed, dark purple giving way to the fuzzed pale fog of daylight in the mountains. Gray gave an ethereal, hushed quality to the day, the sounds of our boots muffled by a carpet of needles, one of the only sounds the occasional swish of a branch against our jackets.

As we walked the first few miles, he told me about how hunting had changed for him. He told me it used to be an adrenaline thing, a got-to-get-that-animal drive of problem solving, a heart-pounding urgency, a competition. Most of it was gone now for him, he said, and he missed it. Now, it was as much about being in the woods and walking around as it was about taking an animal.

I still couldn’t believe I was here. I couldn’t believe this was really happening. It had only been one week ago that Rick had agreed to let me accompany him on this hunt, and only a few weeks earlier that the idea had been planted in my mind. I was sitting in a graduate classroom, workshopping the essay I’d written about my time on the farm, when my thesis advisor, Ben, said, “I know how your book ends. You hunting elk in the woods of Montana.”

Ben suggested Montana partially because he knew I’d lived there, and had written about hunting culture in the state before, but also because he knew a writer, Rick, who lived in Montana and was also a mindful and ethical hunter. It was both a literary and a practical suggestion. The more I thought about it, the more I realized how right Ben was: the hunt was something I needed to see. Again, something I’d never expected to find myself doing materialized as a possibility and crystallized quickly. Just days after his initial comment, I was in Ben’s office, asking if he could really make it happen.

Convincing Rick wasn’t easy. As many of us writers do, Rick preferred his time alone. But beyond that, the act of hunting was a private affair, an intimate connection between him, the animal, and the woods. Which was exactly the reason I wanted to join him, and not just anyone, on a hunt. I didn’t want to see how the average American meat eater might hunt. I wanted to observe someone who I knew respected the land and the animal. When I explained that to him, he agreed; he was free, he said, next weekend. I used up all my frequent flyer miles and booked a round-trip ticket to Missoula.

We left the trail about four miles in, veered off to the right, and headed straight up a steep, rocky slope. The debris grew slicker as we climbed, and he told me this was how he knew there’d be snow up ahead. We cut back and forth across the mountain, lungs heaving, arms slicing through snapping branches, ankles turning as our feet slid from rock to uneven soil. We were going to climb long and high, he’d told me already, to come down into the burned remains of the canyon from the north, so that the animal—that’s how he spoke of it, as a single one, the mythic, iconic animal—wouldn’t catch our scent on the southern wind.

As we scaled—or as he scaled, and I scrambled up behind him—and our bodies leaned into the incline, my hands sometimes dusting the frosty soil in front of me for balance, he would pause, his voice hushed now as the sun bore through our heavy jackets, and crouch slightly, pointing towards a patch of scuffed dirt where he spotted clusters of pellets, or hoofprints.

“There. An animal.”  When he showed me the signs of the animal, I could see them, but if he hadn’t been there, I never would have known. He was tuned to the higher frequency of the hunter.

I knew this wouldn’t be the day I learned to stalk an elk. Why had I ever thought it could be taught in only one day? This was a lifetime’s work, to learn the woods.

When we stopped for lunch, brushing snow off a log near the side of the slope we were climbing, my exhaustion began to set in. My ears rang with the thump of exertion; my cheeks were flushed with blood. I crouched on the log and ate peanut butter and jelly ravenously, to quell the light-headedness, and Rick showed me how much farther we had to go. From here, we could see the canyon, and he pointed down into it, to a patch of blackened trees that had burned years before. There, where the elk made their day beds, high enough to ensure a thick blanket of snow cooled them as they slept, we’d find the bull he was after.

The climb became harder. Suddenly aware of my awkwardness, I heard every branch that snapped under my feet; I flushed with embarrassment at the noisiness of my labored breathing. Rick pulled ahead of me easily while I willed my legs to lift in and out of the now ankle-deep snow. He stopped and told me I was doing great—for someone who’d come from sea level. I was hauling myself up by tree trunks and seeing little hypnotic worms around the edges of my vision, when I saw that he’d stopped up ahead.

“There they are.” Elk tracks. And that’s when we heard the gunshot.

He swore again, under his breath, turning from me slightly. “That was our animal.”

I was following him blindly through the woods, but his path had been intentional—he’d been following a single bull elk this whole time, tracing its visible path through the trees in the scuffs of dirt and hoofprints in the snow. He knew it was one animal. He even thought, having hunted this herd in these woods before, that he knew exactly which bull elk we were following. But now it was clear that another hunting party had entered the woods from another direction, and had beat us to the animal we’d spent the whole morning tracking.

We hiked on a little, following the now easy-to-spot hoofprints in the snow. Soon, the prints of another animal, a horse, danced in and out of the elk’s to form a wide, woven trail, something more obtrusive than anything I’d seen all day, obvious, the way it is when people walk in snow.

“In all the years I’ve been hunting around here, I’ve never seen another soul, not one person,” he said.

We heard the whinny of a distant horse. He showed me where the elk had first noticed it wasn’t alone, how the prints began to weave around trees, up and down the slope. He laughed and shook his head, as if at an old friend’s joke, a familiar, endearing story. The elk was toying with them.

As we walked, I placed my feet intentionally in the elk’s trail, treading the same path as a dead or dying animal, as if walking in its footsteps would help me understand something.

Just down the ridge slightly, Rick began waving, seeing the hunting party before I did. He swore under his breath again and then called, cheerful, “Congratulations!”

When I saw them, I saw the hunters I’d always imagined, the men with cowboy hats and blaze orange vests, who rode in on horseback and photographed themselves with casual arms draped over the broken neck of a newly dead animal. The one with the blue sweater, who’d fired the fatal shot, held a small hatchet meant for butchering, spread his arms wide, and said, “Welcome to my kill.”

I remember the enormity of the animal, and the faint stuffy smell of its fur, damp with sweat and snow. I remember seeing the puddle of blood and thinking, This is where it all was. I remember its open brown eyes, wet with the glaze of death. I watched carefully its rear haunch, its massive chest cavity, not yet split open, fully expecting the lungs to heave once more, a hoof to kick a last-ditch effort at life.

I had never been closer to the source of my food. This was a far cry from a frozen, lab-created, fake MorningStar Chik’n. This was all blood, all body, all sweat and death. The body was still, as if in surrender. We left the three men to clean and pack the elk, and carry it out on horseback.

On the day of the hunt, by the time we made it back to the car, it had been dark for hours. It wasn’t until I sat down that I realized how freezing cold I was, feet soaking wet in the puddles inside my boots, muscles vibrating in sheer exhaustion, nothing left to give but warnings. I was done moving for the day. The drive back faded in and out of memory. Rick fed me chewable aspirin for my knees but didn’t take any for himself, saying his discomfort was on autopilot. Our headlights cut around the swerving mountain road out of the canyon and we spoke only in scraps.

“One thing I’ll remember,” I told him, “is how little advantage it turns out a gun is.”

After hours of hiking, walking carefully through woods, avoiding branch-snapping or rock-knocking, he got one shot off, one time, and missed from seventy yards away. The gun was the only chance he ever had at taking an animal, and that had surprised me.

And he told me this wasn’t how most people hunted. Mostly, he said, people get up before dawn and hike in while the elk are out for their morning feed. They camp out, in a tree or lying down, load their guns, and wait. They wait for the full, tired elk to return to their beds for the day, unaware, and they fire at them. That, he told me, was a lot easier.

I laughed a little. I couldn’t imagine such a thing as easy right now.

Marissa Landrigan's essays have appeared in The Atlantic, Creative Nonfiction, Orion, Guernica, The Rumpus, and elsewhere. She is currently an Assistant Professor of Writing at the University of Pittsburgh - Johnstown, and can be found online at marissalandrigan.com.