The "Not the White House Correspondents' Dinner" celebrated journalism while taking shots at CNN, Fox and Trump 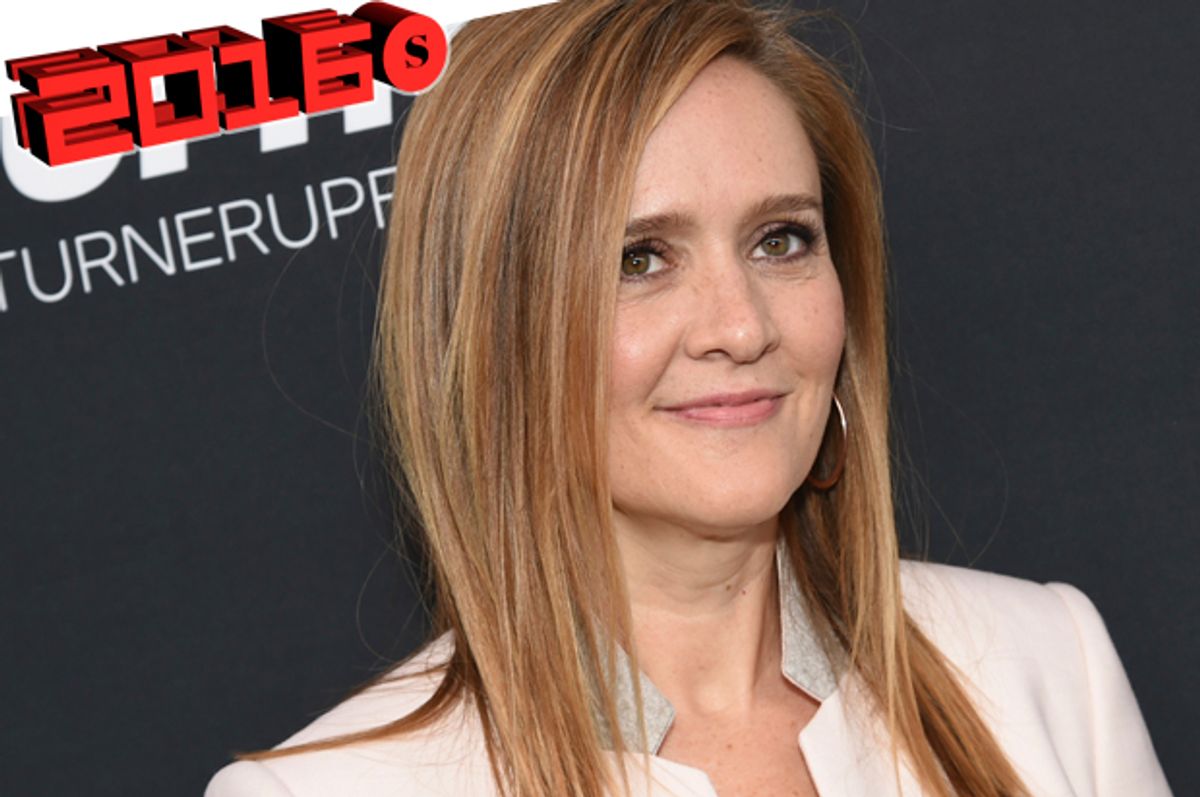 In addition to singing the praises of legitimate journalism, TBS's broadcast of the "Not the White House Correspondents' Dinner" highlighted the sanctity of truth over the Trumpian concept of "alternative facts."  Host Samantha Bee ran with this theme from the start of the special through its ending, but no moment demonstrated it more effectively than a taped parody inspired by "The Man in the High Castle."

In the segment, George Takei steps out of a dark alley and hands the host a vintage film canister. "Take this," he growls. "It's a way out!" Inside is a movie that shows an alternate reality where Hillary Clinton wins the presidential election and Bee roasts Madam President at an actual White House Correspondents' Dinner.

And in this other America, "the Patriots lost the Super Bowl, 'Lemonade' won Album of the Year, and every print of 'La La Land' spontaneously combusted," Alterna-Bee explains.  As soothing as all of that sounds, if that timeline had come to pass there would be no reason for the "Full Frontal" special to exist. That would be a shame.

From its first moments Bee made it clear that the "Not the White House Correspondents' Dinner" would be nothing like the White House Correspondents' Dinner.  At no point during Saturday's telecast did Bee feign reverence for the presidency or government, and at times her humor took on a blue tinge. The live audience's cheering echoed throughout the DAR Constitution Hall in Washington, D.C., where the special was taped.

Elsewhere on Saturday Hasan Minhaj, a correspondent for "The Daily Show with Trevor Noah," hosted the White House Correspondents' Dinner.  President Donald Trump declined to attend the event, making him the first president to break with that tradition since 1981. Minhaj roasted him in absentia — as did Bee.

"The maker of American Greatness Again ran away from the Vietnam War, he ran away from two different Republican debates, and now he's run away from the Correspondents' Dinner," she told the crowd of journalists and stars in her audience. "I guess we know why he wears those lumpy, ill-fitting old man pants — it's because he's constantly shitting himself!"

The "Not the White House Correspondents' Dinner" was a night of political-themed spectacle tailored for people whose understanding of politics and Beltway culture is informed primarily by television. This was clear from its cold open, featuring Allison Janney channeling her "West Wing" character, press secretary C.J. Cregg, calling on representatives of such news outlets as WakeUpSheepleNewbiz.org and Opus Dei.

Noticing a cub reporter in ranks, Janney muttered, "You're eighteen and in your father's suit. Obviously you're from Breitbart."

Though very much an extended episode of "Full Frontal," the special also served as a tribute to the sanctity of professional journalism and the irrefutable value of facts, illustrated in an absurdist sketch dubbed "What is facts?" featuring Peter Canby, head of fact checking for The New Yorker, Washington Post media columnist and "radical factualist" Margaret Sullivan, and Steve Buscemi.

Buscemi was among many actors who participated in the special's recorded segments, and the most star-studded of them included such comedy giants as Norman Lear and Carl Reiner, as well as Patton Oswalt, Paula Pell and Kumail Nanjiani taking their hardest shots at Trump.

By calling upon other voices to join in the fray, Bee made the event feel like an inclusive party in the spirit of her weekly series, albeit louder, rowdier and bolder. Over the course of a dynamic and highly structured 75-minute telecast, the "Full Frontal" host kept the tone light and brisk, praising the work of the Fourth Estate while skewering the powerful men and agenda-driven organizations responsible for dragging down its reputation.

Chief among her targets were CNN and its misguided direction under network president Jeff Zucker, and Fox News founder Rupert Murdoch, who she blamed for poisoning the concept of objectivity and dragging coverage to the right.

Referring to Fox's firing of its former chairman and CEO Roger Ailes and pundit Bill O'Reilly, Bee sarcastically quipped, "What a triumph for women that career sexual predators are finally getting what they deserve: $65 million dollars at age-appropriate retirement. Oh, justice!"

After thrashing Zucker's leadership, Bee summed up his work by saying, "CNN gives you news like your shitty boyfriend gives you orgasms. Either way, you end up lying in the wet spot, and he's snoring."

The highlight of the "Not the White House Correspondents' Dinner" was a surprise appearance by Will Ferrell who pulled his impersonation of George W. Bush out of mothballs for the event.

"How do you like me now, huh?" Ferrell joked in a heightened Texas twang, going on to give a shout-out to legendary press corps correspondent Helen Thomas.

"Helen Thomas scared the shit out of me until someone pointed out that she had been dead since 1954," Ferrell joked as W. "Helen Thomas asked tougher questions as a dead woman than any man at Fox News can ask today!"

At the end of the telecast, Bee told the audience that ticket sales for the "Not the White House Correspondents' Dinner" raised almost $200,000 for the Committee to Protect Journalists.