Picasso's weapon against fascism: Why "Guernica" is the greatest of all war paintings 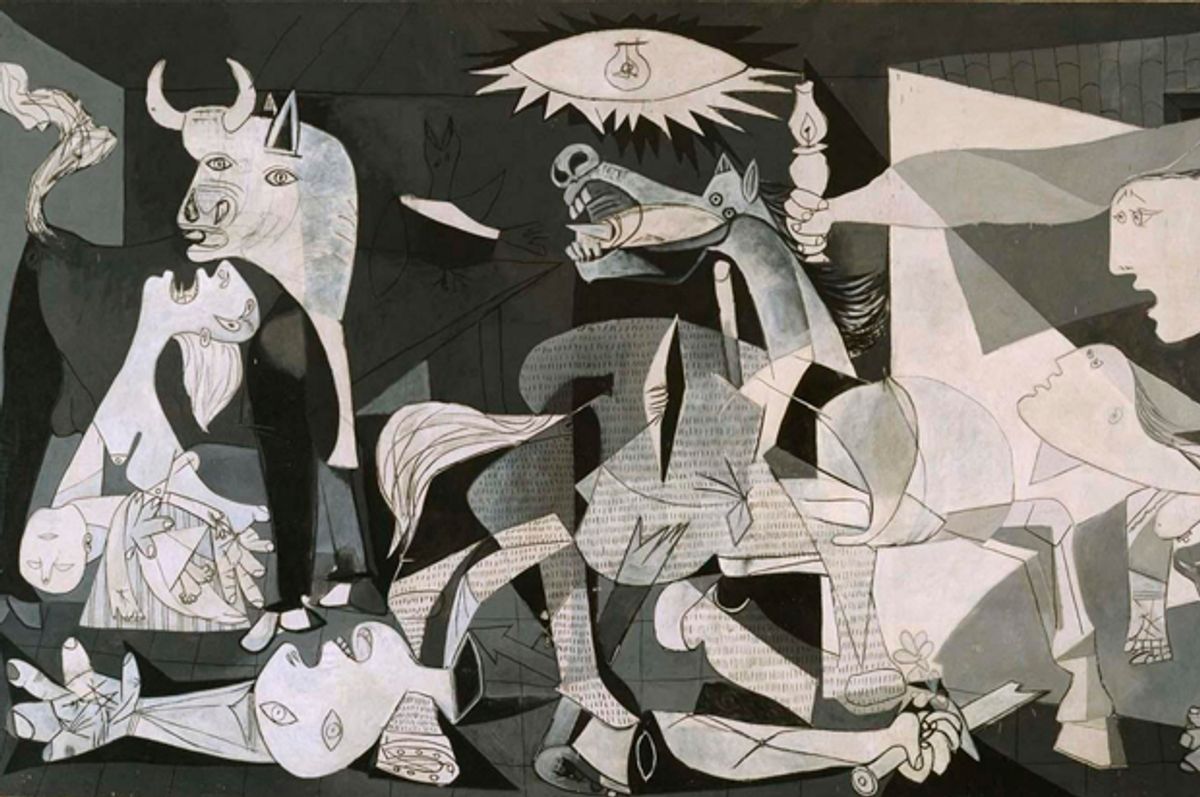 On April 26, 1937, during the Spanish Civil War, a swarm of fighter planes attacked the Basque town of Guernica, killing hundreds of civilians. The town was an important strategic center for the Republican forces, who were fighting against the Nationalist forces, the ultimate victors, led by General Franco. Guernica was the traditional meeting place for a Basque governmental body, but it was also the last defensible town for the Republicans, standing between Franco’s forces and the Basque capital, Bilbao.

Franco’s Nationalists were aided by German and Italian Fascists, and planes of the Italian Fascist Aviazione Legionaria and the German Luftwaffe Condor Legion provided the aerial assault ahead of Franco’s infantry, in an attack that was called Operation Rügen. In terms of military history, this was an important strike because the target was not military. It was, rather, a terror bombing assault on civilians, with no military presence in the town. The world looked upon the action with horror, recognizing that innocent civilians would not be exempt from war. It provided a frightening foretaste of the Second World War, showing that the Fascists, particularly the Luftwaffe, had no scruples about killing civilians. The attackers even chose Monday, the local market day, for the strike, to maximize potential civilian casualties.

By June 1937, Picasso had completed his monumental painting of this attack, "Guernica," considered by many to be his greatest painting, for the Exposition Internationale des Arts et Techniques dans la Vie Moderne at the Paris International Exposition, part of the 1937 World's Fair in Paris. The painting was then sent on a brief world tour, displayed in Scandinavia, London and New York. It helped to raise international awareness of the Spanish Civil War, and in the process spread Picasso’s fame.

It is also probably the most successful artwork about war ever created.

When approaching heavy subjects, like war and death and poverty, there tend to be three distinct strategies. The most heavy-handed and simplistic is the tug at the heartstrings, the melodramatic, Romantic realistic depictions of the honorable suffering. This is the UNICEF commercial approach, and it seems to work — to a certain degree — for almost everyone. At least, it works in terms of making people feel guilty, stoking compassion, drilling upsetting images into minds.

But there’s a question as to whether it prompts direct, responsible action. The second approach is the opposite, almost too cerebral: that is, to swap out realism for symbolism, allegory. An allegorical personification of disease; Mars as the embodiment of war; a woman wearing a blindfold and carrying a sword in one hand and a scale in the other, representing Justice. This is offers an intellectual, visual puzzle, but is unlikely to inspire anyone to join Doctors without Borders.

Then there’s the third approach, made famous not by a fine artist, but by a playwright. Bertolt Brecht developed “epic theater,” of which a key component was Verfremdungseffekt, or “alienation effect.” The idea was to no longer encourage the traditional, Aristotelian approach that the audience of a play (or viewer of an artwork) should engage with the artwork/performance with a “willing suspension of disbelief,” voluntarily pretending that what is happening on stage is real. Instead, Brecht wanted to make it clear that the audience was looking at a work of art, an artificial performance that nevertheless touches on real human emotions and issues. Epic theater was supposed to transform “the spectator into an observer” in order to encourage his “capacity for action, forcing him to make decisions.” This approach “punctures the complacent acceptance of character, motive, narrative, incident or resolution as fixed and unchanging, or obvious and inevitable.”

Brecht released the heartstrings in order to engage the minds of his audiences. He believed, and this has been found to be true, that spectators are more likely to be stirred to positive action if they are not bludgeoned into compassion. That too many photos of tear-stricken families prompts us to build up defensive barriers, to sympathize but then try to distance, to overlook, to dismiss, to rationalize that someone else will help. What percentage of us see an achingly sad UNICEF ad on TV and grab the phone to donate, as opposed to quickly changing the channel so as not to see upsetting imagery? Tackling the mind, instead, encourages further engagement, not defensive behavior.

To talk about war, to prompt change, to get the viewer to engage fully, a more cerebral and less Romantic approach tends to be more effective. As Rene G. Cepeda wrote, both Brecht and Picasso in "Guernica" used “art as a weapon for social change.” Both used their “soft” weapons against fascism. Cepeda cites Brecht’s text, “In the Fight Against Injustice Even Weak Weapons are of Use.” The paintbrush or pen can be mightier than the sword, provided said sword is not about to strike you and your pen down.

The chaotic nature of the scene depicted can make it difficult to pick out specific figures. The chaos is intentional, and wonderfully evokes the horror and disarray of the attack by disorienting the viewer into sympathy with the victims. The scene is a room that is open at the left side. Animals and people are involved in the commotion, and it is often difficult to distinguish one from the other. A horse has fallen, after being harpooned with a spear, and a bull stands beside a weeping mother and her dead child.

Some details of interest include: tongues replaced by daggers, a bull’s tail transforming into smoking flame, the severed arm of a soldier still holding a sword that sprouts flower petals, a wound in the open palm of the dead soldier (referencing the stigmata), and a light bulb that resembles the Evil Eye, a gypsy curse.

Art historians love to seek interpretations in art that may or may not have existed in the initial concept of the artists. For instance, much has been written about the symbolism of horses and bulls in Spanish culture (referencing bull fighting, for instance), and about Picasso’s tendency to use the Minotaur (half man, half bull) as a sexual symbol. When asked about the symbolism, Picasso said, "[T]his bull is a bull and this horse is a horse . . . If you give a meaning to certain things in my paintings it may be very true, but it is not my idea to give this meaning. What ideas and conclusions you have got, I obtained too, but instinctively, unconsciously. I make the painting for the painting. I paint the objects for what they are."

That sums up nicely the general approach to finding symbolism in 20th-century art. It might be there, it might not. Your personal interpretation is what counts, what you the individual viewer feel the work is about. In this painting, over-interest in symbolic meaning can miss the point. The overall feeling of horror and chaos is more important than what the component parts symbolize.

Picasso shifted through a number of stylistic periods, his work growing ever more abstract. His concept of Cubism, in which naturalistic images (such as still-lifes or portraits) are broken up into constituent basic geometric forms that are then shuffled like a dropped deck of cards, later shifted into putty-like shapes and bodies, without weight, with elastic boundaries that could be altered and twisted at Picasso’s will. The goal was to create a work more dynamic, absorbing and inspiring of wonder than any realistic painting could achieve.

For this work, a realistic image of the bombing of the town of Guernica, with corpses and screams in the night, would likely have felt melodramatic, saccharine, difficult to look at. It might have been Romanticized or it might have been so gritty that our reaction would be to shut down our ability to sympathize, as a defense mechanism. The figures are almost cartoonish, but then of course, when you look more closely, when you know the context, they are not. But the childlike abstraction pulls us in, whereas the same subject, handled as a photorealist blood-fest, would repel us.

Throughout its existence, this painting has been at the heart of drama and controversy. While living in Paris during the Nazi occupation, Picasso was harassed by the Gestapo. One officer is said to have seen a photograph of "Guernica" in Picasso’s apartment and asked, with disgust, “Did you do that?” Picasso responded, “No, you did.”

Like all great art, its power transcends time, and can symbolize something current and topical for individuals of any era. During the Vietnam War, the painting became the backdrop for anti-war vigils in the museum. These were quiet, poignant protests against the horrors of war. But in 1974 an Iranian political activist, who claimed to be protesting Richard Nixon’s pardon of William Calley after his role in Vietnam’s My Lai massacre, vandalized the painting, using red spray paint to write “KILL LIES ALL” across it. The paint was easily removed and the work undamaged.

The vandal, who ironically later became an art adviser, waxed philosophical when interviewed six years after his attack. When asked why he did it, he said: "I wanted to bring the art absolutely up to date, to retrieve it from art history and give it life. Maybe that's why the Guernica action remains so difficult to deal with. I tried to trespass beyond that invisible barrier that no one is allowed to cross; I wanted to dwell within the act of the painting's creation, get involved with the making of the work, put my hand within it and by that act encourage the individual viewer to challenge it, deal with it and thus see it in its dynamic raw state as it was being made, not as a piece of history."

In this quote, he shows the slanted rationale of so many aggressive political protesters. He does not possess the subtlety to recognize that "Guernica" has been alive and pertinent to every generation since its creation, and has never been relegated to mere history. And while his action was damnable and, for all he knew, could have ruined the masterpiece forever, the fact that "Guernica" inspires such passions is a testament to its power and its enduring resonance in all eras.

There is a reason why painting is not photography, but it was not always known. There have been times when painting strove for naturalism -- to reproduce, as accurately as possible, what the eye sees in life. There have been times when what the eye sees is soiled, obscure, tainted by inhumanity. At one time, painting strove to show the perfection that must surely exist only in Heaven. That was the High Renaissance of Raphael. When that perfection had been captured, painting strove to distort what the eye sees, to distort that perfection for dramatic effect. That was the Mannerism of late Michelangelo. This is the true essence, the true power of painting. When photography arrived, painting no longer needed to reproduce our vision. And painting once again retreated from naturalism toward where it was most effective.

Welcome Picasso’s Cubist abstraction. No naturalistic scene could be as true to the real sensations and feelings of destruction, death and war as the broken shards of life in Picasso’s "Guernica." A portrayal of the gratuitous bombing of the Basque historical town, Picasso’s bent and shattered creatures are made of concentrated pain, which passes on to the viewers, trapped in blocks of line and color, for us always to remember the capability of man to hurt man.