From Russia with hate: How Putin’s anti-LGBT crackdown led to the persecution of gay men in Chechnya

Being gay is no longer a crime: The cops usually just interrogate and torture you and leave the killing to family 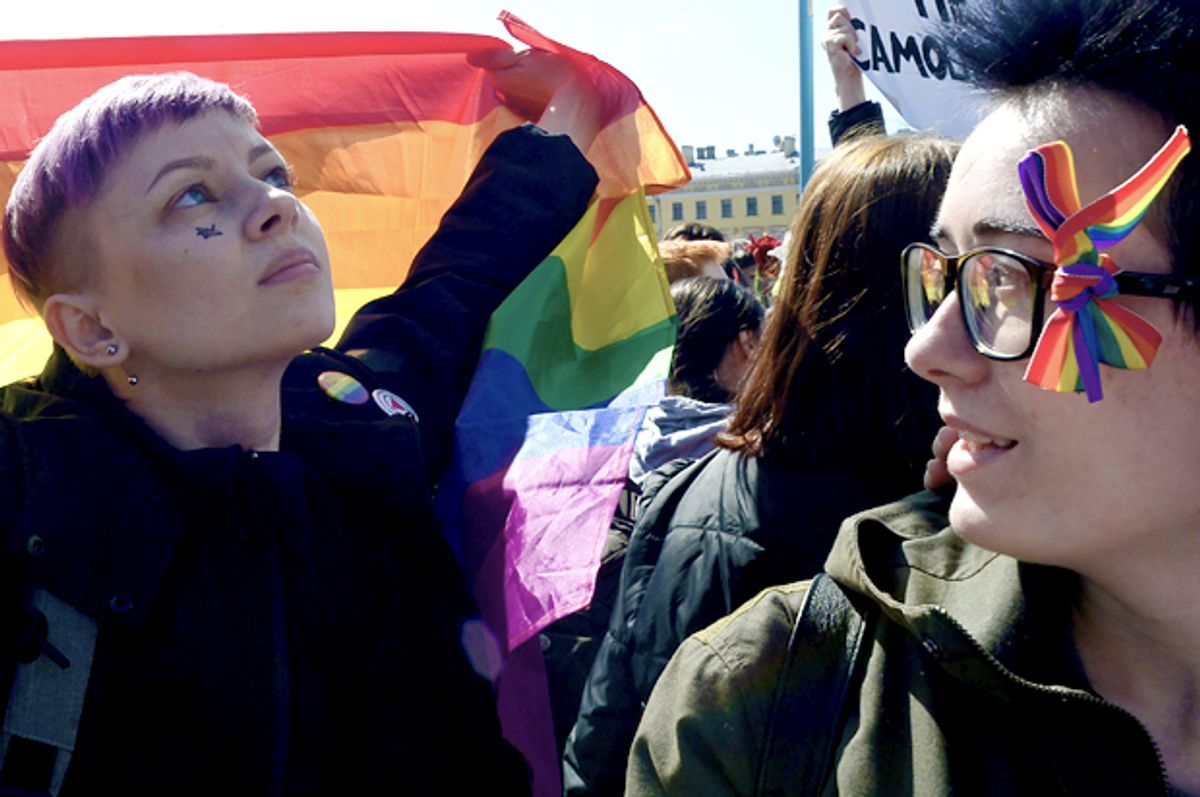 Lyosha Gorshkov was beaten so badly that his face was paralyzed for six months. Gorshkov, a former political science professor, was drinking with friends at a bar when he was pulled out of his seat, thrown to the ground, and curb stomped by a group of men. Gorshkov lost consciousness during the attack, and when he woke up, the men were still beating him, but he could no longer feel the furious blows from their boots due to the shock. When the hospital where Gorshkov was taken reported the incident to Russian police, authorities dismissed the case when they found out that the victim was gay.

“We’re not going to open up the case because you’re a ‘faggot,’” Gorshkov remembered being told. “You should blame yourself.”

The recent persecution of gay men in Chechnya, a conservative Muslim republic in the Russian Federation, highlights the brutal violence to which LGBT people have long been subjected in the region. Whether it’s the honor killings and concentration camps in Chechnya or a Russian anti-gay propaganda law that makes it difficult to live life openly as a gay person, the current system perpetrates a culture of fear and silence that forces many into the closet. To be outed means risking violence and even death.

Novaya Gazeta, an independent newspaper in Moscow, made international headlines last month when it reported that Chechen police were rounding up gay men in the once war-torn region and throwing them in prison. The news outlet, which has been besieged by threats of violence since the reports went public, estimated that there are six secret detention facilities in the tiny Russian republic.

Ramzan Kadyrov, the Chechen leader known for governing the state with an iron fist, has denied the reports, which include claims of shock treatment and horrific beatings in order to obtain the names of other gay men. A spokesman for Kadyrov, Alvi Karimov, has claimed that the allegations are an “absolute lie,” denying that LGBT people even exist in Chechnya. Karimov said, “If such people existed in Chechnya, law enforcement would not have to worry about them since their own relatives would have sent them to where they could never return.”

Chechnya’s minister of the interior has called the reports an “April Fools’ joke.”

President Vladimir Putin’s spokesperson has also claimed there’s “no evidence” that gay men are being targeted by police, even though his government has been persecuting the LGBT community for years. As LGBT advocates explained, the persecution of LGBT people in Russia is commonplace and it has only intensified under Putin’s watch.

From the Belle Époque to a living hell

Yury Gavrikov, a gay rights activist in Russia, claimed that things weren’t always this way. Sodomy, which had been prohibited under Article 121 of the criminal code, was decriminalized in 1993 by former President Boris Yeltsin. Under the prior law, being found guilty of homosexual acts could result in as much as five years of hard labor. Gavrikov said the 1990s ushered in a new era of relative tolerance. It was common to see openly gay singers and celebrities on television, such as during the country’s annual New Year's Eve broadcasts. Anton Krasovsky, a former journalist, compared it to France’s Belle Époque.

“It was years of Russian glamor and big money,” Krasovsky wrote by email. “Moscow was a capital of nightclubs and gay life. In Moscow and Saint Petersburg, there were huge gay clubs for thousands people.”

That changed in 2012 when Putin, who served as president from 2000 to 2008, came back into power. Putin enacted a law known by the cumbersome title “For the Purpose of Protecting Children from Information Advocating for a Denial of Traditional Family Values.” The 2013 legislation, which earned a unanimous thumbs up by the State Duma, banned the spreading of “propaganda for non-traditional sexual relations” to minors. Presenting homosexuality as a normal lifestyle acceptable to society would be subject to a fine, and Gorshkov said the state-controlled media began to subsequently brand LGBT people as child predators and rapists.

“Life in Russia became really hard after 2013,” claimed Svetlana Zakharova of the Russian LGBT Network. “Many open LGBT people were beaten and fired. That’s when the real witch hunts began.”

Following the crackdown on gay life in Russia, Gorshkov was forced out of the university job he had held for 13 years. The professor had long been a vocal advocate for LGBT rights, but he began to receive “physical and verbal threats” and was targeted by the Federal Security Service, the modern equivalent to the KBG. An agent called Gorshkov into his office one day looking for the names of other gay men, and when the lecturer refused to cooperate, he was followed. A story later circulated on social media that Gorshkov and a male colleague were promoting sodomy at the university.

“We were all of a sudden treated like enemies of the state, national threats, and spies,” Gorshkov said.

Krasovsky, who came out during a news broadcast in protest of the anti-LGBT laws, claimed that in Russia it’s always been “difficult to live openly, freely, and brightly,” even during the relative freedom of the 1990s. Same-sex couples have never had the luxury of holding hands in public in a country where legislators have banned pride parades for a century.

But L.P., who left Russia to escape its culture of persecution, explained that the recent laws have forced LGBT people underground.

“Clubs are located in industrial zones on the outskirts of the city,” said L.P., who requested anonymity for fear of his safety. “These are not the kinds of establishments that you can easily see on the street — sitting next to McDonald’s or Starbucks. It’s horrifying, totally degrading and humiliating.”

The iron fist of Putin’s strongman

If being lesbian, gay, bisexual or transgender in Russia was already difficult enough under Putin’s rule, Kadyrov has made these struggles even worse.

In 2007 Putin appointed Kadyrov as the president of the Chechen republic, which enjoyed a brief period of independence from Russia until the Second Chechen War in 2000. Rachel Denver, the deputy director for Europe and Central Asia at Human Rights Watch, said that Putin installed Kadyrov, who actually had fought against Russia in the First Chechen War, to deal “very harshly with the militant insurgency.” Denver claimed that to wipe out the independence movement Kadyrov has treated Chechnya “like his own personal dictatorship,” deploying an “extreme form of tyranny.”

“He rules above the law,” Denver said. “Many of the practices that take place in Chechnya violate Russian laws. Only he’s allowed to get away with them.”

Although the recent Novaya Gazeta investigation shined a light on the police detainment of gay men in Chechnya, Denver claimed this is not a new phenomenon. She alleged that it’s been “going on for years.” Law enforcement officials in Chechnya frequently blackmail gay men, often videotaping them as authorities force prisoners to admit to homosexual acts, she said.

Gorshkov said, though, that the men on these tapes are not always gay. He claimed that the state often rounds up its political enemies — including “NGO leaders, community leaders, and business leaders” — and obtains false confessions through torture.

“This video will be sent to their families, and they will be shamed publicly,” Gorshkov said.

These routine outings of gay men and political dissidents, as Denver explained, can be deadly in a “very traditional Muslim society” where LGBT people are considered a “stain on the family honor.” The public humiliation of having a gay family member can lead to complete and total ostracism for an entire household. If a woman is engaged to be married and her brother is gay, the future husband’s family may oppose the match until the family is cleansed of this embarrassment.

“The Chechen authorities exploit that,” Denver said. “After they detain and torture these men, they release them to their families, saying, ‘He’s gay, you know what to do.’ The assumption is that they will commit an honor killing.”

Gorshkov said that gay men in Chechnya are often forced into an impossible situation. Either they stay in the region, marry a woman, and remain in hiding for the rest of their life — but always fearing what could happen if someone discovered their secret — or move to a more accepting area of the country, like Moscow or St. Petersburg. But even if they make it out of Chechnya, that doesn’t mean they won't be followed, with an attempt made to kill them, he claimed. Gorshkov, who now serves as the president of RUSA LGBT, said that he has been in touch with a transgender woman whose relatives cut out her breast implants when she tried to flee home.

Gaining safe passage out of Russia

Although Novaya Gazeta has estimated that as many as 20 men have been killed by Chechen authorities, LGBT advocates in Russia and abroad are working to try to make sure that the death toll doesn’t continue to rise.

Zakharova said of the 75 people who have contacted the Russian LGBT Network through its hotline, the group is now providing material support to 30 people. That includes helping to evacuate them from Chechnya. Rainbow Railroad, a nonprofit based in Toronto, is assisting gay men in obtaining visas to countries like Canada or the United States. The organization also helps LGBT Russians with the difficult process of claiming asylum, one that has become more arduous in the U.S. under the new presidency. Although U.N. Ambassador Nikki Haley has condemned the detainment of gay men in Chechnya, Trump has remained silent.

“The work we do is like a triage,” said Kimahli Powell, the executive director of Rainbow Railroad. “We can lead people to a place that’s safe, let them know what to do when they land, and give them organizations that are safe in the country that they arrive to.”

Rainbow Railroad’s efforts received a huge boost last week after Facebook helped raise more than $110,000 to help finance the organization’s mission. Powell, though, said that LGBT advocacy groups will continue to face a major uphill battle in an environment where many persecuted gay men may not have the ability to safely contact international aid organizations, especially if they’re being watched by authorities. “We’ve had difficulty identifying cases,” Powell said.

It’s become even more critical for groups like Rainbow Railroad to help LGBT people gain safe passage out of Chechnya following reports that Kadyrov plans to escalate his campaign against gay men. Alan Duncan, a British foreign minister, has claimed that the Chechen president “wants the [LGBT] community eliminated by the start of Ramadan,” which starts on May 26. Although Duncan claimed to have had numerous meetings with Russia’s deputy foreign secretary, Vladimir Titov, the Kremlin has yet to respond to the new allegations.

Kadyrov denied the claims, calling them “provocative” and a “massive information attack,” even as many gay men in Chechnya remain missing.

Will Putin's government take action to address a crisis that, in many ways, stems from problems created by his own regime? LGBT advocates likely got their answer on Monday when protesters in St. Petersburg, who came out to march on the Anichkov Bridge in the city's center, were apprehended and detained by police dressed in riot gear. Reports indicated that at least 10 people were arrested, and press photos showed law enforcement officials dragging LGBT rights activists away as they lay in the street wrapped in rainbow flags. It’s just another day in Vladmir Putin’s Russia.