When a JCC near my home was targeted in a bomb threat, practicing Judaism felt like a crucial act of resistance. 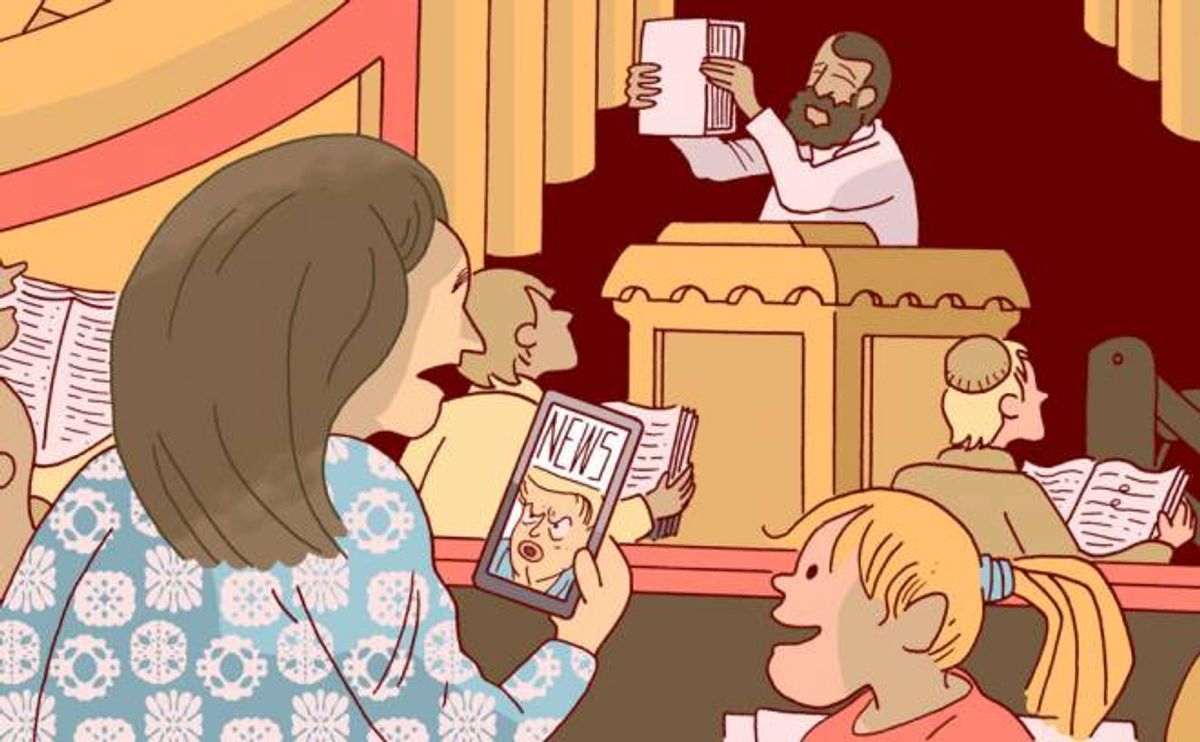 I held my toddler’s hand as I walked her into a synagogue for the very first time, her father and infant sister following behind us. With every concrete step almost as tall as her little legs, climbing each one felt like a monumental accomplishment for her, even with my help.

We entered the narrow room full of Rachels and Sarahs, were introduced to Eli and Abraham, and found an empty carpet square to sit on, claiming our place in the circle. With my daughters in my lap and my husband to my left, the familiar words began, and the songs and prayers of my childhood filled the room. “Shabbat shalom, hey!” sang the room in chorus. I watched my daughter look around in wonder. My usually shy child didn’t look nervous, the way I’ve come to expect she will in new situations. She soaked it all in, a smile spreading across her face.

Read more Narratively: A Trip to See Her Ailing Sister. The First Visit With His Mom in Years. With a Stroke of Trump’s Pen, All Canceled.

The rabbi handed my toddler a wooden replica of a Shabbat candlestick and she clutched it in her small fingers. At the end of the song, she declined to give it back, holding it to her chest like it belonged to her. “Can we light the candles?” she asked me. I assured her we would.

Until recently, I had considered myself a non-practicing Jew, a reformed atheist who found my way back to some sort of spirituality and began to embrace the cultural history of Judaism that I was raised with. Growing up in a predominantly white, majority Jewish town in South Florida meant that I lacked much of the social context of what it meant to be Jewish in the world. I thought the Holocaust was in the distant past, something that had no relevance to the present day. I had never experienced discrimination or prejudice because of my religion.

I learned the stories from the Torah but never learned the real meaning behind them. As far as I was concerned they were just that: stories. Stories in the way "Harry Potter" is a story. Stories about splitting the sea, about flooding and arcs, about enslavement in ancient Egypt. Stories that did nothing to help me understand the world or my place in it. And so, I turned away from the faith I was raised with.

But then I had children, and suddenly it seemed incredibly important to make sure that Judaism was present in our home. I felt an urge to ensure that we — and they — were connected to our culture, to understand where our family came from. My husband’s history with Judaism was much like mine, but we hung mezuzahs on our doorframes, displayed menorahs decoratively. I started asking my grandparents questions about our history, the stories of how their families emigrated from Russia at the turn of the twentieth century.

Read more Narratively: The Millennials of Afghanistan Have Never Known a World Without War. So Why Are These Kids So Hopeful?

My grandmother took a bunch of photo albums and boxes down from a closet and told me about how her mother’s family name was shortened — Americanized — after they passed through Ellis Island. I sifted through the photos, examining each one and listening to the stories my grandmother remembered about the people staring back at me in shades of black and grey, chins and noses pronounced, hair dark.

These pictures of people that I had never met, would never meet, became some of my most prized possessions. I collected them like valuable jewels, finding them the perfect frames and arranging them in a gallery wall in the stairway of my home, reminders of where and who I came from. We settled down in a neighborhood of Boston where my grandfather had grown up, one that used to be predominantly Jewish but whose demographics had changed during white flight to the suburbs two generations ago. The giant churches we’d drive by every day still bore remnants of that history — Hebrew letters carved into the stone above the entryways.

We began shopping around for synagogues when I was pregnant with my oldest child, but never committed to attending a service. It was something we wanted to do but not something we wanted to do enough to follow through with it. We attended a Passover seder at a friend’s house; lit Hanukkah candles at our own. But still, I felt a disconnect from my faith. I was just going through the motions for the sake of my children. At this rate, Judaism would mean as little to them as it did to me.

But then a news alert came across the screen of my phone, three days before Donald Trump’s inauguration. The Jewish Community Center (JCC) a few miles from my home had been evacuated following a bomb threat. I felt my palms begin to sweat as I stared at the notification in disbelief, jaw slightly slack. The room became very small as I focused on the little screen on the table in front of me; it was almost like my vision had become tunneled and unable to look anywhere else. I was sitting in the dining room of my home, the room with neon chartreuse walls, but everything looked black.

Not here. Not now.

My mind traveled back to the JCC near my childhood home. The sprawling compound, the basketball courts, the pool, the community room where dance classes were held. I hadn’t stepped foot into a temple since my Bat Mitzvah almost two decades before, and had spent the years since only tangentially connected to my Jewishness, but suddenly it was the only thing that mattered. Anti-Semitism, which until this time in my life has been only a theory, instantly became incredibly real. Even here in the liberal bubble of Massachusetts, hatred is alive and well.

Suddenly, the relative safety and privilege that I grew up with as a white American Jew has cracked wide open, revealing the rotten underbelly that’s always been here, the one I have chosen not to see. Anti-Semitic hate crimes are at their highest levels in years. Jewish Community Centers around the country are getting bomb threats at an alarming rate. Steve Bannon, an anti-Semite, is in the White House. Swastikas appear like hideous confetti, decorating walls and buildings all over the country. Jewish cemeteries have been vandalized. This hatred is not new; it has been here all along. But its brashness is something new. It is meaner, darker, more ominous. It is more urgent. It is knocking on my door, begging to come in.

And while President Trump may have reminded us about his Jewish family members, and assured us at a recent press conference that we’re “going to see a lot of love” under his administration, so far, I don’t see it. And using his family to prove he isn’t anti-Semitic is about as effective as using one’s black friend to prove they’re not racist. It’s empty, hollow, a silencing tactic. Of course, there are other communities that have much more to be afraid of under Trump’s reign, marginalized people whose fears are more urgent and are already playing out in devastating ways via ICE raids, deportations, and imminent threats of violence. People of color in America who have been afraid their entire lives, for whom this kind of fear is not new. A fear that my grandparents and their parents felt, that my own children may, too. A fear that has turned walking into synagogue with my family into an act of bravery.

Now more than ever, I want to teach my children what it means to be Jewish. Our faith has a long history of resistance: no matter how many times history has tried to erase us, to wipe us out, we have survived. We have resisted our own demise and we have fought for the rights of others. Our people were active in the Civil Rights movement and fighting alongside black folks in the 1950s and 1960s. Today, my family has Black Lives Matter signs in our home and on our shirts. Before my oldest daughter could even walk, she marched with me as a Jew for the liberation of Palestine, strapped to my chest in a sling.

We come from the oppressed and, mostly, we have become privileged through the assimilation of many Jews into whiteness. But with assimilation and privilege can come complacency, which is something that many white Jews like myself and the people I grew up with can fall into all too easily. It is through complacency that we forget even the recent past, the Holocaust of only two generations ago. It is through complacency that we can become perpetrators of the oppression we were once victims of via a vote for Trump or a belief in marginalized people’s ability to “bootstrap” their way to success.

Our family name is not Jewish; it would be easy for us to hide, to go unnoticed. Instead, we will teach our children to do what our people have done for thousands of years. When times get dark, we step into the light. As our country becomes a scarier place to be Jewish, our act of resistance is to embrace our faith and our culture with both arms. It is through turning towards, instead of turning away, that we connect to our roots as oppressed people. And it is this Judaism, the one that centers the fight for justice, that I connect to; it is the one that finally makes sense. Instead of turning away from our community, we are choosing to become part of it for the first time in our adult lives.

As the group in the synagogue headed downstairs for the dinner portion of the Shabbat evening, my timid child had darted out of the room ahead of us to follow the group, never looking back to see if we were there. “Come on, Mom and Dad!” she shrieked, her excitement bouncing off the walls, carrying down the hallway. “This way!” Her small feet, in her grey boots with the pompoms on the sides, pitter pattered in a half-run, half-walk toward the stairs. I scooped up her sister and raced after her.

We were home. I knew it in my gut and so, apparently, did my little girl. When we returned a second time because my daughter had been asking to go “back to Shabbat,” I became overwhelmed with emotion, choking on the words of the HaMotzi in a room full of people who also knew the words. “We give thanks to G-d for bread/ Our voices rise in song together/ As our joyful prayer is said.”

My kids are still too young to understand what this means, but they will. We will be registering my daughter for Hebrew school in a few months, when she’s old enough to attend. We have chosen to join the congregation, paid our membership dues. My girls will know what it means to turn to a community of people that share her identity, an identity that has historically been persecuted and marginalized, and to find safety and belonging within it. They will know that when times get hard, we can turn to each other and make it through.

Our existence is resistance in and of itself, but it’s time to do more. Today I teach my children to assert our faith and become part of a Jewish community when once again the world tells us that we don’t deserve to exist. But we do deserve to exist, and we will fight for that right, just like we always have.