Will this be the biggest May Day ever in the US? 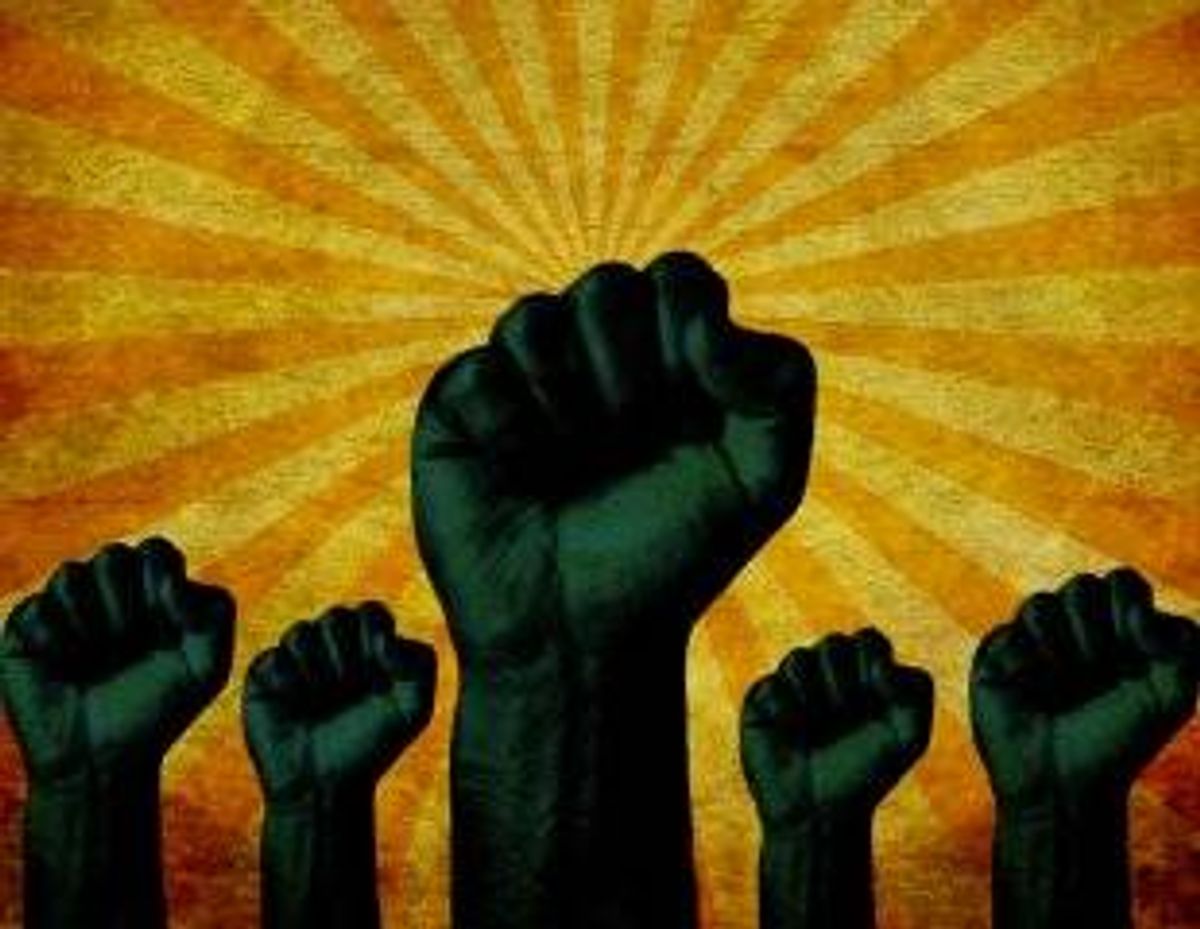 May Day, falling on the weekend of Donald Trump's destructive first 100 days, makes for much symbolism in the struggle for justice and the soul of America. While Trump and his administration arbitrarily and ineptly attack immigrants from all over the world—especially Muslims—and the administration works to undermine labor rights across the board, hundreds of thousands of people will be pushing back, striking and protesting Monday in what is shaping up to be the biggest May Day demonstrations in at least 40 years.

The biggest and one of the most unified actions will be in Los Angles, a Democratic stronghold and sanctuary city with a vibrant labor movement and home to hundreds of thousands of immigrants, many of them undocumented.

Kent Wong, the director of the UCLA Labor Center and a vice president of the California Federation of Teachers, explains that this May Day “is being spearheaded by the Los Angeles County Federation of Labor, representing more than 800,000 union members. Some of the most dynamic labor organizing campaigns in Los Angeles have been led by immigrant workers, including janitors, hotel workers, home care workers, food workers, and car wash workers.”

The massive show of strength and solidarity by the labor movement in L.A. and elsewhere is a relatively new development. Wong explains: "Although May Day grew out of the struggle for the eight-hour day in Chicago in 1886, for generations the U.S. labor movement had refused to stand in solidarity with global worker celebrations on May Day. One of the largest May Day demonstrations in U.S. history occurred in 2006, in opposition to draconian anti-immigrant policies being proposed by U.S. Congress."

Now according to Wong, 120 years after the first May Day in Chicago, “the spirit of May Day has returned to the U.S. led by a new generation of immigrant workers.“

There is large-scale mobilizing in Los Angeles for May Day, with labor unions joining workers' centers, immigrant rights groups, faith-based networks, and community organizations. Wong says, “Many unions are encouraging their workers to engage in a one-day strike. The broad-based coalition has united with leaders of the women’s march, which mobilized the largest women’s demonstration in history the day after the inauguration. This growing labor and community alliance is also credited with the recent victory of the campaign for the $15 minimum wage in Los Angeles and California.”

On the national level, the hope of many is that May Day 2017 will build lasting alliances for immigrants' rights, workers' rights and social justice, to lead the resistance against Trump and to build a broad-based movement for change. Much of the energy for change is coming from the immigrant community.

Wong explains: “While fear of deportations in immigrant communities is high, there is also tremendous courage and resilience. Immigrant youth led walks-outs on college and high school campuses throughout California the days after the Trump election. The campaign to advance sanctuary for immigrants is spreading throughout the country. People of conscience are repulsed by the hateful, anti-immigrant rhetoric of the Trump administration."

Push for Freedom Cities in NY

Among the activities in New York on May Day is the push for Freedom Cities, a vision that goes beyond sanctuary cities. According to organizers, the goal is “to live in cities without fear, where communities control the resources they need to thrive. Freedom Cities is an intersectional movement that seeks to redefine safety, making entire cities, towns, and communities safe for immigrants, black people, workers, Muslims, trans and gender nonconforming people, and all oppressed communities.”

“I am going out on May Day for all of us workers," says Lydia Tomlin, member of the Restaurant Opportunities Center and the New York Worker Center Federation. She continued, "We are immigrants, women, LGBTQ, people of color, and we work in industries across the city. Without our labor, who will serve New Yorkers their coffee, stock their shelves, clean their houses, construct their buildings? Who will make NYC run?”

Marchers from Freedom Cities, including the Black Alliance for Just Immigration, Black Youth Project 100, Million Hoodies, Beyond the Moment, New York Worker Center Federation, and other allies will join the 6th Annual Immigrant Worker Justice Tour, which highlights the struggles of over a dozen social justice campaigns across NYC and elsewhere, with stops throughout downtown Manhattan calling out police and corporate abuse.

Especially noteworthy about the May Day activities in New York and across the country is the amazing diversity of cultures and of workers, many with common cause provoked by threats from the Trump administration, ICE and security and police forces looming over many communities.

This May Day, according to Zoe West, an organizer with the New York Worker Center Federation (NYWCF), the Freedom Cities effort is “particularly focusing on the issues of economic justice and criminalization with a focus on redefining safety as being about investing in communities rather than investing in more policing.”

West adds, “Through the growing Freedom Cities coalition, there has been increasing focus on how criminalization is an issue affecting people across a range of communities: immigrants, African Americans, Muslims, low-wage workers and more.”

In Atlanta, Georgia, racial justice organizers will join in solidarity with The Majority, a new coalition of more than 50 social and racial justice organizations across the country, in leading May Day actions "to put forth a truly collective vision of economic justice and worker justice that centers black people, women, LGBTQIA people, immigrants and undocumented people and those that live at the intersections of multiple identities."

While at this point an historical footnote, May Day celebrations in 1970 and 1971 were watershed protest events in a different era when there was a raging fight to stop the war in Vietnam and rein in corporate power. The invasion of neutral Cambodia by President Richard Nixon and Secretary of State Henry Kissinger was the spark that produced a massive outpouring of anger, with large-scale protests In May Day 1970 on hundreds of campuses and in many cities.

Protests led to the shooting of Kent State College students by Ohio National Guardsmen on May 4, 1970, leaving four dead and nine wounded. In the public mind, this still ranks as one of the most startling examples of excessive police abuse in U.S. history. Shockingly, 11 days later, at Jackson State College (now Jackson State University) in Jackson, Mississippi, a group of students were confronted by city and state police. Shortly after midnight, the police opened fire, killing two students and injuring 12.

On May Day in 1971, people didn’t just march on Washington, they shut it down. Roughly 25,000 protestors calling themselves the May Day Tribe blocked roads with cars, trash cans and their own bodies in order to prevent government employees from getting to work across Washington and at the major bridges and roadways leading into the city. Seven thousand or more were arrested (including yours truly), probably the most ever at a U.S. protest.

So May Day, which is a national holiday in much of the world, has a long complex history, starting from the protests in Chicago for the eight-hour week in 1886, which led to the Haymarket massacre, when a bomb was thrown at police by a never identified individual and the police retaliated by shooting protestors. Overall, seven police officers were killed and 60 wounded, an estimated eight civilians dead, and another 40 injured.

As Kent Wong reminds us: “One of the most powerful slogans that emerged from 2006 May Day is, “Hoy marchamos, manana votamos!” “Today we march, tomorrow we vote!”

The alliance between labor, immigrants, and communities of color in California and elsewhere has resulted in powerful progressive political victories that have rejected Trumpism and the right-wing Republican machine over the last 10 years. This is a movement that must spread throughout the country to embrace a progressive vision for the future.

Let's hope that May Day 2017 is the biggest yet and keeps building the movement against Trump and the right-wing forces in this country.

Don Hazen is the executive editor of AlterNet.