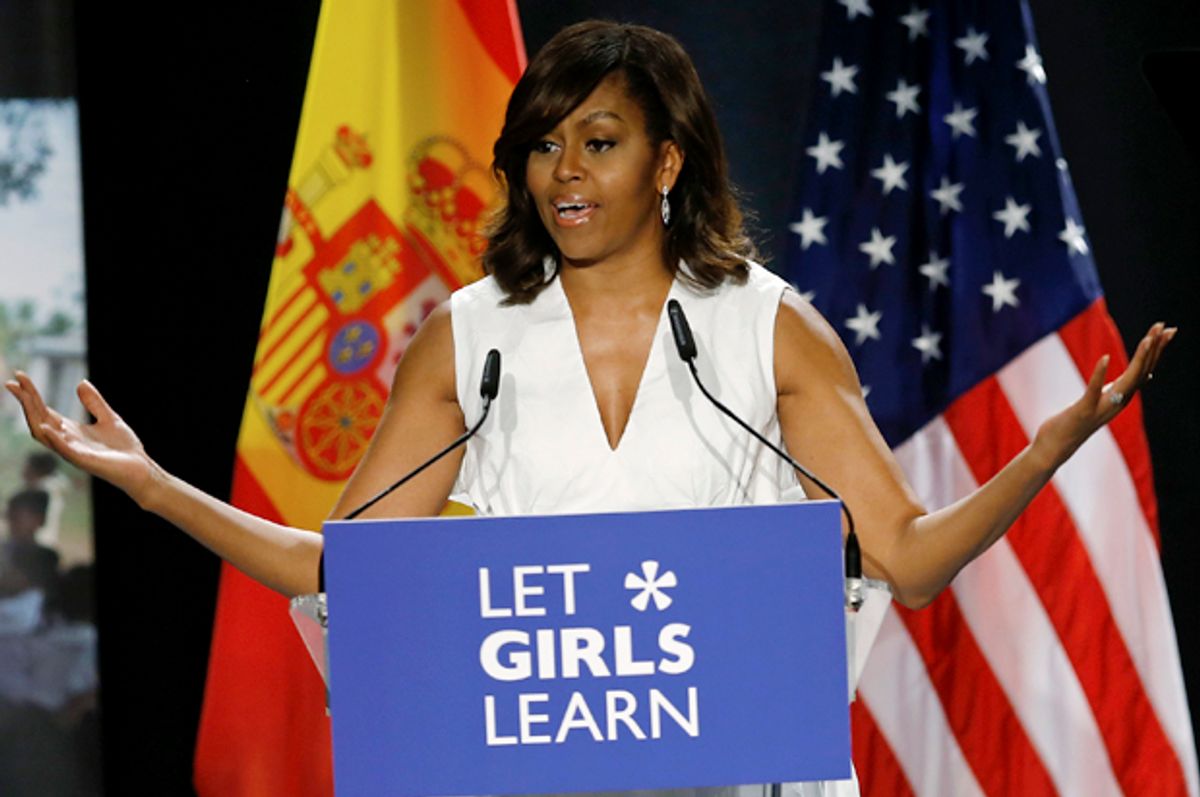 Michelle Obama gives a speech on her "Let Girls Learn" initiative to a group of girls and young women in Madrid, Spain, June 30, 2016. (AP/Francisco Seco)
--

President Donald Trump has proudly boasted of his use of a little-known law that allows him to systematically dismantle many aspects of his predecessor's legacy, but his administration has been more muted about its efforts to roll back the historic work of Michelle Obama. On Monday, Trump officials quietly announced that they're looking to whittle away two education and health initiatives created and championed by the former first lady.

As his first major action in office, newly confirmed Agriculture Secretary Sonny Perdue traveled to a school in northern Virginia to announce his plans to stall one of Michelle Obama’s signature accomplishments in her famous fight against childhood obesity: stricter nutritional standards for school breakfasts and lunches, which feed more than 31 million children.

Perdue announced that his department would freeze the implementation of aggressive standards on school lunches set as part of Obama’s “Let’s Move” campaign, at a school 30 miles southeast of where the former first lady announced her initiative in 2012. Now schools won’t have to cut the salt in meals, and will be free to serve kids fewer whole grains and more sweetened milks.

Current rules require schools to limit salt and fat, while serving more fruit, vegetables and whole grains. while limiting salt and fat. Conservatives have long complained about the first lady’s influence and her push for a healthier lifestyle -- with the sarcastic #ThanksMichelleObama hashtag often accompanying photos of unappetizing lunches on social media -- even as the Centers for Disease Control and Prevention estimated that one in six American children were obese in 2015.

“If kids aren’t eating the food, and it’s ending up in the trash, they aren’t getting any nutrition — thus undermining the intent of the program,” Perdue said as dozens protested outside a Leesburg, Virginia, school on Monday. Perdue, a former Republican governor of Georgia, said some schools in the South have had problems with grits because “the whole grain variety has little black flakes in it.”

Perdue ate chicken nuggets and salad with a group of fifth-graders after he announced the rollback of Obama’s program, which has now been in place for five years.

Two days after Michelle Obama mentioned another one of her signature campaigns, in her first public address since leaving the White House, the Trump administration sought to undo her legacy on a second front as well.

According to CNN, Peace Corps director Sheila Crowley sent a memo to the agency directing staff to stop using the “Let Girls Learn” name immediately and to suspend several of the initiative's programs.

“Moving forward, we will not continue to use the ‘Let Girls Learn’ brand or maintain a stand-alone program,” the document read.

Michelle Obama rolled out the campaign in 2015 to help young girls in developing nations gain access to education. The Peace Corps and the U.S. Agency for International Development (USAID) primarily ran the female-focused education initiative. The program website states that “Let Girls Learn” was launched “to change the perception of the value of girls at the individual, community and institutional levels; foster an enabling environment for adolescent girls’ education; and engage and equip girls to make life decisions and important contributions to society.”

In an op-ed for CNN last year, Michelle Obama wrote that she decided to create the initiative after meeting Malala Yousafzai, a Pakistani girl who survived being shot by the Taliban on her school bus. “For me, education has never been simply a policy issue — it’s personal,” she wrote.

In its two years of existence, the program raised more than $1 billion to promote girls’ education in developing countries around the world. Tina Tchen, Michelle Obama's chief of staff while she was first lady, said it was "unfortunate" to see the end of the branded campaign.

Trump and his daughter and adviser Ivanka Trump have spoken about their own efforts to educate girls during the past few months, repeatedly touting the importance of seeing more girls and women pursue careers in STEM fields. The current first daughter even shared a post to Instagram on Monday in which she said she would donate proceeds from her upcoming book to help support STEM education for girls and disadvantaged youth through the Boys & Girls Clubs of America.

Women make up half of the college-educated workforce—but less than one-third of the science and engineering workforce. I’m proudly supporting Boys & Girls Clubs of America with a grant I’ve recommended from my donor advised fund, using proceeds from my #WomenWhoWorkBook to increase STEM programming for girls and underrepresented youth. Together, we will help ensure that our children’s generation is prepared to fill the jobs of the future and able to contribute to solving our nation’s most critical challenges. Visit WomenWhoWork.com for details. @BCGA_Clubs #WomenInSTEM