Lessons in history from Donald Trump, who has "a very good brain" and is "one of the smartest people anywhere in the world"

Frederick Douglass, Andrew Jackson and "medieval times": Our president, who is "like a smart person," knows it all 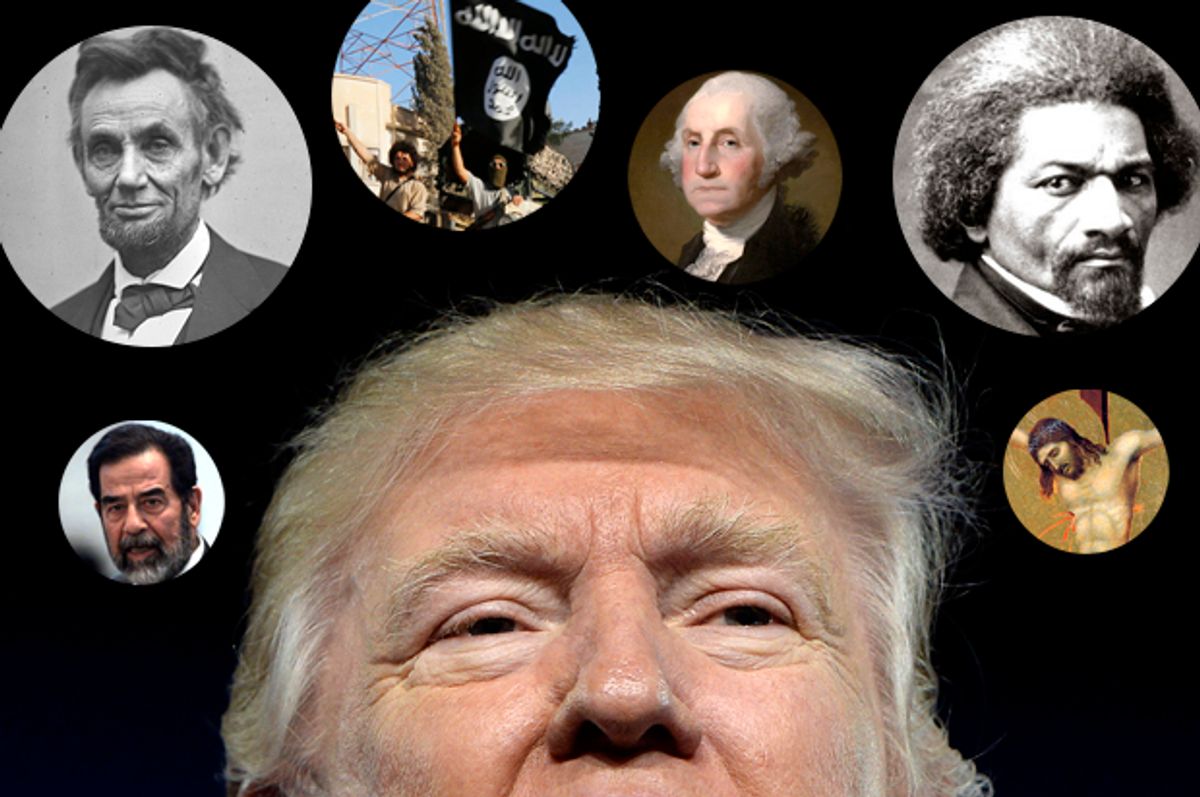 President Donald Trump said something profoundly ignorant on Monday. I know that shocks you. He is, after all, a man who has told us over and over again that he is smarter than just about anyone you'd want to mention. He has said:

"I think nobody knows more about taxes than I do, maybe in the history of the world."

When asked why he refuses to take the daily intelligence briefing, he explained it the following way:

He has also said:

"Nobody knows more about trade than me."

"Nobody in the history of this country has ever known so much about infrastructure as Donald Trump."

Regarding the legality of his travel ban, he opined:

I was a good student. I understand things. I comprehend very well, better than I think almost anybody.

Plus he has said:

"There's nobody bigger or better at the military than I am."

"I know more about ISIS than the generals do. Believe me."

At the CIA headquarters right after the inauguration, Trump said: "Trust me, I’m, like, a smart person."

Other statements: "There is nobody who understands the horror of nuclear more than me."

On whom he consults on foreign affairs, he said:

I’m speaking with myself, number one, because I have a very good brain and I’ve said a lot of things. . . . My primary consultant is myself, and I have, you know, I have a good instinct for this stuff.

It's all in the genes, according to Trump:

My uncle was a great professor and scientist and engineer, Dr. John Trump at MIT; good genes, very good genes, OK, very smart, the Wharton School of Finance, very good, very smart — you know, if you’re a conservative Republican, if I were a liberal, if, like, OK, if I ran as a liberal Democrat, they would say I’m one of the smartest people anywhere in the world — it’s true!

That's just a small sampling of the times that Trump has asserted he is gifted with vast knowledge and a prodigious intellect that far outstrips anyone else in the entire world, perhaps anyone else who has ever lived. And apparently millions of people have believed him, likely because he has a lot of money. Apparently they didn't know that along with his extraordinary "genetic inheritance" came an extraordinary financial bequest. (Trump literally believes in eugenics, often comparing himself and his family to Thoroughbred racehorses with superior breeding.)

So it's odd that a man of such unequaled intelligence would say, for instance, "Frederick Douglass is an example of somebody who’s done an amazing job and is getting recognized more and more, I notice." Perhaps he had momentarily forgotten that Frederick Douglass is one of the most famous figures in American history, studied by every child in every school, and that he's been dead for more than a century.

His comments about Andrew Jackson this week seem equally strange for a man of such erudition. He told reporter Salena Zito of the Washington Examiner:

I mean, had Andrew Jackson been a little later you wouldn't have had the Civil War. He was a very tough person, but he had a big heart. He was really angry that he saw what was happening with regard to the Civil War. He said, "There's no reason for this." People don't realize you know, the Civil War, if you think about it, why? People don't ask that question, but why was there the Civil War? Why could that one not have been worked out?

Salon's Bob Cesca unpacked this whole ignorant comment so I don't have to.

Suffice it to say that we know Steve Bannon gave Trump a book about Jackson, and the most generous possible reading of his comment is that he didn't get past the chapter on the nullification crisis and confused it with the beginning of the Civil War. It actually happened nearly 30 years earlier, and there were indeed many attempts to "work it out" over the decades, as all of us who studied the subject in the eighth grade already know. For all his self-professed genius, it seems that our president doesn't know much about American history.

During the campaign, Trump frequently said he studied a particular historical period that had left a strong effect on him, and shared the following on ABC News' "The Week":

Donald Trump: We are living in a time that's as evil as any time that there has ever been. You know, when I was a young man, I studied medieval times. That's what they did, they chopped off heads.  That's what we have. . . .

George Stephanopoulos: So we're going to chop off heads?

Trump: We're going to do things beyond waterboarding perhaps, if that happens to come.

Of course he erred in that regard, too, insisting that nobody had "chopped off heads" between medieval times and the rise of ISIS. Apparently he does not know about the beheading spree of the French Revolution, to mention just one example.

Trump compulsively watches hours and hours of cable news, so he says he doesn't have time to read books — or briefing reports, for that matter. He claims he doesn't need to, because he reaches the right decisions “with very little knowledge other than the knowledge I already had, plus the words ‘common sense,’ because I have a lot of common sense and I have a lot of business ability.”

Trump's defenders on television insist that it's unfair to criticize him for his imprecise language and confused rendering of history, that everyone is holding him to an impossible standard. But Donald Trump is the one who set this standard for himself by bragging endlessly that he is smarter than everyone in the world and has no need for facts or information because he inherently knows the right answer. When he proves otherwise, as he does nearly every day, he only has himself to blame should people point out that he has said something that reveals his immense ignorance and embarrasses our nation once again.