The next 100 days will be even worse: Right-wing bigots urge Trump to sign anti-LGBT order allowing broad discrimination

Conservatives have been pressuring Trump to take even more action targeting the LGBT community for months. 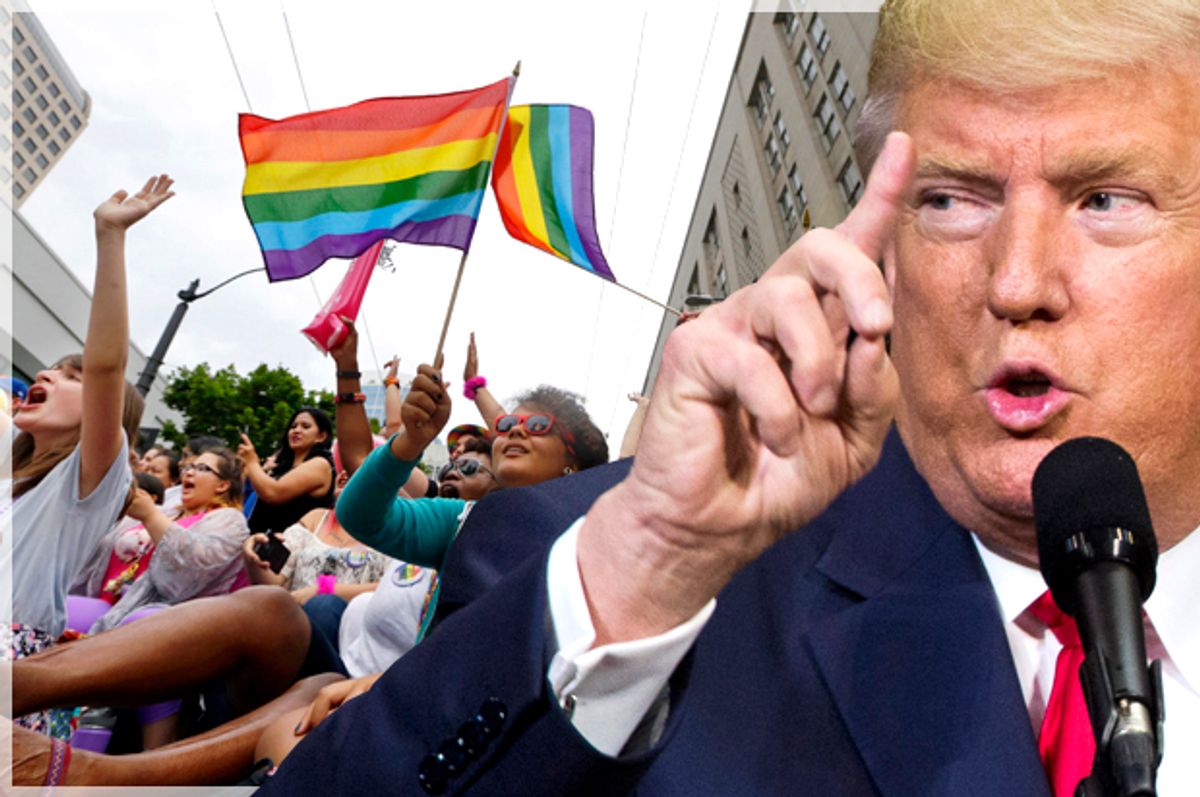 Donald Trump is expected to sign an executive order on Thursday that would allow businesses and individuals to discriminate against LGBT people following months of pressure from right-wing groups.

Politico reports that Trump plans to sign the document after scuttling an earlier version of it in February. A leaked draft of the original order published in The Nation indicated that the EO would have sweeping and disastrous impacts on the LGBT community. The four-page document allowed broad exemptions for “any organization, including closely held for-profit corporations” who have a religious objection to same-sex marriages or the gender identity of transgender people. These exemptions apply to social service agencies, healthcare providers, institutions of higher learning, employers, and even the federal government, which amounts to just about every sector of public life.

LGBT people, for lack of a better word, would be screwed. This order, if it were to be signed, would allow employers to fire workers on the basis of their sexual orientation or gender identity, permit doctors to deny life-saving services to trans people, and enable landlords to refuse housing to same-sex couples. It would realize the worst fears of the LGBT community by relegating us to second-class citizens.

Although Trump’s first 100 days in office earned a failing grade from just about every major LGBT advocacy group, news that the POTUS would not sign the EO is one of his few actions to be championed by LGBT groups. Polls indicate that the vast majority of Americans were in agreement. A 2015 survey from the Public Religion Research Institute found that 70 percent of respondents believed it should be illegal to fire someone on the basis of their LGBT identity, which is currently permissible in 28 states.

Although the new order has yet to be finalized, Politico claimed that “lawyers are currently reviewing and fine-tuning the draft language,” likely to ensure that the EO isn’t blocked like Trump’s previous orders on immigration and sanctuary cities.

The alleged order, which is timed to coincide with National Prayer Day, is the result of a right-wing lobby that doesn’t feel Trump has done enough to target the LGBT community, even though he has consistently rolled back protections for queer and trans people since taking office in January.

Peter LaBarbera, the president of Americans for Truth about Homosexuality (AFTAH), gave Trump a C+ on anti-gay bigotry. In a post for the right-wing blog LifeSite, LaBarbera said that the POTUS has a “mixed record” on LGBT issues. The right-wing activist criticized Trump’s lukewarm defense of Obergefell v. Hodges, the Supreme Court ruling legalizing same-sex marriage across the United States. Although Trump campaigned on repealing the 2015 decision, he flip-flopped on the issue after the election, calling marriage equality “settled law.” This is despite the fact that Trump tapped Judge Neil Gorsuch, a conservative jurist with a noted anti-LGBT track record, to fill Antonin Scalia’s spot on the Supreme Court.

LaBarbera also pointed to the appointment of Rick Grenell, an openly gay Republican, as the U.S. Ambassador to NATO and Betsy DeVos as Secretary of Education. He claims that DeVos is an advocate for the “homosexual and transgender agendas,” even though her family has donated millions to anti-LGBT causes. Under DeVos’ watch, the Department of Education repealed 2016 guidance from the Obama administration that urged K-12 schools to treat trans students in accordance with their gender identity.

Even though Trump has neutered nondiscrimination protections for LGBT federal contractors by nixing government enforcement of those laws, anti-gay activists aren’t satisfied. They want more, and they will probably get it.

In April, 52 House Republicans wrote a letter to the president urging him to reconsider passing the February order, which they believe is crucial to protect the conscience of people of faith. Rep. Warren Davidson, who authored the letter, claimed that the protections hinted at in the anti-LGBT EO “should be enshrined permanently into our law.” The document, which was also backed by Reps. Jim Jordan and Mark Meadows, argued the order is necessary to “provide a shield from federal assaults on religious freedom.”

The revamped order, which would allow for Kim Davis-style discrimination across the U.S., has reportedly been in the works for months. Anti-LGBT activist Ken Blackwell, who served on Trump’s transition team, told The Huffington Post in February that the order was absolutely still on the table. Even despite the urging of Ivanka Trump and Jared Kushner to kill the EO, it was in no way dead.

“In the final analysis, what we want is an executive order that will meet the scrutiny of the judicial process,” said Blackwell, who is a member of the right-wing Family Research Council.

The executive order, if signed, would be the ultimate confirmation that despite Trump’s claims that he would be a “friend” to LGBT people, the president is no ally to the community. Since taking office, he has appointed several Cabinet members with extreme anti-LGBT views, including Sen. Jeff Sessions and former Johns Hopkins neurosurgeon Ben Carson. Trump has failed to speak out about the persecution of gay men in Chechnya, even as he takes military action against human rights abuses in Syria. And he has vowed to sign the First Amendment Defense Act (FADA), a bill nearly identical to the anti-LGBT EO.

Trump’s first three months in office have been very bad for LGBT people, but after Thursday, the next 100 days could be so much worse.