Sure torturing the facts is grotesque, as is a flagrant disregard for truth, but neither is as bad as that smile 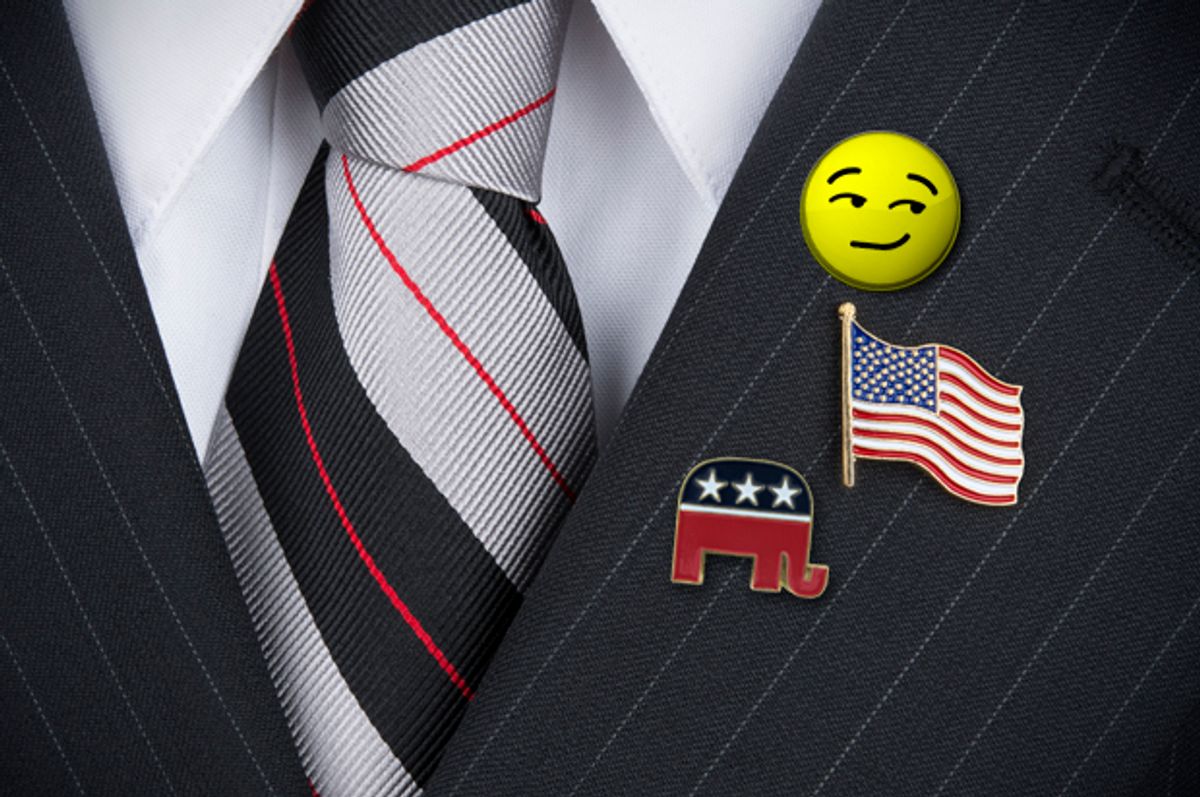 It was 2009 and we had just moved to Franklin, Tennessee, a quaint little town just south of Nashville, which was in the process of becoming a hub of techno and health businesses, and the election had recently ended and Barack Obama had been inaugurated president. We were getting to know the neighborhood and one evening the people who lived right next door invited us over for drinks and hors d’oeuvres.

They were a middle-aged couple who lived in a nice house on a large piece of property, drove nice cars, and enjoyed a comfortable lifestyle in an area surrounded with pastoral Tennessee beauty — farmland planted with soybeans and corn, horse farms with fenced fields of grass replete with riding rings and very expensive polo ponies, homes that ranged from famous 19th-century mansions to modern McMansions built by country music singers and tech millionaires.

They knew I was a writer and that we had moved there from L.A. where I had spent 15 years in the movie business. The roads were crowded with nice cars — Mercedes and BMWs and Cadillac Escalades — with McCain bumper stickers and new ones expressing sentiments like “He may be your president, but he’s not mine.” Ours was not among them.

My wife had told me they were Republicans — hell, that wasn’t a surprise, everyone in Williamson County was — and we had agreed to avoid “political” topics in favor of keeping the neighborhood waters if not exactly smooth, at least relatively unperturbed. Wine was poured, cheese and crackers were eaten and everything was just fine until the host started talking to me about books. He knew I had written novels, and he asked me if I was a fan of Michael Crichton and if I had read one of his recent books, “State of Fear.” I had to admit that I hadn’t.

A strange little smile appeared on his face, and he began telling me all about Crichton. He had read all of Crichton’s books and this was his favorite. With that strange little smile plastered on his face, he began describing the plot. It seems that in advance of a big conference on climate change, a group of ecoterrorists is manufacturing fake “natural disasters” to convince everyone of the catastrophe of global warming. These individuals are indifferent to people being killed by their fake “disasters” and are assassinating anyone who opposes them. Crichton knows what he’s talking about. He shows the whole global warming thing is a hoax because there are footnotes and appendices. Crichton graduated from Harvard Phi Beta Kappa with a degree in biological anthropology! There’s nothing this guy isn’t an expert in!

The neighbor's story of the plot is going on and on. The ecoterrorists are getting more and more corrupt, killing more and more people. The hero has to stop the killing, but mostly he has to save the world from believing in this fake catastrophe of global warming. There’s a final showdown on the Solomon Islands when the hero and his love interest brilliantly stop the ecoterrorists from creating a gigantic tsunami that will engulf the coast of California right at the time of the climate conference. A bad-guy environmentalist stand-in for liberal activist actor Ted Danson is eaten by cannibals, and the ecoterrorists are drowned by their own tsunami and global warming is shown to be a lie. In short, the sick, corrupt liberals get what’s coming to them in the most ironic way possible.

My host is sitting there with the strange little smile on his face waiting for my reaction. I knew he was trying to make a big allegorical point about how the election had been stolen by these corrupt Democrats who would tell any lie, pull any illegal maneuver to get their fake intellectual candidate elected. I had lived in the South for years in the 1980s. I had gotten in my share of political arguments with conservative Republicans, and I had seen racism cloaked in coats of many strange colors. But I had never seen the weird smile this guy had on his face. I knew we were facing years and years of obstruction and denial about Obama's becoming our president. What I didn’t know was that in that guy’s strange little smile, I was seeing the future.

I’ve started calling it the joker’s smile. This week, we’re seeing it again and again plastered on the faces of the members of the so-called House Freedom Caucus as they stand in the Capitol in front of a marble bannister with the great columns of some rotunda in the background telling lie after lie about the new version of the Republican health care bill. The big contention is over pre-existing conditions.

The Republicans' bill makes covering them optional, leaving the option up to the states, but they want everyone to believe that the bill keeps coverage of pre-existing conditions, that they’re not reversing the way Obamacare provided coverage. They’re lying, and they lie with that weird little smile plastered on their faces. Have you watched Jim Jordan, from Ohio? Or the Freedom Caucus' chairman, Mark Meadows? They are masters of the fuck-you political smile. They stand there in the Capitol lying through their exposed teeth, and they know they’re lying. They know that the reporter sticking the mic in their face knows they’re lying. And they know they won’t be called on it outright, and that thought delights them and makes them smile.

Perhaps they are. The method and the language used by the media in reporting on mendacity of this magnitude isn’t adequate to tell the story of how disgusting, bizarre and utterly unacceptable this kind of lying is. Leaving aside everything else and taking just the health care lies for the moment: You can choose to cover pre-existing conditions or you can choose to make covering them optional and this will leave some people in the lurch. You can’t do both, yet they act daily like doing both is as easy as saying it’s so.

It’s as if words have no meaning. Convictions don’t count. Principles don’t count. It isn’t a matter of left and right. It’s not Democrat and Republican. It’s not even right and wrong, light and dark. It’s a matter of what is real, and what isn’t. Increasingly, we are living not just in two Americas, but in two realities. Take a look at last weekend. The two realities were on full display. Instead of attending the White House Correspondents' Dinner, like every president has for decades, Trump gets on the Big Jet and flies all the way to Harrisburg, Pennsylvania, for a big rally where he gives a completely unhinged address to an auditorium that wasn't even completely filled with his adoring base. Starting off with about 15 minutes of attacking the press and making fun of Democrats and celebrating his Big Victory last November, he went straight into his old stump speech — the wall! the immigrants! ISIS! repealing Obamacare! — to rapturous applause, complete with throwing someone out of the rally and celebrating the incident.

Then an interview that Trump had given a few days before ran on one of the Sunday shows and showed that not only has he given up on every single promise he made about health care during the campaign; he also doesn't have even a teeny clue about what's in the Republican bill to replace it. In other words, two more days of bragging, bluster, lies and mendacity. He may be at only 40-plus in the polls, but something like 96 percent of his voters are pleased as punch with the reality that they’re living in.

In the other reality — well, it's hardly necessary to describe it. Large demonstrations in multiple cities against Trump's disassembly of the Environmental Protection Agency. Actual journalists not in the company of platoons of B- and C-list celebrities gathering for an actual correspondents' dinner addressing actual threats to the First Amendment. A few Democratic talking heads on Sunday trying to point out the obvious bullshit about the so-called Republican health care bill.

It's becoming increasingly obvious that you can live in one of the two realities but not in both. You're either in Trump's 40 percent, blissfully supportive of his fumbling bumbling toy presidency, or you're in the other reality. The problem with members of the media is their trying to live in both. They think they have to cover Trump like he is an actual president, existing in an actual reality, when he's not even a figurehead; he's a bobblehead. The words coming from his mouth are not even remotely attached to anything real. That he tells multiple lies every single day is almost beside the point. To him, to his 40 percent, his lies are real.

There will be consequences to the decisions we make as well. There will be winners and losers. Those who embrace this separate reality that is unmoored from science and reason and morals will lose jobs, lose their health, lose their children and loved ones because people will die. There just has to be a way to wipe the joker’s smile off these assholes’ faces because people dying isn’t funny.