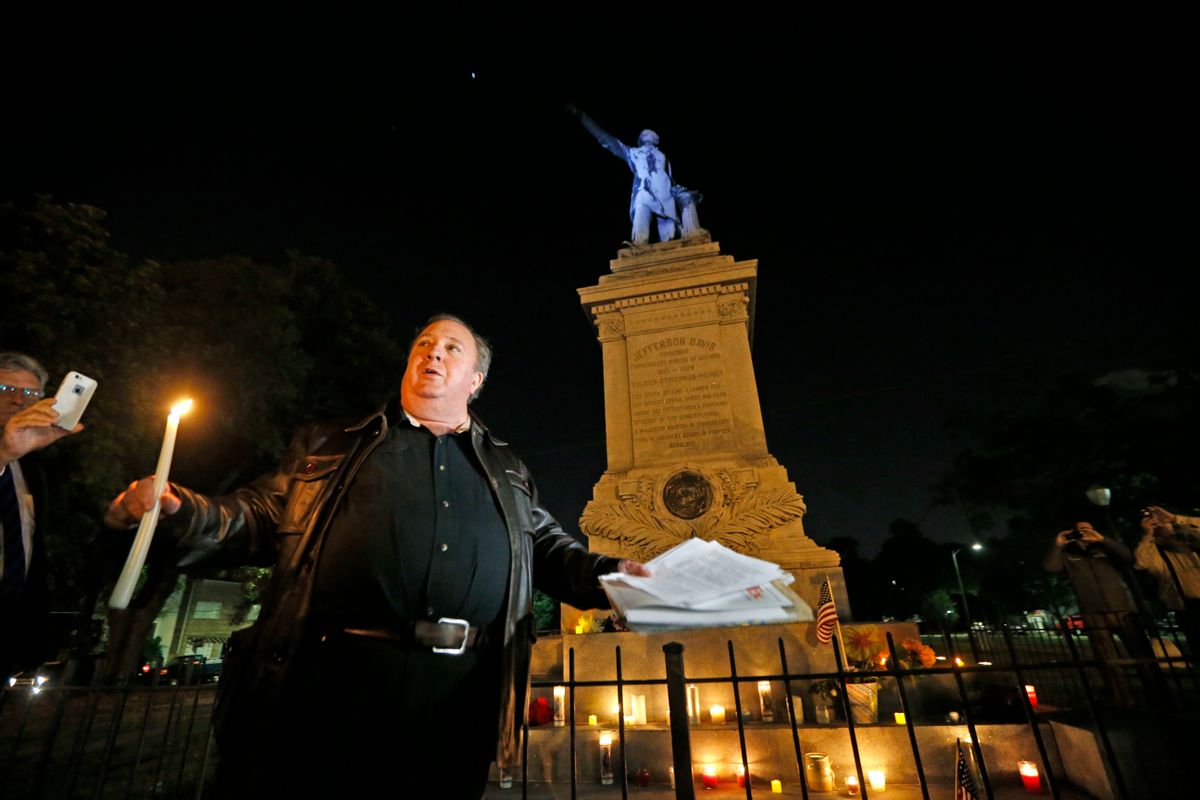 The first statue, which honored an 1874 white supremacist rebellion against federal authority after the Civil War, was removed in the middle of the night by masked contractors wearing bulletproof vests in late April. None of the other three have been relocated yet.

Landrieu has said he plans to place the statues in a museum at a future date but has not given details on their ultimate destination.

The removal effort has provoked a massive amount of controversy within far right circles. Several Republican politicians have condemned the undertaking, one even accused Landrieu and other supporters of removing Confederate symbols of conducting a "war on our history."

In an interview with the local Times-Picayune newspaper on April 27, the Democratic mayor said that city officials have received numerous death threats and that every company offering heavy crane rentals in southern Louisiana has received threatening messages as well.

"It's not the monuments. It's the attitude that allows the monuments to stay," Landrieu was quoted as saying.

According to Landrieu, several prominent local business leaders have privately pressured him to halt his efforts. He's also come under fire from a number of Republicans in the state legislature who have been promoting several different bills designed to keep the Confederate monuments in place.

Thomas Carmody Jr., a Shreveport Republican member of the state house, introduced a bill which would make all municipal efforts to remove, rename, or alter any military monument subject to a vote of the local citizens. It successfully passed through a committee vote on Wednesday, according to the The Advocate newspaper.

The monument removal initiative has also attracted the attention of web-based political extremists on both left and right, particularly as the city is in the midst of one of its top tourist events, the annual Jazz Fest music extravaganza.

Pro-monument protesters have repeatedly gathered at a statue honoring Jefferson Davis, the only president of the Confederacy, and have clashed with those supporting the relocation effort. Several members of an "antifa" leftist organization have been filmed by observers in a military truck bearing a sign saying "Fuck Off Nazi Scum!"

Supporters of the statue have also been rallying at the state capitol in Baton Rouge and have accused their opponents of throwing filled soda cans at them.

Antifa activists have also been accused of spraying graffiti on another of the statues and also painting "tear it down" on a monument to Joan of Arc, a figure from French history who had no connection to the Confederacy.

The controversy has also gotten the attention of the racist "alt-right" movement as part of a larger strategy to utilize violent confrontations with antifa demonstrators to radicalize white Republicans.

Kyle Chapman, a far-right Trump supporter who acquired the nickname "Based Stick Man" after an altercation with antifa activists in California earlier this year, has issued a call on Twitter for his fans to join him at a rally in New Orleans on May 7 to "defend American history." Numerous other alt-right blogs and Twitter users have been promoting the event to their followers as well.