A year ago, Trump's "I love Hispanics" tweet was funny. Now, not so much 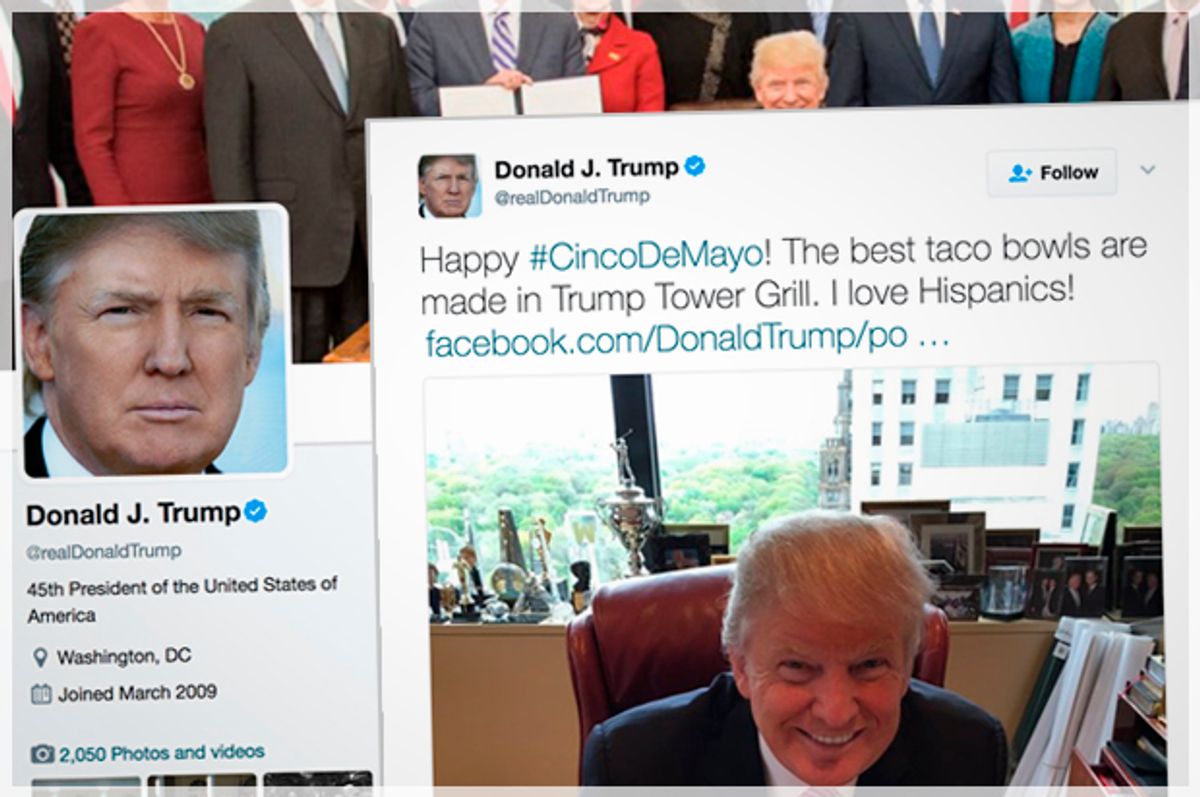 A year ago, a Republican candidate vying for the party's nomination to be president celebrated Cinco de Mayo — the Mexican Army's victory over France in an 1862 battle — by promoting the only good dish available from the terrible Trump Grill located in an office building he owned.

That was Donald Trump, who would be elected president six months and three days later.

At the time, that was funny. After all, here's a tweet of someone who proclaimed to be a genius, smiling vacantly while hovering over fried dough filled with sour cream and various fillings while proclaiming, "I love Hispanics!" It reminded me of a former classmate of mine who screamed, "I love multiculturalism" while downing cheap sake bombs in a Korean barbecue restaurant in Chinatown.

But it's been a year, and now Trump has significantly altered Cinco de Mayo. By ramping up the rhetoric against immigrants and minorities, he's made it so that Mexicans are actually afraid to celebrate a holiday previously viewed as a "reason to eat tacos and listen to Mexican music," according to the Associated Press, which also noted:

Trump's immigration policies and rhetoric are leaving some Mexican Americans and immigrants feeling at odds with a holiday they already thought was appropriated by beer and liquor companies, event promoters and bars.

Latino activists and scholars say that ambivalence is bolstered by the hazy history of Cinco de Mayo and by stereotypes exploited by marketers.

This year, some immigrant enclaves have canceled or reduced Cinco de Mayo celebrations over fears that party-goers could be exposed to possible deportation. In Philadelphia, a Cinco de Mayo-related celebration was scrapped after organizers determined turnout would drop over concerns about immigration raids.

Others worry that parties could take a cruel spin, with revelers, emboldened by Trump's crackdown, mocking and even attacking Mexicans. In Waco, Texas, a college fraternity at Baylor University was suspended after throwing a Cinco de Mayo party where students reportedly dressed as construction workers and maids and chanted "Build that Wall," a reference to Trump's signature campaign promise. The party sparked an investigation and campus protest.

Or you can buy a Donald Trump piñata this year.