Barack Obama endorses Emmanuel Macron — but don't kid yourself, the French ex-banker is no progressive

It's crucial to defeat Marine Le Pen and halt the rise of fascism. But Macron's policies have already failed 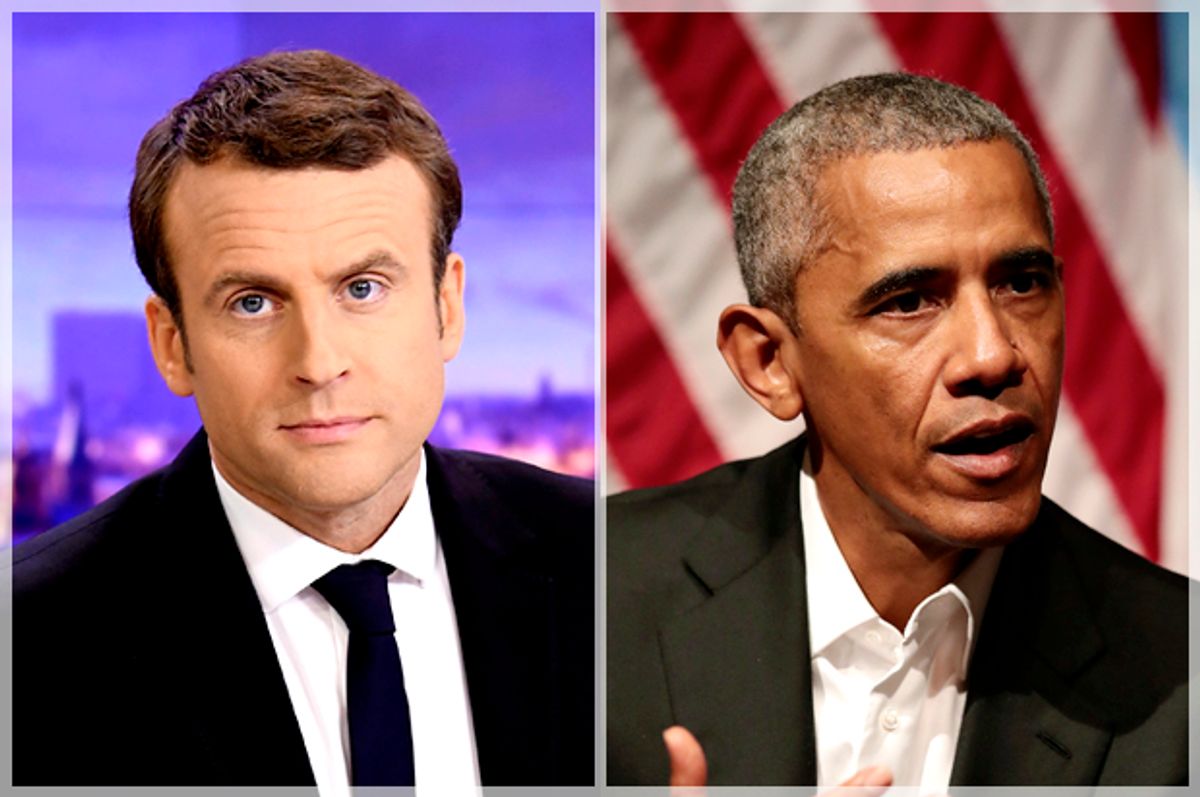 “I’m not planning to get involved in many elections now that I don’t have to run for office again,” said Obama in a video statement. “But the French election is very important to the future of France and the values that we care so much about,” he added.

“The success of France matters to the entire world,” continued the 44th U.S. president, who commended Macron, a former investment banker who espouses socially liberal values and center-right economic views, for standing up for “liberal values” and putting forward a “vision for the important role that France plays in Europe and around the world.”

Obama’s decision to publicly support Macron and focus on the importance of liberal values and the European project in his endorsement clearly shows what is at stake in the French election. Le Pen embodies the rise of far-right populism in Europe and around the world, and over the past decade she has done a tremendous job of mainstreaming xenophobia and nativism in France. Along with other right-wing populists like Donald Trump, Nigel Farage in the U.K. and Geert Wilders in the Netherlands, Le Pen represents a major threat to liberal democracy in the West. Although the far right has been dealt a few electoral blows recently — most notably in the Netherlands, where Wilders’ Party for Freedom underperformed in the March election — it is still very much in the ascendant.

Throughout his presidency, Obama was considered by many admirers to be the leading defender of Western liberal values in a world that is becoming increasingly illiberal and authoritarian. After he was succeeded by Trump earlier this year, the liberal intelligentsia has pretty much passed the baton to Germany’s center-right chancellor, Angela Merkel. Now the youthful Macron has become an important figurehead for the neoliberal establishment, the latest guardian of liberalism in a region that is becoming more and more susceptible to darker political currents.

Make no mistake about it: Macron will defeat Le Pen to become the next president of France — which is the best thing that can happen at this point. But Macron's meteoric rise shouldn’t fool anyone. He may look like liberalism’s latest knight in shining armor, but in the long run his election does not bode well for the future well-being of liberal democracy.

Though Macron has been hyped by the media as a political outsider, he is a creature of the establishment if there ever was one, and is the natural successor of President François Hollande, whose neoliberal economic and fiscal policies have earned him historically low approval ratings. Macron made his fortune as an investment banker for Rothschild; he served as the Hollande government’s economy minister for several years, ushering in a number of business-friendly reforms. He was prudent, however, to distance himself from the Socialist Party, which has become a toxic brand because of the Hollande government. Thus, while Macron was the candidate whose politics and policies were closest to Hollande’s, the Socialist Party’s left-wing candidate, Benoît Hamon — who represented a departure from the party establishment’s centrism — bore the brunt of the political fallout.

We can expect the handsome and boyish Macron to continue with more of the same over the next five years — which is, of course, what Marine Le Pen and the National Front are counting on. Though Le Pen has become an increasingly formidable political figure in recent years and has transformed the National Front into a more accessible and more mainstream party — at least compared with what it was when her overtly pro-fascist father, Jean-Marie Le Pen, was at its helm — it is still too toxic for it win a majority of the French vote. Polls currently suggest that Macron will win the final round this weekend with more than 60 percent of the vote. But if five more years of the status quo transpire under Macron, a Le Pen victory will seem increasingly possible.

While the French election has obviously shaped up to be almost as depressing as last year’s U.S. presidential election, there is some reason to be cautiously optimistic. As with the political rise of Bernie Sanders in America, the French election witnessed the ascent of left-wing populist Jean-Luc Mélenchon, who garnered almost 20 percent of the vote in the first round. (When Mélenchon's tally is combined with that of the Socialist Party’s Hamon, left-wing populists received more of the French vote in the first round than either of the two finalists.) Far-right populists, then, aren’t the only ones revolting against the status quo, and the left could potentially forge a new path forward by offering a progressive agenda that extends beyond neoliberalism.

The post-neoliberal world does not have to be illiberal or authoritarian. It is the left's task to fight to make sure that “liberal values” are protected while at the same time confronting the historic levels of inequality, the threat of climate change, environmental degradation and automation-induced mass unemployment,, and other dangers that our economic and political system has engendered. Appeals for political and economic democracy must be employed to counter all kinds of authoritarianism and that includes both left- and right-wing forms — though right-wing authoritarianism is a much greater danger. To defend Enlightenment values (free speech, secularism and inclusiveness), a new political project is necessary — one that will safeguard the advancements of modernity but will also acknowledge the social ills and injustices it's brought  and that will promote egalitarian principles.

The future could be very bright or very dark, but there is no question that we are at a critical time in history. Emmanuel Macron is not the right politician to lead the way.