The investigative journalist warns that "voodoo economics" is coming back 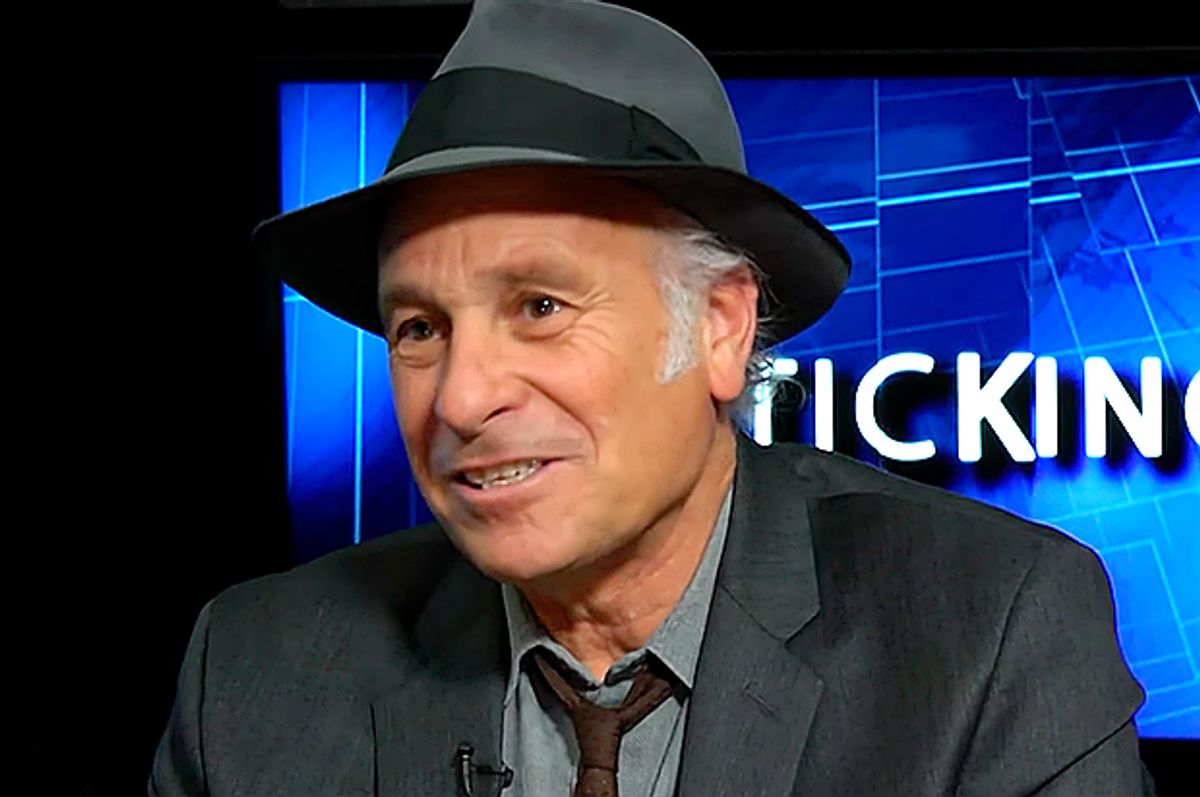 Steven Rosenfeld: It seems every bad economic idea championed by Republicans is coming back in style under the Donald Trump-Paul Ryan regime. Am I imagining that?

Greg Palast: Unfortunately, it’s not a dream. You’re wide awake. Yes, these ideas come back. As the economist John Maynard Keynes said, “Mad men in authority, who hear voices in the air, are distilling their frenzy from some academic scribbler of a few years back.”

So yes, what’s come back is voodoo economics. That is, if you cut taxes on the rich, they’ll get so excited and go into so much busy economic activity, that the economy will grow and your tax revenues will actually rise. So cut taxes, collect more taxes. It is a miracle. It is voodoo economics, as George Bush Sr. called it. It’s from the Laffer Curve. That’s Art Laffer. He was my mentor at the University of Chicago, where I studied economics under him and Milton Friedman.

GP: These were the guys who created supply-side economics. These miracles that if you cut taxes on the rich, if you take away all the rules and regulations, that there will be this frenzy of activity. We’ll have full employment. And the treasury will be bursting with tax revenue. There’s a problem with that. It works on a napkin. Famously, Art Laffer started with writing this curve (plotting tax rates versus tax revenues) on a napkin, which says that you get more revenue when you cut taxes. He put that on a napkin for me. I can’t make this up. He was a cheeseburger addict. He always had napkins and was writing on them. And it doesn’t work. It’s a con.

You can only get more revenue by reducing taxes on the rich if their taxes are somewhere above 90 percent. That’s how [President John] Kennedy got some extra tax revenue because the taxes on the rich (in the early 1960s) were at 90 percent. If you cut from 90 to 85 percent, you might induce some rich people to keep their money and invest. But right now, this is going to be a $2 trillion hole in the economy.

SR: So how do people keep making this argument with a straight face?

GP: Because it’s profitable. And the media has gone along — that Reagan was some kind of economic genius despite our massive deficits and destruction of the working class in America. That’s where it began. So there’s a profit to be made. Who owns the media? The guys who are getting these tax breaks.

And in fact, that’s one of the biggest problems. They’re deceiving us because they make money off the deception. And also long as the suckers in those red trucker hats think that these guys are making America great again won’t wake up from the spell, they’ll using the same trick. They’ll keep playing three-card monte with you while you keep thinking you know which cup has the penny in it. No you aren’t. The game’s rigged.

So, for example, Steve Mnuchin, who’s the Secretary of the Treasury, he’s the one who said that this tax cut, “will pay for itself with growth.” Now what is the number-one tax loophole that Trump insisted he would cut? He and Bernie Sanders. It’s something called carried interest. It is a loophole used only by speculators. Not even by the Kochs. Not even by anyone who hires anyone; purely by Wall Street speculators, including and particularly Steve Mnuchin, the treasury secretary, and one of Trump’s biggest donors who’s been in the shadows, J.P. John Paulson, the foreclosure king—they are the guys who literally can save billions. John Paulson personally will save at least a billion by keeping open this tax loophole. One billion dollars for one guy, Steve Mnuchin’s partner.

That’s why they keep pulling this stunt. Because it works while they collect. But so Trump didn’t [propose to] close that loophole. Instead, he made it so wide that you can now fly a 747 through it.

SR: There’s this other thing you talk about, territoriality. I thought there were multi-billions offshore waiting to come back for reinvestment and spending — like Apple profits — if only the coast was clear. What is going on here?

GP: Right now, your profits are taxed anywhere you earn them in the world when you bring them back to the U.S. or pay dividends to your U.S. stockholders, which they’ll eventually want, right? Or pay your creditors with the money. So that’s taxable.

I’ll give you a real-world example. Delphi Automotive — now that’s the company that used to be called DelCo. It was part of General Motors. The auto parts for GM cars were made in Warren, Ohio, at the Delphi plant. Some of these billionaire speculators moved the plant to Monterey, Mexico. Now, follow this, when they earned profits in Warren, Ohio, that was taxable. When they earn any profits in Monterrey, Mexico, under Trump’s new [proposed] rule, that will be forever free of taxes. So, in other words, it a massive tax subsidy to move your factory from Ohio to Mexico. And no one said a damn word about it.

This is Donald Trump. Just so you know, Donald Trump talked about moving the plant to Monterrey, Mexico, while he was in Warren, Ohio. He told the laid-off Delphi workers, "I will bring this plant back . . . When I see the closed gates and this factory, I want to make that wall deeper and higher." That’s what Trump said in Warren, Ohio, to those workers: "I’m going to bring your jobs back."

Instead, he just gave a tax break to the guys who moved the plant over. You stay in Monterrey, you get a tax break. You bring your plant back to Warren, Ohio and you’re subject to the corporate tax. Let’s put it directly. Those guys in the red trucker hats — he’s pissing in their faces. And he’s laughing about it. He’s thinking those poor schmucks don’t know, they don’t care.

And I don’t like the idea that Trump is some kind of dummy who doesn’t know what he’s doing. He isn’t. For a dummy, he keeps winning every chess game. How does that happen? This is deliberate. He’s letting the billionaires rewrite tax codes so you and I pay and they’re off the hook.

SR: This is what I hope people will start paying attention to, not the tweets or the stupid stuff he's saying. But the way that the people he has surrounded himself with are rewriting the rules of the road, in all these different areas, whether environment or taxes or the courts.

GP: Let’s put it this way. The liberalati press has decided that Trump didn’t get anything done in 100 days. Boy, are they asleep. They’re paying attention to the tweets, and Miss America is too fat, and let’s bomb North Korea. Right? But behind it were a massive number of executive actions and bills that they put through Congress reversing regulations all over the place.

Including, for example, on a single day, the liberals are laughing that Trumpcare ended up facedown in the swimming pool. That’s at 3pm. What there was little discussion of, was at 10am that same morning, Trump officially approved the Keystone XL pipeline.

GP: Now, we talk about global warming, environmental disaster. Let’s look at the other end of the pipe, okay? I didn’t see a single place in any U.S. newspaper that said, who is the beneficiary of the XL pipeline? It ain’t this company TransCanada. It’s who gets the oil at the end of that pipe. If you saw my movie, we’re running a pipe from Canada across the United States to Texas — and I understand that Texas already has a little bit of oil. Texas is choking in oil. Why the hell are we bringing a filthy pipeline with the world’s filthiest oil across the United States to Texas, where there is a glut of oil?

The answer is K-O-C-H. It’s the Koch brothers. They own the Koch Industries refinery in Corpus Christi, which is the main beneficiary of that oil coming down from Canada, because the Koch refinery cannot handle the cleaner oil that comes out of Texas — west Texas immediate, as they call it, which means the intermediate filthy.

They need heavy or super heavy oil. That can only come from only two places in quantity. Venezuela, which is still controlled by the Chavistas, which charge the Kochs through the nose, or Canada, which is willing to charge the Kochs $15 a barrel less than Chavez’s crew in Venezuela. You work out the math. That’s over a billion dollars for two men, Charles and David Koch, every year. A billion dollars for two guys and we get to eat the pipe.

SR: This is what's going on. Do you see any hopeful signs of resistance? Are the Democrats going to rubber-stamp this? Or is this all done under the guise of regulations and nobody can really stop it because there’s a Republican monopoly on federal power?

GP: It’s not a Republican monopoly. It’s a billionaire monopoly. We’ve had a billionaire coup d’etat. And the billionaires own enough Democrats that you will not see pushback on a lot of these items. You will not see pushback on carried interest because Chuck Schumer, the Senate Democratic leader from New York, is not going to hit Wall Street, which is what he represents. So I’m not sure that the Democrats, per se, are going to rise up.