I’m an American Jew. Palestinians tried to kidnap me. Then we became friends 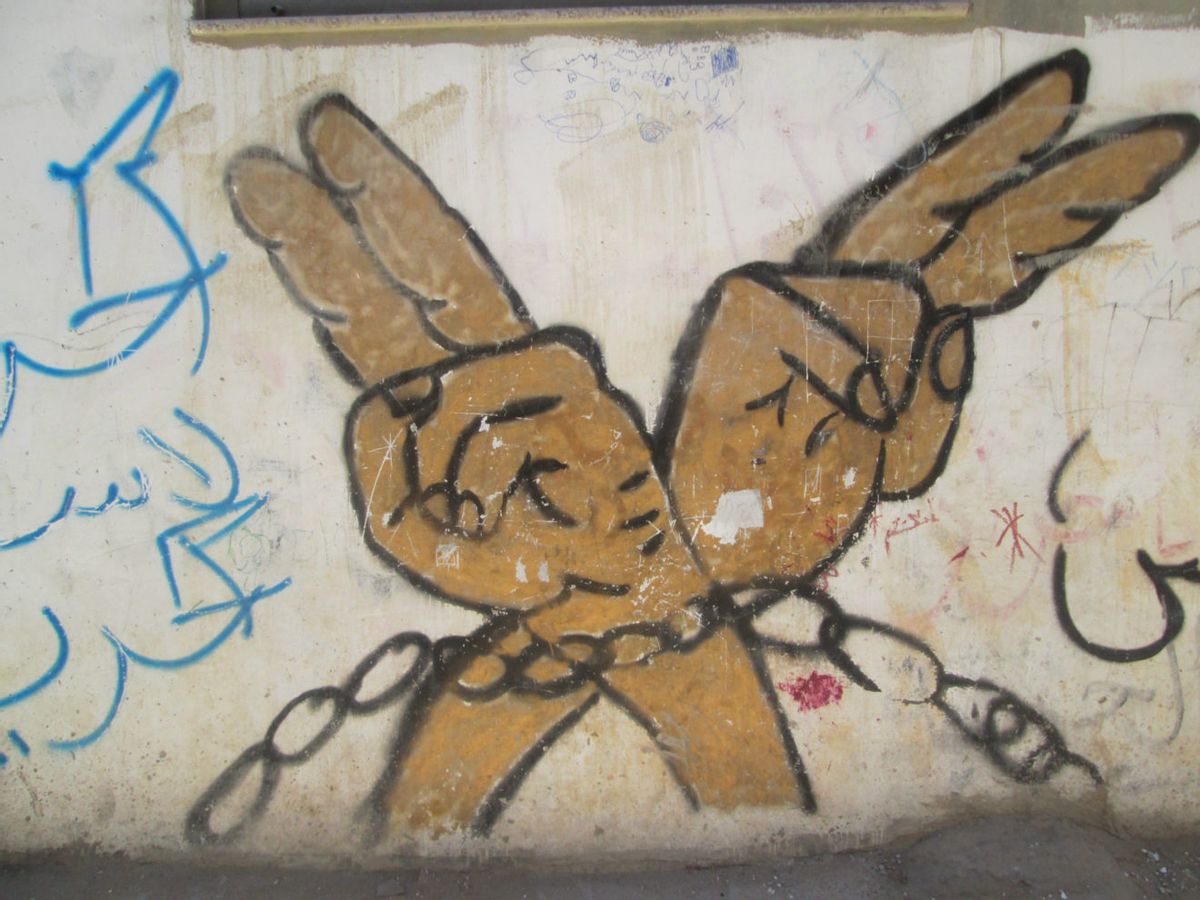 In June of 2014, Hamas operatives kidnapped three Israeli teenage settlers just outside the West Bank city of Hebron. Over the next two weeks, Israeli soldiers stormed through thousands of homes and businesses across the West Bank, and local Palestinians were barred from leaving Hebron.

A white American, I was living in the West Bank at the time, teaching English. On June 30, the boys’ bodies were found in a field near my host family’s home in Halhul, a village just outside the city, and a week later, the war in Gaza started in earnest. Each night, crowds of Palestinians clashed with Israeli Defense Forces at a checkpoint on the road from Halhul to Hebron. It was the only way I knew to get home from the city, so if I was in town when night fell, I stayed there, waiting in a café or a friend’s house until early in the morning when the fighting stopped.

On the night of July 14, I left a café in Hebron to walk home. I had a feeling that after so many nights of unrest, the road back to Halhul would be clear.

Well, I was wrong.

I reached the roundabout at Ras Al-Jorah, and I peered ahead at the most intense fighting I had yet encountered. Hundreds of young men choked the street, with many throwing rocks towards the military vehicles and their blinding lights in front of the checkpoint. Flaming tires filled the air with thick, harsh smoke. I’d already gotten used to tear gas and rubber bullets outside my home, but this night in Palestine was different. Fireworks and Molotov cocktails accompanied the stone throwers, and the soldiers’ rubber bullets were now live. The crowds were swelling. Their anger was boiling. IDF Special Forces had arrived.

Read more Narratively: Yes, New York City Does Have Trees. I’m on a Quest to See All the Best Ones.

So I, the 21 year-old Jewish boy from Long Island, wondered: Is there a way I can get around this?

There’s an apt word to describe my role in this story: dumbass.

I moved closer to the front line, squinting to see if there was an alternative route beside the bridge where the soldiers stood. While some people on the Halhul side of the checkpoint would have recognized me, here I was an unknown figure wearing a backpack and a plaid shirt courtesy of the Gap. The crowd chanted for Muhammad Abu Khdeir, a Palestinian boy who was recently murdered and mutilated in Jerusalem. Chants devolved into shouts until an Israeli sniper’s bullet zipped by, and we ran for cover. There was none of the bored standing around you usually find at the fringes of these kind of clashes. A riot was brewing.

Read more Narratively: This Photographer Captured the Struggle and Beauty of Her Sister’s Mental Illness

By my side, a man began speaking to me in Arabic, and I replied with what little I knew after completing Arabic 204. His eyes widened. “Ajnabee!” he screamed — foreigner.

Within seconds, a swarm of young men crowded around me. I tried to remain calm, but my anxiety deepened. It’s hard enough to understand one person speaking Arabic, let alone dozens of men shouting as snipers, tear gas and fire compete for your attention. I froze up. I’m sorry, Professor Houssami. I guess I deserved that A-minus.

Several teenagers shoved me into a dark alley. They sat me down and surrounded me. I feigned composure, but I knew this was some newfound variety of bad.

They demanded to see my passport and backpack. I had left my passport at my house, and my backpack carried my laptop and other valuables; I did not want these kids stealing my stuff. I insisted that I was an American living with a family in Halhul. I taught English on Ein Sarah Street! I was fasting for Ramadan! Ask my buddies over at Roma Café! I did everything I could, but they could not be swayed. They cackled like they had found a prize.

A few minutes later, a middle-aged man came, a man much older than the people you usually see at these nightly clashes. I tried to smile and act oblivious to the absurd circumstances, but he only eyed me with greater suspicion. He interrogated me further, demanding to know what I was doing there, and I told him in the best I could with my terrified, broken Arabic.

Only after the fact would I realize he was connected to a militant group.

Living among Palestinians, and seeing what their lives were like under harsh military occupation, had burned a passion within me for these people and their rights. All demonstrations in the West Bank, violent or nonviolent, are illegal. I’ve been numbed by the number of prison stories I’ve heard in cafes, in homes, and on the street. One estimate cited in Haaretz says that seventy percent of Palestinian families have had at least one relative imprisoned for actions against the ongoing Israeli occupation. When you’ve heard so many Palestinians scoff at their prison stories as “expected,” you begin to realize it’s not an exaggeration. It is life under military law. 99.7 percent of cases in an Israeli military court result in conviction.

But now, I was the one whose fate was subject to the whims of arbitrary justice.

After several minutes of further questioning, the boys dragged me back toward the main street. Maybe this is good, maybe they are letting me go, I thought. But quickly, the mob rushed around me once again, and this time, they were pushing and grabbing. My oh-everything-is-alright-as-I-silently-shit-my pants smile quickly vanished. I fought to break free, but I was a puny pacifist helplessly surrounded.

The crowd erupted as they pushed me toward an alley. The mob mentality had taken over the night, and there was no escape. My terror had turned to despair. There was nothing I could do.

But then, a tug pulled me in the right direction away from the marauding mob. A stroke of luck! As quickly as I had been ensnared, I was pulled out.

I turned to find my savior: the fourteen-year-old little brother of a Palestinian friend of mine. He assured the mob that I was friend and not foe, and we quickly fled the scene. His family later punished him for going to the clashes, though I privately disagreed with them for somewhat selfish reasons.

His brother, Anas, came and picked us up in his car.

“What the hell just happened?” I asked, and they roared with laughter.

“They were trying to kidnap you!” explained Anas, giggling at my cluelessness. My hands trembled uncontrollably and continued to do so for the rest of the night.

The crowd had thought I was a mustarab, an Israeli soldier disguised in plainclothes to ambush, shoot, and arrest Palestinians. Between my Western clothes, the backpack I refused to open, and a particularly intense round of fighting with Special Forces and an angry mob, the stars had aligned for an awful case of mistaken identity to occur. (Not to mention my sheer stupidity: Anas informed me there was in fact an alternative route to Halhul via Hasaka, which likely made my explanation for being there that night sound all the more improbable.)

The Palestinian teenagers were trying to kidnap me with the idea of pursuing a prisoner exchange. In 2006 the Israeli soldier Gilad Shalit was kidnapped by Hamas and later returned in exchange for hundreds of Palestinian prisoners. Since then, some Palestinians may see kidnapping in a chaotic moment like this one as a a fleeting chance to finally have back their own “kidnapped,” as Palestinians often call the imprisoned. The last time many see such relatives is when soldiers, without warning, storm their family’s home in the middle of the night and take their loved ones away, often in violent fashion.

Few Palestinians believe the military will ever treat their brothers, their friends, themselves properly both in and out of prison. While loved ones dwell in substandard conditions in Israeli military prisons, those remaining can become desperate to make their fractured families whole again.

In all my time spent in the West Bank, this was the only time when I felt truly threatened by Palestinians, and it was a result of this system of military law.

In the days after, I walked into the city and noticed the teenage boys who first dragged me into that alley at a carwash where they worked. They waved and beckoned for me to come say hi. I gave them a dirty look and continued walking on the other side of the street, unable to shake off what happened that night.

A week or so passed, however, and they soon ensnared me once again on three sides. I took a step back, but I found my fears quickly abating. They were busy tittering and messing with one another as boys their age typically do. The boys were all talking over one another until the smallest among them bellowed, “I am the Undertaker!” and promptly body-slammed one of his friends. They certainly were some little shits — don’t get me wrong — but in the sense that the only English phrases these kids knew were courtesy of WWE SmackDown.

After a couple minutes, they moved on to the tough topics. “Professional wrestling,” asked the Undertaker in Arabic, “it’s real — right?”

I laughed; he wasn’t the first Palestinian to ask me that. “No,” I replied, “it’s all fake.” They erupted in protest. “Don’t tell me that!” one kid begged. “That blood you see is real!” another exclaimed. Surveying their downbeat faces, I realized I had just revealed that Santa Claus was a farce.

Whenever I’d see them in the following weeks, the boys would jokingly ask how my shift at the military checkpoint was. A few invited me over for dinner. As time passed, I learned that each one of them had fathers, brothers, cousins who were in prison. Amidst the insanity of the mob that night, in the eyes of the angry, the distressed, I was their ticket to seeing their imprisoned relatives once again.

Before this experience, I had spent the previous weeks grappling with support among some Palestinians for the recent kidnapping of the Israeli settlers. These boys helped me understand what my insulated, Western ideals had failed to comprehend. Desperation brings out the ugly side of humanity — the suspicious, the cold, the carnivorous part of us that manifests when snipers’ bullets are in the air. In a world governed by injustice, these kids had simply reciprocated the treatment they’d always received. In the moment, it seemed like nothing else would get back their loved ones or at least avenge them. The desperate just might grasp at any hope they can find — no matter how gilded it may be.