The human cost of "playing god" 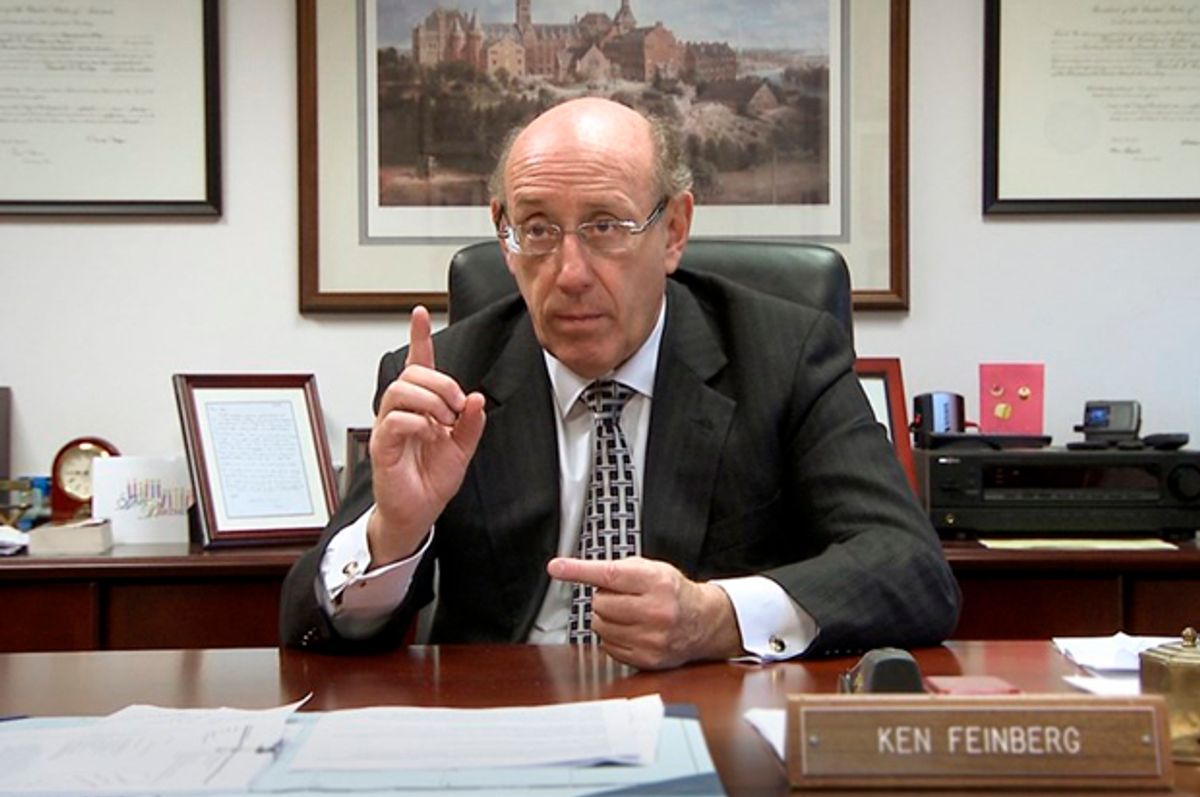 Many of the worst mass calamities — September 11, the Vietnam War, the BP oil disaster — have had one consistent presence: Ken Feinberg.

When it comes to compensating the victims of large-scale errors and disasters — say, those of  General Motors’ faulty ignition switches or those of the military's use of Agent Orange — he's the lawyer and "special master" often called upon to adjudicate eventual, massive out-of-court settlements. As evidenced in the new documentary, "Playing God," it isn’t a pretty business.

One victim may call Feinberg “a man of courage.” Another may call his settlements “blood money.” In the end, putting a value on mass suffering is no-win task. For "Playing God" director Karin Jurschick, however, this dirty work became an opportunity — one that allowed her delve deep into moral issues and piece together what she calls a “picture of America.”

Recently Salon sat down with Feinberg and Jurschick in Toronto at the film's Hot Docs Festival premiere to discuss her movie and his work.

Karin Jurschick: My producer used Ken briefly in a previous documentary and said, “Don’t you think there may be a story with this man?” I thought that it would be a way to get into a larger story.

Ken Feinberg: I agreed to do it, but I was dubious because I’ve had various inquiries over the years. I was curious whether it would get off the ground. The topic is a little esoteric. I thought it was an excellent idea because I think it’s educational. People should have some understanding of under what circumstances and how you go about compensating some victims of tragedy. I thought that would be a useful dialogue.

How important was it to tell your personal story?

Feinberg: That was a tension where the director and the producer wanted as much of the person behind the program and I do, to a certain extent, understand that but I wanted to guard my privacy. I think they did a good job balancing the two sides. But I haven’t seen it yet. I tell anybody who is interested in what I do; “Brace yourself. Brace yourself for what you are going to hear: anger, frustration, disappointment.” How many people can actually sit with victims and not lose their minds?

So what is it about you? How do you do it?

Feinberg: You have to be very devoted to the public interest. Much of what I do, like 9/11 or the Boston Marathon, is pro bono. Much of this is an obligation to the community.

Karin, did you want to dig into the personal side?

Jurschick: I was more interested in the wider picture, the system behind him. For me, it was a chance to make a picture of America and this question of what a life is worth in this country. And Ken binds this very well. What he is doing is far more interesting than . . . if he plays cello or whatever.

Feinberg: I calculate the value of life the same way that judges and juries do it in every court and in every city. It’s a cold mathematical formula: What would a person earn in their work life if not for the tragedy. So the stockbroker, the banker, the lawyer — more money than the busboy, the waiter, the cop and the fireman. That’ s income inequality right there. But that’s the system. And then you add to that pain and suffering: Emotional distress visited on the survivors added to the economic loss. There’s your reward.

What value can you put on pain and suffering?

Feinberg: I am not about to calibrate varying degrees of suffering. Everybody suffers. So I get from the Bureau of Labor Statistics the average pain and suffering jury verdict in the U.S. Back in 9/11, it was something like $250,000. We added a standardized pain and suffering amount for the death of the victim. And one hundred thousand for every surviving spouse and every child. There’s the formula. With General Motors, the ignition switch; this was 12 or 13 years later. It was $700,000 for pain and suffering plus $300,000 for the spouse and children.

Feinberg: The 9/11 fund didn’t cap the money. Congress didn’t allocate a certain amount of money. Congress said, “We don’t know how much this is going to cost. Whatever it costs is in your judgment. We’ll take it out of petty cash in the U.S. Treasury.”  My calculations amounted to $7.1 billion for 9/11; $600 million, open ended, for General Motors; $6.5 billion for BP. In those three programs, there was no cap, no limit. They said, “Ken, we’ll use your judgment in the aggregate and in the individual awards.

That’s quite a responsibility. What is the personal toll on you?

Feinberg: It’s debilitating. You don’t sleep. You worry. You wonder if you are doing the right thing. You think you’re ready when you meet someone because you think that you’ve heard everything and then a victim sits down, usually sobbing, and tells you a story that you thought you were ready for. And that takes its toll.

As much as you’re appreciated, you’ve developed a notoriety for what you do.

Feinberg: I understand the notoriety. I think the purpose of the film is to shed light on what I do and why I do it rather than the notoriety or personal aspect of it. I came into this work knowing I can’t win. You can expect gratitude or appreciation; you don’t get it.

Are you working on any big cases now?

Feinberg: Right now we are trying to resolve about 500 sexual abuse cases involving the Catholic Church in New York. Cardinal Dolan has put us to work to go over the last 40 or more years; children who were abused and the Church put the complaint into a drawer. We are taking out the drawer and studying them and contacting the adults — they are not children anymore.

Jurschick: As soon as we were finished filming, we heard there was something else interesting he was working on.

So this Catholic Church case is new to you.

Feinberg: So far, we have offered compensation to about 140 people and everyone has accepted it.

The fact that Cardinal Dolan or GM comes to you suggests they have a self-interest — that you will come to a decision that will be in their favor.

Feinberg: I think that’s true. They do have an interest. And the reason they come to me is that they want to do the right thing.

I’m saying they have a financial interest.

Feinberg: I am sure they know the last one I did was successful. They see some value in the credibility of the program.

Do you call these large entities that bring you in clients?

Feinberg: That’s an interesting question. I don’t call them clients. I call them interested  parties. I don’t know whether my client is the Archdiocese of New York or GM or if it’s the victims. I am not sure it’s either.

Which way do you tend to lean when it comes to deciding between these parties?

Feinberg: You try and lean on your own judgment as to whether the victim is eligible. In every one of these cases, whomever is paying the victims, whether it’s GM or the government, I have complete discretion in deciding who is eligible and how much they should receive. So I am not really beholden to General Motors. On the other hand, they are paying the freight. They are paying the claimant. And it tends to result in over-inclusiveness if you look at the statistics. More people get paid more than BP or GM or the government might think is appropriate. For example, GM. With the ignition switches, GM found 13 deaths attributable to the defective ignition switch; I found and paid 124. GM found maybe 40 physically injured drivers. I found something like 350.

The title of the film is "Playing God" — do you think that’s an appropriate title?

Feinberg: No. It gives me too much credit. What I do is not playing god. To me, the appropriate title would be “Judge and Jury.”

Feinberg: I do basically what judges and juries do every day. I try to explain to victims when they come to me that I am not valuing the moral integrity of anything. Maybe a priest or rabbi can do that. I can’t do that. All I can do is take out a calculator.