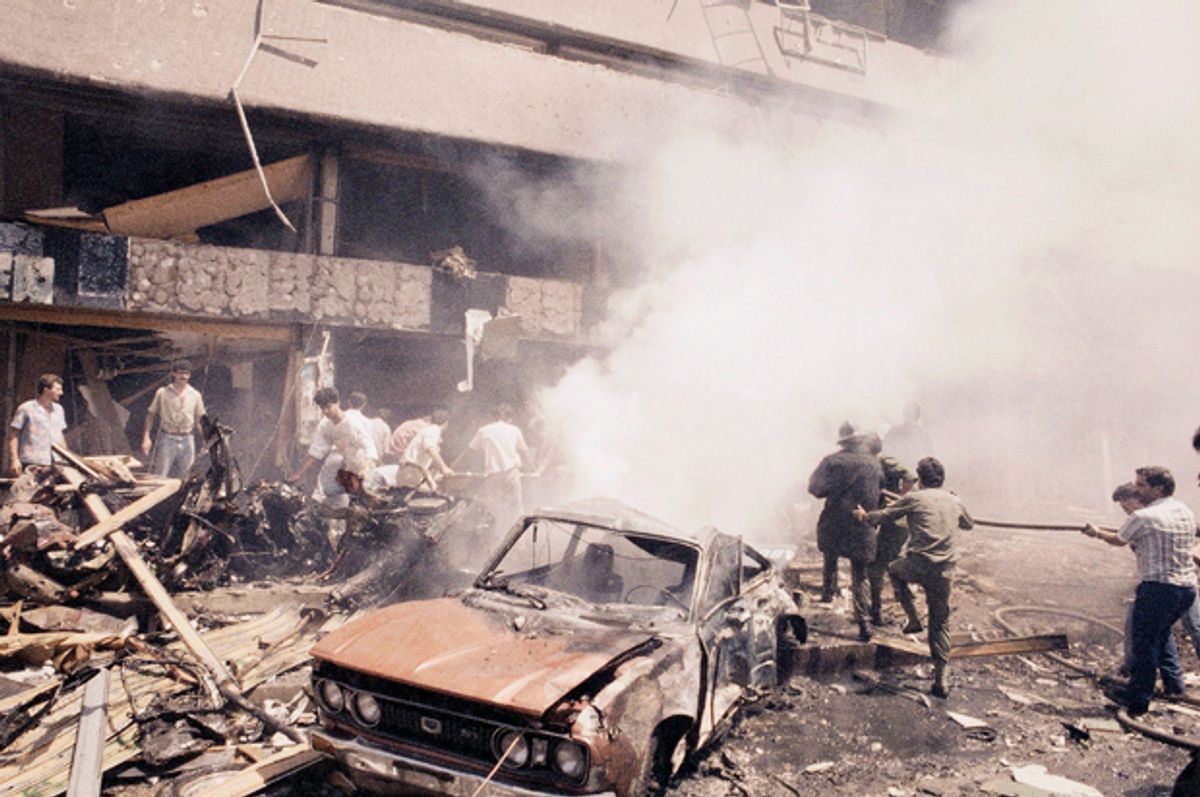 This is what winning looked like in Beirut in the winter of 1974.

My friend John Broder and I were sitting in Row 16, seats D and F on a Middle East Airlines 727 the night we flew into Beirut in December 1974. I remember exactly where we sat because the rest of the flight was empty. We were the only two people on the plane. The war that would consume Beirut and end decades of peace in that beautiful city on the Mediterranean hadn’t even begun. But as the plane landed, we could already see artillery exploding on the hillsides east of the airport.

A few hours later that same night, our room in a small pension shook as large bomb exploded at a nearby shopping center. We rushed downstairs and jumped in a cab driven by a guy named Toufiq who took us to the site of the bombing. Ambulances were already removing the dead and wounded. Several stores in the shopping center had been obliterated. As firemen trained hoses on the burning remains, a bunch of technicals — mini-trucks mounted with machine guns — roared up and surrounded us. Teenage soldiers carrying AK-47s jumped out of the trucks, put us up against a wall and, with weapons trained on us, began to ask questions. We were the only journalists on the scene, and we didn’t have press credentials, but with Toufiq translating, somehow we convinced them we were OK and we started asking questions.

It was another case of one Palestinian faction bombing another, Toufiq explained. It happens several times every night, a fact that was confirmed as yet another bomb went off somewhere else in the city. The militia guys with the AK-47s huddled, a decision was made, half of them loaded into several of the technicals, and they roared off. We were left talking to a young guy with an AK-47 wearing blue jeans, a T-shirt advertising Lebanese beer and a fatigue jacket. “We . . . are winning,” he said in halting English. “You will see.” Somewhere in the distance, another bomb went off. He and the others jumped into the remaining technicals and took off, followed by the fire trucks, leaving us standing with Toufiq next to the smoking rubble.

Only a year later, even more winning was visible as the entire city — street after street, block after block, store after store, apartment building after apartment building, factory after factory — were reduced to bombed-out shells. In December 2003, you could see what winning looked like in Hamam al-Alil, an outlaw town south of Mosul in Iraq. After an improvised explosive device hit the last vehicle of a convoy I was riding in, a captain stood next to a wrecked Humvee riddled with shrapnel and addressed members of his infantry company tasked with “holding” the town, which it turned out was another way of saying winning the town: “We will defeat these people. We will win this thing.”

In Afghanistan in Kunar province along the border with Pakistan a year later, you could see what winning looked like at a compound with mud walls pockmarked by mortars, streaked with black by artillery explosions, standing next to fields lined with stacks of the dried harvested poppy plants. A bearded Afghan man sat in the dirt and poured tea and offered a tin tray of pastries. His son, educated at a college in Pakistan, listened to his father and translated: “One day the Taliban will be gone and you will be gone and we will be winning.” His father smiled. It was a genuine smile, a happy smile. He knew what would happen to make the Afghan people win.

On Thursday in the White House Rose Garden, this is what winning looked like: After the House of Representatives voted to gut the health care of millions of Americans, the president of the United States stood at a lectern in front of about a hundred middle age white men in dark blue suits and he said, “It no longer matters because we won.” He had a smile on his face, but it wasn’t a genuine smile, a happy smile. It was the smile of an angry man who resented what he had had to endure in order to win.

It was the same reaction he had the previous day when he won passage of the budget funding the government until September. Then he had expressed extreme frustration with the way Washington works, said the Congress is "archaic" and there needs to be rule changes, specifically ending all filibusters in the Senate so bills can pass with 51 votes. And when the next government funding bill is acted on in September, if he doesn't win things his way, we "need a government shutdown," he said.

There were winners and losers in the budget deal. Republicans got $20 billion to waste on aircraft carriers and the wars in which we are still engaged in Afghanistan, Iraq and now Syria. Democrats saved a few domestic programs and blocked funding for Trump’s dream wall on the border. But Trump didn’t enjoy the win. Remember all that stuff he said during the campaign about winning? We're going to win so much you're going to be sick of it? His obsession with winning in November is so on the surface that he gave reporters maps of the counties he won in the election — the maps are largely red — to show geographically how he won, as if winning counties somehow hides his loss of the popular vote. (A story this week says he still claims to have won this because he won't let go of the so-called 3 million illegal votes lie).

The urge to look like winners has infected the entire Republican Party. When Republicans lost to Obama in 2008, their strategy became to never let him win again, especially legislatively. They pledged to obstruct not only the bills they disagreed with, but also every single bill.  This is why for eight years Obama couldn't get 10 cents passed for infrastructure, something there is huge support for among Republican and Democratic alike.

It was winning the same way we did in Vietnam when we destroyed villages in order to save them, the same way we won in Iraq when we “took Baghdad” hardly firing a shot and then stood by and watched it be destroyed by looting and sectarian violence. It was winning the way we did in Afghanistan, when we flew into the Korengal Valley and built an outpost on the side of a mountain and spent a couple of years killing a bunch of Afghans and getting 42 of our own soldiers killed and then packed up and flew out. It was winning the way we did when we flew 59 Tomahawk missiles into an abandoned Syrian airfield, killing no one and destroying nothing, and then watched the Syrians start flying combat missions from the field the next day.

We now have two realities in America, and we have two ways of winning. One of our political parties is obsessed with winning at all cost, winning in fact if you have to destroy the thing you’re fighting for. The other party is interested in winning by settling for half a loaf instead of none. The Affordable Care Act is a great example of winning in this way. It didn't insure everyone, and those it did insure, it did so imperfectly. But for Democrats, the ACA was preferable to sitting back and continuing to allow tens of millions of Americans to go without health insurance.

Not for the Republicans. Did you hear Republican Rep. Mo Brooks of Alabama this week? He defended the new health bill by saying that people with pre-existing conditions ought to pay more because they don't live right. And people who live right and take care of their bodies ought to pay less. They deserve lower health care costs because they are winners. The Republicans have an easier time selling their way of winning. Making America great again sounds a hell of a lot better than making America OK again, doesn't it? The Democrats haven't figured out how to sell the idea of winning by settling for half a loaf, but they're going to have to.

This is the battle we will face for the rest of the century, the battle between winners and losers. Trump likes winners. He hates losers. In his world, winners deserve to win and losers deserve to lose. He told us this over and over again during the campaign, and pretty much everything he has done as president reflects this. The problem is, everyone can't win all the time, but everybody wants to win all the time — just look at the whole suburban Little League thing where everyone gets a trophy in baseball; everyone wins a trophy at kids' gymnastics competitions. People want to win. They don’t want to lose, and most of all, they don’t want to “lose” their country. So Trump sells them the idea that they can win back their country with him.

What this is leading to is a smaller and smaller country, a shrinking America. Building a wall doesn't protect the border as much as it makes the country smaller by allowing fewer people to compete to win jobs, health care, air and water, happiness itself. States like Kansas are shrinking their budgets to draw lines under who wins. It's an attitude that says, "I won the born in Kansas game," "I won the born in America game" and "I've got mine, so fuck you."

And a lot of it has to do with race. White people see the demographic figures, that they'll be an effective minority by 2040 or so, and they're literally building walls within walls, communities behind gates and guards and security codes and surveillance cameras to ward off the losers. It has a lot to do with hate, too. You can hear the hate dripping from Trump's voice when he calls people losers at his rallies, and everyone knows who he means: people not like his supporters because they are winners.

Losers are sick, they have dark skin, they come from foreign countries, they have strange religions, they whine about stuff like equal pay, they want to marry the wrong kind of people. Hell, they don’t even conform to what their bodies tell them they are, for crying out loud. Losers, all of them. But now we have winners, and we know what winning looks like. We saw it in the Rose Garden Thursday: winners winning, white men in blue suits led by a man who didn’t even look happy about it.