Death and the iPad: My kid wishes I were dead so he could get more time on the tablet — and I don't blame him

Today’s political realities are creating stores of sympathy in me for my kids’ feelings, however ugly they can get 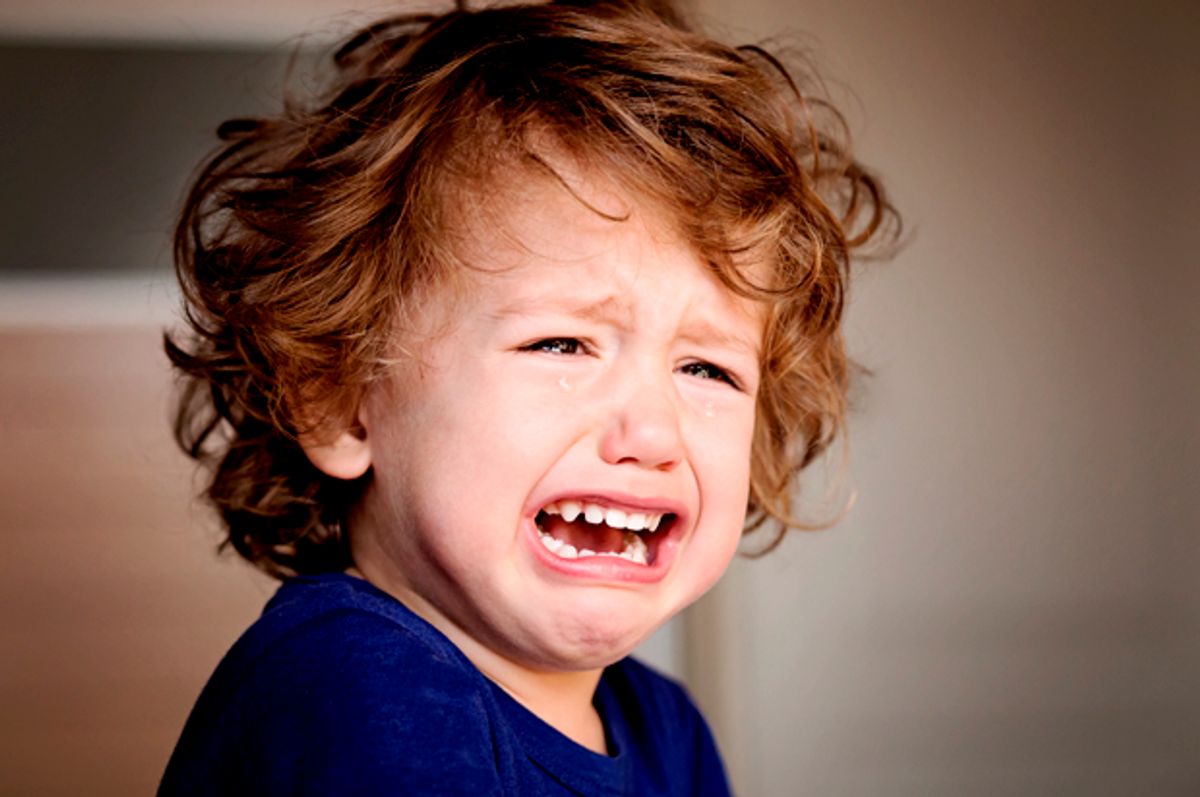 It’s 5:30 in the morning and my 6-year-old has big news. I wake up to him hovering over me, his arms and legs bowing like an eager spider’s and his face an inch from mine.

I roll over, blearily taking his hand, and let him lead me out into the hall. We stumble together in a graying darkness, first through a minefield of Legos that he and his 4-year-old brother have dumped out in the hallway and deserted, and then into the kitchen, where the family’s only iPad perches in its stand.

Holding tight to my hand, he sweeps his other arm stage right to his brother, who is on the living room floor, coloring in the tassels of our rug with a permanent Sharpie.

“Mommy,” he says gravely, “While you were asleep, he told me he wished you were dead so he could play with the iPad all the time.”

I look at the younger one and snort.

“Nooooooo!” his brother shouts. But he isn’t looking at me. His head is bowed. His little eyes screwed shut.

My older son watches me closely, gunning for a ballistic reaction to this offense, and for a brief moment I wonder if he’s making it all up. But he’s not that kind of liar. I know it’s true. Of course it’s true.

It sinks in, and for a moment I’m frozen. Blindsided. Hurt.

This is the first “dead” for me. I’ve gotten “I don’t like you, Mommy,” from both of them, and countless “I like Daddy more than you” whines, brought on by enforced bed- or mealtimes. But no one’s said, “I hate you” yet. Skipping ahead to my death takes me by surprise.

A professional would tell me there’s no way he meant it. That our kids don’t really want to kill us. They just want us to stop standing in the way of all the good stuff.

That may all be true but it’s too early in the morning to take this matricidal fantasy like a grown-up. I beg off to my favorite morning hiding place, close the door, sit down on the toilet lid and sigh it out.

A tablet for a mom. What does a 4-year-old gain in such a trade? He’s not wishing me away so he can binge on math or chess games. If I was gone there’d be more Michael Jackson videos. A new, even screechy-er level of "Angry Birds." A bigger assortment of crappily filmed, amateur ocean-adventure shorts on YouTube, with all their blue light and noisy bubbles and shock and screaming as what might be a squid wraps around what could be a shark.

My kids watch very little TV and for years now we’ve only doled the iPad out in dribbles. They get it mostly to practice school-assigned games, or watch movies on sick days so we can work, or so they don’t draw blood on very long car trips or flights. We set these rules on the advice of parenting experts who’d decreed that even a small amount of screen time could make our developing kids dumb as posts.

It would be much easier and more pleasant for everyone if we relaxed the rules. But every time we’ve considered it we’re reminded that both kids turn into screaming, stomach-clutching, tear-soaked, rehabbing drug addicts whenever we take the thing out of their sticky little hands.

Those docs have gotta be right, we tell ourselves. Look what it does to them.

I get them off to school and kiss the little one in front of his class door like it’s any other morning. The pillowy feel of his cheek gives me a little surge of love, and I climb the hill away from school reminding myself that he’s four, and like all kids at that age, still a resistant ball of id. I begin to feel less hurt by him and more annoyed with the iPad itself.

I’m mad at Apple. At the vexing nature of pairing kids with technology. At Steve Jobs, dead as he may be, who marketed the hell out of his tablet but wouldn’t let his own kid play with the thing.

When I get home I grab the tablet and search for studies that’ll re-up my conviction that we can only feed our kids this kind of technology in modest increments.

The American Academy of Pediatrics has been publishing protocol pieces on tablets for a few years now. The articles are for doctors who advise parents on viewing time for their kids. I’m a few paragraphs into the latest report when it becomes clear that my husband and I have missed an all-important memo.

Turns out that sometime in the fall, when we were ignoring parenting news in favor of the slow-motion car crash that became the presidential election, the AAP changed their collective minds.

Yes, tablets might not be so great for infants they still say, or for toddlers. But once your kid gets past those stages, tablet use suddenly becomes not just allowable but in some situations even recommended. In fact, with a little parental input, an hour a day could even be good for your kids.

At dinner my husband and I sit mutely across from each other and let this news sink in. We happen to use the iPad plenty. Some of our friends might crack a beer or light a joint at the end of the day; we binge TV series and movies in bed to get our escape on. It’s such a habit for both of us that if our Wi-Fi suddenly died, we might want to take somebody out too.

This kind of hypocrisy hasn’t bothered us much. We enforce lots of expert-informed rules with our kids that we’d never abide for ourselves. But this also isn’t the first time we’ve been hoodwinked by flip-flopping experts who made our family life stricter than we’d wanted. (I’m looking at you, lactation fanatics.)

Given the state of the nation these last few months, our efforts to abide by all these rules are starting to seem precious. Why did we ever think that watching the odd movie or playing a few video games was going to make a 4- or a 6-year-old incapable of learning? And why, in this stark new world, aren’t we letting them learn the essential coping mechanism of having escapist fun?

Today’s political realities are also creating stores of sympathy in me for my kids’ feelings, however ugly they sometimes get. Maybe killing me isn’t the answer, buddy, but do you wanna rail loudly about whatever injustice you feel that day? Me too!

Neither of us grabbed the iPad that night and handed it to him. We weren’t going to reward our son so soon after he wished me gone. But we’ve since relaxed the rules a bit and are supporting both kids in watching shows that they choose and playing games a little more often.

Rather than herding them into the tub after that evening’s dinner, my husband grabbed the remote, turned on the flat screen, and let a Michael Jackson YouTube playlist rip.

The kids leapt up from the table and took positions in front of the TV. The older one stood still at first, trying to deconstruct the complexities of the moonwalk, but the little one began flailing right away. After a few seconds, he jutted his arms out and started to spin.

He spun so hard and long that when the song ended he fell on his back screaming with laughter. As the rest of us got ready for song number two he kept it up: rolling and cackling like the miniature madman that he is, way too busy feeling what he was feeling to look at the screen.