Duty to warn: Shrinks can't say that Donald Trump suffers from a mental disorder — but we can 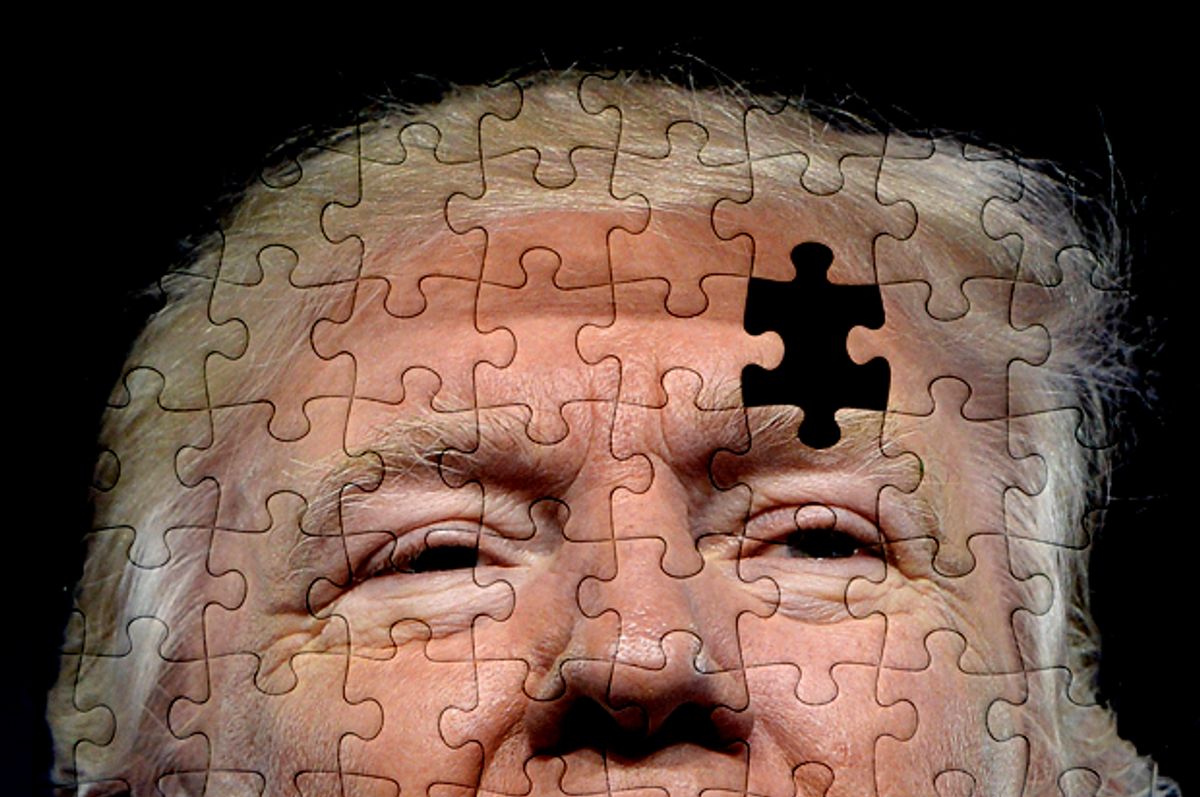 President Donald Trump has a personality disorder that we’re not supposed to talk about, and that makes me furious. The Goldwater rule, an ethical norm from the 1960s that forbids psychiatrists and psychologists from diagnosing public figures they haven’t been able to evaluate in person, has gagged the most knowledgeable among us from speaking freely. A man with no impulse control and no chance of improvement is shooting his missiles all over, not to mention targeting vulnerable populations at home. The world is in a panic while the doctors worry that he’ll sue.

Beyond compounding the crisis of public ignorance, the moratorium is a reflection of the way professional norms are all too often wielded to protect predators and silence women. The media’s dispiriting willingness to roll over and let old white men dictate the boundaries of legitimate conversation and expertise has to end.

Trump benefits immeasurably from the Goldwater rule, which was put in place because Sen. Barry Goldwater, the 1964 Republican presidential nominee, sued a magazine called Fact, which solicited diagnoses of him during the election campaign. Trump normally has to buy his victims’ silence himself, but this gift came for free. Since he will never allow an independent evaluation of his competence, the American Psychiatric Association and its members have kept quiet.

But why insist on a diagnosis? If labeling him is the main obstacle to talking about Trump’s disorder, let’s ditch it. When I asked my psychiatrist about the issue, he admitted that diagnosing personality disorders is “squishy” at best. Mental illness often blurs the lines between nature and nurture, and diagnosis is both an art and a science.

There are blunt criteria set out in the "Diagnostic and Statistical Manual of Mental Disorders," or DSM-5, but they require finessing in person. Diagnosing personality disorders may come down to -- hold onto your hat here -- how the person makes you feel. Are you a shadow in their presence? Do they show remorse or consideration for others? Do they seek to manipulate and distort reality? Imagine real-life vampires who have conned you into thinking it's natural for them to suck the life out of you. It’s understandable that people are cautious about labeling such a person.

Our inability to diagnose has led to de facto censorship on the subject. For purposes of saving the republic, all we need to know is that our president is delusional, dangerous and incurable. He’s a 70-year-old con man who relishes violence, abuse of power and deception. He will never, ever change.

The silence was broken last week by several renowned psychiatrists at a Duty to Warn conference organized by Dr. Bandy Lee. She has formed a coalition of more than 800 mental health professionals who believe that Donald Trump is dangerous to the health and safety of their patients. Dr. Lee is working in conjunction with Dr. John Gartner, whose online Duty to Warn petition has already accumulated more than 52,000 signatures from fellow mental health professionals.

Though Lee’s town hall meeting was initially sponsored by Yale’s School of Medicine, Department of Psychiatry and School of Public Health, they all bailed out before the event, leaving Lee, a Korean-American woman, to run the conference alone. Despite the positive coverage of her conference, Lee told New York magazine that she has become a pariah in her department. This is not an accident: The academy and professional associations are old boy’s clubs that respond to challenges to their authority by circling the wagons.

Take Allen Frances, for example, who wrote a letter to the New York Times objecting to “fevered speculation” by the media and other psychiatrists. The irony of Frances marking “narcissism” as his personal territory is lost on him. The problem with Trump, he states with unearned certainty, is political, not psychological. He fails to address why it can’t be both. Instead of wrestling with the complexity of the issue, with one stroke he moves to delegitimize the evidence as irrelevant.

It’s reminiscent of George Orwell’s essay, “Lear, Tolstoy and the Fool.” An aging Tolstoy rants that “no unhypnotized observer could read ['King Lear'] to the end” and enjoy it. Orwell skewers Tolstoy’s religiosity, noting that his aim in old age was to “narrow the range of human consciousness.” Tolstoy misses the obvious parallels between himself and Lear, another powerful egotist undone by his own deranged attempts to control his legacy. As Orwell observes, Tolstoy “does not know just what he misses in Shakespeare, but he is aware that he misses something, and he is determined that others shall be deprived of it as well.” Autocrats aren’t good at letting go.

Ignoring Trump’s disordered behavior is as absurd as excising "King Lear" from world literature because Tolstoy says we should. There are some professionals who genuinely don’t think the president is mentally ill, but as a lawyer, I know that professional associations exist to protect their members, often at public expense. We wouldn’t be throwing the baby out with the bathwater if the American Psychiatric Association weren’t so concerned about its members’ liability. Don’t tell me that the Cheeto Emperor is streaking down Fifth Avenue but that because he put on matching socks this morning, we can’t notice that he's naked.

I’m not a mental health professional so I’m not bound by their ethical considerations. I am a patient, though, and I’ve been in and out of therapy since early childhood, partly because depression runs in my family but also due to the chronic trauma of growing up in the grip of someone with a severe personality disorder. One of my earliest memories is of playing Operation seated on the floor of the court-ordered therapist’s office.

Consider the virulent anxiety Trump has inflicted on the entire planet, and then imagine the force of its impact within the confines of a home.

I wanted to weep when the New York Times shushed Ruth Bader Ginsburg for warning us about Trump’s existential threat. When the Los Angeles Times' editorial board wrote recently that it could never have anticipated the train wreck of the Trump administration, I screamed in frustration. Those of us who have had our lives derailed by abusers like Trump know exactly how much damage they can do.

How many abusers with personality disorders thrive because men like Allen Frances don’t know with certainty what sick people do behind closed doors? Even where there is evidence, it’s excluded under arbitrary standards. "He said, she said" is not a standard of equality in a patriarchal system. Just ask Elizabeth Warren.

Meanwhile, how can Trump’s illness be irrelevant when his delusions are shaping our reality? He’s commanding the United States military absent a moral code, while insisting that he’s more infallible than the Pope. How soon until we hear about Mar-a-Lago, the Florida Vatican?

There are those who will say that this discussion further stigmatizes the mentally ill. Not all mental illness is created equal. Speaking for myself, my crazy can be disabling at times, but I’ve learned to manage it over the years with therapy and medication. I am grateful that I can afford them both. The vast majority of mentally ill people, like the homeless veterans who populate our streets, are peaceful people who go about their lives internalizing their pain rather than projecting it onto others. These people deserve compassion and care, not mistreatment.

We cannot say the same for Trump. He makes every disturbed feeling our problem. He’s like the guy in a gangster movie who sits down for a poker game, the tension escalating until a throwaway joke about his tiny fingers causes him to stab someone’s hand to the table.

As a serial predator, Trump looks at people like a lion eyes a herd of antelope. Does the lion care which antelope he eats for dinner? No. He’s an equal opportunity abuser, as Ivanka would say. But he’s lazy. Why challenge himself with the head of the pack when there are a few lagging behind who can’t put up much of a fight? His administration reeks of social Darwinism. Who can forget Donald Trump Jr. dehumanizing refugees as Skittles?

Now that we’ve put Trump at the top of the figurative human food chain, let’s not allow the ignorance surrounding mental illness to flatten an urgently needed discussion. We cannot ignore his pathological need to dominate while he provokes Kim Jong-un and refuses to shake Angela Merkel’s hand. It’s not that Trump doesn’t want to behave -- he simply cannot. Like Lear wandering in the storm, we have blinded ourselves to the obvious, and the results could be catastrophic.

Anna Lind-Guzik is a writer and translator with advanced degrees in law and history from Harvard and Princeton. She is a cofounder of the Anti-Nihilist Institute on Medium. She previously taught courses at Duke on refugees, illiberal legal regimes and Russia. Follow her on Twitter.