Eat it up: The second helping of "Master of None" is artistically satisfying and visually sumptuous 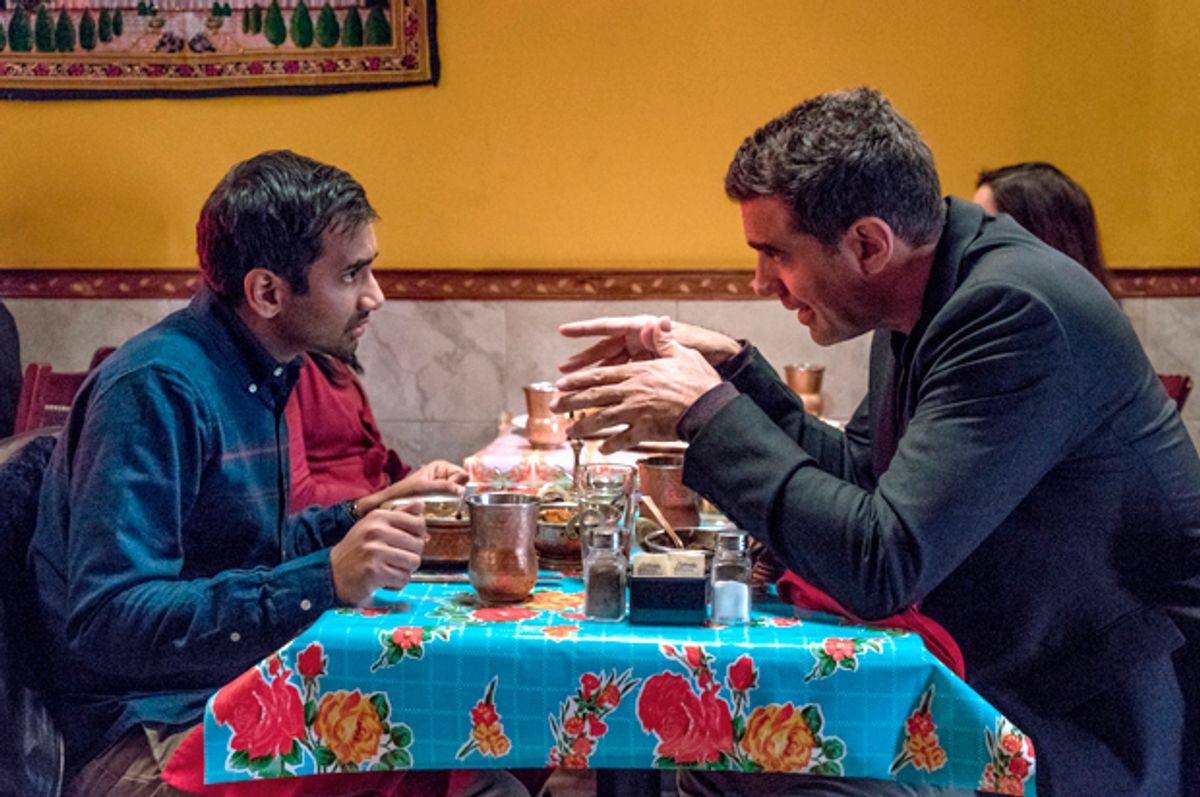 Among the very few concepts that can overcome cultural barriers, social awkwardness and personality mismatches, arguably one of the most potent is a shared love of delicious food. A quality dish can create new friendships, heal broken bonds and fortify one’s wavering resolve. Good food connects with the soul and connects souls to each other.

In a variety of ways Netflix’s “Master of None” has demonstrated this from its very first episodes. Dev (Aziz Ansari) and his closest friends Brian (Kelvin Yu), Denise (Lena Waithe) and Arnold (Eric Wareheim) spend a great deal of time figuring out where to gather and what to eat. In the show’s New York City, a place in which anyone would aspire to live, a plate heaped with authentic old-school Italian food can bridge generational gaps, and the right sandwich can mend a friendship. Knowing where to get the best tacos is akin to having a map to some undiscovered wonder.

Navigating this ocean of options can be a hell of a distraction from what matters, namely the quest to figure out who to become and what life direction to take. The first season of “Master of None” also placed Dev at the center of debates about racism, feminism and the specific conundrums faced by children of immigrants. Dev and Brian are benefactors of their parents’ struggles, reaping the plenty their parents desired for them. And they feel alternately ungrateful and unapologetic for not knowing what to do with it.

“Master of None” returns for a second season on Friday, May 12, with a more overt emphasis on cuisine (if that’s possible), while also relaxing into the main character’s search for love and meaning and a career that doesn’t wither his spirit into dust. In this respect Ansari’s comedy reads like many other series about young adults starting out in the world, and probably wouldn’t be viewed as extraordinary, paradigm shifting television save for its obviously auteur-cinema influences and its emphasis on life’s disorderly nature.

Simply put, it’s a show long on style, hitting all the right aesthetic tones, but with enough substance and intimacy to allow Ansari and his co-creator Alan Yang to indulge in deliberately tailored visual flights of fancy.

Season 2 of “Master of None” continues the show’s sense of fearlessness by taking side-trips away from Dev’s life and into the world of characters we may barely have gotten to know in the first season, or that we may meet but once in the second and never see again. The latest batch of episodes starts mid-detour, in fact, joining Dev during his extended break in Italy, where he's learning how to make pasta, his favorite food of all time.

Sometimes existential meandering can yield dream-like art, the likes of which shape the first episode's unapologetic homage to Italian neorealism that’s shot entirely in black and white, set in Modena, Italy, and titled “The Thief.” The world of “Master of None” is one long distillation of the humdrum through comedy and stylized artifice set to soul and an ’80s and ’90s hip-hop beat, so imagining Dev’s Italian renaissance as a chapter ripped from director Vittorio De Sica’s oeuvre comes off as neither far-fetched nor pretentious.

Rather, it’s indicative that “Master of None” has grown into a series that is comfortable in its skin and unshackled from any obligation to define or prove itself. Season 1 took care of that with ease, earning a primetime Emmy for Outstanding Writing for a Comedy Series and a Peabody Award in doing so.

Throughout these new episodes Ansari and Yang allow Dev to travel the road of passion and desire, a quest of the soul that begins in Italy and ends someplace up in the air, though Dev’s physical coordinates place him in New York.

In season 2 Dev returns to New York from his pasta sabbatical and scores a gig as the host of a reality competition, a job that involves food, nets him a steady paycheck, requires zero creative energy and saddles him with a bombastic celebrity chef as his boss (played by Bobby Cannavale). While Dev's show does nothing to feed his sense of inquisitiveness and adventure, it is nonetheless a step up from his minor role in Season 1’s schlocky B-movie “The Sickening.”

And once again, Dev’s dilemma is a question of handling a buffet of good fortune. He’s hosting a TV series and has made a loyal new friend in Italy (Alessandra Mastronardi), but it’s not enough. Dating apps ensure an active romantic life, but meaningful connections elude him. Ansari discusses these issues in his stand-up routines, but “Master of None” enables him and Yang to navigate them with a level of insight that speaks to Dev’s folly and how frustrating a land of endless choice can be.

“Master of None” remains a show spiced with social commentary, though perhaps a bit more subtly than in season 1. Part of its subversion stems from centering its focus on Dev, an American of Indian descent whose ethnicity doesn’t take the lead in his interactions but isn’t glossed over, either.

Ansari’s father Shoukath and his mother Fatima return as Dev’s parents, serving as comedic foils (particularly Shoukath, who gets some hilarious scenes his season), and in the third episode, “Religion,” they’re the standard-bearers of a tradition from which their son joyfully deviates.

And two of the new season’s best episodes aren’t even centered on Dev: “New York, I Love You” tacitly acknowledging the series’ privileged youth by training its focus on New Yorkers, people that Dev and his friends pass by and take for granted, in an excursion from the main plot that manages to be equalizing in a way that feels honest.

The second, “Thanksgiving,” features Waithe’s character Denise and reveals the origin of her friendship with Dev, depicting her slow process of coming out to a loving but resistant mother (Angela Bassett) and aunt (Kym Whitley).  In departing from Dev’s plotline, Ansari and Waithe (who co-wrote the episode) confront the specific cultural difficulties Denise, a black woman, faces in coming out in a way that makes the highest use of the show’s naturalistic style.

Nearly as memorable, of course, are the tight shots on the holiday meal — the macaroni and cheese, the turkey, the joined hands. By this point in the 10-episode season (it’s the eighth episode) you’ll be long past that opportunity to select whether to feast on all the episodes in one sitting, or to savor each installment in order to make it last. Either method is acceptable. The choice, agonizing though it may be, is entirely yours.