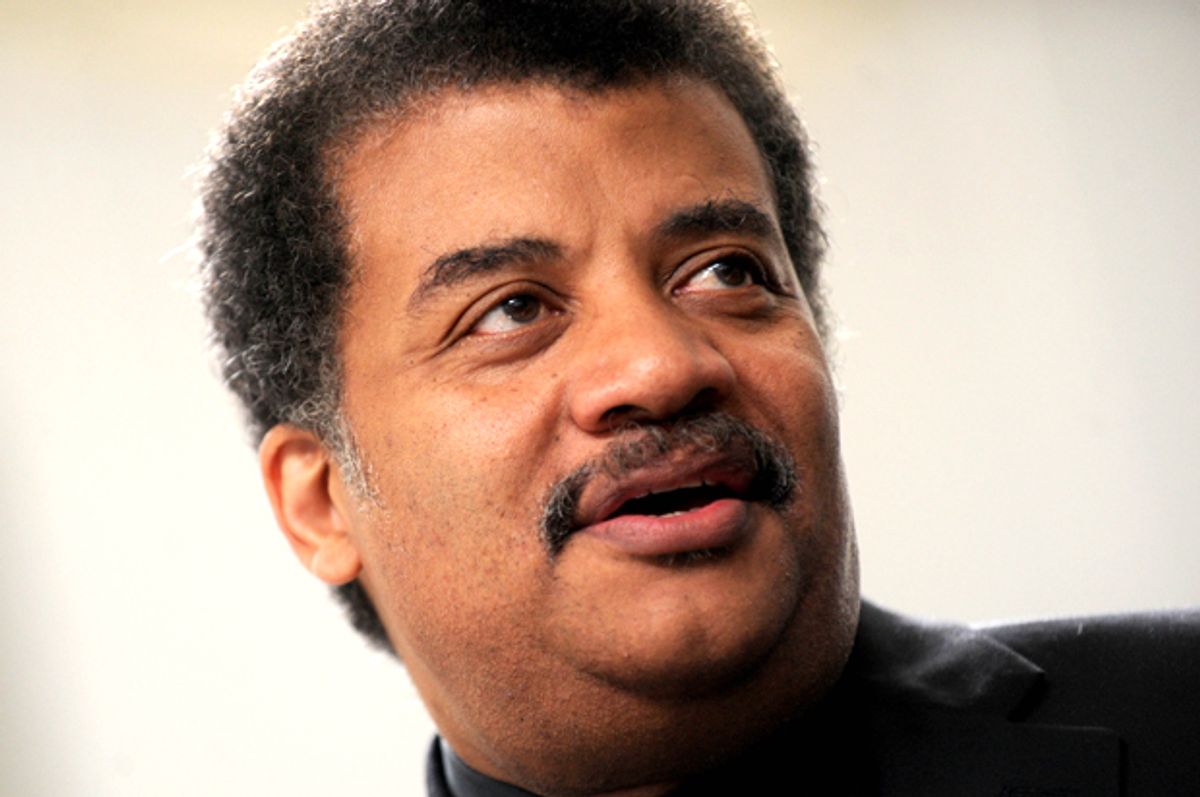 In late July 2014, a Twitter user named @dogboner posted a photo of a man on a subway train working on his laptop, accompanied by the caption, “Some guy using his laptop on the train like a dumbass nerd lol.” The “dumbass nerd” in question was astrophysicist, author and TV host Neil deGrasse Tyson. Instantly, “@dogboner” (whose real name is Michael Hale) faced a tweet-storm of abuse and haranguing from social media users for whom Tyson has emerged as a kind of messiah of modern rationalism.

The photo was shared on the popular Facebook page “I Fucking Love Science” (which currently engages some 25 million-plus users), leading to even more angry call-outs. Hale was called “stupid,” an “underachieving burnout,” and worse. One person encouraged Hale to “fall into an ocean of A.I.D.S.” Few had bothered to consider that the original tweet was nothing but the sort of stupid, ironized joke that savvy Twitter users major in. Legions of self-satisfied rationalists and armchair logicians who pride themselves on their superior intellect were effectively fleeced.

Beyond being (really, really) funny, the incident was revealing. It spoke to the vehemence and belligerence science seems to inspire in popular culture. It also laid bare the frothing cults of personality surrounding people like Tyson, Bill Nye, Canadian astronaut Col. Chris Hadfield (who live-streamed parts of his 2013 mission to YouTube, including a much-shared acoustic guitar rendition of David Bowie’s “Space Oddity”), and other modern pop-star scientists.

It’s consistent with a broader cultural trend. Recent films about science and scientists, like “The Imitation Game” and the Stephen Hawking biopic “The Theory of Everything,” have earned critical acclaim and commercial success. CBS recently renewed its uber-popular science dork sitcom “The Big Bang Theory” for what feels like its 47th season. Even fictional characters — from the “Big Bang” boys, to Matt Damon’s marooned astronaut in “The Martian” vowing to “science the shit” out of problems, or Aaron Paul’s skeezy Jesse Pinkman in “Breaking Bad” exclaiming, “Yeah science, bitch!” — speak to the cultural ascendency of scientific thinking.

Neil deGrasse Tyson’s new book, released earlier this week, is called “Astrophysics for People in a Hurry.” It’s dedicated to “all those who are too busy to read fat books yet nonetheless seek a conduit to the cosmos.” The dedication functions as a mission statement for the contemporary culture of pop science: taking mind-bogglingly complex ideas, stripping them down to their nuts and bolts, padding them with colorful allegories and dorky jokes, and making them accessible to the layperson.

As expressed in his books, his documentary TV series “Cosmos: A Spacetime Odyssey,” and popular Twitter account (boasting some 7.3 million followers), Tyson is a master of streamlining and simplification. A slender volume at just over 200 pages, “Astrophysics for People in a Hurry” makes a previous pop-physics landmark like Stephen Hawking’s 1988 bestseller “A Brief History of Time” look like Charles W. Misner, Kip S. Thorne and John Archibald Wheeler's dense 1973 doorstopper “Gravitation.” Likewise, Tyson’s writing is given to colloquialism (“Quarks are quirky beasts,” he writes, early on) and unadorned, let-me-break-it-down-for-you anecdotes. In one section on the inarguability of physical laws, Tyson explains density with a story about sending back a mug of hot cocoa that didn’t come dolloped with whipped cream, after arguing with the waiter about whether or not the missing cream had sunk to the bottom (such stories suggest just how much fun Neil deGrasse Tyson must be at parties).

This folksy, brass-tacks approach to science is not without its problems. Indeed, the whole domain of “pop science” and “pop-star scientists” like Tyson is wrought with controversy, both inside and outside the larger scientific community. In his “An Introduction to Science and Technology Studies,” philosopher of science Sergio Sismondo describes the widespread popularization and dissemination of science to the general public as “a necessary evil, not to be done by working scientists still engaged in productive research.”

Beyond such negative effects on the nitty-gritty of hard science, popularization and simplification pose a broader cultural problem. With their paraphrased ideas, relatable yarns, and mic-dropping, “Yeah science, bitch!” approach to the field, the pop-star scientists command a genuine authority. And they pass that authority onto their readers and fans, who rush to their defense to attack smirking Twitter jokers and share “I Fucking Love Science” memes. Pop science offers the general public the air of authority and credibility of science without all the. . . you know, science. There’s a word for this highly empirical, authoritative worldview: scientism.

Scientism refers to the view that science possesses a unique claim to truth, and that it reduces knowledge to that which is provable by the scientific method. It’s not even a particularly new or novel idea.

The publication of Thomas S. Kuhn’s “The Structure of Scientific Revolutions” in 1962 marked a major turning point in thinking about science. Kuhn challenged the old enlightenment ideal that pitched scientific discovery as a straight line trending ever upwards, with knowledge and discoveries accruing across time.

According to Kuhn’s historical research, scientific discovery was marked by stops and starts, dead ends, and plain wrongheaded thinking, occasionally reoriented by major discoveries and revolutions in scientific thought (such as those undertaken by Copernicus, Newton, Einstein, etc.). Such discoveries tend to be regarded as “inevitable” only after the fact. It’s sort of like the old adage about history books being written by the victors. The history of science is similarly revisionist, positioning all discoveries as necessary stages in an ongoing process of unfolding, when they really may be the result of revolutionary thinking, anomalistic approaches to scientific thinking, crises in knowledge, as well as the mitigating influences of society and culture. Kuhn called these — minting what is now a pretty much meaningless buzzword — “paradigm shifts.”

Kuhn’s book undermined the idea that science and the scientific method held a unique relationship to the truth of existence and being. Facts and truths are tinkered with to fit the idea of scientific methodology as a grand process that is slowly unpeeling itself like some coy, gargantuan banana. In reality, facts are slippery, and sometimes malleable to the point of meaninglessness. Just think back to those old kitschy magazine ads with boastful claims like “More Doctors smoke Camels than any other cigarette!” for examples of how science, and facts, can be wrested to serve the most malicious agendas.

Earlier critics of scientism, like the economist Friedrich Hayek, looked at the way in which so-called “soft sciences” (i.e., the social or moral sciences) adopted the scientific method in order to acquire the patina of objectivity, as if things like human action, motivation and consciousness itself could be measured as quantifiably as an apple bonking someone on the head. The modern pop science preached by Tyson and others poses a similar threat: privileging the hard, the quantifiable, the unproblematically knowable at the expense of other disciplines.

On his new Netflix series “Bill Nye Saves the World,” the 61-year-old “science guy” (who, while he has a degree in engineering is not an actual scientist so much as a sort of science mascot) constantly explains natural phenomena by exclaiming “It’s science!”

He does so to canned hurrahing, whoops and rounds of applause. The studio audience isn’t cheering the result of one or another experiment, or even Nye, but science itself. There’s something disturbingly anti-scientific about all this. The pop-star scientists become modern-day soothsayers. They are something to believe in. As long as we believe in them, we don’t have to do the work of science, or even understand it with any nuance. Under such conditions, science — that legendary realm of experimentation and free-thinking — becomes nothing more than another form of indoctrination. And why should we be surprised? Guys like Tyson and Nye offer the rarest, and perhaps most desirable of promises: certainty. They grant the authority and conviction that science is said to provide, wielded like a blindly bright iPhone flashlight to ward off the consuming dimness of uncertainty and unknowability.

There’s no doubt that science is important. Everybody — well, almost everybody — wants to see a cure for cancer and more cheap, renewable energy sources. And science is increasingly under threat, be it from lack of government funding, vocal anti-vaccination activists, or plain moronic young-earth creationists and flat-earth truthers. But anti-scientism is not the same as being anti-science, any more than deciding not to wear purple shirts would be a denial of the existence of purple as a color. Interrogating scientism is merely a way of making sure the cultural regime of science can weather the scrutiny of its own methodology.

After all, what good is the authority of science, of what inherent value is a dog-eared, half-skimmed copy of “Astrophysics for Dummies” when the smugly scientifically-minded front-liners in baggy “Bazinga!” t-shirts shoring up the battlements of loving science can be so dumb as to be duped by a social media snarkster maneuvering under the ludicrous nom de guerre “dog boner”?