The art of the art of Trump: A critical reading of "The Visionary," that painting of him at Mar-a-Lago 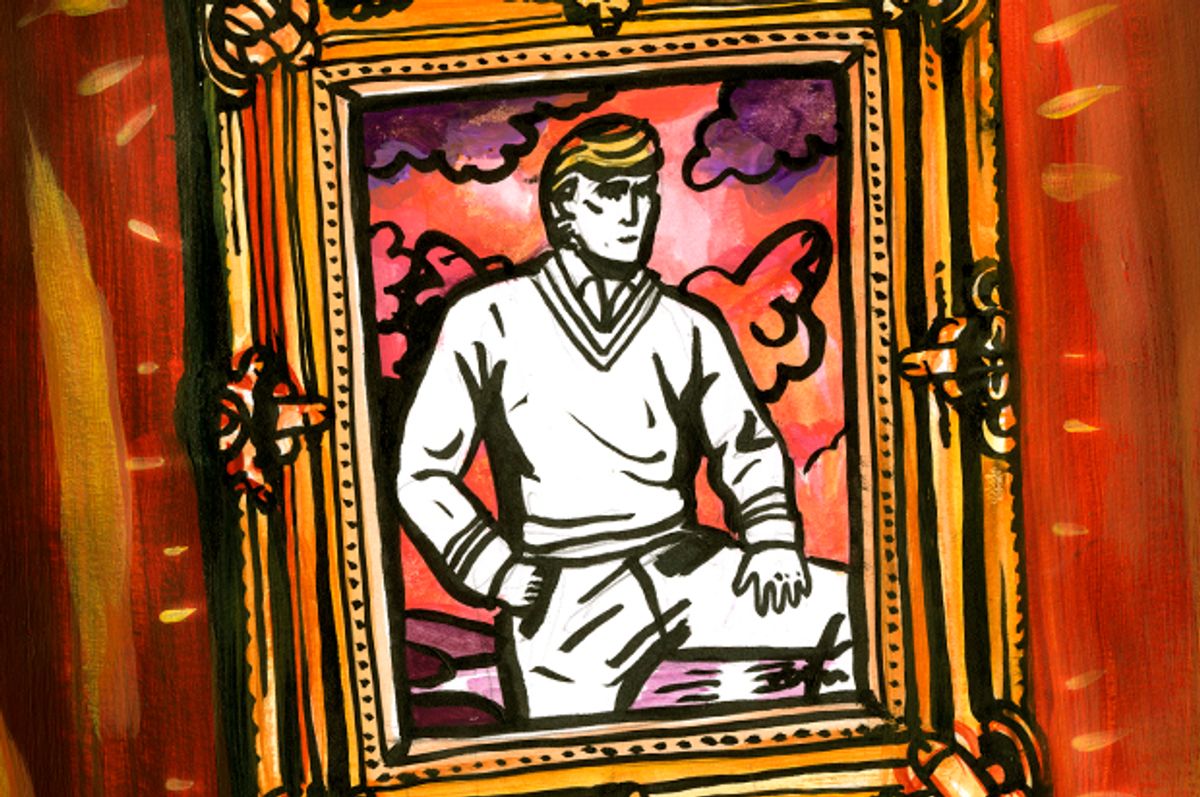 Let’s pretend, just for a moment, that we do not know the subject of this portrait. Imagine that it is several centuries into the future, some computer virus has wiped clean digital and online files, and historians are back to doing what they did until the 1980s, when computers first began their rapid invasion and mastery of our everyday lives: that is, examining physical remnants of the past and interpreting works of art, in particular, as cultural time capsules that reveal information about what or who is depicted.

Sometimes this information was consciously imbedded into the artwork. If someone chose to be portrayed for posterity wearing a suit of armor, with a sword at his side, then that was a decision to be remembered as a warrior. But other pieces of information were inserted into the work by the artist — perhaps surreptitiously, perhaps unwittingly, perhaps not as the sitter intended. Goya’s portraits of King Charles IV of Spain make clear that the painter thought very little of his patron, recording him as a doughy doofus. The great Gainsborough double portrait, "Mr. and Mrs. Andrews," has long been interpreted as conveying some hidden secret about the couple that Gainsborough knew, and that the couple would have rather kept secret. But the artist presented what he saw, and perhaps laced the work with subtle references that were overlooked by the patron (after all, artists had to satisfy their subjects in order to be paid), but which viewers can now “read” into the work.

So what if we present this art-historical approach — interpreting a portrait as if we know nothing of its subject — and see what we can glean from it, as objectively as possible? It’s an artificial exercise, but not without a point. The trick is forgetting that we know all too well the subject of the portrait. But we’ll get to that later.

The painting in question is quite presumptuously entitled "The Visionary." It was painted by Ralph Wolfe Cowan, a Palm Beach-based artist who has made of a career of portraying celebrities in a heroic (some might say mock-heroic) realist style that shows skill at his craft, though if it suits your own artistic tastes, that is a matter of personal preference, and one we will set aside. To read Cowan’s account in the Palm Beach Post of making the painting, it was as much his idea of how to present Trump as it was his subject’s. Portraitists traditionally discussed with their subjects how they would be presented, so this is in keeping with the art history of which it is, it must be said, a part. The style also is consistent with Cowan’s other works, for instance his portrait of Elvis Presley, which some may find recall the movie posters for Chevy Chase’s National Lampoon "Vacation" films.

"The Visionary," painted in 1989, hangs in the library bar at Trump’s Mar-a-Lago Resort in Palm Beach. It shows Trump as a sort of messianic über-WASP, in a white tennis sweater, and with a mythical sunset behind him. Playboy magazine described Trump in the portrait with “his skin glowing like the top floors of Trump Tower at sunset.”

In the European Review, theologian Richard Major wrote, in an article entitled “America Worships the Sham-Messiah:” “If you visit Mar-a-Lago — and thank God you won’t — you’ll see the official portrait. It shows the Donald robed in white, glowing superhumanly orange (as Krishna is superhumanly blue), un-deflatable, evidently immortal; about him the sky breaks open in uncreated radiance.” He comments on the title of the painting: “The joke is that the visionary can have no vision. There’s nothing in the picture but himself.”

Writer Ben Kopit described the painting as “Trump has here demonstrated the confidence of his place in tradition to announce that he is the heir to the gentlemen-explorers of Caspar David Friedrich. Except instead of conquering the mountains, because they are there, he is conquering beginner tennis, because it comes with his country club membership.”

But these are interpretations by cultural critics who are no fans of the Orange One. I was curious how a trained psychologist would analyze someone who desired to be presented this way.

“This paradox, of a young sportsman standing in front of a Genesis twilight moment, reverses the essence of this picture; it evokes inadequacy, which goes on as we observe the art work: The White Anglo-Saxon Protestant is modeling at the moment of twilight, where the golf, croquet or tennis court transforms into a divine celestial moment,” said expressive arts therapist Dr. Avi Goren-Bar.

Regarding the predominant color palette, pink and gray, Goren-Bar continues: “Pink, the color of everlasting adolescence, the pinkish femininity turns the Trump face into a doll's plastic desired toy, while the glimmer in the forehead hints of a potential crack in the effigy. In contrast, the hair is gray and symbolizes maturity of an elderly figure. Put the two together and you get an ageless human being, a ‘Bazooka Bubble Gum’ American modern version of a Greek god.”

The painting is, at least, honest, in that it can be interpreted as presenting someone with misguided messianic aspirations, wishing to be worshipped rather than loved — but in a 1980s WASP kitsch way that is exactly the opposite of good taste. It simply reinforces a lack of sophistication and pedigree that, ironically, the presentation of such an artwork seeks to establish.

As with most art, context is key to a complete interpretation. The story behind the painting is linked to a battle between Trump, described in a Vanity Fair article on the subject as “the loud, new-money outsider” and the Old Guard of “one of the richest and most insular towns in America.” He was determined to buy his way into Palm Beach society by literally purchasing what no one else could, or possibly would: the enormous, rather tacky mansion of the Post family (of cereal fame). Mar-a-Lago is 110,000 square feet of house, including 58 bedrooms, and with a golf course attached. Town & Country magazine called it the folly of “an American in love with the artistic splendor of Europe…Hispano-Moorish tiles of Spain; frescoes of Florence; Venetian arches…and a ninety-foot castle tower.”

Indeed, it was designed by a scenographer, Joseph Urban, best known for the Ziegfeld Follies. Trump bought the home and converted it into a super-posh private club, fighting that Palm Beach Old Guard, who did not want the likes of him around. His presence was a middle finger to the society into which he wanted to be accepted, and "The Visionary," which was painted after Trump decided to buy Mar-a-Lago, but before he had pushed the sale through, hangs, then, as a plastic legacy of that middle finger, dressed up in tennis whites.

This is a story that could come from any era of history (and for this reason would make great opera), and fits snugly into the history of art and what one does with lots of money and a personal feeling of inadequacy. New Money is often wealthier than Old Money, but Old Money has the blue blood and a sense of propriety and aristocracy that comes from having been The Establishment for a long time. This phenomenon was most prevalent among American “robber barons” of the Edwardian Era, tycoons like J. P. Morgan and Frick and Ford and Getty, who bought treasures from aristocrats in Europe who could no longer afford to keep them. They did this largely in the form of art, but also in properties — sometimes castles, vineyards and even titles. This psychology can be seen throughout Trump’s history and portfolio, with his choice of a gaudy, Versailles-style aesthetic for his buildings, to naming his son Barron (the extra “r” is for “rich,” one presumes). If ever there was an indication of an ardent desire to be seen as classy and aristocratic, that is it.

His ploy for the resort worked to a certain extent. Vanity Fair reports that there are around 500 members of the private club, who each paid a $100,000 initiation fee and who cough up $14,000 a year in membership dues. A wealthy and significant slice of Palm Beach folk bought into the New Money invasion.

Perhaps a closer look at the painting would have dissuaded them. Goren-Bar concludes: “The trousers are heavily starched into three folds due to the hand in the pocket and the bended left leg, tension which focuses on the figure's loins. This soft feminine young man may turn into a sexual and dangerous modern satyr. This half comic-book hero is unreliable and operates as a trickster. Wearing a persona (which corresponds to a symbol of successful American-English colonial status), this everlasting gray-haired pink adolescent is a 'Puer aeternus' (eternal child) whose power lies in its swindle: sophisticated fraud.”

To be fair, Goren-Bar was familiar with the subject’s history, but he assured me that his approach was kept as objective as it could be. Had he been shown a portrait of an anonymous subject, he would have had presented the same interpretation, drawn from his decades of experience in Jungian analysis and expressive arts therapy. Pictures sometimes convey more than their subjects realize.

There’s a punchline. The Vanity Fair article I mentioned was written after one of many visits by the new president to Mar-a-Lago. But Town & Country just reported that according to the Center for American Progress, which maps where tax dollars go, an estimated $25 million from our taxes, fellow Americans, has already been spent just to allow Trump to visit Mar-a-Lago seven times. Good thing it closes in May during the off-season. But not to worry, folks, it’ll be open again come October.