WATCH: SNL's Kate McKinnon and Alex Moffat "do" Morning Joe with a steamy send up 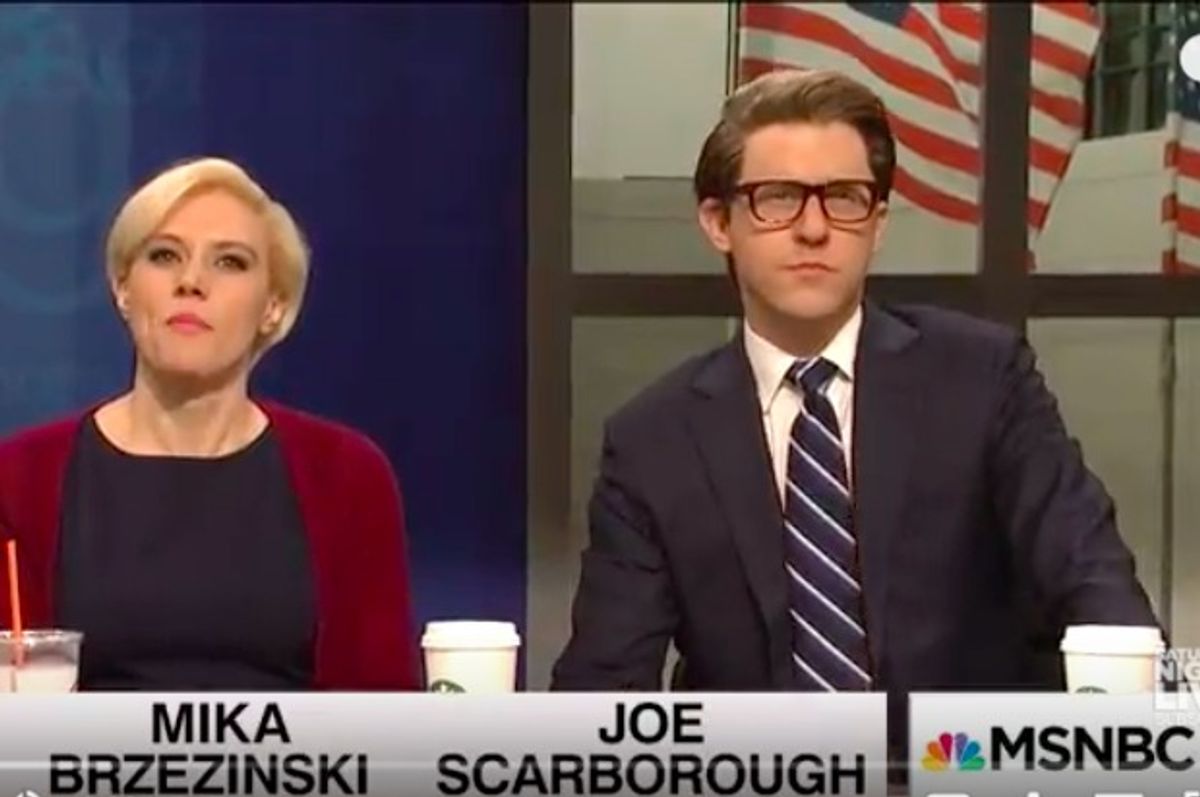 This week's “Saturday Night Live” opened with a cheeky parody of MSNBC’s “Morning Joe”, featuring Kate McKinnon as Mika Brzezinski and Alex Moffat as co-host Joe Scarborough. Just like the real show, the SNL version had a classic-rock open. The two hosts argued like an old couple, but couldn't keep their hands off each other. In real-life news, Scarborough and Brzezinski made headlines last week with the announcement that they’re getting married.

As "Mika" talked about the health care bill and the Republicans' flaws, "Joe" began to wax flirty. “Oh, Mika," he purred. "That’s enough, ok, you’re being sickening because you know it…pushes…my…buttons…”

Soon, the hosts took a call from "President Donald Trump" (played by Alec Baldwin) pretending to be his own White House publicist “John Miller". In 1991, the real Donald Trump famously did a strange interview with the Washington Post, during which he actually pretended to be his own publicist.

“Hello, Joe, Mika, this is John Miller,” Baldwin said as Trump. “I’m sort of new here.” He went out to talk about the Republican's party following Friday's Congressional vote in favor of the Obamacare replacement bill.

“I am just celebrating the fantastic success we in Congress yesterday with the new healthcare law," said "Miller".
"After Congress voted, we had a party, there was beer,” he said. “The disaster that is Obamacare has finally been repealed.”

“Hold on, sir, it’s not repealed yet,” Scarborough said. “It still has to pass the Senate.”

“What, now?” Miller asked. Scarborough broke it down for "Trump". “The bill goes through the Senate. They might even rewrite the entire thing if they pass it at all."

“But…there was beer,” a confused Trump as Miller said. Brzezinski went on to explain anew that the bill had a long way to go before it was law, after which "Miller" hastily hung up.