Is the Muslim world divided over an ancient sectarian conflict? Not really: It's 21st-century power politics 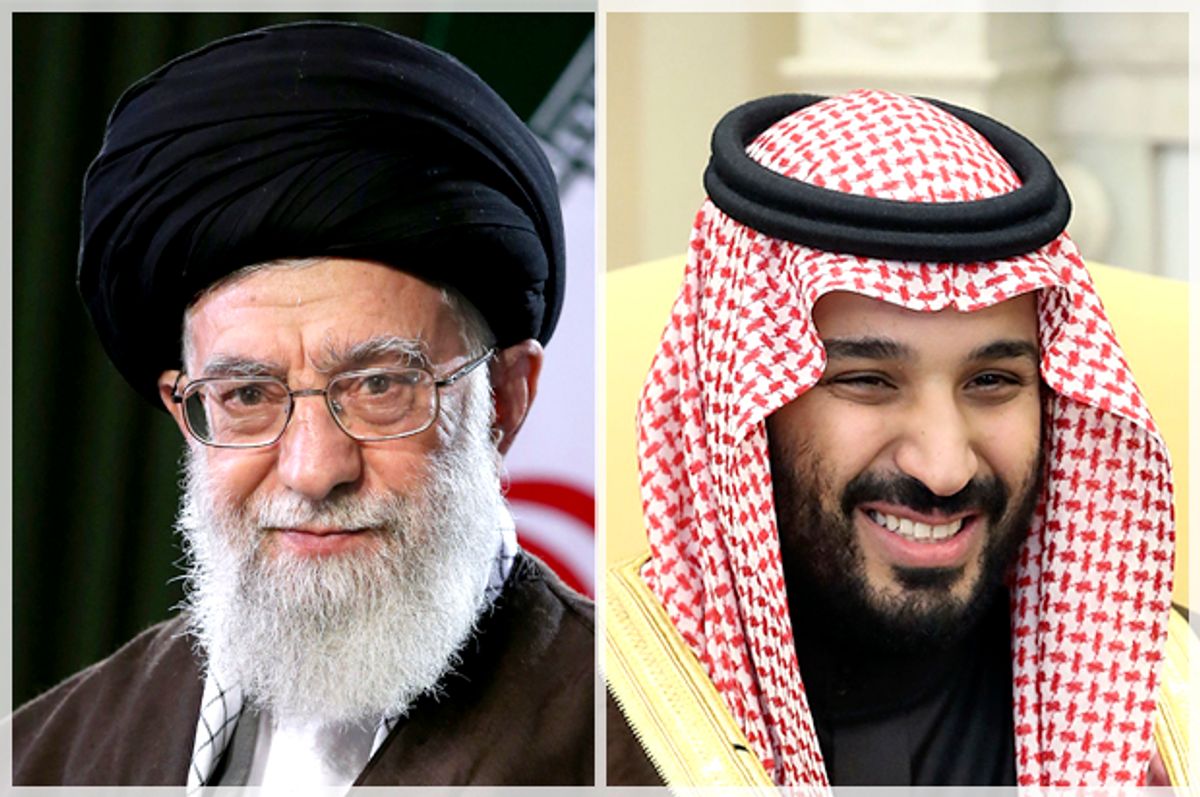 Last Tuesday, Saudi Arabia’s minister of defense and deputy crown prince, Mohammed bin Salman, declared that the improvement of his country’s relations with Iran was impossible with this startling query: “How do you have a dialogue with a regime built on an extremist ideology … that they must control the land of Muslims and spread their Twelver Jaafari sect in the Muslim world?” The reference to the “Twelver Jaafari sect” was another way of saying “Shia,” the branch of Islam practiced in Iran.

With his rhetorical question, bin Salman, a son of the Saudi king, undermined what were vague signs of a possible thaw in the cold war between the two Persian Gulf powers. For the first time in two years, Iranians will be permitted to take part in the hajj, the pilgrimage to Mecca required of all Muslims. The Kuwaiti leadership — one of the Saudis’ junior partners in the Gulf Cooperation Council — has been working hard to relieve Riyadh-Tehran tension. It seems likely that the Kuwaiti emir was freelancing, however, and the presence of Iranians at the annual pilgrimage is notable only because 500 of them died in a stampede during this Muslim rite in 2015.

There does not seem to be an end in sight to the conflict between the Saudis and Iranians, although both sides have studiously avoided firing shots at each other and it largely continues at the expense of Yemeni blood. There was nothing all that surprising about bin Salman’s statement, though. The exercise of Iranian power in the region is the paramount concern for the five or so people who run Saudi Arabia. It is also was no surprise that the deputy crown prince framed the conflict in expressly sectarian terms. The problem is that the rest of the world has accepted, even internalized, this view, which plays right into the hands of the Saudis and other regional authoritarians.

Over the last decade at least, the so-called Sunni-Shia divide has been a defining characteristic of the Middle East for pundits and other non-expert observers of the region. The idea is appealing in two important respects. To some, it must sound extremely cool and learned to say or write things like, “the great schism occurred in a defining battle on the Karbala plain in 680 A.D.,” but that's actually closer to discredited and ignorant Trump aide Sebastian Gorka than Ernest Gellner. Sure, it was in 680 A.D. that the roots of Shia Islam took hold, when the forces of the Umayyad caliph killed Husayn ibn Ali, the grandson of the Prophet Muhammad and the son of Ali ibn Abi Talib. But this event does not or should not imply that adherents of the two major sects of Islam are fated to be at war with each other. That's precisely what the endless harping on the Sunni-Shia split suggests, however.

This leads seamlessly to the second reason why this notion has so much power and influence in the American discourse about the Middle East. If there is a conflict between Sunnis and Shias, and if it is believed to be primordial in nature, then the United States does not and should not have anything to do with it. And if it is indeed one of the “conflicts that date back millennia” — to use the words of former President Barack Obama — then Washington cannot do much about the violence and instability currently buffeting the Middle East.

It's not that easy, though. Baghdad, for example, was never the multicultural, multi-faith Garden of Eden that some opponents of the invasion of Iraq may have imagined. But it was not a city that required blast walls and other barriers to protect Sunnis and Shias from each other. Among the many unintended consequences of Operation Iraqi Freedom was to highlight and harden differences within Iraqi society that were sectarian but not intrinsically about religion. Rather they were about politics, which is the competition over the control and distribution of resources.

Iraqi strongman Saddam Hussein was a Sunni, as were all the people who dominated Iraqi political life at the expense of the Shia majority. After the invasion, those who came to power in Iraq were Shia, thereby undermining the status of the previous Sunni political and social elites who were determined to protect their interests in a post-Saddam Iraq. Some of them sought to do so violently.

When it came to establishing new political order, Americans helped create a system of ethnic and religious spoils that they hoped would maintain social peace. It did not work out that way, as different groups and factions fought over who gets what in the new Iraq. What does any of this have to do with ancient battles among rival groups of Muslims over power near Karbala? Nothing. It is about political power in the 21st century. Maybe there is nothing that the United States can do to resolve the political struggle in Iraq. It is also possible that there is a way forward, but American insistence on seeing Iraq’s challenges largely in sectarian terms makes it a lot harder to think creatively about solutions.

The other problem with accepting the Sunni-Shia-divide-is-the-problem meme is its implicit assent to the worldview of regional authoritarians who use the idea for their own political purposes. More than a decade ago, Jordan’s King Abdullah II warned of the emergence of a “Shia Crescent” that would threaten the stability of the region. Egypt’s then-president, Hosni Mubarak, picked up on the idea and raised similar concerns. More recently, the Saudis have taken matters into their own hands to undermine the axis of Shia that Riyadh perceives as a unique threat to its security. The Saudis dispatched 1,200 troops to Bahrain in 2011 to help put down an uprising against the ruling Al Khalifa family that the Saudis believed was the work of agents operating on behalf of Iran. It has more recently waged an unwinnable war in Yemen on the premise that Tehran was directing a Yemeni branch of some type of Shia Internationale to undermine the government of Abd-Rabbo Mansour Hadi.

It is clear that Iran is seeking to extend and reinforce its influence around the Middle East, but what the Saudis have convinced themselves and us is that what they are confronting is connected to the 7th-century Battle of Karbala rather than modern-day power politics. Even before the Islamic Revolution, Iran sought a greater role in regional affairs commensurate with what its leaders regarded as the country’s Middle Kingdom–like status. Unlike the shah, Supreme Leader Ayatollah Ali Khamenei enjoys a more favorable regional political environment to try to achieve these long-held goals, thanks in large part to the instability the United States wrought in Iraq and the failure of the uprisings in Syria and Yemen.

It is, of course, reasonable to ask, so what? What difference does it make if the conflict is sectarian or the result of regional political rivalries? To which one might answer that Iran is a revolutionary power that poses a threat to American interests and Washington’s regional allies. That is true, but it does matter how the conflict is defined. No doubt the Iranians are bad actors and the stakes in the Saudi-Iranian regional rivalry are high. When those stakes are expressed in terms of power politics, it seems the chances of de-escalating the conflict are greater than if the struggle is framed around identity. Mohammed bin Salman's statement about Iran makes that clear. Americans should be wary of this rhetoric. After all, the implication of the deputy crown prince’s statement is either endless conflict or regime change. Haven’t we had quite enough of that in the Middle East?