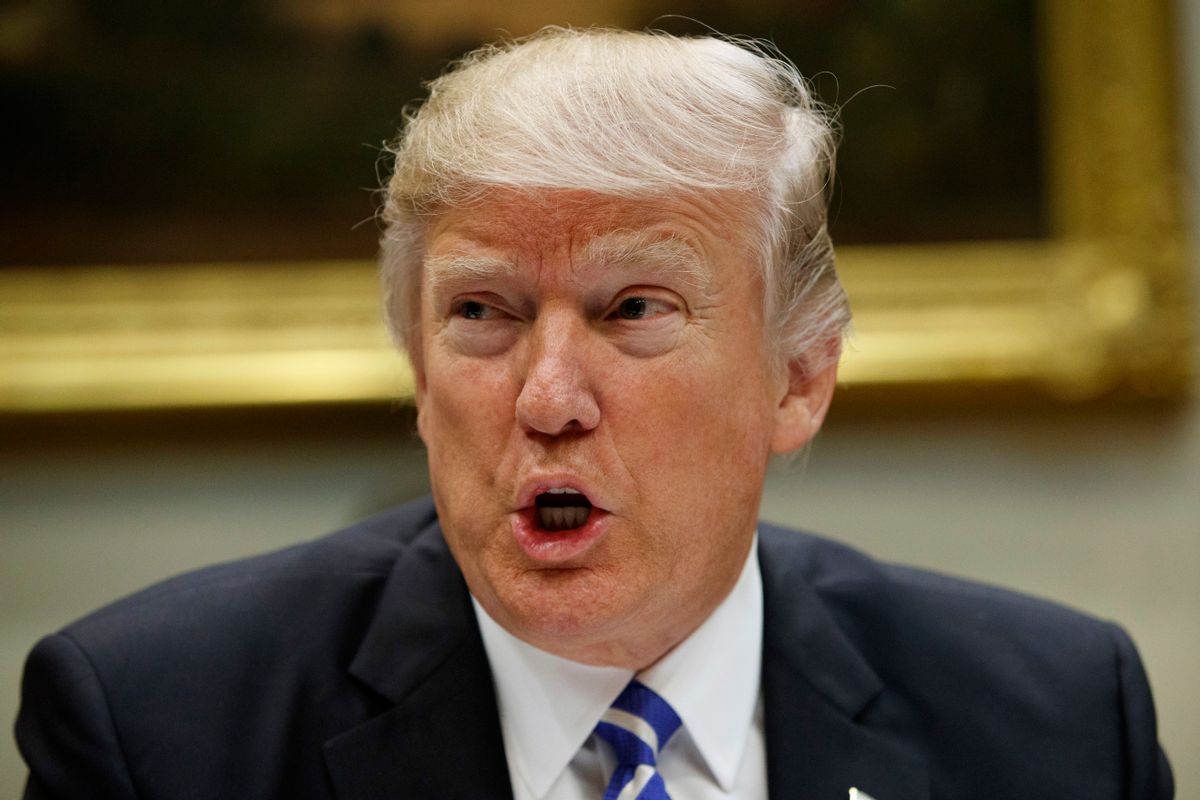 Someone apparently affiliated with President Donald Trump appears to have removed a controversial call for a "complete shutdown of Muslims entering the United States" from his campaign website after White House press secretary Sean Spicer was asked about it during his daily news briefing on Monday.

Several times during his successful 2016 presidential bid, Trump pledged that he was going to implement a "Muslim ban" on foreigners of the Islamic faith from entering the United States. Since Trump has assumed office, however, he and his allies have tried to couch their desires in more religiously neutral language, as several federal judges who have reviewed the executive orders implementing Trump's euphemistically relabeled "extreme vetting" policy have remained unpersuaded.

On Monday, Spicer was asked by ABC News reporter Cecilia Vega why the president's campaign website was still calling for "preventing Muslim immigration."

Spicer responded that he had not seen what was on Trump's website.

“I’m not aware of what’s on the campaign’s website,” Spicer said. “You’d have to ask them. I know how we’ve talked about this from the first day of this administration as a travel ban…It was something the president made very clear in the filings, why he did it, the motives. There really shouldn’t be any question to why the president’s doing this.”

Within minutes of Spicer's grilling, the text of the December 7, 2015, statement was removed from DonaldJTrump.com. The original document can be retrieved in the Google cache of the page. It reads in full:

(New York, NY) December 7th, 2015, -- Donald J. Trump is calling for a total and complete shutdown of Muslims entering the United States until our country's representatives can figure out what is going on. According to Pew Research, among others, there is great hatred towards Americans by large segments of the Muslim population. Most recently, a poll from the Center for Security Policy released data showing "25% of those polled agreed that violence against Americans here in the United States is justified as a part of the global jihad" and 51% of those polled, "agreed that Muslims in America should have the choice of being governed according to Shariah." Shariah authorizes such atrocities as murder against non-believers who won't convert, beheadings and more unthinkable acts that pose great harm to Americans, especially women.

Mr. Trump stated, "Without looking at the various polling data, it is obvious to anybody the hatred is beyond comprehension. Where this hatred comes from and why we will have to determine. Until we are able to determine and understand this problem and the dangerous threat it poses, our country cannot be the victims of horrendous attacks by people that believe only in Jihad, and have no sense of reason or respect for human life. If I win the election for President, we are going to Make America Great Again." - Donald J. Trump

The administration's attempts to restrict immigration from some Muslim countries also came up in a Senate hearing today which featured former acting attorney general Sally Yates. She was terminated early by the Trump White House after she refused to defend the immigration restriction.

Yates was asked about the incident by Texas Sen. John Cornyn. She replied that her refusal to defend the executive order was an example of her promise during her confirmation hearing to oppose a presidential action which she deemed to be unlawful or unconstitutional.

"And I looked at this. I made a determination that I believed it was unlawful," Yates said. "I also thought it was inconsistent with principles of the Department of Justice."

Cornyn then asked Yates if she believed she had the authority to overrule the White House Counsel's Office which had said the "Muslim ban" was constitutional.

Yates replied back in a snap: "Well, I was the attorney general of the United States."