Her win was a beautiful moment at the MTV movie awards, but could it be a net loss for female actors? 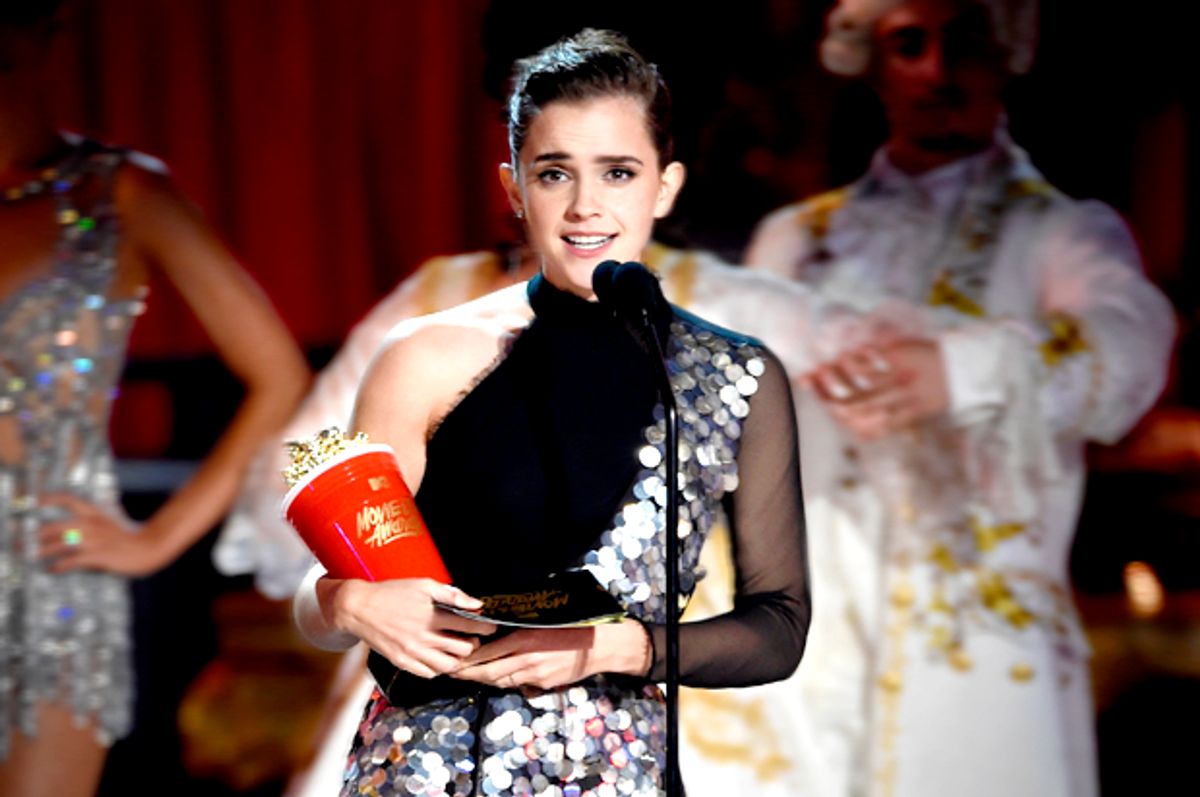 At the 2017 MTV Movie & TV Awards on Sunday night, statuettes were handed out for “Best Kiss,” “Best Villain” and “Best American Story." The evening’s big winner, though, was gender-neutral awarding.

The network gave its best actor in a film prize to Emma Watson for her role in the live-action “Beauty in the Beast” and the best actor in a TV series award to Millie Bobby Brown, the supernaturally gifted 13-year-old at the center of Netflix’s “Stranger Things.”

Watson treated the award as an honor and a milestone. "MTV's move to create a genderless award for acting will mean something different to everyone,” Watson said. "But to me it indicates that acting is about the ability to put yourself in someone else's shoes and that doesn't need to be separated into two different categories.”

Both Brown and Watson beat out a slate of male and female performers in their respective categories.

It's not the first time that MTV has removed the question of gender from its awards, having done so in 2005 and 2006. Last night's awards, however, gained more attention due in part to the recipients. Both have been outspoken on a number of issues ranging from feminism to LGBT acceptance — and due to advance publicity by the network. Last month MTV President Chris McCarthy told the press, “This audience actually doesn’t see male-female dividing lines, so we said, ‘Let’s take that down.’”

It's a graceful solution to a spate of recent problems arising from traditional binary awarding. Last year Showtime submitted “Billions” actor Asia Kate Dillon, who identifies as gender nonbinary, for an Emmy. The resulting confusion — both at the Television Academy and at the network — prompted Dillon to write a letter to the academy.

“I’d like to know if in your eyes ‘actor’ and ‘actress’ denote anatomy or identity and why it is necessary to denote either in the first place?” Dillon wrote. “The reason I’m hoping to engage you in a conversation about this is because if the categories of ‘actor’ and ‘actress’ are in fact supposed to represent ‘best performance by a person who identifies as a woman’ and ‘best performance by a person who identifies as a man’ then there is no room for my identity within that award system binary.” Without gender specification in its awards, it appears that MTV has indeed created space for actors like Dillon.

On social media, the move was celebrated by liberals and, of course, lamented by conservatives. But beyond grabbing headlines, filling social-media streams and giving audiences a honestly wonderful moment, can we see MTV’s recategorization as a harbinger of things to come? Or is it an isolated instance playing out on a fringe awards show?

The answer depends on the big traditionalist awards shows — the Emmys, Grammys, Oscars and Tonys — which already tend to revolve around industry conservatism. The recent wins pinned to "Moonlight" notwithstanding, women, LGBT individuals and ethnic minorities often go underrepresented, freshness is underappreciated and the values stressed are, simply put, retrograde.

As a result of progressive pressure, the people behind these shows have made efforts to get with the times recently. The Grammy Awards, for instance, created new categories (such as "best urban contemporary album") to better reflect the sound of popular music and foster diversity. And the Academy of Motion Picture Arts and Sciences that awards the Oscars revamped its voting body following a sustained campaign of criticism (#OscarsSoWhite) last year. Now that MTV has reintroduced gender-neutral categories, it’s conceivable that fans will pressure other awards shows to do the same.

And yet, there's a risk here. A study by the Center for the Study of Women in Television and Film at San Diego State University found that as recently as 2014, only 12 percent of protagonists and 30 percent of all speaking characters in the top-grossing films were female. Women can act just as well as men, full stop. But when gendered divisions are eliminated in the case of film and television performances, women find themselves at an unfair and institutional odds disadvantage; there are simply more male performances to choose from.

Both Watson are Brown are more than deserving and MTV is laudable for its efforts to bring men and women into parity through nongendered awards. Yet, the course ahead requires — as others have said — the creation of a level playing field. Without that, removing gender from awards could mean removing women from the podium. As welcome as MTV's move is, the focus should remain on the hard, long-term work of creating equal opportunities first.

As well, one could imagine bigger awards shows adding instead of subtracting categories — so that there would be awards for men and women as well as for people who are non-identifying and of the various genders that lie in between. Certainly, acknowledging gender-neutral actors does not require forgetting gender. And, who knows, creating an additional category might just inspire Hollywood to cast more actors capable of filling that category.