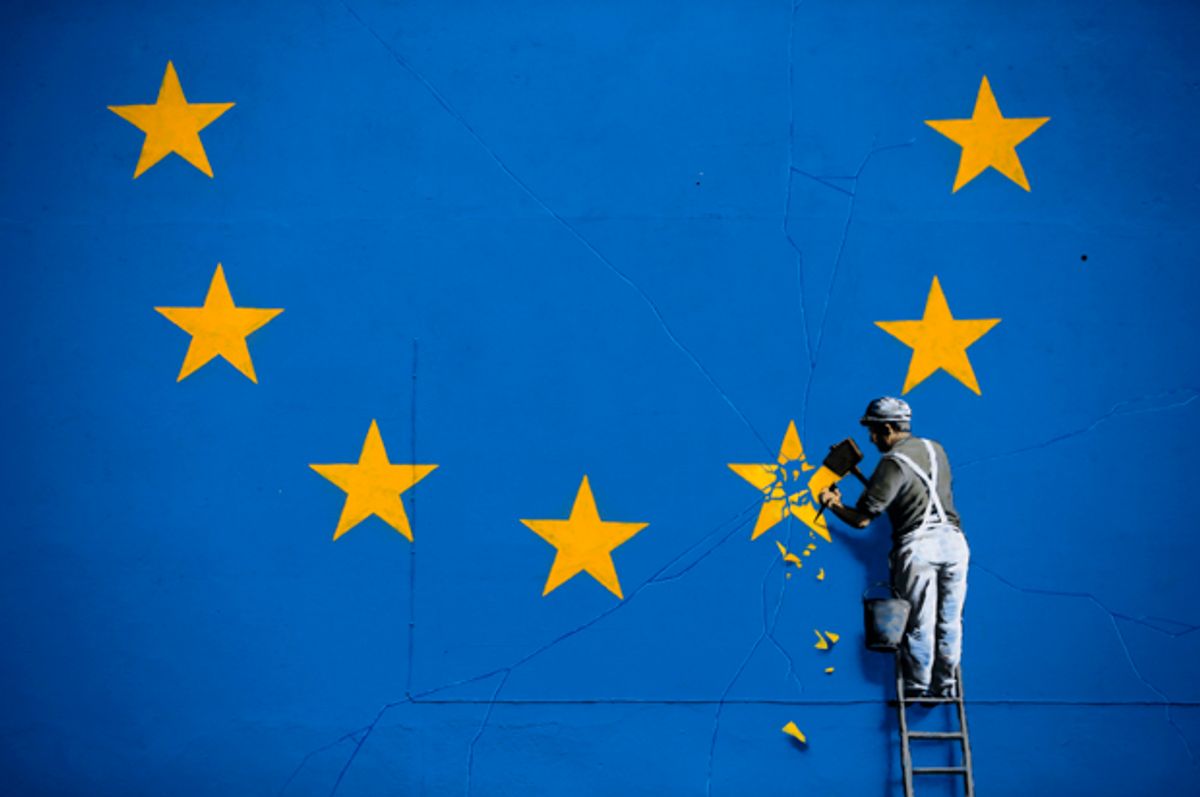 The European Union flag is a simple design. Adopted in 1955, the circle of a dozen five-point yellow stars over a field of blue symbolizes the European unity.

Now, nearly a year after British voters decided to disrupt this comity by voting to leave the union, Britain’s most famous street artist has produced what may be the largest editorial cartoon about the so-called Brexit.

Banksy, the anonymous graffiti king knows for his subversive, darkly humorous, and valuable works of stencil art, was busy over the weekend in Dover, England, just steps from the ferry terminal that delivers passengers to and from continental Europe.

The image, plastered on the side of a multistory building of the seaside town, depicts a worker standing on a ladder as he chips away at one of the gold stars of a giant, cracked E.U. flag. Banksy laid claim to the work Sunday on his Instagram feed.

The statement comes amid increasingly strained talks between British Prime Minister Theresa May and Brussels over the terms of Britain’s E.U. exit. Last week, Donald Tusk, European council president, urged May to show constraint after she accused Brussels of trying to meddle in Britain’s June 8 snap general election.

May has accused the European Commission of hardening its stance on exit negotiations in order to influence the vote. London and Brussels must work out how to organize an orderly departure in areas such as trade, immigration and judicial framework.

It’s almost certain the E.U. flag won’t be altered to reflect the Brexit.

The 12 stars, known as the Stars of Unity, arranged like the numbers on a 12-hour-clock face, were never meant to represent the number of E.U. countries. The flag was originally going to include 15 stars to represent the number of original members of the Council of Europe, an international organization aimed at promoting international human rights and European culture. But members later agreed to keep the stars at a neat circle of 12 regardless of how many states join or leave the union. Today, the E.U. is made up of 28 states.