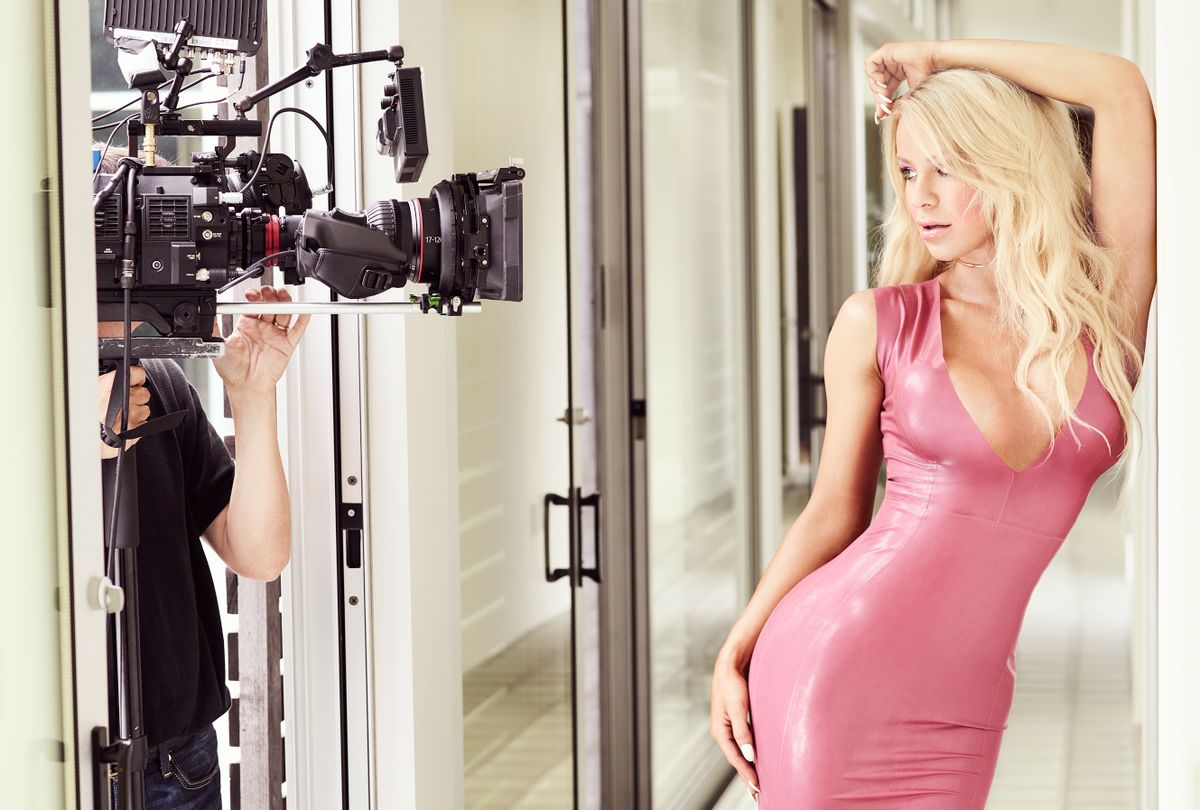 Moments after meeting Barbara Kopple, I feel like I have known her my whole life. But maybe she just has that effect on people. As she enters Crosby Bar, an elegant lounge inside the Crosby Street Hotel where we’re meeting for breakfast, bringing to mind a moment from her 1974 Oscar-winning documentary “Harlan County, USA”: an older woman, addressing a large crowd of striking coal miners before singing, “Which side are you on?” It captures the essence of the whole film, which is, on some level, the essence of Kopple’s entire oeuvre, including her splashier celebrity profiles: the small steps, the big choices and the neglected narrative of kindness.

“This Is Everything: Gigi Gorgeous,” Kopple’s latest documentary about transgender YouTube megastar Gigi Gorgeous also occupies a stronghold in Kopple’s kindness pantheon. The film, produced by Gigi’s managers Adam Wescott and Scott Fisher for YouTube Red, is equal parts emotional journey and study of YouTube culture, at times elevating the platform to savior status. Yet, what is first obvious as Kopple and I embrace as though we are old friends then nestle into our banquette for breakfast, is Kopple’s genuine warmth and sincerity. Also her voice: It’s like Ann-Margret meets pre-cigarettes Oriana Fallaci.

“I love people,” Kopple tells me after ordering some scrambled eggs. “And Gigi’s a beautiful person. What’s even stronger is she wanted to be who she was. That’s who she is to me. No matter who bullies her. No matter what society thinks of her. In my films, I want to see who people are.”

Minutes into “This Is Everything,” it’s clear that Kopple loves people. At least she loves Gigi (born Gregory Lazzarato). Gigi’s spirit is sparkly, her heart is pure and her skin is flawless. Her connection to the camera is intimate yet controlled.

“My camera became my therapist and YouTube became my diary,” Gigi says. But it was the videos themselves, confessional yet upbeat, that forged such a deep bond between the subject and her following (2.5 million of them plus 2.3 million followers on Instagram), for whom Gigi’s channel provided both succor and balm against their feelings of isolation IRL. This connection is evident at all of her public appearances where she is mobbed by weeping fans. “I’m having a religious experience,” one tells her.

Since “This Is Everything” proceeds chronologically, we get to go on Gigi’s transition journey with her. We see Gigi first as Greg the champion diver. We watch as Gigi (then still Gregory Gorgeous) doing makeup tutorials on YouTube. When Gigi’s mother passed away from cancer in 2012, Gigi-then-Gregory decided, “Life was short. I knew right then and there that I wanted to be a girl.” The vlogs grow more personal, documenting Gigi’s transition. Her look, graduates from high femme to higher femme to extremely high femme née pre-Kanye Kardashian. (In homage to those great icons of subtlety, Kylie herself is even featured in some of the footage.) We also witness two somewhat harrowing surgeries: a facial feminization surgery and a boob job.

Throughout the film, Kopple remains a raconteur of the soul. A gifted documentarian with an almost uncanny ability to turn any subject into a spellbinding story — from labor disputes (“Harlan County, USA” and “American Dream,” both Oscar winners) to celebrity portraits such as “Shut Up and Sing” and “Miss Sharon Jones!” — she neither shies away from controversy nor abuses its obvious narrative allure, instead allowing an honest, intimate and innately human narrative to unfold.

With “This Is Everything: Gigi Gorgeous,” Kopple takes the challenge of “Running from Crazy,” her 2013 film about Mariel Hemingway’s attempt to escape the Hemingway suicide gene, and yet again reinvents the wheel. While “Running from Crazy,” also re-examined and reified pre-existing footage, with “This Is Everything,” Kopple has SO MUCH footage from Gigi’s home movies and her video archives from her channel, that it becomes almost an exercise in what not to show on film. It almost begs the question, if you live your life on YouTube, is the most interesting thing about you what you leave out? Is this, in fact, everything?

Suddenly, the expert documentarian is tasked with documenting someone whose life is to document herself. (Someone should have shot THAT documentary.) Regardless, the result is a moving testimony to the power of love and acceptance in a world driven by likes. The most poignant parts of the film may be when Gigi’s father, David, a lugubrious, droopy-eyed guy, nurses Gigi after her surgeries or when he admits, “Having Greg happy is way more important than me having old Greg.”

True, Gigi’s not running to jump on any political bandwagon, but her genuine affection for her fans or anyone going through any kind of personal struggle is always evident. Her wisdom might be simple but it hits home. Use liquid eyeliner. Don’t take shit from bullies. Be yourself. She comes out twice in the film, once as gay and then as transgender and both on YouTube which is, in itself, a form of activism. (Later dating girlfriend Nats Getty, she will come out a third time on YouTube as a lesbian.)

“I never had a problem speaking personally about myself and the world,” Gigi tells me. “I wasn’t thinking when I was just filming. A lot of time I was like, let’s film it and put it online. Gradually I was given a voice for the LGBTQ community, but at the end of the day, I always like to keep it fun.”

“She’s an activist and she’s not an activist,” Kopple says. “On another level, Gigi was ahead of her time with the whole bathroom issue and said it organically. She said it as part of her life. She just said, ‘Nobody will look at me if I go into the woman’s bathroom.’ She was 14 or 15. She said, ‘Take me to jail. Handcuff me for using the wrong bathroom.’ It’s great for certain people to hear because it wasn’t political.”

“I’ve been given this voice; this is powerful and amazing,” Gigi says. “But I like to spread love and give advice and speak to people and speak to what they’re going through and what I’m going through. Like my coming-out video on YouTube as a lesbian. It was a shock to some people because I had not been online identifying as that. But it’s been received well, which has been a pleasant surprise. It was shocking to me too, but in a good way.”

Gigi’s schtick is making the insurmountable seem surmountable and looking glam AF doing it, like sky diving or triumphing over internet bullies. On some level, this schtick dovetails with Kopple’s leitmotif of love conquers all, people — not to mention love conquers all people. Nowhere is this notion more evident than in “This Is Everything.” But I wonder, What would the coals miners of “Harlan County, USA,” think about Gigi? Would they accept her? How can you reconcile these two increasingly polarized narratives in the current fight for social justice?

“The miners probably voted for Trump,” Kopple admits, sadly spooning her eggs. Her expression alternates between sorrow and resignation. I take a sip of coffee. “But they were originally activists and progressives. They took me into their homes and fed me and we sang songs. Now it’s a new generation of these people who don’t have jobs. There used to be 150,000 united mine workers; now there’s less than 25,000 and they feel betrayed because they didn’t get what they thought they would."

She continues, "But I think that if they saw ‘This Is Everything’ in the right context and we had a discussion afterwards, maybe I could show them something, because they are loving, good people and Gigi’s so kind. Of course, some people are so walled off because of their background or religion and that’s hard to take away.”

A few weeks after “This Is Everything” opened, Gigi lands a cosmetics deal with Revlon, becoming the brand’s first transgender celebrity ambassador. The campaign includes three other social media influencers, Kandee Johnson, Sabrina Carpenter and Etienne Ortega. Kopple isn’t surprised. “YouTube has less of a barrier between product and star and so there’s a level of engagement and honesty,” Kopple tells me. “It’s more real. This isn’t Jennifer Anniston talking about Pantene. It’s actually someone using the stuff in their actual house. Gigi is honest and real and speaking from her heart.”

Later, I go home and watch one of Gigi’s makeup videos. In the video, she teaches you how to put on “simple” eye and lip with Revlon products. Afterward, I read through something she said when I asked her if she thought of herself as an icon.

“You know, role model and icon are strong words," she says. "I’m really happy about the Revlon deal. A huge mainstream brand acknowledges a trans person! It reminds me of the deal I did with Crest and I don’t take it lightly. I hope I can use my platform to send a good message. I’m blessed that I’ve been given a voice.”

With Gigi’s wisdom in mind, I resolve to buy Revlon liquid eyeliner and put my best face forward.