A sham presidency's legacy: What will be the defining image of the Trump administration?

Donald Trump is master of perception, altering reality to distract the public from his lack of character. 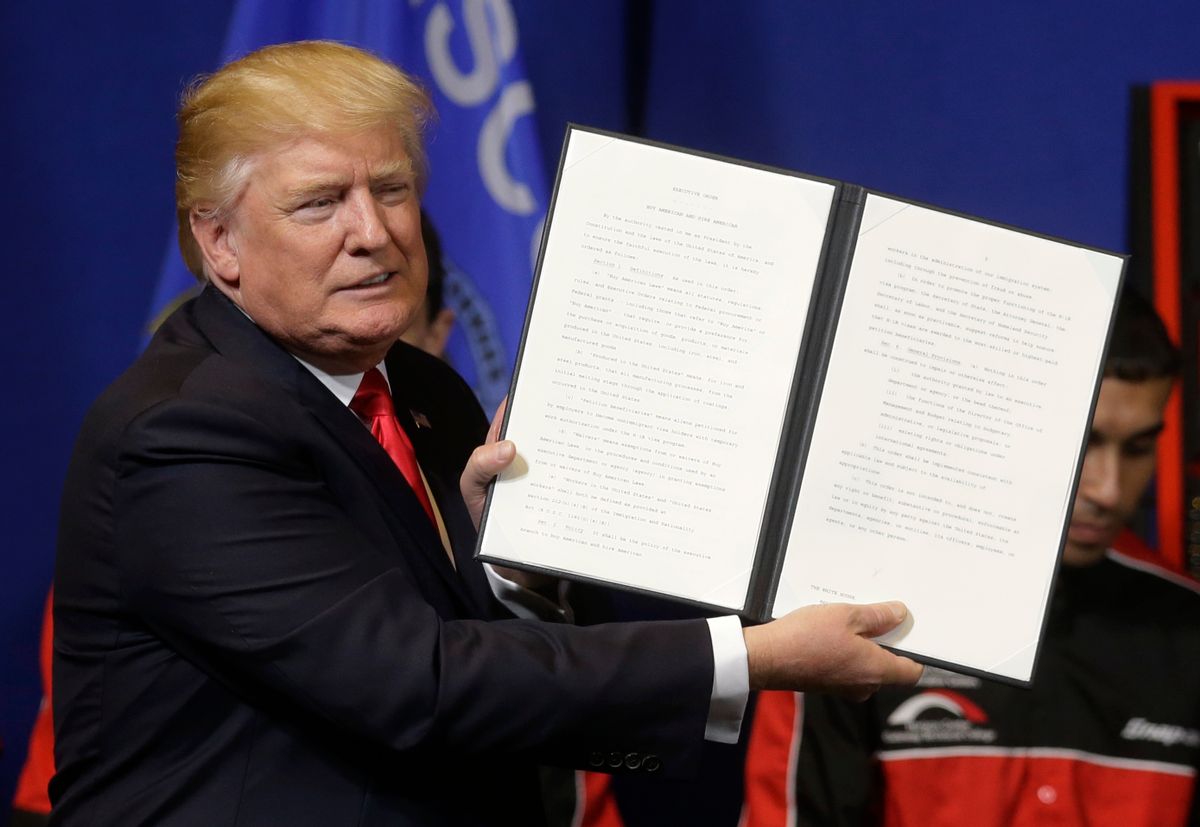 Presidencies are often defined by images: FDR delivering his reassuring fireside chats; Harry Truman speaking from the back of his campaign train, whistle stopping in 1948 and giving ‘em hell; JFK and Jackie, elegant in Paris, defying Henry James’ stereotype of Americans as bumpkins; Reagan at the Berlin Wall; and George W. Bush in his flight suit against the banner reading “Mission Accomplished.”

And then there is Donald Trump. To me, the defining image of Trump’s presidency so far may not be his Mussolini-like pose of narrowed eyes, wrinkled brow and jutting jaw that is supposed to strike fear in our hearts, but his brandishing of his executive orders, holding them up like a 3-year-old showing off a finger painting. See what I’ve done! I’m so proud of myself!

This image is defining not because of the nauseating display of ego in a 70-year-old man, though there is that, but because of the emptiness of the gesture. Make no mistake. Some of these executive orders have done real damage, especially those affecting the environment and workers’ rights.

But many of them, according to an Associated Press report, are little more than grandiose press releases, which takes us straight to the empty heart of this administration. Trump could care less about the substance of his executive orders. The pompous flourish with which he promotes them, like nearly everything this president does, is an effort to create the perception of action when the reality is anything but. It is largely for show.

Astute political practitioners — FDR, JFK and Reagan among them — understood that there’s an aesthetics of politics: a way to showcase your policies to maximum effect. But until now, I don’t think any president had ever practiced a politics of aesthetics where the aesthetics don’t serve politics but the politics operate as window-dressing to serve the aesthetics. Now one does. To an inordinate degree, Trump’s is a perceptual presidency — a con, a grift, a sham in which appearances are just about everything, and in which policies themselves are subordinate to the perception of presidential action.

Putting style over substance had been the hallmark of Donald Trump’s pre-political career. He has always been the Great Pretender. He pretended to be a real estate mogul, reshaping the face of New York, when he was basically franchising his name to real builders so they could slap the brand on their buildings. He pretended to be a shrewd businessman when he drove his Atlantic City casinos into bankruptcy.

He pretended to be a multi-multi-billionaire, when reports suggest that his wealth is nowhere near as large as his boasts. He pretended to have one of the highest-rated shows on television, when it was rated in the top 10 only in its inaugural season and then steadily fell. He founded a university that pretended to let people in on his get-rich-quick secrets, but he was putting his name on what turned out to be a fleecing operation.

In short, he was as much a sham businessman as he is a sham president. His gift wasn’t business acumen but image acumen — creating an alternative reality not unlike alternative facts.

One could easily understand the purpose of that in the business world where there seem to be a lot of suckers waiting to be taken. But many of us wondered why he would pursue the presidency, and if he really wanted it just to polish his brand. As his campaign wore on, I thought of him as the Max Bialystock of politics. Bialystock was the swindler of Mel Brooks’ The Producers, who staged the train wreck musical, “Springtime for Hitler,” knowing it would bomb so he could then pocket the investors’ money.

Trump’s campaign was the political equivalent of “Springtime for Hitler” — a total mess — but like Bialystock, he wound up succeeding in spite of himself. He was stuck with the presidency, and we were stuck with him.

However, that might be selling him short. Even though Trump and his family have turned the presidency into their own personal ATM, I have come to reconsider whether Trump’s motives were primarily about the lucre. Rather, I think the lucre was a means to an end: puffing his ego.

The perception of wealth bought him the perception of importance for a man of obvious insecurity. It funded the Trump Show. It made him a star, even though one is hard pressed to say why he is a star. Or put another way, the presidency of the empty gesture was preceded by the empty life. Seen that way, the presidency was just a bigger stage — a bigger game of dress-up. All he had to do was make bold pronouncements and wave those executive orders, and he would be perceived as a big shot, the Leader of the Western World.

This, alas, was always hiding in plain sight. Just as Trump wasn’t shy about bragging how he stiffed subcontractors, skipped out on loans and gamed the IRS, he wasn’t shy about bragging how he turned perception into reality. “When I build something for somebody, I always add $50 million or $60 million onto the price,” he once said. “My guys come in, they say it’s going to cost $75 million. I say it’s going to cost $125 million, and I build it for $100 million. Basically, I did a lousy job. But they think I did a great job.”

And since the apple doesn’t fall far from the tree, John Oliver quoted the audiobook version of Ivanka Trump’s own discourse on the subject: “Perception is more important than reality,” she reads. “If someone perceives something to be true, it is more important than if it is true. This doesn’t mean you should be duplicitous or deceitful, but don’t go out of your way to correct a false assumption if it plays to your advantage.”

In other words, it is perfectly OK to play someone for a fool… or an entire country for a bunch of fools.

But Trump isn’t just a purveyor of perception. He is also its captive because he has no reference beyond it. When he mocked a handicapped reporter, we thought it was yet another manifestation of Trump’s cruelty, which it was, but it may also have been a manifestation of his aesthetics and of a belief in eugenics nurtured by his father. Similarly, when he insulted women and harped on their looks, we thought it was ugly misogyny and sexism, which it was, but it may also have been another demonstration of his obsession with appearances. It may explain as well why he is so disdainful of facts. If you live a life without meaning or substance, appearance is the only thing that matters. Indeed, the only question he ever seems to ask himself is: How does he/she/it look?

In this, unfortunately, Trump may be a man of his times. Even more than his faux populism, his bigotry and his proud political incorrectness, Trump’s obsession with appearances may connect him to a vast swath of America. Ours is a perception-heavy country. So much of our culture and of our lives now are dedicated to the sort of image-making in which Trump always has specialized — from the clothes we wear to the cars we drive to TV shows we watch to the schools to which we send our children.

It is not that Trump is fooling us with this braggadocio and pretense at being a great president — at least not those who are not looking to be fooled. It is that we can appreciate the attempt because so many Americans are making similar attempts, and they know that creating perceptions is so much easier than achieving reality. It is an idea that is reinforced everywhere, even among political pundits who should know better. The press ridiculed Hillary Clinton for being policy-conscious. They preferred Trump’s performance.

The problem is that perception is not reality, no matter what Ivanka Trump thinks. Perception is still the perception of reality. Trump may have snookered the press into believing he was exercising strength by firing missiles at Syria, but nothing there seems to have changed. He may have snookered supporters by making a big show out of building a border wall, but no border wall is in the offing. And he may have snookered his own party by declaring he would repeal Obamacare because of his alleged deal-making capabilities, but Obamacare is still there. Big words. Big displays. And then… nothing, because the words and displays supplant action, and don’t prod it.

This isn’t to say that a sham presidency is a harmless one. Far from it. When you hollow out the presidency, when you create a vacuum to be filled by ego and performance. When the measure of everything is how it looks rather than how it affects people’s lives, you are asking for disaster, and we’ve got one.

A presidency without ballast is like a person without character or conviction. Both are worse than empty; they replace the gravity of reality with the weightlessness of perception. They denude everything of meaning, save the meaning of aesthetics, rob everything of value, save the value of appearance. What Trump has done, then, is to generate a metaphysics of appearance that endangers reality. It is action for action’s sake. If he’s harmful, and he is, it is not because he has any stake in doing harm but because he knows it is likely to get the biggest bang from his supporters and the most noise in the media.

Gertrude Stein may have said it best when she famously quipped, there is no there there. What better description of this perceptual presidency could there be?