WATCH: John Oliver blasts the FCC and makes a passionate plea for public to save net neutrality laws

"Sadly, it seems once more we the people must take this matter into our own hands" 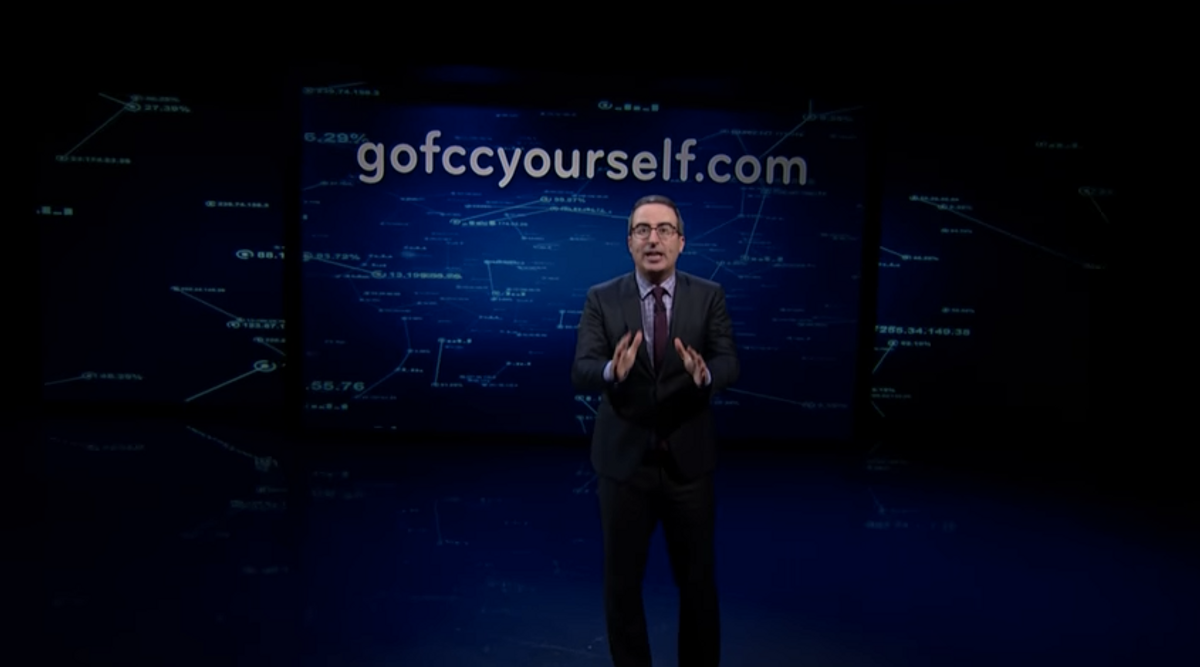 On Sunday's "Last Week Tonight" host John Oliver once again tackled the issue of net neutrality. The topic arises after recent remarks from the FCC Chairman Ajit Pai, appointed by President Trump, who indicated his intention to roll back laws that help keep the internet on a level playing field.

"Come on! The internet is an incredible place," Oliver exclaimed.

Oliver dedicated an episode to net neutrality in his first season, three years ago, when, at the time, the future of net neutrality was uncertain. The late-night comedian directed his viewers to leave their comments on the FCC website, which subsequently crashed.

Oliver discussed how Verizon and other telecom conglomerates are fighting to once again reclassify laws safeguarding the internet under Title I (their original classification before 2015) of the Communications Act of 1934 rather than the current method which is under Title 2 and allows for much stricter oversight. The late-night comedian then showed a video made by Verizon where employees called the proposed changes to net neutrality laws "a different legal footing" downplaying its detriments .

"So, when Verizon claims, Hey we love the open internet, but why don't we just put it on a different legal footing? It's basically O.J. Simpson asking why you won't let him hold any of your samurai swords," Oliver joked. "Come on Juice, you know why."

Oliver showed footage of Pai at a press conference, where the new FCC chairman was seen drinking out of an obnoxiously large coffee mug with the Reese's candy logo on it. "Yes Ajit Pai is the kind of guy who has a fun, oversized novelty mug — and he is really proud of it." Oliver said, before showing various instances where Pai touted his hilarious mug he has shown off to reporters and on his personal Twitter page.

"I love walking into my office, pouring a gallon of coffee into my infamous Reese's Peanut Butter Cups mug, and starting my day." Pai once said. Here is his self-proclaimed "infamous mug"

"Calling your mug infamous is like calling your Neti Pot a real panty-dropper," Oliver joked. "In not context, can that be remotely true."

But Oliver then hit on the important role Pai plays as FCC chairman, and how his prior history as a lawyer for Verizon shows whose side he may be on. The late-night comedian closed by once more making a passionate plea to "the internet, time-wasters and troublemakers" to speak out against the FCC's plans to kill net neutrality by leaving comments on their website expressing displeasure.

"Sadly, it seems once more we the people must take this matter into our own hands," Oliver said.

The process for leaving public comments has been made a bit more complicated, so Oliver purchased the domain gofccyourself.com which directs users to the FCC website and makes it much easier to leave comments. There have already been reports that Oliver was responsible for crashing the website, again.