Did Donald Trump try to threaten Sally Yates on Twitter? If so, he committed a felony

If Trump's tweet was meant to "influence, delay, or prevent" Yates' testimony, it could be felony witness tampering 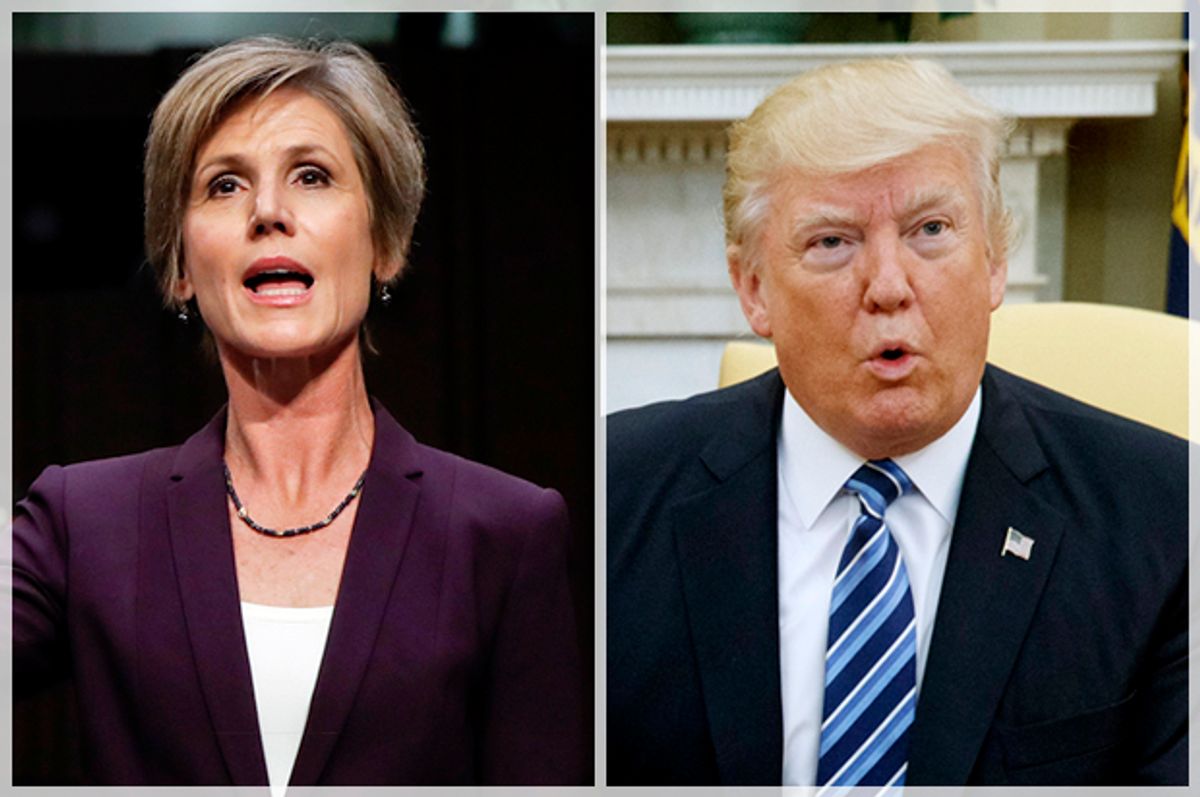 President Donald Trump refuses to publicly accept that Russia is engaged in an ongoing cyberwar against the United States. To this day, he continues to insist that such allegations are a Democratic Party scam to undermine his Electoral College victory in November. That’s all. This alone should be evidence enough that Trump is desperately attempting to cover up the attacks as well as his alleged involvement by shutting his eyes, plugging his ears and yelling, “Not happening! Not happening! La, la, la, la, la!”

The very fact that the president refuses to acknowledge even the aspects of the story that have nothing to do with him or his staffers, especially in the face of incontrovertible evidence that shows, at the very least, that Russia interfered in the campaign, gives us no choice but to presume that he’s up to something sinister on this front. Add to the mix the fact that every time Russia appears in the news, Trump starts flailing: He either struggles to change the subject, or he tweets something whiny about the “fake news,” or, as Rachel Maddow noticed recently, he simply ignores the question.

On Monday in the hours before former acting Attorney General Sally Yates’ testimony to the Senate Judiciary Subcommittee on Crime and Terrorism, the president engaged in a predictable tweetstorm, complete with an attack on the “fake news.” It’s entirely possible that one of those Monday-morning tweets constituted felonious witness tampering. Here’s the tweet in question:

Translation: That’s some really nice testimony ya got there, Yates: Shame if something were to happen to it. And by “it,” I mean “you.”

It’s important to note at the outset that this wasn’t the first version of this tweet. Indeed Trump tweeted a previous version in which he misspelled “counsel,” writing instead, “W.H. Council.” Fine, we all make mistakes (though he’s the president and we’re not). The problem here is that he once again violated the Presidential Records Act by deleting the misspelled tweet and replacing it with the corrected version. The deleted tweet should have been retained as an official record of the president’s public remarks, but he scrubbed it anyway.

This issue has popped up before. You might recall how the president of the United States needed four tries to correctly spell “hereby.” He deleted all of the misspelled tweets in that case. In the wake of another deletion incident, White House spokeswoman Kelly Love told CNN, "We have systems in place to capture all tweets and preserve them as presidential records; even if they have been deleted."

A system for capturing tweets? What system is that, exactly? Love didn’t elaborate.

In addition to possible violations of the Presidential Records Act, Trump’s tweet about Sally Yates is very likely witness tampering, a felony under Title 18 of the U.S. Code. Trump, via Twitter, was clearly attempting to mute Yates’ testimony by accusing her of leaking classified information about Michael Flynn, the former national security adviser. You remember the leaks, right? At the time, Trump called the leaks about Flynn’s nefarious contact with Russia's ambassador to the U.S., Sergey Kislyak, “absolutely real, but the news is fake.” We’re still deciphering that one, but he seemed to have verified that the leaks were accurate and not fabrications, which, in and of itself, should have triggered the appointment of a special prosecutor.

Nevertheless, Trump tried to intimidate Yates. Based on her testimony, it doesn’t appear to have worked. But he tried. Title 18, Chapter 73, Section 1512, Part (b) states quite clearly: “Whoever knowingly uses intimidation, threatens, or corruptly persuades another person, or attempts to do so, or engages in misleading conduct toward another person, with intent to influence, delay, or prevent the testimony of any person in an official proceeding . . . shall be fined under this title or imprisoned not more than 20 years, or both.”

That seems to accurately summarize Trump’s tweet, which was, to repeat, an obvious attempt to frighten Yates using a veiled threat of prosecution for the “real” leaks.

Charles J. Bowen, an attorney in Savannah, Georgia, agreed with a similar analysis by The Washington Post’s Seth Abramson, confirming that Trump’s intimidation of Yates prior to her official testimony was, in his opinion, witness tampering.

“What is particularly disturbing about this situation,” Bowen told Salon by direct message, “is that President Trump actually has the power and authority to direct the Department of Justice to conduct any investigation of his choosing. Given his history of temper tantrums and erratic behavior, it is easy to understand why Sally Yates would be justifiably nervous about such a not-so-veiled threat to prosecute her if she were to testify unfavorably.”

Set aside the disgusting lack of decorum on display by our cartoon dictator. His use of Twitter to sway the testimony of Yates needs to be added to the lengthy roster of possible criminal offenses in and around the Russian connection committed by Trump and his people. We’re only 110 days into the Trump presidency and he continues to scramble the effort to uncover Russia’s attacks on our nation's sovereignty. Imagine what it will be like when the allegations actually reach his desk. Come to think of it, Trump doesn’t have to be nailed on charges he colluded with Russia. It looks increasingly likely that he’s trampling all over the rule of law simply in the process of covering it up.