Fight for the future: Resisting Trump and the right with neoliberal compromise is not good enough 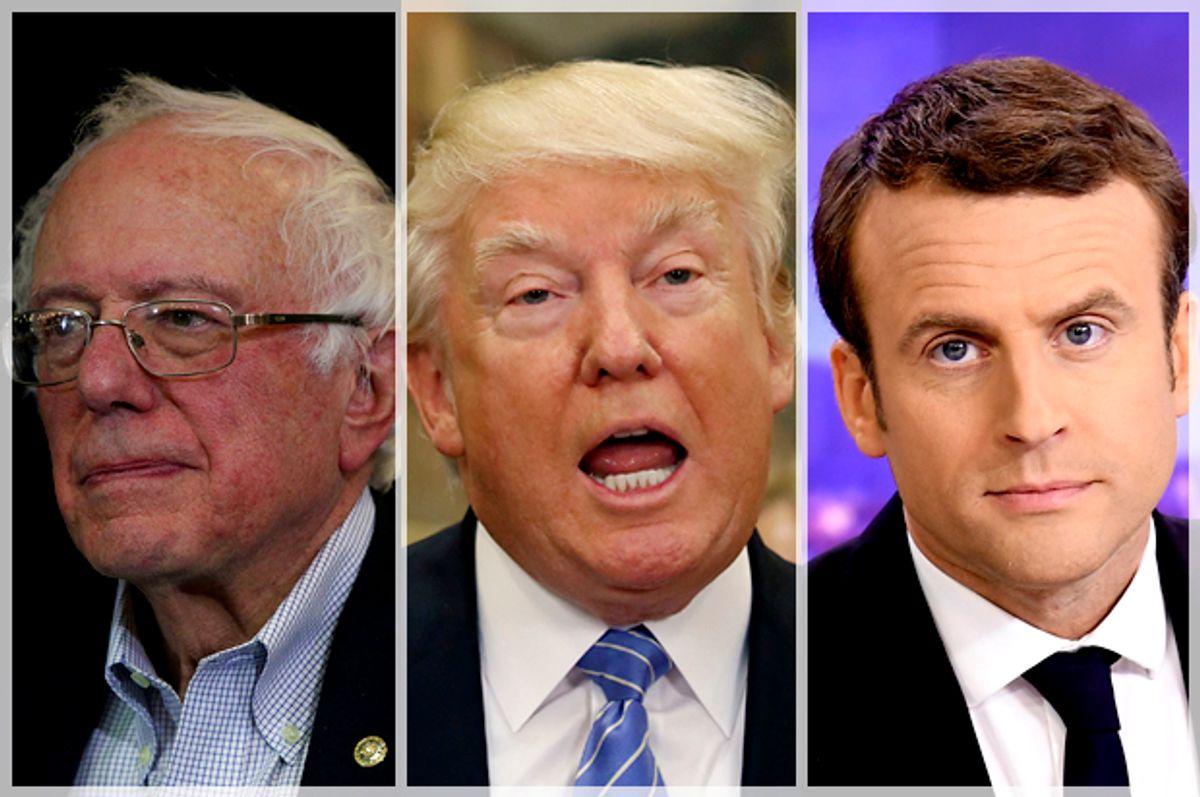 Facebook
Twitter
Reddit
Email
view in app
As Republican politicians in Washington work tirelessly to throw millions of people off their health insurance, gut overtime pay for American workers, slash taxes for the wealthy and deregulate Wall Street and corporate America, it has become very clear after just 100 days that the Trump era will not be a golden age for the “forgotten men and women” of America, but for the billionaires and multinational corporations of America. President Donald Trump campaigned as a populist promising to “drain the swamp” but is proving to be a standard-issue right-wing Republican who ardently subscribes to the mantra of our plutocratic age: profit over people.

This was all predictable, of course, and the working- and middle-class Americans who thought that a billionaire huckster who has spent his entire adult life exploiting and conning people would represent their interests in Washington were sadly mistaken. The GOP has long been a party committed to serving the plutocracy and unleashing the psychopathic potential of capitalism, and over the next few years the sheer cruelty of our economic system will become increasingly evident.

It is more important than ever then for a strong and organized left to resist the right-wing agenda currently being implemented in Washington and across the country, while advancing a progressive vision offering a genuinely populist path forward for America. There are myriad causes to be fought for in Donald Trump’s America, and Republicans will continue working zealously to erase progress — whether it be undermining LGBTQ rights, criminalizing abortion or suppressing the vote. Each and every gain that has been made over the past century must be defended, but it is equally important to have an overarching cause that unites and galvanizes millions of progressive and working-class people into action.

This theme was recently broached in an article for the Nation, which featured several prominent progressives discussing a question that will inevitably be at the heart of any future popular movements on the left: What will bring about the end of neoliberalism — and what will replace it?

Neoliberalism is an ambiguous term that comes from academia and it has perhaps become too much of a buzzword used by the left to bash centrists. It generally denotes a political and economic ideology that has come to dominate most of the capitalist world over the past 40 years. David Harvey of the City University of New York, who wrote the seminal book “A Brief History of Neoliberalism” in 2003, has described neoliberalism as a “political project” that was launched by the “corporate capitalist class” around the early 1970s to curb the power of organized labor and dismantle the welfare state.

In essence, it was a counterrevolutionary movement that sought to restore the dominance of the capitalist class as in the Gilded Age. If it had a founding text, it was arguably the “Powell memo” — a pithy memorandum written in 1971 by Lewis Powell (who eventually became a Supreme Court justice) that called for businessmen of the world to unite and use political power “aggressively and with determination” and “without embarrassment and without the reluctance which has been so characteristic of American business.” That influential document, along with other writings (most notably by economists like Milton Friedman and Friedrich A. Hayek), inspired the corporate class to invest heavily in lobbying and political spending, as well as think tanks and other propaganda efforts to disseminate neoliberal dogma.

It is worth pointing out that there is a right-wing strain of neoliberalism that is fanatically pro-business (that is pro-corporate) and anti-labor and a more center-left variety typically espoused by centrist Democrats. The latter accepts the basic tenets of neoliberalism — for example, meritocracy, the efficiency and essential fairness of the free market, the virtue and sustainability of endless growth — while also providing lip service to workers and labor unions and exploiting concepts like racial and gender diversity to justify or distract from structural problems like economic inequality. This was cogently explored in Walter Benn Michaels’ 2006 book, “The Trouble With Diversity.”

As the Nation's article pointed out, it is uncertain at this moment whether the political left or right will succeed in creating a post-neoliberal future. Paul Mason, author of the recent polemic “PostCapitalism: A Guide to our Future,” argued in his contribution to that Nation article that there must be one big cause guiding the left:

Without ceasing to care about the 100 small causes that have animated us in the past, the one big cause that needs to animate us in the future is a systemic project of transition beyond capitalism.

Anther writer featured in that Nation roundtable piece, Joelle Gamble of the Roosevelt Institute, similarly argued that neoliberalism can be overcome if the left “decides to stop playing defense and organizes with the resources needed to build sustained power, breaking down the policies that perpetuate American neoliberalism.” Author Peter Barnes, meanwhile, made the case for the Nation for a universal basic income and universal health care.

It is open to debate what kind of reforms the left should adopt and prescribe for the future. But there should be little doubt that our current world, which is dominated by neoliberalism, is dangerously unsustainable and this must be overcome if we are to leave the planet habitable for future generations. Without radical reforms, ecological strain alone will undermine human civilization and leave the planet uninhabitable for the majority of human beings. Of course, mass unemployment and economic inequality could very well undermine society even before climate change does. In Martin Ford’s bestselling book “Rise of the Robots: Technology and the Threat of a Jobless Future,” for example, the futurist author explored how 21st-century technologies will likely prompt an unprecedented unemployment crisis in the not-too-distant future and potentially lead to a dystopian kind of neo-feudalism:

In a perverse process of creative destruction, the mass-market industries that currently power our economy would be replaced by new industries producing high-value products and services geared exclusively toward a super-wealthy elite. The vast majority of humanity would effectively be disenfranchised. Economic mobility would become nonexistent. The plutocracy would shut itself away in gated communities or in elite cities, perhaps guarded by autonomous military robots and drones. In other words, we would see a return to something like the feudal system that prevailed during the Middle Ages.

For those on the left, it will be difficult to not succumb to pessimism and despair in the age of Trump. Just defending the progress that has been made over the past century against right-wing extremists in Washington is a tall order. And at times it is tempting to cynically evoke Freud’s “death drive,” which propounded that humans possess an innate tendency toward self-destruction. But this kind of pessimistic and defeatist attitude is a surefire way to guarantee the far-right’s success and ensure a dystopian future for our grandchildren. To prevent this nightmare from becoming a reality, the left must not only lead a resistance but also a political revolution.

In this seemingly absurd age of late capitalism, where the struggle for a better world can often appear futile, it is worth recalling the reassuring words of the French philosopher of the absurd Albert Camus: “The struggle itself toward the heights is enough to fill a man’s heart. One must imagine Sisyphus happy.”