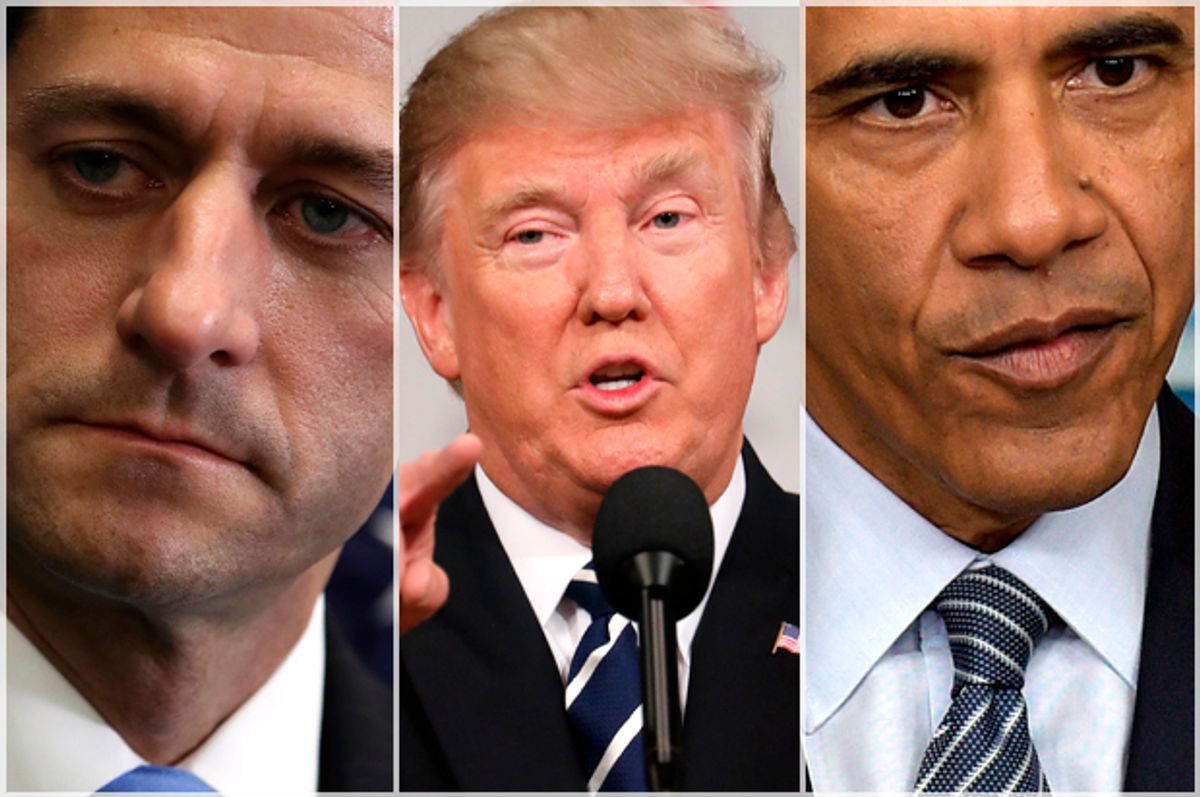 When the Affordable Care Act was signed into law in 2010, Republicans rushed to label the legislation a “job killer.” Yet the health care sector now makes up almost one-fifth of U.S. gross domestic product and is the nation’s second-largest source of overall employment -- about one in eight private-sector jobs. In fact, the health care sector has added jobs at more than three times the rate of the rest of the economy since the 2007 recession, including 20,000 jobs in April.

“One of my first acts as president will be to repeal and replace disastrous Obamacare,” Donald Trump said while campaigning at the Detroit Economic Club last August, arguing that repealing Obamacare would save “2 million American jobs.”

While Republicans have called the ACA a job killer since before it even became law, Trump’s specific claim about the loss of 2 million jobs appears to have come from a December 2015 analysis by the Congressional Budget Office projecting that Obamacare would shrink the labor force by about two million full-time workers over 10 years. The anti-Obamacare argument has pinpointed the employer mandate -- which imposes fines of $2,000 to $3,000 per full-time employee who isn't offered health coverage options -- as the impediment to job creation. However, as the CBO noted at the time of its analysis, the more likely culprit for the millions of fewer full-time employees and an increase in the voluntary part-time workforce is the decoupling of health insurance from employment made possible by Obamacare. The ACA allowed more people to stay home or work less -- to care for a family member, for example -- without losing their insurance.

Since the passage of the ACA, the ranks of workers who are part-time for economic reasons has come down by 40 percent, according to the Bureau of Labor Statistics, to 5.5 million in March 2017 from 9.1 million in March 2010. As Politifact reported last year:

All of the job numbers have moved in a positive direction since April 2010, the first full month after President Barack Obama signed the bill into law. The unemployment rate has moved steadily from 9.9 percent to 5 percent. The economy has added about 10.7 million jobs. And the number of working people who have part-time work but would rather have full-time work has fallen by nearly 3 million.

The Republicans’ repeal-and-replace bill, however, may already have slowed that health care-related economic growth.

“Providers and health systems may have already begun to slow hiring” in early 2017, according to a new report from the Altarum Institute, a nonprofit health care think tank. Altarum researchers found that the number of new health care jobs created in 2017 dropped to 19,000 per month. The 2016 average monthly job creation in the health care industry, by comparison, was 32,000. From 2014 through 2016, researchers found, the ACA actually resulted in a third of the sector’s job growth.

Furthermore, another new report from the Milken Institute School of Public Health at George Washington University and the Commonwealth Fund estimated that repeal of the ACA could cost almost 3 million jobs by 2021.

Trumpcare’s massive transfer of wealth from funding for so-called safety-net hospitals that cater to low-income Americans who have recently gained coverage under Obamacare to wealthy Americans in the form of a tax cut may result in giant cutbacks in hiring at hospitals. The Milken Institute predicted that Trumpcare’s funding cuts will lead to a deduction of gross state product across the country by $1.5 trillion between 2019 and 2023.

The health policy researchers said 1.5 million jobs could be lost just from ending the expansion of Medicaid under Obamacare. The massive cuts in Medicaid funding in the Republicans’ repeal plan are estimated by the CBO to cost more than $880 billion over 10 years. In New York, where large health systems like Mount Sinai Health are among the biggest private employers, officials have estimated that a repeal of Obamacare could shift more than $2.4 billion in costs onto hospitals and taxpayers each year.

But hospitals hiring in Trump country, where health sector growth has softened the blow from struggling industries like retailing or manufacturing, will also be hurt. As the New York Times recently noted, “while manufacturing employment has fallen nearly 40 percent in northeastern Ohio since 2000, the number of health care jobs in the region has jumped more than 30 percent over the same period.”

Job losses caused by Trumpcare won’t simply be restricted to the health care sector. Only about a third of the estimated 3 million job losses are expected to be in the healthcare sector. The remainder, researchers predict, will come in other industries as consumers have less disposable income to spend, as a result of higher health care costs with the elimination of generous government subsidies.

While the government reported Friday that unemployment was at its lowest point in more than a decade, the health care industry has been an engine for much of that hiring.  Researchers at George Washington University expect Trumpcare will have “widespread repercussions” on the U.S. job market.

"It's very challenging to plan for your future in an environment like this," said Beth Feldpush, senior vice president of policy and advocacy at America's Essential Hospitals, a group that represents safety-net hospitals, told Reuters in March. An analysis by Thomson Reuters found that Republicans’ threats to repeal Obamacare have shaken the municipal bond market, where nonprofit hospitals access capital. That sector has sold 36 percent less debt for new projects so far in 2017, compared to the same period last year, while the rest of the municipal market increased the amount of new money issued by 23 percent.

If Republican members should suffer a similar penalty for voting for the AHCA [as Democrats did for supporting ACA] — somewhere in the neighborhood of 15 points — it could put dozens of GOP-held seats in play. Some 33 Republicans won their seats by 14 percentage points or less in 2016; of those, 27 voted for the AHCA.