Whatever Flynn said to the Russians was "problematic in itself," Yates said — and the 18-day gap remains a mystery 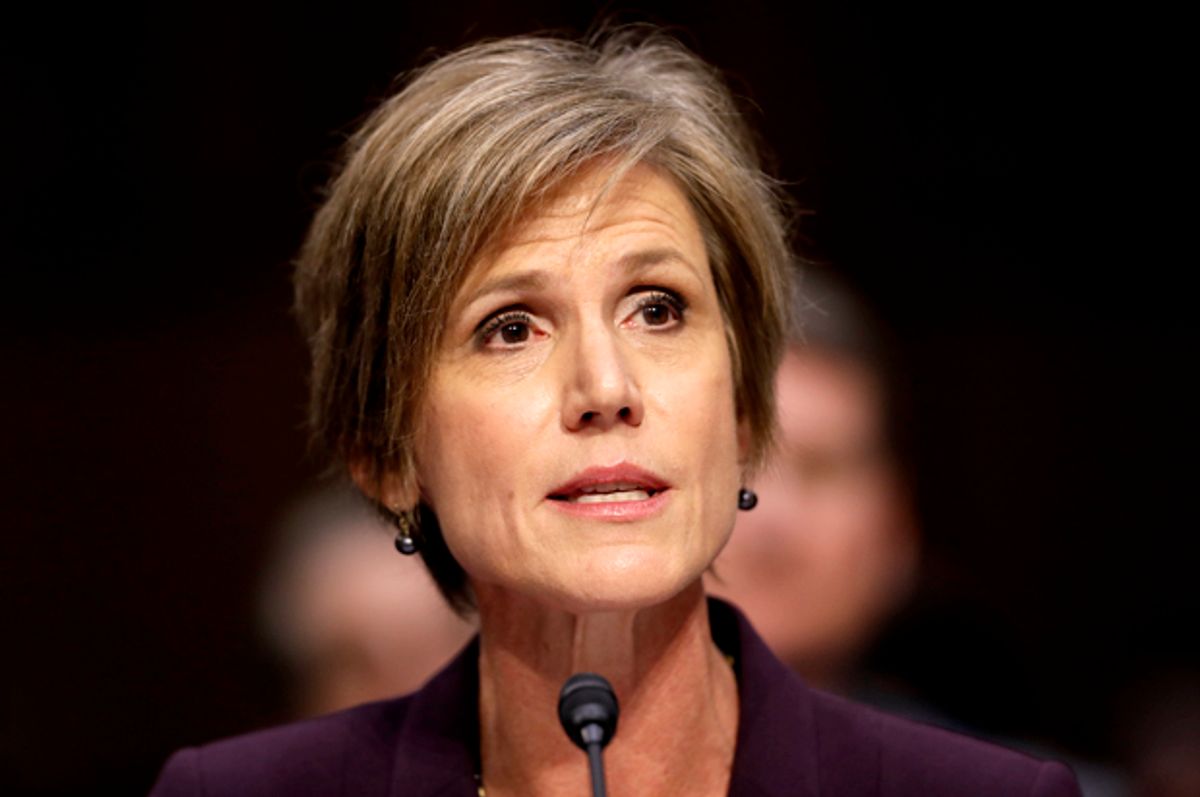 Forty-five years ago next month a White House conversation took place that will be remembered by history as the one containing the infamous "18-minute gap." That was the day after the Watergate break-in, when 18 and a half minutes of a recorded conversation between former President Richard Nixon and his top lieutenant H.R. Haldeman were mysteriously erased from a tape. It was apparently the first time they discussed the event and quite likely when they began to plan the ensuing coverup.

Many events pertaining to that crime were revealed over the course of the following two years, the story unfolding in fits and starts, but that gap remains one of the most memorable and mysterious of the details that finally led to the resignation of Nixon in August 1974.

Watergate history buffs undoubtedly heard the echoes of that famous occasion on Monday, when they heard the news media's repeated references to an "18-day gap" related to testimony by the former director of national intelligence, James Clapper, and former acting Attorney General Sally Yates before the Senate Judiciary Committee's Subcommittee on Crime and Terrorism. That's the length of time it took from the day Yates informed the White House that its national security adviser, Michael Flynn, had possibly been compromised by the Russian government to the day when President Donald Trump finally fired him.

The story is pretty straightforward. Yates met with White House counsel Don McGahn on Jan. 26 and 27 and had one follow-up phone call to inform the administration of the Department of Justice's concerns about Flynn. The Washington Post reported in February that McGahn then "immediately" briefed Trump on the matter. Nonetheless, Flynn participated in an hourlong phone call with Russia's President Vladimir Putin on Jan. 28, for which the official readout was brief and uninformative.

Yates was fired two days later, on Jan. 30, ostensibly for her statement that she did not intend to enforce Trump's hastily thrown together travel ban. Flynn, however, remained at his post for two more weeks, attending high-level meetings and listening in on calls with other foreign leaders. He was only let go after The Washington Post published a story that Flynn had discussed sanctions with the Russian ambassador during the transition period before Trump assumed office and allowed Vice President Pence to lie to the American people about it. The fact that Trump knew about this and also allowed Pence to continue to lie about it has never been adequately explained. As far as I know, he hasn't even been asked about it.

Yates' appearance on Monday didn't break any big news as she was unable to reveal any classified details in public. But it did clarify what motivated the Justice Department officials to take the steps they took. They were concerned because Flynn was lying and the Russians knew he was lying, so he had opened himself up to blackmail. As Yates pithily put it in her testimony:

To state the obvious, you don't want your national security adviser compromised with the Russians.

She is right. But that would assume that the only person who had been compromised was the national security adviser. Sen. Al Franken had some thoughts in that regard:

Is it possible that the reason that he didn’t fire him then was that, well, if I fire him for talking to the Russians about sanctions, what about all the other people on my team who coordinated? . . . That may be why it took him 18 days — until it came public — to get rid of Mike Flynn, who was a danger to this republic.

We have learned since Flynn's ouster that Trump's son-in-law and senior adviser Jared Kushner also had meetings with the Russian ambassador and Russian bankers. And we know there is an ongoing multiagency counterintelligence investigation of possible collusion by the Trump campaign with the Russian government, involving other Trump advisers and campaign staff. Franken could be right.

It's impossible to know what was in Trump's head so it also could be that he just liked Flynn and didn't understand why this information was important. But Yates' testimony hinted at something more about those contacts that are classified. She told the committee that she told McGahn that Flynn's "underlying contact was problematic in and of itself," which implies that it wasn't just the fact that he did it and lied about it. The suggestion is that Flynn said or did something in those contacts that would have been compromising.

In Trump's overwrought Feb. 16 press conference, when he announced the firing of Flynn, the president said, "When I looked at the information, I said, I don't think he did anything wrong. If anything, he did something right." He went on to explain that it was Flynn's giving incorrect information to Pence that was the problem. Clearly, Trump saw no problem with Flynn's "underlying contact," which would seem to be relevant to the larger investigation about possible coordination.

The Republicans on the committee behaved like the worst partisan hacks, for the most part refusing to even address the subject of the hearing and instead grilling Yates on the Muslim ban and ranting about "unmasking" procedures and leaks to the press, obviously following the White House line. Sen. Ted Cruz even asked Yates about Hillary Clinton's emails. Most of the Republicans on the committee didn't even bother to stay for the whole hearing.

Yates' answers about the Muslim ban were devastating to committee Republicans' cause and the rest of the yammering about leaks sounds particularly hollow when you consider the timeline that I just outlined above. It's quite clear that if nobody had leaked the information on Flynn to The Washington Post, an obviously unbalanced and possibly compromised man would still be the president's national security adviser.

Meanwhile, Trump behaved the way he normally does in tight situations. He attempted to smear Yates as the leaker in one of his notorious early-morning tweets. It was later deleted, probably after someone mustered the courage to tell him that he was threatening a witness, a move he probably learned during his days in the gambling business in Atlantic City.

Meanwhile, according to Axios, Trump has told his people to stop feeding negative stories about Flynn to the media. The official explanation is that Trump believes that Flynn is a good man, that the Russia story is "fake news" and whatever went wrong was Obama's fault. But one cannot help but wonder if Trump's lawyers might have reminded him that Flynn is shopping for an immunity deal and treating him disrespectfully might just loosen his tongue about things the president might not want him to say. Trump probably learned about that sort of thing from certain Atlantic City business associates, too.