There is joy in Morristown: Salon talks to Hank Azaria, star of "Brockmire" 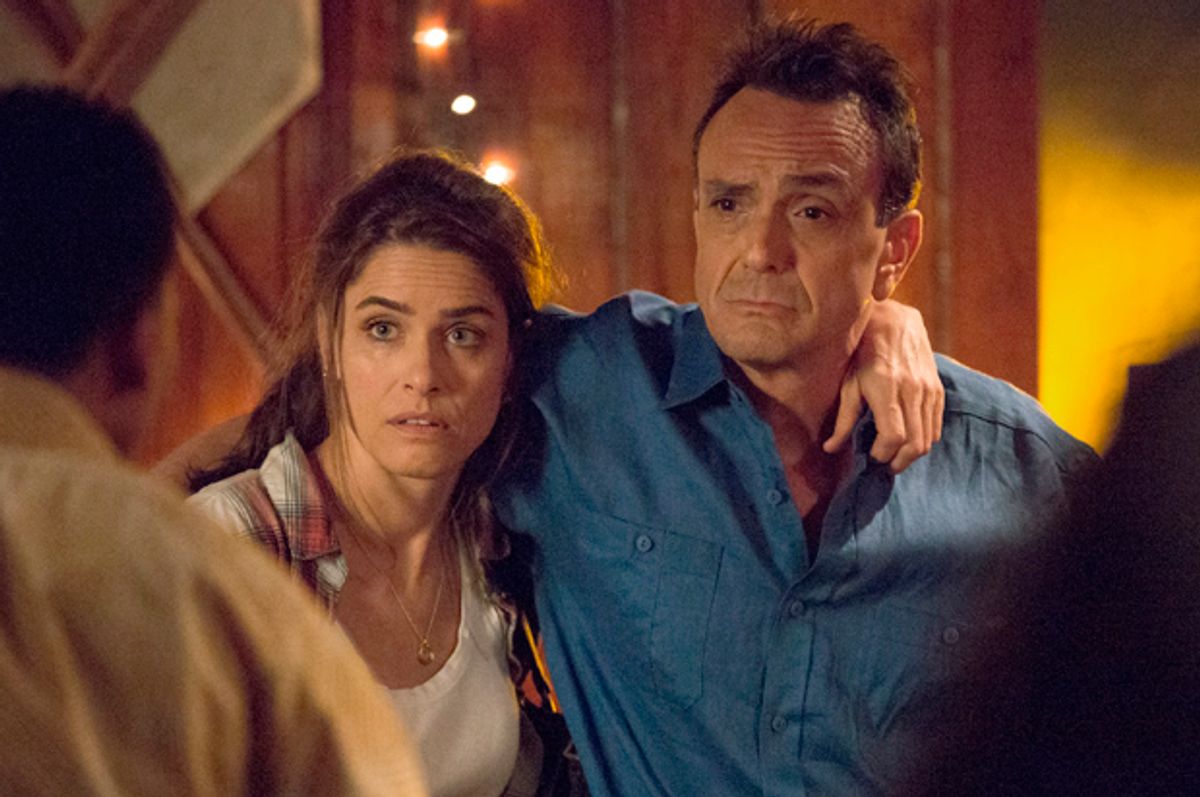 It takes guts — or is it balls?— for a series to slide headfirst into an abortion storyline six episodes into its freshman season. To play that plot for laughs while treating the meat of the situation with a mote of sensitivity, that takes skill and teamwork.

Incredibly enough, IFC’s “Brockmire” has been able to pull off said storyline in its “Road Trip” episode, as the show’s  Jim Brockmire (Hank Azaria) and Jules (Amanda Peet) confront Jules’ unexpected pregnancy and weigh whether the maybe-not-really-a-couple has any desire to raise another human being.

For the uninitiated, “Brockmire” follows misanthropic sportscaster Jim Brockmire, a baseball commentator for the Kansas City Royals, whose signature mellifluous on-air voice and habit of narrating nearly everything he rarely turns off. Brockmire was on his way to becoming a legend on par with Marv Albert and Phil Rizzuto until he had a career-ending meltdown on air after discovering his wife Lucy (Katie Finneran) was cheating on him.

Brockmire then disappeared into an alcoholic downward spiral, calling cockfights in Asia and starring in a Filipino rip-off of “Hart to Hart,” among other things, as he scrabbled through the dregs of his sanity. As the series began he lands, at long last, in Morristown, Pennsylvania, a place that the economic recovery sped right on by and mistook for road kill. There he is hired by Jules, owner of the town’s minor league team the Frackers, to call the games.

After screwing, per baseball superstition, to maintain the Frackers’ winning streak, Jules and Brockmire discover that they make a decent romantic pair. But anyone around them sees that they would not make decent parents. Following a fair bit of field research and soul-searching, each arrives decisively and separately at that same conclusion. So they travel to see a doctor in another state, receive medication to induce an abortion and somehow manage to botch that simple plan.

“Road Trip” manages to be simultaneously offensive, hilarious and oddly touching, and to explain the physical comedy portion of episode would ruin the gag. But it’s sufficient to say that every quality that makes “Brockmire” great runs the bases in that episode. Its irreverent, mirthfully indelicate narrative works because of Peet and Azaria’s outstanding onscreen chemistry. And like the rest of the season's episodes, that story would not have come off half as well without creator Joel Church-Cooper allowing his twisted imagination to fly free.

“The best part of this thing is the relationship, this really messed-up relationship between these two people,” Azaria said in an interview with Salon. “Amanda was really all over that, especially as it related to Jules and Jim. Just making sure there was an emotional and logistical reality to the whole thing. It really was key. It's like good farce.”

“Brockmire” is heading into the final two episodes of season 1, and to say it’s one of television’s hidden crude gems isn’t a soft sell. Nope, “Brockmire” is in a mine most viewers have yet to explore, although IFC is airing a marathon of the first season on Saturday starting at 9:15 a.m., as well as airing the entire season leading up to the finale next Wednesday.

The cable channel already picked up a second season of “Brockmire,” which must be heartening news for its relatively small fan base. Season 1 has averaged about 265,000 viewers a week — better than the initial outing for its IFC comedy cohort “Stan Against Evil,” whose season-wide audience hovered at about 186,000 but not as far reaching as that for “Portlandia.”

But in many ways, Morristown, Pennsylvania, the new home of Azaria’s down-and-out, unrepentant alcoholic of a sportscaster, more accurately reflects where America is today than the version of Portland, Oregon, as filtered through the lenses of Carrie Brownstein and Fred Armisen. The Rose City of “Portlandia” is twee and thriving. Morristown is a small burg that has had its guts and soul ripped out by a natural gas company that wants to destroy the Frackers, one of the only sources of joy the town has left. (The others are meth and binge drinking.) Random fires pop up in the middle of public spaces. The town drunk can kidnap a rival hamlet’s baseball coach without consequence. Living in Morristown is punishment enough: Why involve the cops?

“It's like this undercurrent throughout the season that is kind of political, but it's not really in your face,” Azaria said. “It's obviously not trying to preach anything about fracking or anything else. [Church-Cooper] comes at everything with great comedy and without sentimentality at all. But at the same time, I think he gives it some depth and relevance to what we're looking at right now in our country."

The unmentioned tragedy here is that a man like Jim Brockmire is the personification of Morristown. The place is a manifestation of the lowest low. To Azaria, who originated the character in a 2010 Funny or Die viral video, it was the natural next step for the character to take.

“A lot of it just came out of ‘What's rock bottom for a guy like this?’ And it would probably be walking around a place that just reeks of gas and is completely bought and sold by the fracking industry and pretty hopeless,” Azaria said. “You know, if it's not that, it's meth. And sadly, a lot of towns are actually in that state.”

“Brockmire” isn’t entirely nihilistic, however. If the first six of this season’s eight episodes have proved anything, it’s that even the lowest of circumstances do not get in the way of a robust second wind. Brockmire’s existential agony created one of the first and most lasting internet memes, after all, and the Frackers’ social-media guru Charles (Tyrel Jackson Williams) has transformed his tirades into GIFs and videos that have made him relevant again, even drawing the attention of a fictionalized version of public radio host Ira Glass and “This American Life.”

And in this week’s episode, he could get another shot at the big-time with the help of Fox Sports color announcer Joe Buck, one of the most hated figures in sports. Buck appears in the Funny or Die video, and returns for Wednesday’s episode as Brockmire’s sworn adversary. It could very well be that Azaria’s sportscaster is on his way back up that mountain.

The question is whether Jules and Morristown will be invited along for that ride.

"'Brockmire' only really works when he's happening in the real world, which informed everything that we did,” Azaria said. “It’s like you got to earn it. If you don't buy that this story's really going on, then he's just a guy sounding kind of funny.”