"The Late Show" gets the band back together on a crazy news day, but only the host and Jon Stewart spoke of Comey 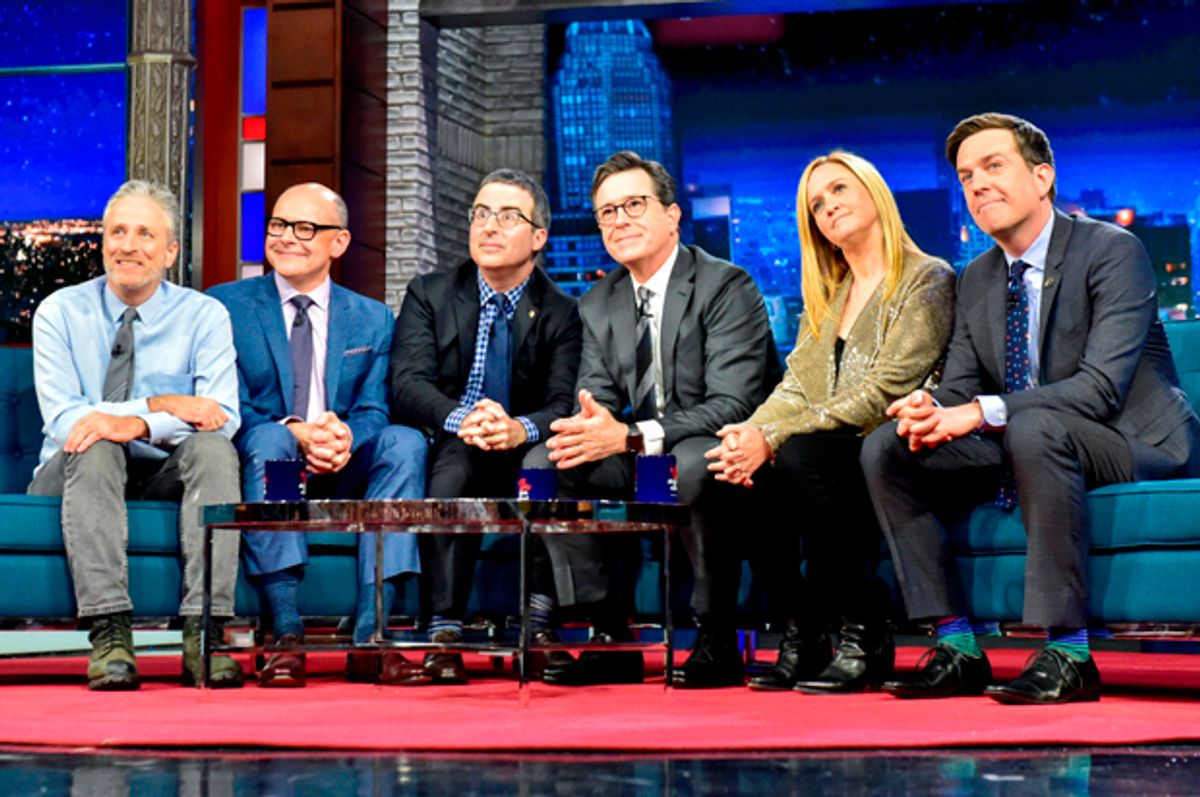 During Tuesday night’s broadcast of “The Late Show with Stephen Colbert,” Colbert’s guest Jon Stewart made an important point.

“For the life of me I do not understand why in this country we try and hold comedians to a standard we do not hold leaders to,” Stewart said. “It’s bizarre.”

To place this comment in context, Stewart was referring to the heat that Colbert sustained over the recent #FireColbert kerfuffle, stemming from the host’s verbal assault on President Donald Trump’s insulting treatment of CBS News’ John Dickerson. (Specifically, Colbert opined that the only thing Trump’s mouth “is good for is being Vladimir Putin’s cock holster.”)

But Stewart’s statement also serves as a tremendous reminder that sometimes our expectations for these entertainers may be unreasonably high.

The former host of “The Daily Show with Jon Stewart” returned to Colbert’s CBS late-night show along with former Comedy Central correspondents Samantha Bee, John Oliver, Ed Helms and Rob Corddry to participate in a May sweeps reunion episode.

The stunt was announced last week — long before the news broke that Trump had fired embattled FBI Director James Comey. Incredibly Colbert was able to refer to this alarming development in his monologue, revealing that it had happened 10 minutes before the taping commenced.

Of course, “Late Show” viewers watching that moment during the episode’s regular broadcast (11:35 p.m. on the East and West Coasts, 10:35 p.m. in the interior) had more than likely been inundated with details surrounding Comey’s dismissal for hours. The story topped every local and national newscast and dominated cable news.

Was it unreasonable to expect the legendary “best damn news team” to say a few things about this development? Aside from late night’s host emeritus Stewart, none did.

Instead, Bee, Oliver, Helm and Corddry joined Colbert for a comedically wan reimagining of what Colbert’s final day at “The Daily Show” looked like, circa 2005: Colbert sported a fake soul patch, Bee wore long permed hair partly tied back with a scrunchie (because Canadians were stuck in the '90s in 2005, I guess?). Corddry, a proud bald American, sported a retro-styled tufted wig with frosted tips. John Oliver portrayed Steve Carell, who is shooting a film and was unavailable to appear.

“I can’t believe you’re leaving right in the middle of the George W. Bush administration!” 2005’s Bee lamented. “There’s never going to be another president this good for comedy. I mean, this guy does something ridiculous at least once a month!”

Gauging from the audience’s laughter, the joke was either a hit or the Pavlovian reaction of a crowd in shock. Think about it — the folks in the seats were witnessing this skit a little less than an hour after one of modern history’s most significant and potentially democracy-imperiling political developments went public. The ramifications were still sinking in, in other words. But to watch later on during the news cycle was as anticlimactic as the crew’s merry journey through their classic “Daily Show” clips.

To return to Stewart’s observation, maybe it was unreasonable to expect anybody other than Colbert and Stewart to offer a response to the political explosions rocking the world outside the Ed Sullivan Theater. Each had built their careers on their ability to offer nimble rejoinders to whatever horrific turn of events drops into their laps.

But what has made Stewart and this specific team of people so memorable is the fact that during politically harrowing moments in the past, they granted viewers comfort and emotional release by serving us blunt, biting humor. The fact that the band got back together on the same day as a development some believe puts the United States on the precipice of a constitutional crisis was — dare we call it Kismet?

Yet all we got were a few wigs and looks at classic clips of “Daily Show” fake-news segments featuring Helms visiting a doctor’s office and Corddry walking the streets of Manhattan in a unitard. Even if one gives Corddry and Helms a pass (they’re movie and TV stars these days), Bee and Oliver have no excuse: Each of them hosts a political comedy series. Finding comedy in the gravest of situations is their stock-in-trade. Yet they were disappointingly silent on the issue.

Mind you, Bee and Oliver may have chosen to withhold their primo zingers to use on their own shows. The other side of that argument is there’s more than enough content to pummel here — not to mention the fact that relative to their nightly colleagues, they have many more hours to dream up fresh material. “Full Frontal with Samantha Bee” airs a new episode on Wednesday night, and with “Last Week Tonight with John Oliver” resuming on Sunday, Oliver has days to sculpt his jokes.

And on Tuesday night, the end zone was wide open. Neither “The Tonight Show Starring Jimmy Fallon” nor “Late Night with Seth Meyers” addressed Comey’s sacking at the top of their shows, which make them feel like repeats. That also proved that any morning’s talking points can become yesterday’s news in the blink of an eye.

If Tuesday marked the beginning of modern democracy's trial by fire, "The Tonight Show" and "Late Night" missed the drill.  Production of their NBC shows kick off at about the same time in New York as Colbert's: “The Tonight Show” is taped at about 5 p.m.; “The Late Show” tapings start at about 5:30 p.m., and “Late Night” is said to begin taping at about 6:30 p.m.

At the very least Stewart and Colbert addressed the Comey firing during a one-on-one conversation following the sketch. Colbert asked members of the audience why they cheered when he told them that Comey had been fired by Trump. “You know he’s investigating Trump’s campaign’s ties to Russia, which now will evaporate like cotton candy in the ocean,” Colbert reminded them.

Stewart, whom Colbert introduced as “a gentleman farmer,” jumped in to defend the members of the audience, saying, “That was like a beginner surfers' class, where they were like, ‘I’m standing up! . . . Oh no, wait.’”

That was kind of Farmer Jon, but it also speaks to the truth of Tuesday’s situation: Never has navigating the ocean of political news been so challenging for late-night comedy.

Even if Bee, Oliver, Helms and Corddry left us wanting, “The Late Show” writers and Colbert deserve credit for acknowledging the news at all, given their 10 minutes of notice. Over on Comedy Central, “The Daily Show with Trevor Noah” also riffed on Tuesday’s top headline, and good for him for doing so. Noah’s show, like Colbert, is filmed in New York City; taping commences at about 6 p.m.

The fact that he topped Tuesday’s episode with a mordant bit likening Trump to an African dictator speaks to an impressive ability to pivot on the fly.

All the New York-based hosts are at more of a disadvantage than Jimmy Kimmel, whose ABC series “Jimmy Kimmel Live!” is taped in the afternoon in Los Angeles. That gave him time to overhaul his monologue (“It was another crazy day in the United States of America,” he quipped) and design a “Comey Is My Homey” T-shirt.

“If you are one of the millions of Americans who are angry about this shameful and disgraceful move, send me $29.99 and I will use some of that money to send a very nasty letter directly to the Oval Office," Kimmel offered.

And this, at least, represented a noble effort. Stewart might say that’s all we can ask for. If we wanted more from his former “Daily Show” crew, that’s because of the high bar that he and Colbert and the rest set for late-night comedy over the course of many years. Their nostalgic gathering could not have happened at a better worst time.

And though the net result was somewhat disappointing, Colbert reassured Tuesday night’s viewers that he wasn’t done. “We’ll have more on this tomorrow, when they scramble to cover the whole thing up.”