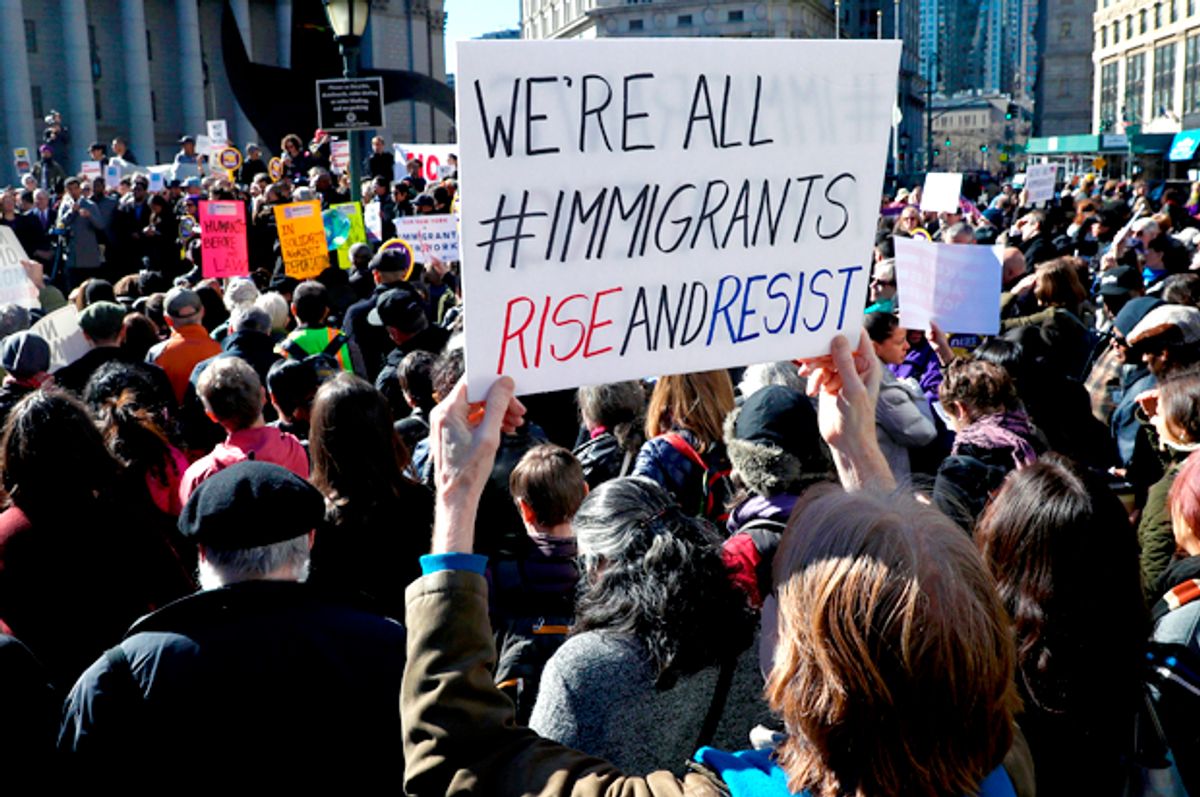 Gov. Greg Abbott continued his quest to turn Texas into a far-right dystopia on Sunday evening, when he popped up unannounced in a Facebook Live event to sign Senate Bill 4, an extreme anti-immigration measure that forces local law enforcement to work as de facto deputies of immigration officials, even if doing so undercuts crime-fighting priorities in their communities. The law also has a "papers please" provision that lets police grill any person they detain about their immigration status, even if that's irrelevant to the purpose of the detention.

As The Washington Post reported, Abbott's surprise signing is widely believed by opponents to be an effort to avoid the protests that were scheduled in anticipation of this bill's being signed. It's not just pro-immigrant activists that hate this bill, either.

"While supporters of SB 4 have presented it as a 'law and order' measure, the reality is different," Raul A. Reyes of CNN wrote in a Monday op-ed. "The Texas Major Cities Chiefs, the Texas Police Chiefs Association, and sheriffs from the state's largest cities all oppose SB 4."

The major point of contention between Immigration and Customs Enforcement and many local police departments is how to handle detention requests. Local police are often asked by ICE to hold a picked-up person who's suspected to be undocumented until ICE can investigate the individual's status. More and more police departments across the country are beginning to reject many of these requests, especially when it comes to people apprehended for low-level offenses who would not otherwise be jailed.

“The way ICE sends detainer requests to local law enforcement is constitutionally flawed," Domenic Powell, an advocacy and policy strategist for the American Civil Liberties Union, explained over the phone. “Essentially, ICE asks local law enforcement to do a favor for them and hold people without demonstrating probable cause."

Which can, among other things, mean that U.S. citizens are held in jail for no other reason than because ICE officials suspect that based on the apprehended individuals' ethnicity they might be undocumented. The Morales v. Chadbourne case that's currently working its way through the courts involves a woman who was naturalized in 1995 but found herself being held a full 24 hours after a judge officially released her from jail because ICE officials wanted to question her about her immigration status. Now Texas police departments who resist holding people without probable cause, just because ICE asked them to, could face punishment by the state.

Abbott and his supporters are framing this law as a ban on "sanctuary cities," a misleading term that falsely implies that municipalities and police departments are shielding undocumented immigrants from deportation. The reality is far more mundane. In most cases, local law enforcement is simply prioritizing its goals, instead of being deputized by ICE to enforce immigration law.

“A lot of local law enforcement — they’re not trained in immigration law. So they treat the detainer as some sort of evidence that the person is undocumented, and that’s often not the case," Powell said. As he explained, that creates legal liability for the police department. Federal courts have found that if local police hold U.S. citizens without probable cause, simply because ICE asked them to, those police departments can be held legally responsible.

Even more alarming is the "papers please" provision of SB 4, which the ACLU, in an emailed press release, said "gives a green light to police officers in the state to investigate a person’s immigration status during a routine traffic stop, leading to widespread racial profiling, baseless scrutiny, and illegal arrests of citizens and non-citizens alike presumed to be 'foreign' based on how they look or sound."

The threat of being pulled over and held by cops who think a person might be undocumented simply because of an accent or last name or skin color is so serious that the ACLU has released a travel advisory "informing anyone planning to travel to Texas in the near future to anticipate the possible violation of their constitutional rights when stopped by law enforcement."

Powell said, “To encourage racial profiling in this way, especially in this state, is incredibly dangerous." He added, "What this bill requires threatens fundamental constitutional rights and it threatens millions of people. It threatens people, regardless of immigration status. It threatens U.S. citizens.”

The law doesn't go into effect until Sept. 1, but Powell argued that its mere signing ends an encouraging signal to individual police officers who want to racially profile and harass Latinos. In addition, he worried — as do many law enforcement leaders — that legislation like this creates tensions between police and the community that can make it harder for cops to fight real crime.

"If people know that anytime they contact a police officer, there’s a possibility that it could lead to them being handed over to ICE and getting deported, they’re less likely to report crimes when they’re victims or to serve as witnesses," Powell said. "Many local law enforcement [individuals] have found that it’s much better for public safety to keep immigration [officials] at arm’s distance."

"The reality is that SB 4 would perpetuate instability by making it impossible for us to effectively direct and manage our deputies," wrote the sheriffs of the counties containing El Paso, Houston, Austin, San Antonio and Dallas in an April 18 op-ed for the Austin-American Statesman. "We cannot drive crime victims and witnesses into the shadows without undermining local public safety."

The issue so angered Houston Police Chief Art Acevedo that he went on Twitter late last month, saying, "some would rather men & women in blue go after cooks & nannies, instead of hardened criminals."

After being yelled at by trolls, Acevedo called an April 27 press conference to lambaste Texas Republicans for even considering this bill.

But the words of local law enforcement leaders fell on deaf ears at the state capitol. This is the age of Donald Trump, a candidate who squashed his Republican competition and won the presidential election by trafficking in racism and fearmongering over immigration. Abbott is up for re-election in 2018 and cannot be unaware that anti-immigrant bigotry is what the Republican base is clamoring for. So even though this indefensible law undermines effective law enforcement and encourages racist abuse, Abbott and Texas Republicans are going to defend it anyway.