The new act would not only put families in the crosshairs of a new GOP crusade, but at-risk LGBT youth as well 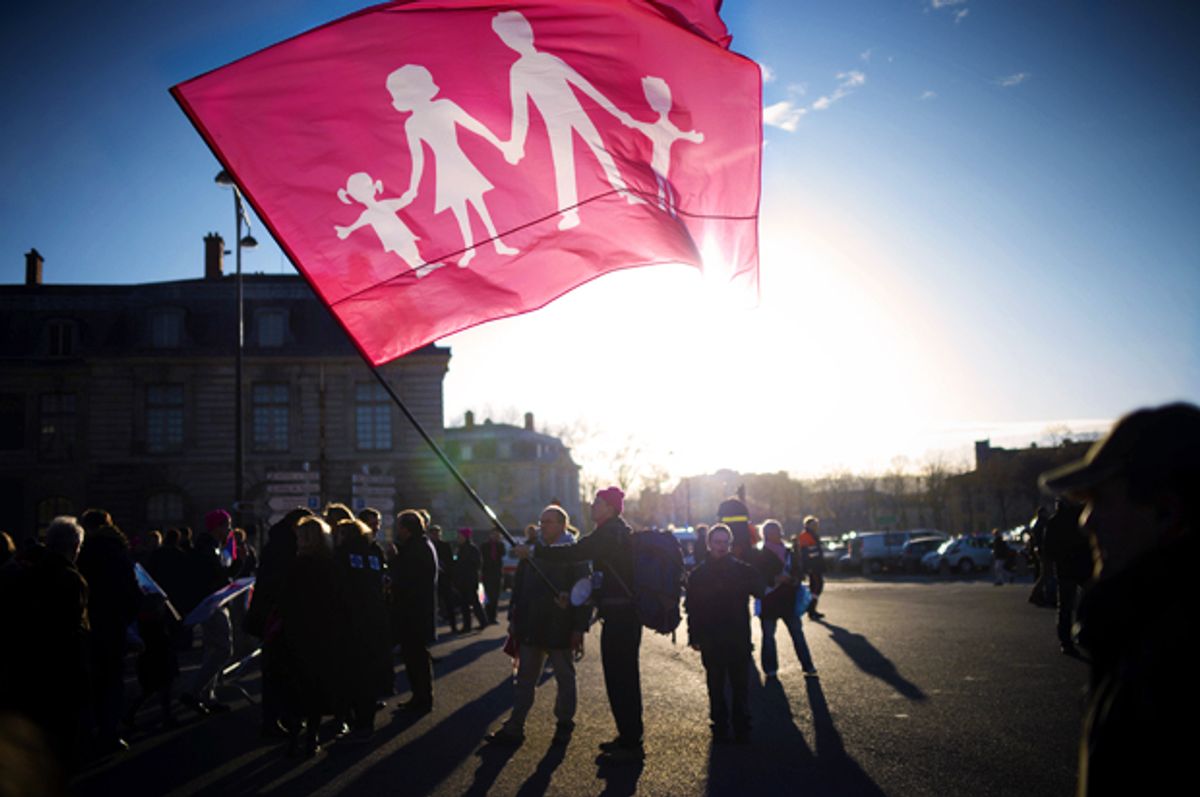 The Texas House of Representatives has become the latest state legislative body to pass a bill allowing adoption and foster care agencies to discriminate against same-sex couples after Alabama signed similar legislation into law last week.

Known as the “Freedom to Serve Children Act,” Texas House Bill 3859 allows state-funded child welfare agencies in that state to discriminate against prospective parents on the basis of faith. The legislation, penned by Republican Rep. James Frank, prevents the state from taking “adverse action” against any service provider that acts in accordance with its ,“sincerely held religious beliefs.”

The measure passed the House Wednesday afternoon by a vote of 93 to 49 after debate continued long into the night Tuesday. It now faces the state Senate.

According to experts, the act not only allows adoption and foster care agencies to prevent children from being placed in same-sex households but would permit them to subject youth to anti-LGBT counseling, including conversion therapy. Advocates in the state warned about a similar measure under consideration last year.

The passing marks a win for a fresh strategy from a Republican right that has yet to notch many anti-LGBT victories on its belt. Although the American Civil Liberties Union warned that over 200 pieces of discriminatory legislation targeting the LGBT community may fall under consideration this year, very few of those laws have or are expected to pass. The few bills that have managed to get through state legislatures each share a single intent: preventing the creation or support of families led by same-sex couples.

Cathryn Oakley, the senior legislative counsel for the Human Rights Campaign, warned that the LGBT community isn’t the only group that could be impacted by the passage of HB 3859. Oakley claimed that it would also target “single mothers” and “interfaith couples,” as well as prospective parents of a different religious background. For instance, a Christian adoption center could turn down a Muslim or Jewish family.

“Often what’s best for a child is to be placed with a family member,” Oakley said. “If there’s a loving aunt or uncle who is willing to step up but is LGBT, the child welfare organization can act contrary to the best interests of that child by denying the adult the ability to receive a placement.”

Although Frank has stated that the legislation, “requires the state to ensure that alternate providers are available to offer any services that a faith-based provider declines to provide due to religious conflicts,” people who work in the field have warned that nothing in HB 3859 specifies how that process will function. Suzanne Bryant, an adoption rights attorney, told the Associated Press, "Say you call an agency and say, 'I'm Jewish,' and it's a Catholic agency and they hang up on you. The bill says you can be referred to another agency, but there's no mechanism to set that up."

Alabama Gov. Kay Ivey signed into law an analogous bill last Thursday, but that legislation, House Bill 24, was much narrower in scope. The Alabama bill applied only to foster and adoption care agencies that don’t receive taxpayer money. The Texas legislation seems to also offer exemptions to state-funded agencies. CNN reports that a quarter of care centers would be impacted by the bill.

What’s equally distressing for advocates is that the bill may leave LGBT youth open to discrimination. A 2016 report from Houston Press estimated that there are currently 12,000 children who need placement in the state’s foster system, one which has faced frequent allegations of mismanagement and abuse. A 2010 lawsuit filed by Children’s Rights, an advocacy group based in New York, claimed that the Texas Department of Family and Protective Services was only successful in identifying cases of child abuse 25 percent of the time, a very low accuracy rate.

This bill could only make that problem worse, as Oakley explained. She pointed out that if an eight-year-old trans child were to ask to see a gender-affirming counselor to help them come to terms with their identity, a foster parent or adoption agency could say no under HB 3859 if they feel it violates their own religious beliefs. The San Antonio Current warned, before passing, that the bill could lead to greater numbers of LGBT children being sent to therapy to change their orientation.

“If an agency cannot place the needs of children first, it should not be caring for children,” says Jenny Pizer, the Policy Director for Lambda Legal.

Although Texas is the sixth state to pass a law limiting the adoption rights of same-sex couples, it is the third to do so this year. South Dakota passed a similarly sweeping law in March, following anti-LGBT child welfare bills in Michigan, Virginia and North Dakota. But if these laws are becoming en vogue in 2017, as they seem to have done what other Republican efforts to curb LGBT rights have not: pass. Advocates warned that SB 6, a bathroom bill identical to North Carolina’s HB 2, would be the major threat to queer and trans people in the Lone Star State, but that bill is stalled in the state’s House of Representatives.

Even as other legislative pushes to target the LGBT community fail, bills attacking same-sex families keep continuing to slip through the cracks.

Tennessee Gov. Bill Haslam signed a bill on Friday that advocates believe is a thinly veiled swipe at same-sex couples in the state. House Bill 1111 proclaims that all “undefined words shall be given their natural and ordinary meaning.” The bill, which was coauthored by Republican Reps. Andrew Farmer and John Stevens, continues: “Without forced or subtle construction that would limit or extend the meaning of the language, except when a contrary intention is clearly manifest.”

That language is pretty vague, but an earlier draft of the law was much clearer about its goal: HB 1111 targets words like “mother,” “father,” “husband,” and “wife” in the wake of the Supreme Court’s 2015 ruling legalizing marriage equality.

Originally put forward in January as Senate Bill 1085, the Family Action Council of Tennessee (FACT) claimed the bill was intended to clear up definitions around parentage following Obergefell v. Hodges. “When we say husband, we mean a man,” said President David Fowler in a speech posted to YouTube in February. “When we use the word father, we mean a man. And this is an attempt to tell the court...  when we use a word, we mean for it to mean what everybody thinks it means. And if that word makes the law unconstitutional, so be it." FACT, which equates homosexuality with adultery and pornography addiction on its website, has boasted that HB 1111 “actually broader” than its antecedent.

What exactly does the law do, though? Pizer said that, unfortunately for the bill’s sponsors, this law has almost no real power. Because Obergefell v. Hodges remains the law of the land, the federal government has the sole power to define the terms of marriage, and any attempt to contravene those terms will likely be met with a lawsuit. Instead she argues that that the harm of laws like HB 1111 is that they “create confusion.”

“This new statute did not accomplish anything new,” Pizer claimed. “There’s a real likelihood that the passage of this bill in the law will be taken as an invitation by some people to discriminate. People will misunderstand it as granting a new kind of permission to deny legal protections and rights to same-sex couples and their family members.”

The fact that some may view HB 1111 as a green light for bigotry is of particular concern in a state where same-sex couples are not protected by nondiscrimination laws. Tennessee is one of 28 states where LGBT people lack protections in housing, employment, and public accommodations, and Chris Sanders, the Executive Director for the Tennessee Equality Project, said that this bill leaves them extremely vulnerable. After all, this bill is just one of several targeting same-sex families introduced in the legislature this year that would target same-sex families in Tennessee.

“With 95 counties and elected judges serving all of them, there’s just huge potential for LGBT folks to get a bad ruling somewhere along the way,” Sanders told USA Today.

Oakley said, though, that the purpose of the law isn’t about preserving the definition of marriage. She said there’s a clear pattern to these bills of going after the LGBT community in any way that the Republican Party can — whether it’s discriminating against trans people in bathrooms, targeting transgender children, or breaking up same-sex families. Republicans are throwing anti-LGBT bills against the wall, “to see which one sticks,” she argued.

“These lawmakers don’t care what way they go about it, but one way or another, they will find a way to discriminate,” Oakley said. “That’s ultimately what it’s about.”